Greater Spotted Eagles are large migratory raptors that live across Europe, the Middle East, Asia, and parts of Africa.They occupy lowland forest and forest edges near wet areas, including meadows, bogs, and marshes, along with river-valley woodland.
They are complete long-distance migrants, they winter in the Middle East, Southern Europe, Central and Southern Africa. The migration to Africa and back takes place mainly via the Bosporus Strait, the Middle East and the Nile Valley.
The greater spotted eagle arrives in Estonia at the end of March and leave in September, but individual birds can still be sighted in October.
Population is classified as vulnerable to extinction The suspected population numbers fewer than 10,000 mature individuals 2500–6600 pairs. There are appreciably 10 – 20 pairs in Estonia but half of them probably mixed pairs with LSE
The primary threats are habit degradation and habitat loss, human disturbance and
hybridization between GSE and Lesser Spotted Eagle (Clanga pomarina )
Description
Length: 59–71cm
Wingspan: 157–179cm (another source 130-180)
Tail: 23–27 cm
Weight : male 1.7-1.9 kg , female 1.8-2.5 kg up to 3.2kg
Colour: very similar in general to its closest relative the lesser spotted eagle, which shares part of its range. Adult has dark brown with slightly paler flight feathers. Underwing-coverts generally darker than flight feathers. Bands of white spots across upper-wing of juveniles.

Diet and Hunting:
Greater Spotted Eagles eat frogs, snakes and lizards, waterfowl, fish, insects, carrion, and small mammals up to the size of hares.
They hunt in flight, from a perch, or on the ground. They also steal food from other raptors, including other Greater Spotted Eagles
Nesting
GSE usually construct their nests themselves and inhabit them repeatedly on subsequent years, especially if not disturbed. Occasionally they use the old nests of other larger birds of prey (the common buzzard, the northern goshawk) or of the black stork.
Lays 1–3 eggs in a tree nest. As a rule, only one eaglet survives because of cainism.

Hey, hopes Tönn still arrives. He usually has been before Tiiu or am I wrong?
Top In earlier years he was back from migration around 6th of April. I fear that we will never see Tönn again.

Maybe Urmas knows more. The transmitter must be somewhere.

So apparently he followed his mother Iti, who perished in Turkey some years ago, into the eternal hunting grounds. May their shadows never fade.
Top

Urmas wrote on January 17:
There is no infrmation about Tõnn after Dec 23th. Local birdwatchers (like Mehdi) did look last location of Tõnn but no results, yet.
Urmas
viewtopic.php?p=774116#p774116
Top

Tiiu with a stick 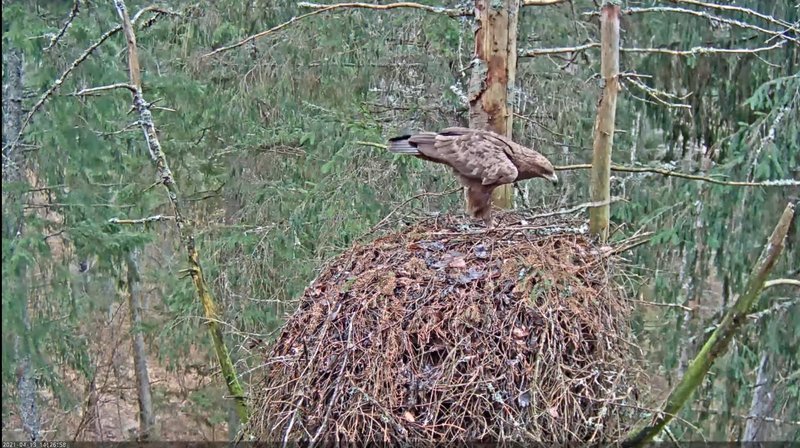 Tiiu is looking around 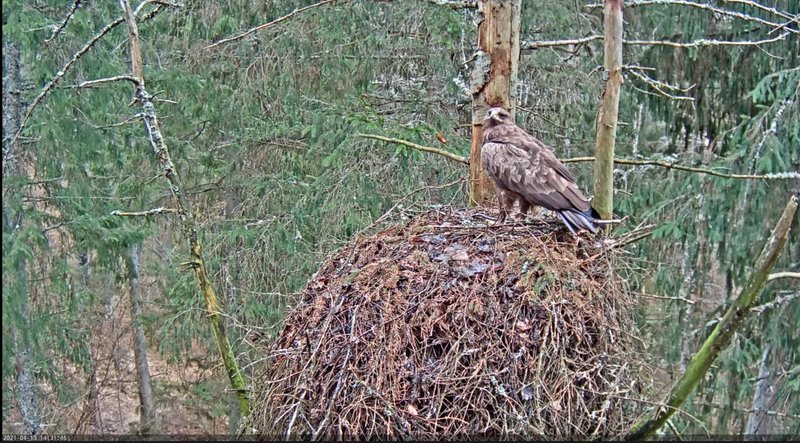 14:34
Tiiu flies away
*Only two things are infinite, the universe and human stupidity, and I’m not sure about the former.* Albert Einstein
Top

Karl the black stork disappeared also without any signal of the transmitter....I cant get it out of my mind....
Top

Syria is not the same with Spain, you know.
Top

Most likely, people would have seen Tõnn during his spring migration to Estonia. Usually birdwatchers making some photos of Tõnn every year. None of any photo has appeared this year

.
That's a not good sign at all, unfortunately.
Top

On the 3rd (December) I saw Tonn at Santa Agueda. Probably the last time I ever saw him as he disappeared off the radar on the 23rd, presumed shot by poachers.

http://www.finesystem.co.uk/birdwatchin ... hondo.html
There are also a lot of pictures of Tõnn in El Hondo since 2009
Top *Only two things are infinite, the universe and human stupidity, and I’m not sure about the former.* Albert Einstein
Top
Post Reply
802 posts