Discussion of any other birds and animals, anywhere.
Post Reply
105 posts

Like past years, Beleef de Lente 2012 hopes to follow pair of Common Kingfishers (Alcedo atthis) via a webcam. In 2011, we often saw the birds via the 2 outside webcams, but they did not nest in the artificial nest that had been equipped with a webcam with infrared lights.

However, this year the webcams have been placed at a different location where a pair has been breeding succesfully last season, in 2 artificial nests in an artificial "breeding wall" somewhere in Amsterdam (small park not open for visitors). One webcam has been placed in one of the 2 nestpipes, the 2nd (still) offers a view on the breeding site.

Image of outside webcam with entrances to the 2 nestpipes marked in red:

And right on the first day the cams went on line, at noon a male Kingfisher was spotted inside the nestpipe! Since then, he has been "at work" cleaning up the floor of the nest.

Last Sunday, 10 days later, for the first time a female Kingfisher appeared, which the male had attracted to the nest. It is great to see him try to lure her into the nest! On Tuesday, we saw him offer her a fish, but she declined. On Wednesday he was successful

AND ... she finally, after much hesitation, took a look in the nestpipe where he had been busy:

In order to understand more about the location of the nest of the Kingfisher (right in the middle of Amsterdam), check out the clip "Opening IJsvogellocatie" of 16.03.2012
at here
Top

Thank you Bosuil...nice to see you again.

Beleef de Lente has dropped their Kingfisher cam, but there is another interesting new Common Kingfisher project over at Natuurkanaal - select the cams "Broedwandcam" or "IJsvogelnest" (latest version of Silverlight is needed).

A Kingfisher male AND female have already been spotted inside the nest with webcam!

Yes! The Kingfisher pair finally chose the nest prepared with the webcam and
this morning, the first egg was laid! 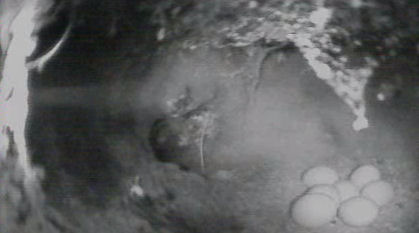 Change of the guard at the Kingfisher nest:

And for the 3rd time this season, a nest of young Kingfishers may be watched!

choose IJsvogelnest for the nest
choose BroedwandCam for the outside cam

Do take a look - they are a few days old now!

Today - parent arrives with too large a fish ... :

Also this season, NatuurKanaal has been lucky enough to have a pair of Kingfishers nest in their webcam nest !

choose IJsvogelnest for the nest,
choose BroedwandCam for the outside cam

Do take a look - 6 little Kingfishers hatched 12 days ago - this night they sleep alone in the nest for the first time! The parents have already started preparations for the 2nd clutch!

Common Kingfisher is Bird of the Year 2014 -->
and also Looduskalendar posts about the Dutch cams today.
Top

All 6 Kingfishers from the first nest (there had been 7 eggs) fledged on the morning of May 7 - lot's of clips can be found in the Dutch forum.

A summary made by Dutch forummember Pooh can be seen here:

Meanwhile, the stream has been switched to the prepeared webcam in another nest where the female was expected to start her 2nd clutch and indeed - she's laid an egg every morning since May 9:

This morning she laid the 6th egg
Top

Male arrives to take over shift - the 7th egg has been laid this morning:

9th day on the eggs:

A few more days and we might be able to see this again!

The eggs have hatched!


Feeding and chick vomits a pellet

to an artificial nest of a Common Kingfisher - this time in Wasbek, Germany. The chicks have been ringed recently.

Chick on the right just vomitted a relatively large pellet (encircled in red).

Thanks Bosuil. I have shared the links with others.
They are noisy are they not ?

Yes, very noisy - I had realised from watching the Natuurkanaal-webcam that they beg loudly!

Speaking about it, the Natuurkanaal-Kingfishers have started their 3rd clutch and were incubating before the 2nd fledged! Again 7 eggs:

The chicks from the 2nd nest fledged on Friday June 27

The Dutch Kingfisher-webcam is online this season as well: 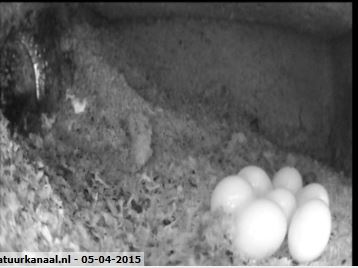 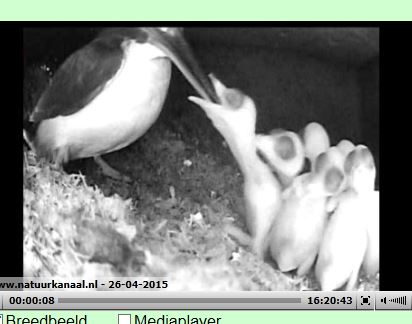