17:25 40 Excited birds in the left assembly. Little one, I think sparrows?

It's getting dark. But i think so.

No update for yesterday. I made an effort but with twelve hours to catch up ... I didn't have a chance.

Today is similar. But my husband watched for two hours and I got off work early.

Of course I meticulously searched for the morning call. Today too - no morning call. (Or scrambled?)
Well, maybe both the regulars and the advertisements suspend. The temperatures were very high winter again. My app says -15°C.

Tomorrow the temperatures will climb considerably. Only -2°C now.
But only for tomorrow. But the sun is already giving warmth.

The morning and forenoon were somewhat tense for me.
There were some interesting moments but I had to detach myself from them more quickly in order to move forward.

There was also a lot of flying in the sky along with angry crows. In general, the crows were very annoying again today.

They are annoyed and a rogue like me naturally hopes that our hawks are the reason. I am very sure that they are very close much more often than we realise.

I just remembered the hawk the day before yesterday. What a magnificent specimen... . For me a female. And it found its (safe) way through the nest tree. Or was it an instinct to defend it? Boka?

I'm thinking and writing too much again.

So, the catch of today's rage -


I watch the day go by while I cook. Currently I'm still winding at 14:42. There is still something going on.

Already now a loving and healthy day for all of you tomorrow!

Hello everyone and have a nice special day for you.

Here in the territory of the hawks it sounds today as if fronts have been clarified. The crows are terribly annoying today, even more annoying than usual and overall it's very loud and restless.
Let's start ...

Today very far away, hardly audible without headphones but very interesting.
07:54:25 juvenile voice (it remains open whether it is actually a juvenile Goshawk, a female with an invitation to the male or the jay. In combination with the adult voice, however, I think we have two goshawk that use different sounds. )
07:54:39 ​​juvenile
07: 54: 41/42 adult
07:54:53 adult
07:54:01 juvenile

Even if long videos aren't watched that much ... anyway.
(Headphones recommended)

08:42:43 A bird flies into the group of trees from the right. Meanwhile, I'd like to rule out a hawk. I cannot reasonably see it.

11:54:10 Bullfinches meet at the nest. A male on the edge of the nest. One further away from the trunk. A female comes and flies away with a male. The other remains. 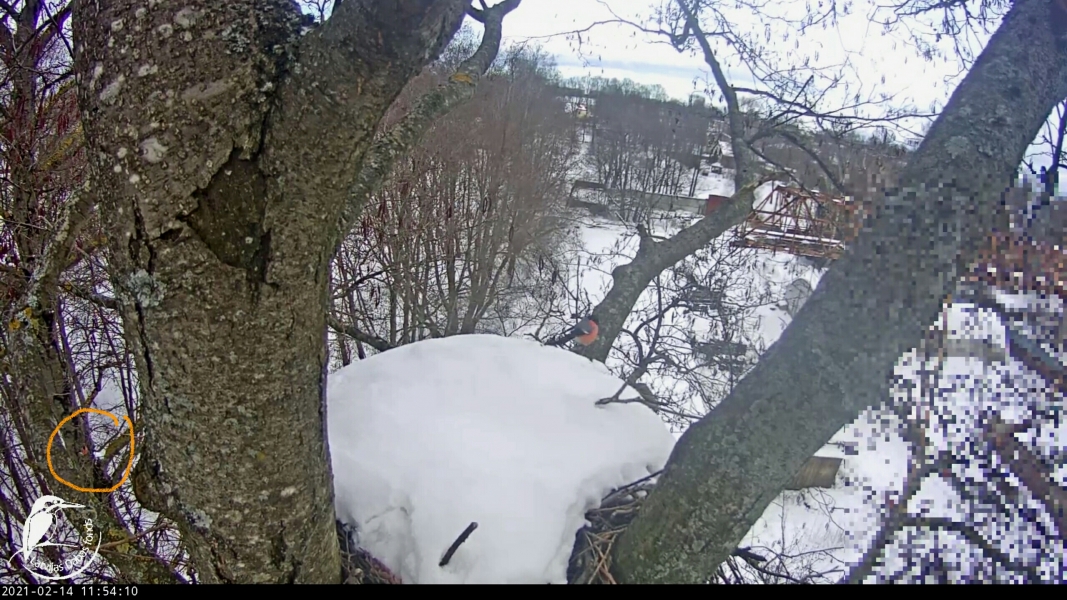 Nice to see you. With us they have become rare.

Do we have two calls from adults at the same time (especially in the latter timestamp)?

07:21:52 - 58 the morning call from a Goshawk
Before and after, as always, distinguishes the morning from crows.

I wonder whether it's about defending the new nest or defending the territorial borders. They are concerned here at the nest tree and often far away ...

10:58:48 -50 The Jay interrupts a crow's nagging with his own cool croak. Like crows, the jay is a good warning system for the presence of a goshawk for a long time.

12:31:05 Movement in the tree. Rustling, plucking ... landing? I exclude small birds like titmice or bullfinches. These are not that quiet.
"Let nature be your teacher."
(William Wordsworth)
Top

A different voice, a different Goshawk than usual.? At least in the first part.
I may be crazy too.

Hm, I wasn't sure whether to mention it ... but definitely interesting.

This shadow can mean anything. Shadows turn flies into elephants. But it drives away drowsiness and awakens the imagination.

Otherwise I haven't found much. In the meantime it was so quiet that I shook my headphones in panic.

I'm pretty tired now too. The day was long ... the night was short.
I am considering whether to continue documenting. Interest seems to be very low. I will continue to observe, but the trouble of documentation will probably invest in more time looking at the camera.

thank you for your observation, reporting, pics and vids 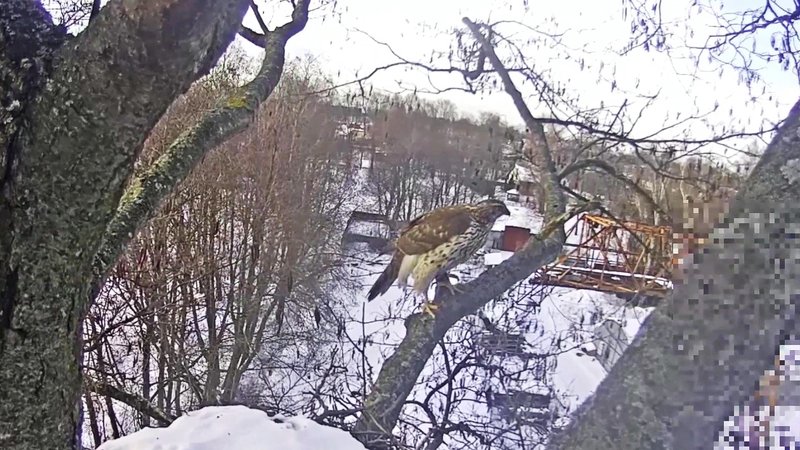 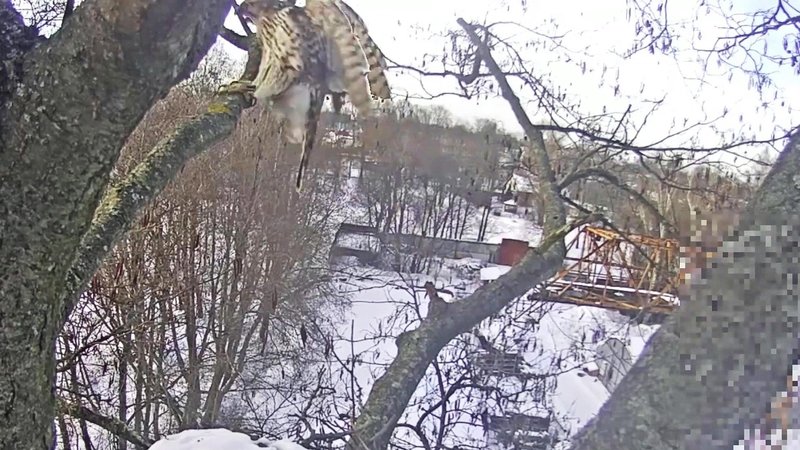 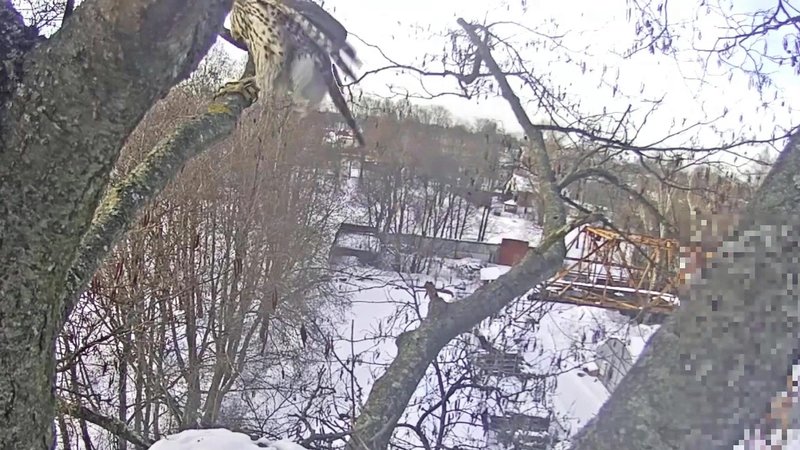 Polly, I don't think the interest is very low. It is more likely that no one says anything about your contributions. Not too much is happening at the nest yet. When the season starts there will be plenty of interest again.

Nice to read someone other than me here. Thank you!

For me there is something going on here every day. My notebook is bursting.

Just not yesterday. It was actually terrifyingly quiet yesterday. But the temperatures were around -20 ° C again in the last few days.

Thanks for the video dear Liz.
I also recorded the visit. Your pictures also show it nicely ... do you see the white under tail feathers? They are nicely set up. This bird is in courtship mood.

I suspect it is the girl, better the female. A98. I took a screenshot. The chest is very strong. At least at this moment. 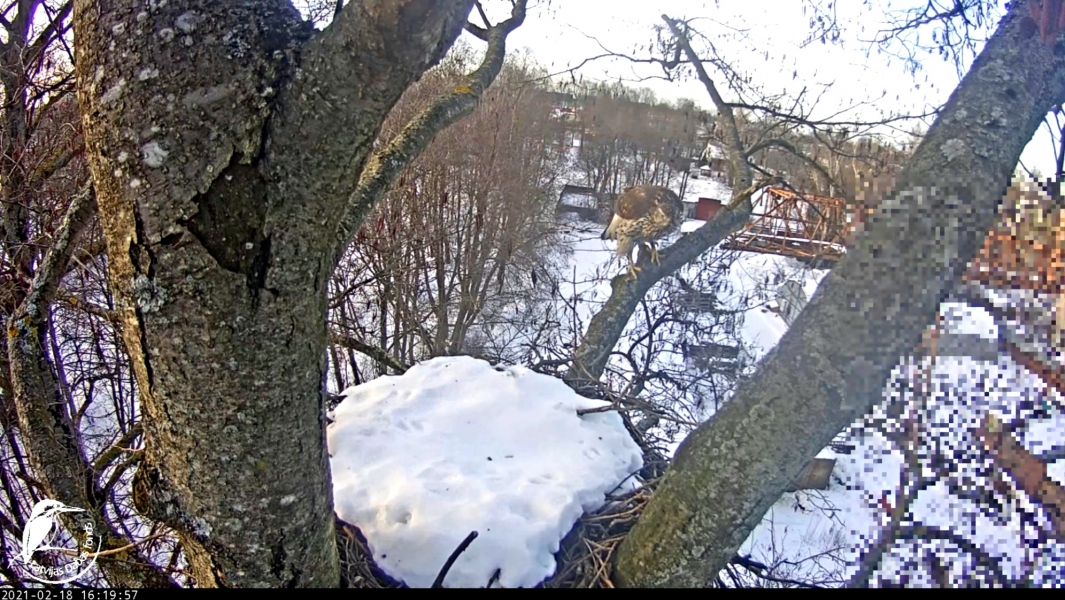 The visit was completely calm. This goshawk felt good. This teenager is no stranger to there.
Not a commercial visit for me. More of a feel-good visit.

And in 16:20:52 the 'Gjak' can finally be seen. It was the moment when the goshawk switched to the higher branch. Oh, I was really happy about that !!!

So far, I've only heard it, and I wouldn't have suspected that this sound was used by teenagers.


I have to look for something ... maybe someone can help.

It was February 16th.

At a great distance, therefore, it is difficult to hear.
Mating noises?


I have great trouble telling the gulls apart from mating goshawks. And there are so many seagulls there. All day.

On this day, too, the nest tree was the meeting place for the crows. I have no idea what their intentions are. I was uncomfortable with this crowd of crows. That rattle and croak ...

And far and wide no hawk to defend the nest tree, the nest.

I'm sorry, but the goshawk is wearing a juvenile dress. They too have such white feathers. In winter, when it's cold, you can see that particularly well. The adult has transversely banded feathers, the juvenile have teardrop-shaped feathers.

I'm also happy when someone else writes in the WTE thread. Perhaps the interest comes when eaglets are in the nest.

have a nice Saturday!

oh, then maybe i misinterpreted.
I have read that goshawks become sexually mature as early as the year after they hatch. More precisely - at 10 months.
So they still wear their youthful clothes, but they can already be in a breeding mood.

But of course, it can also be typical of a youth dress.
"Let nature be your teacher."
(William Wordsworth)
Top

Nesting failure
... Overall, males do not normally breed at any younger than 3 years of age (although they are in adult plumage by two years) and females can breed at as young as 1 to 2 years old, but rarely produce successful, viable clutches ...... 6–9 years of age seem to be the overall peak reproductive years for most northern goshawks ....
https://en.wikipedia.org/wiki/Northern_goshawk
Top

Liz, Hellem, thank you both. Learned something again.

I'm curious who we'll see next at the nest.
First about yesterday ... I couldn't manage the addendum yesterday.

It was a very busy day. At least acoustically at times very productive.

14: 05: 25/35 and then a few minutes further without any documentation, adult voice again

14:16 repeatedly cracking in the tree

Later I was busy outside. So I can't say how it went from here.

I suspect there were some malfunctions (maybe at this year's eyrie?). The goshawk kept sounding excited.
But all speculation on my part, loud thoughts.
Let's wait a while.

Have a wonderful Sunday everyone!

Yes, they can be heard. Definitely one.

All calls were easy to hear. Perhaps the wind also plays a role, but these calls sounded close and yet called softly.

Hm, does the stream buffer?
Oh yes ... the little ones also like to be at the nest today. They refine the chaos in the nest. 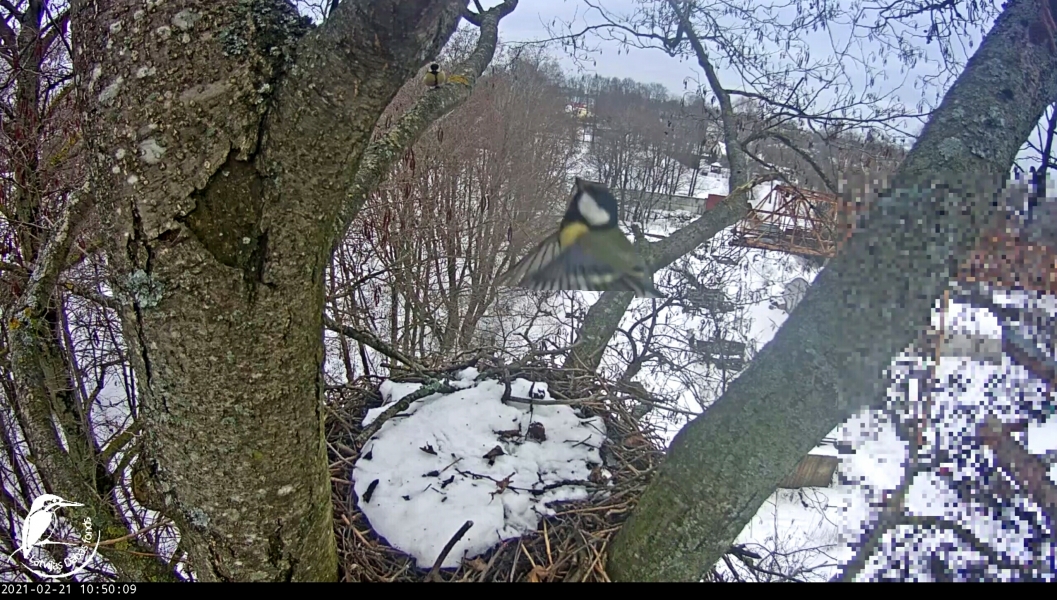