The last two years we had no luck with the Lesser Spotted Eagles on this nest. Eha and Koit, as we called them, alternate between two nests and 2014 they chose the nest not fitted with a camera. Last year was in general a bad breeding year for LSE, they started late on their return migration and arrived late in their breeding territories in Europe. Not all started breeding at all, our two among them.


A little bit about the history of this nest and the nest owners:

In 2008, the pair on this nest, now called Eha and Koit, did not produce eggs or young.
In 2009, Eha laid eggs on April 21 and April 25 and two chicks hatched. However, this species practices cainism, that is, if the older chick is doing well, the younger chick is not fed and does not survive. The older chick, called Spot, was banded and fledged from the nest. Spot was later found injured not far from the nest and was taken to a rehabilitation facility, where he was treated and ultimately released.
2010: "Our lesser spotted eagles didn't have success with their breeding this year"
2011: Eha and Koit started working on the nest but then moved to the new nest site and raised one chick successfully. Due to the change no camera witnessed it.
2012: The camera was moved to the new site. A "new Eha" and Koit had one egg on May 5 and the eaglet - "Kalev" hatched on June 13. On July 20 he got ringed and left the nest in August.
2013: Eha and Koit were already working on the nest when the camera started. Two eggs were laid, on May 3 and 7, two chicks hatched on June 11 and 15. Due to the species related behaviour called "cainism" (more information: viewtopic.php?f=53&t=590) only the older chick survived. It got the name Kai, was ringed (KY for Kai/Estonia and Matsalu 12614) on July 21.
Kai fledged on August 8
2014: the eagles showed themselves a couple of times, but finally used the other nest
2015: all over the distribution range of LSE the eagles came late from their migration and many of them did not breed at all, like our two eagle here


Please remember:
The birds and animals in front of the webcams are animals in the wild, in their natural struggle for survival. You have to be prepared for fight scenes with respective consequences! The operators of the cameras will very rarely interfere in nature's mundane hazards. Should 2 chicks, the younger chick will not be taken out of the nest and set back later!
“One can measure the greatness and the moral progress of a nation by looking at how it treats its animals” (Mahatma Gandhi)
"You can judge a man's true character by the way he treats his fellow animals" (Paul McCartney)

We had to wait a long time, the Latvian cameras started already a while ago and we met the owners of the two nests there already, but now finally it is time to announce the Estonian Lesser Spotted Eagles nest camera has also started!

The nest looks like already spruce branches have been brought, so maybe somebody has arrived already there. 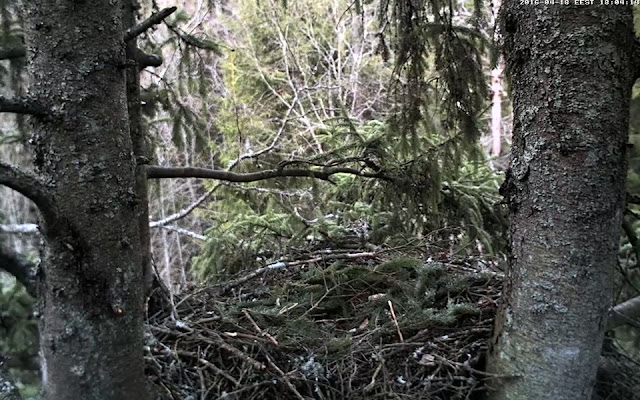 I'm keeping my fingers crossed that this year we will be able to see Eha and Koit raising a young eagle here again!
“One can measure the greatness and the moral progress of a nation by looking at how it treats its animals” (Mahatma Gandhi)
"You can judge a man's true character by the way he treats his fellow animals" (Paul McCartney)

Stream is still a bit shaky ... and it is very windy there.
“One can measure the greatness and the moral progress of a nation by looking at how it treats its animals” (Mahatma Gandhi)
"You can judge a man's true character by the way he treats his fellow animals" (Paul McCartney)

Ohhhhh - lets´s hope for the best - a new successful season!

I have been wondering about this nest, and here it is - thank you

And someone must have been working on it, since it´s fresh material in the nest.
Oh my, busy times

Thank you for opening this topic, Felis!

Like Lussi I've asked me, if there will breed a pair of LSE this year. As there is already a lot of fresh greenery in the nest, it looks very promising.

Lussi, indeed! But there's probably no way out with all those beautiful webcams.

Holiday for at least 2 months is necessary.

Felis, thank you so much for this thread.

hopefully it will be a good season. 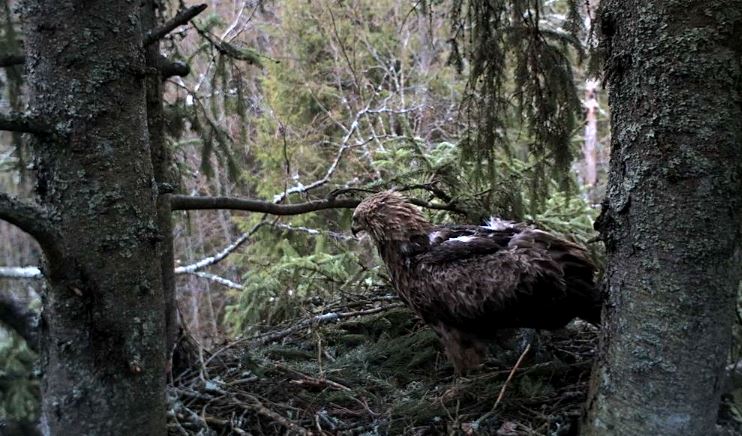 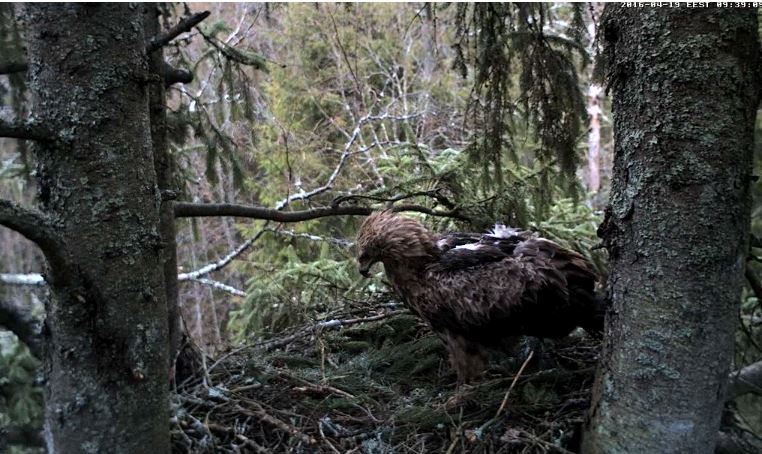 Juta, we saw it at the same time

her back feathers are ruffled

Nice that the nest had a visitor. I missed her/him being working at that time away from the PC.
Urmas wrote that on both nests are spruce twigs but he thought this one looked more promising. Just when they were about to leave a LSE came but left again. I think the LSE this year are making up for their late arrival last year.

So we have to keep our fingers crossed that Urmas' choice was the right one! 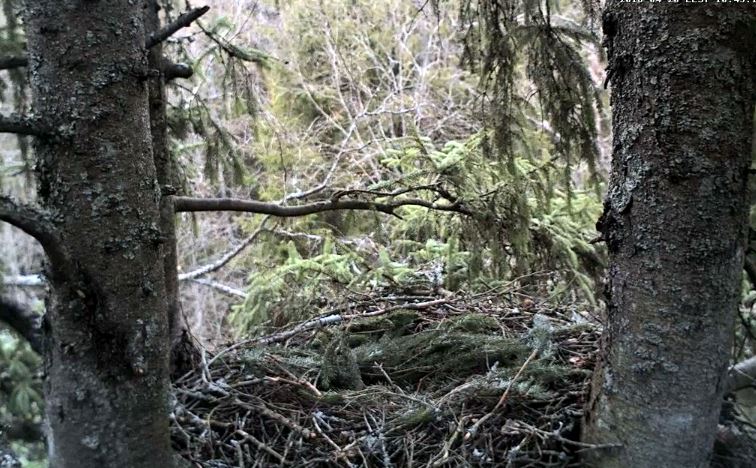 Felis, I crossed my fingers too

14:57
Another interested visitor? But already a bit late for this year, other Buzzard colleagues here are already breeding ;) 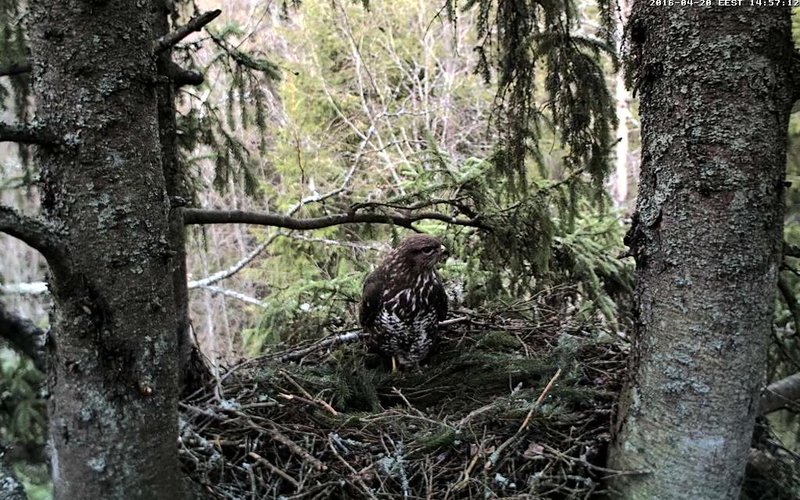 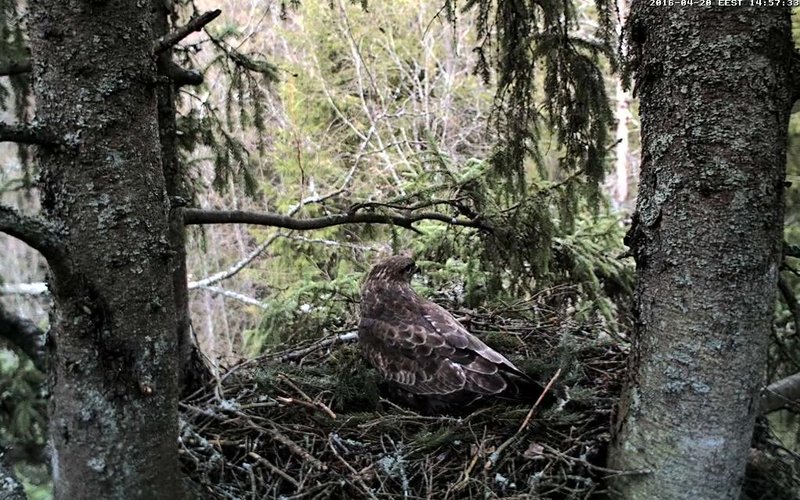 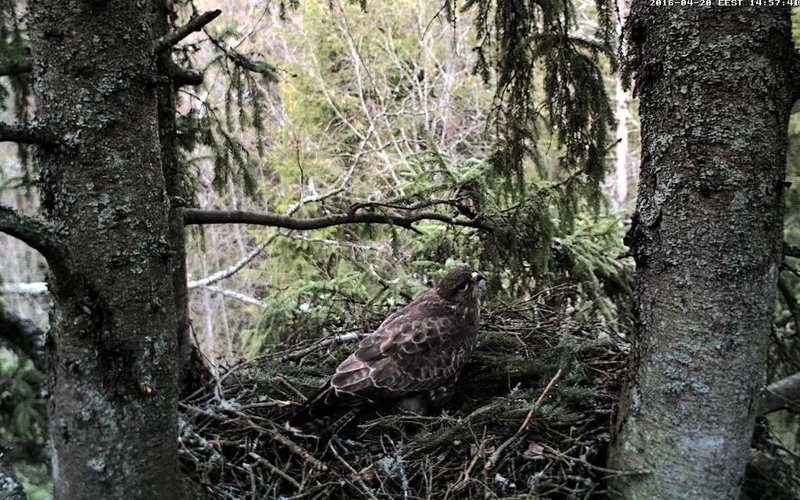 I didn´t get the landing on video, I had justed opened the cam when it flew in

Second buzzard cam instead of LSE?

Well, we had LSE in Black Stork nest, mallard in WtE nest, why not buzzard in LSE nest?

Musical nests ...
“One can measure the greatness and the moral progress of a nation by looking at how it treats its animals” (Mahatma Gandhi)
"You can judge a man's true character by the way he treats his fellow animals" (Paul McCartney)