Dear friends! I am looking for a real clear sound file (.ogg) of an osprey alarm call. Yes I admit, I want this as a very short ring tone for my mobile phone, when messages come in. I think and hope, I am not the only crazy one here, and someone of you can help me?

You're not the only one who suffers from a disease called ospreyitus, otherwise there wouldn't be osprey ringtones available on the internet (some for free, other cost a bit):

You are an angel! Thank you so much!
All the five files are not exactly that, what I am looking for.
They are too long or too soft.
I am looking for the sharp warning call, not longer than 2-3 seconds.
Meanwhile I found a file, which I put on my phone.
https://upload.wikimedia.org/wikipedia/ ... iaetus.ogg
But, as I said, it is not this warning call, I am looking for.
Ospreyitus is a very severe disease!

Maybe this list of osprey calls is useful? http://www.junglewalk.com/sound/osprey- ... C7A0hZS-po
Or this sound file: http://soundbible.com/1241-Osprey-Call.html


Yes, ospreyitus is a very severe disease, and there is no cure...but there is: A Further Guide to Osprey-Related Ilnesses (click link)

Oh, and seeing an osprey helps too. In that regard this Spanish webcam, which I discovered only yesterday, could help:

Janne+Ais wrote:... I want this as a very short ring tone for my mobile phone, ...I think and hope, I am not the only crazy one here...

Oh, that is really a delightful idea

, Janne + Ais.
I'm not at home since several weeks, but I think, I will take care of the osprey warning call for my mobile phone, too, in a while.

Then there are bound to be two or better three crazy osprey fans.

Kukelke, thanks for your great job

, to name the links!
Top

Great fun here. Thanks to Jeanne+ Ais & Kukelke for all the links.
Great idea & great variety of ringtones to chose from.

The soundbible I also detected meanwhile and saved it on my computer. Nevertheless: Thank you so much!
And this...

... is balm for the suffering soul! It is so good to know, that one is not alone with his pain.

Traffic On the Atlantic Flyway

A record-breaking number of Ospreys have been sighted in the Florida Keys this season. Here's why.

Bea wrote:A record-breaking number of Ospreys have been sighted in the Florida Keys this season. Here's why.

Probably the same reason why there are ospreys on Iceland right now. The first sighting was around September 24, a few days after there had been a very strong wind blowing from the southeast, all the way from mainland Scandinavia to Iceland. So probably migrating ospreys were caught in this wind, and blown off course.

Here's a video of a juvenile female osprey near the village of Siglufjorður on September 30:


Another video of probably the same bird on October 9:


And if that isn't enough; more reports of other ospreys on Iceland:

So there are 3 ospreys on Iceland now, perhaps even more, because Iceland is very sparsely populated and an osprey could easily go undetected.

Here are the official statistics of ospreys seen on Iceland from 1932-2002: https://notendur.hi.is/yannk/status_panhal.html

There was another sighting after that, in 2008 (https://notendur.hi.is/yannk/photos08_2.html):
Osprey - Gjóður - Pandion haliaetus
22nd for Iceland
Hafnarfjörður (SW)
22 September 2008
Juvenile.

Looking at the current weather and wind forecast, it's likely that they will be stuck for another week, if they haven't gone yet. From southeastern Iceland it's about 1100 km to the north coast of Scotland, and some 1300 km to reach the nearest Norwegian or Irish coasts... That's a long trip for juvenile ospreys, but juvies have flown such distances over open water before, more than once, so that's not the issue. Thing is, they need to fly into the right direction if they want to hit land; if not, they will likely perish over the vast North Atlantic... Fingers and talons crossed for these ospreys on Iceland!
Top

Kukelke Thanks a million for all that incredible news..

I have read it all. Now,I hope like you that the 3 or more ospreys find their way south before winter sets in. Fingers & talons but prayers too for them.

May I share the news elsewhere please ?
Carmel a member of SHOW .. I hope you love birds too. Its economical. It saves going to heaven.
Emily Dickinson
Top

Ofcourse you may share this news, macdoum. Otherwise I wouldn't have posted it on a public forum, but silently kept it for myself instead

forest officials last week arrested two Italian hunters had killed one osprey and a species of duck protected by law in the natural park of the Ebro Delta (Catalonia)
weapons were confiscated and were made available to the judge.
hope to condemn harshly murderers 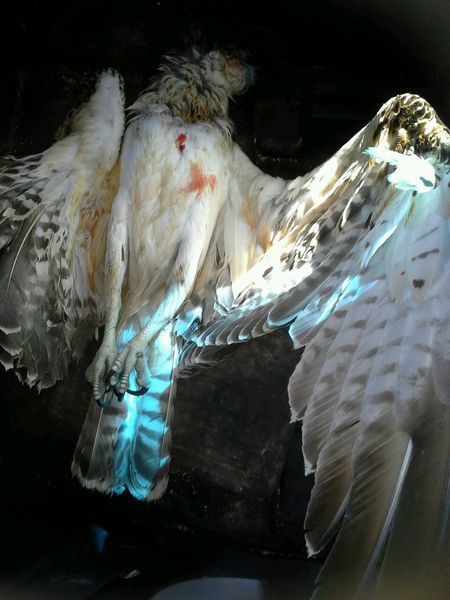 These are real bad news. Why do they do that? Do they eat ospreys? I don't think so.
Top

These are real bad news. Why do they do that? Do they eat ospreys? I don't think so.

I read the article, and my Spanish is not that good at all, but I got out of it that the osprey (and also a protected duck species) was shot inside an enclave which in turn is inside a nature reserve.
This enclave is owned by someone who keeps game-birds there, and eventhough ospreys are protected species also in that area, the game-birds are not during hunting season. And this osprey happened to be in this enclave where these two Italian hunters were shooting at legal game-birds. But the idiots should have seen that the bird they were shooting at was an osprey, not a pheasant or something like that, and acted accordingly...
Top

You've got it pretty well protected inside the park there is an area where hunting is legal, this is where the eagle and shot the duck, no excuse, a hunter must know what to kill and what not
should go to jail, and not allow hunting in any area of the park

Kukelke wrote:Ofcourse you may share this news, macdoum. Otherwise I wouldn't have posted it on a public forum, but silently kept it for myself instead

Thank you, Kukelke for posting that information and offering to share it. I just shared it with one of the big groups I belong to.

Some good osprey news from Germany:

The osprey hasn't bred in Schleswig-Holstein the last 130 years, but this year a nest was discovered and the pair fledged 3 chicks.

And good osprey news from Italy:

Some years ago there was a small osprey reintroduction programme in the Maremma reserve in Italy, and a few years later the first pair began to breed there. This summer a second breeding pair was discovered in another, nearby reserve, where they haven't been breeding for a long time. This second pair fledged 3 chicks.

Thank you for the good news, Kukelke. But it gives to many bad news. To much people are stupid and unhuman.
The nature needs us not, but we need the nature
Top