Live goes on - Aran took a fish from the nest to eat it on perch!
He will recover and fly strong again in some weeks. 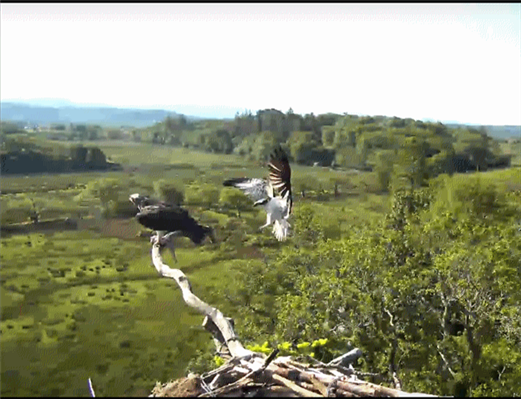 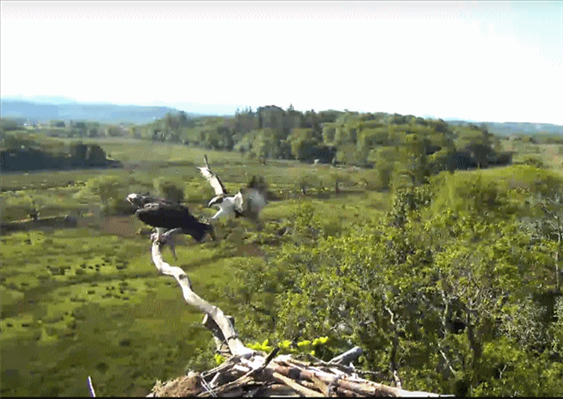 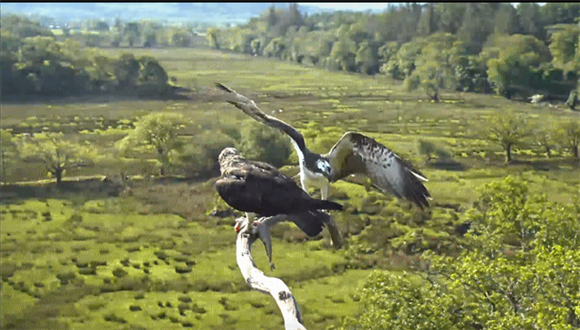 Strange behaviour of Mrs G: She left the perch & returned to the nest with a dead chick... 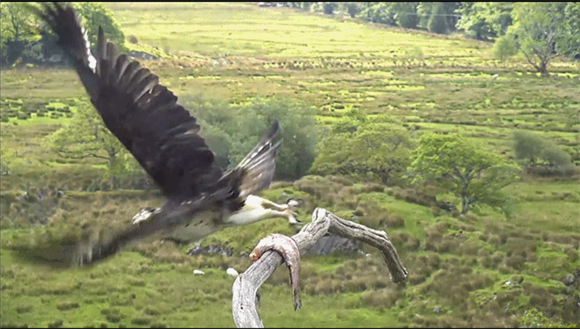 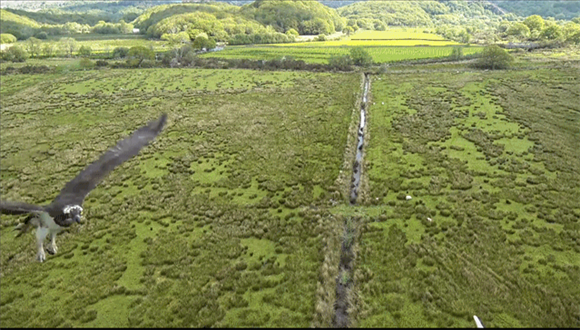 Mrs G took off again leaving dead chick and fish in the nest...? 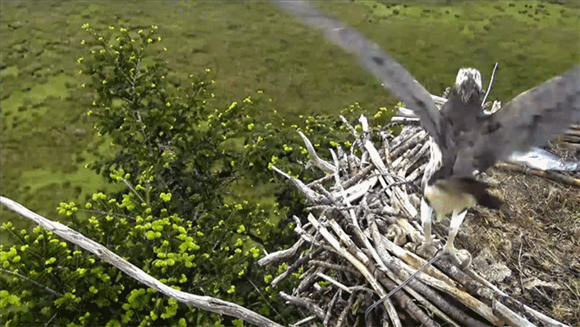 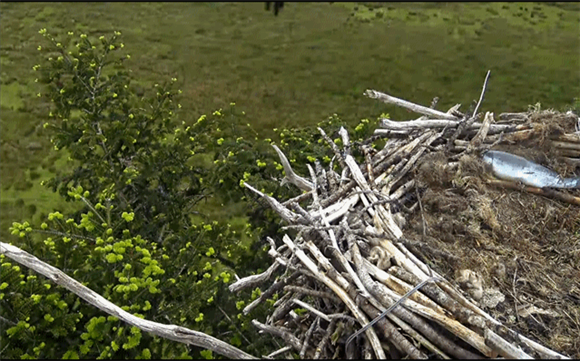 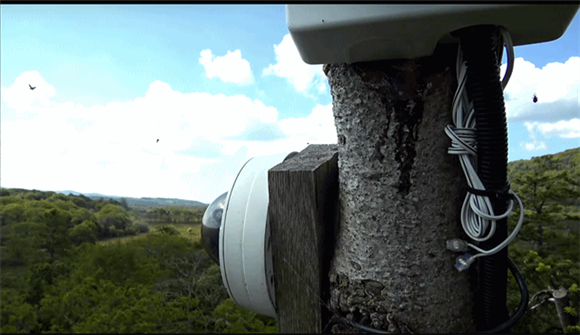 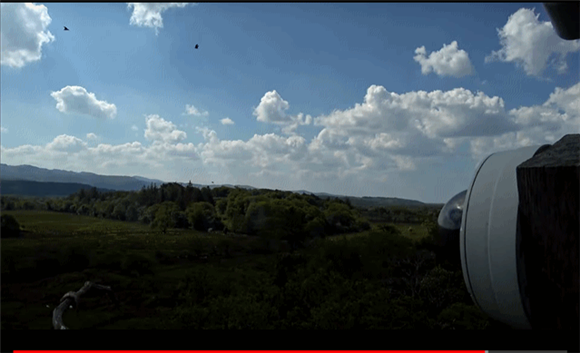 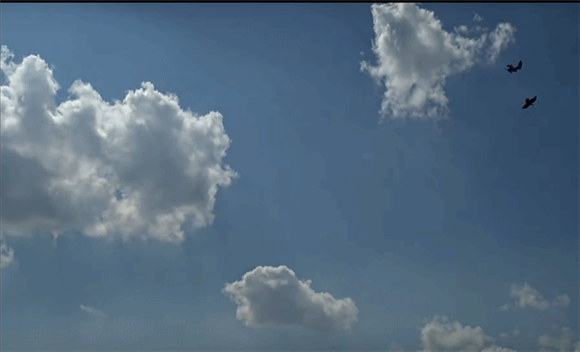 Lonley fish on perch bar...and the winner takes it all: ...

You won't believe it > fearless clever crow is the lucky one. Good job!

https://www.facebook.com/BywydGwylltGla ... 7371747171
There has been much speculation and we have received many questions since Aran was injured and the chicks were lost, so we thought the easiest way would be to write a blog explaining things as best as we can to our knowledge. We hope this answers your questions.
https://www.glaslynwildlife.co.uk/2021/ ... ect-storm/

Why did we not carry out a post-mortem on the dead chicks?

We know from the circumstances that lack of food was the cause of death in this instance. So, there would be nothing to be gained by carrying out a post-mortem on the chicks.

How do we think Aran became injured?

Although we cannot be certain exactly how Aran received his injury, we believe it was connected to the extreme weather conditions that we experienced on 20th / 21st May. Despite there being plenty of intruder activity in the valley in recent weeks, we saw no intruder activity on those days to suggest that Aran was injured in combat with another Osprey. Most times, we see the same individuals, such as KS6, KS7 and KS8 plus an un-ringed male that looks a bit like Aran. The damage that Aran has received to his wing is more consistent with being caught in something. Possibly fencing that was submerged in the flooding in the Glaslyn Valley or debris that was washed into the river and estuary.

https://www.facebook.com/BywydGwylltGla ... 354154934/
This is only the second time we have seen Aran fly from the nest with a fish in his talons, and this time it was a whole fish. We continue to hope this is a sign that he is getting stronger and gaining confidence.

https://www.facebook.com/BywydGwylltGla ... 2371903671
KS1 has been on the move again! Read about her antics in this blog from Kielder Ospreys. Does her behaviour remind you of someone?
Top

Why did Mrs G stop feeding the chicks?

Chicks are very vulnerable in the first few days of their lives. The yolk-sac of their egg keeps them sustained for the first 24 hours or so, but they then need regular feeding, as they are only able to cope with small amounts of food at a time. If they can reach 10 to 14 days old, they have a good chance of survival. Unfortunately for our chicks, the storm came at exactly the wrong time, the eldest one was four days old and the middle chick three days old. Precisely the time they needed food the most. The third chick did not hatch until the Saturday morning, so its food requirements would not have been so immediately desperate. The last fish Aran caught was delivered at 6.35am on Thursday 20thMay and there was only a small piece of tail left by late Thursday. Mrs G managed to find a few scraps to give the two older chicks at midday Friday, but they had no food available again until the early hours of Sunday morning. They had no food at exactly the time they needed it the most. The eldest chick’s food requirements would have been more critical than the other two chicks and it was not totally unexpected when it became the first to succumb to starvation.

Mrs G attempted to feed the chicks, but they were not giving the right signals. Animals operate by Fixed Action Patterns (FAPs), their behaviour is hard- wired to respond to external stimulus. As they got weaker the chicks were not reaching up and opening their beaks and begging for food, so even when fish was available, they were not being fed as they should have been because Mrs G was not picking up the signals from them.

Aran delivering fish to the nest is another FAP, he delivers fish and Mrs G feeds the chicks. This stimulus was also absent, even though fish was being provided it was not in the manner that Ospreys are programmed to respond to. 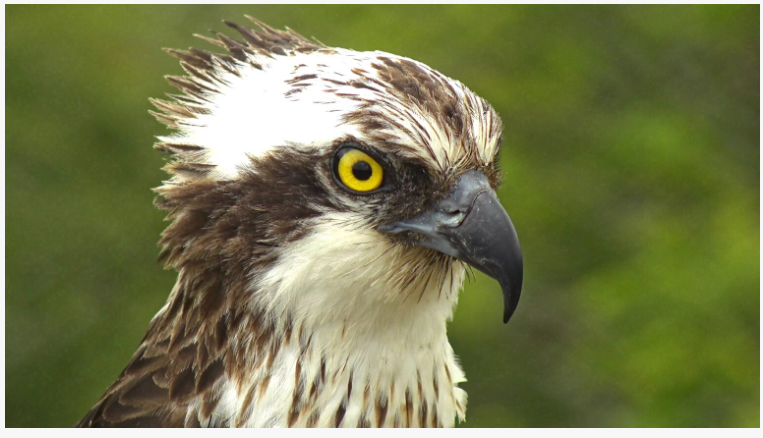 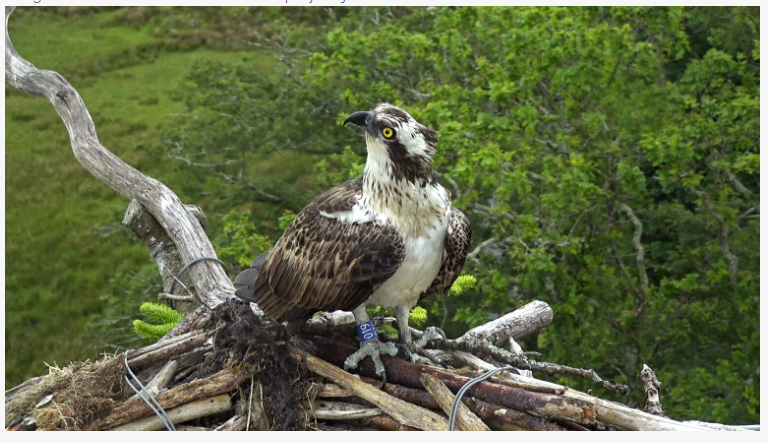 https://www.facebook.com/BywydGwylltGla ... 748676636/
Aran was again seen last night with a fish of his own; the second fish he has caught in as many days. The injury to his right wing is still clearly visible, but he is obviously feeling strong enough to begin fishing again. We'll continue to update you on his progress.

https://www.facebook.com/BywydGwylltGla ... 977593870/
We saw Aran on the nest today at around 05:45 before the live stream was on. He looked well as he defended the nest and chased after an intruder. We are also confident he fished for himself yesterday evening. He was seen perched on one of the trees near the nest with a fish which was not supplied by BGGW. Although progress may seem slow, this is another positive step towards Aran's recovery.

https://www.facebook.com/BywydGwylltGla ... 626073188/
We have some fantastic news to share about the Friends of the Ospreys Pont Croesor Nest.
Today it is day 40 since the first egg was laid and we now believe that a chick has hatched on the nest.
Top

https://www.facebook.com/BywydGwylltGla ... 3550114553
Mrs G and Aran have had to work hard today to defend their nest against intruders, which inluded KS6 (Dyfi 2018) and KS8 (Clywedog 2018). The Glaslyn pair have remained on the nest for some time this evening, with Mrs G food soliciting to Aran. Will he bring her a fish? She clearly wasn't satisfied with the stick he brought her!
We'll share a video for you tomorrow... once we've worked out what's what among the excitement! 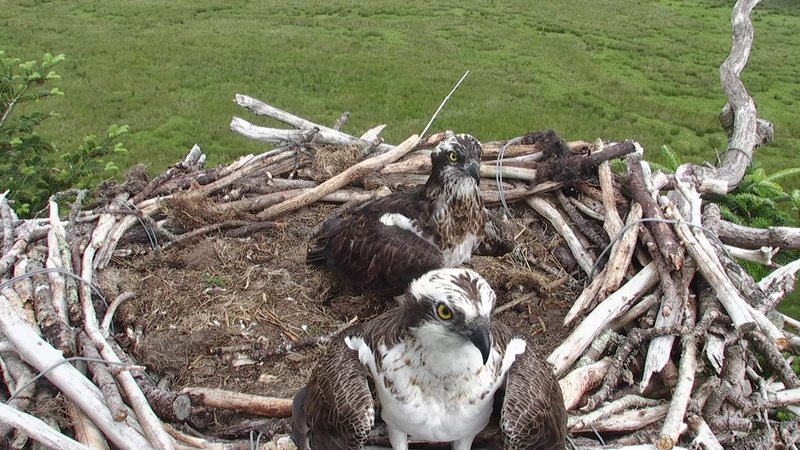 https://www.facebook.com/BywydGwylltGla ... 516320762/
Yesterday we saw three ospreys on the live stream - our regular visitor, KS8 (Clywedog 2018), and brothers from the Dyfi nest, Z1/Tegid (2016) and Z2/Aeron (2017). Z1 was divebombing KS8 off the Glaslyn nest, but showed no aggressive behaviour towards Z2. They are unlikely to recognise each other as brothers, but they clearly saw KS8 as an intruder and worked together to remove her from the area.
It was an exciting ten minutes for viewers after a quiet few days on the nest!
Top 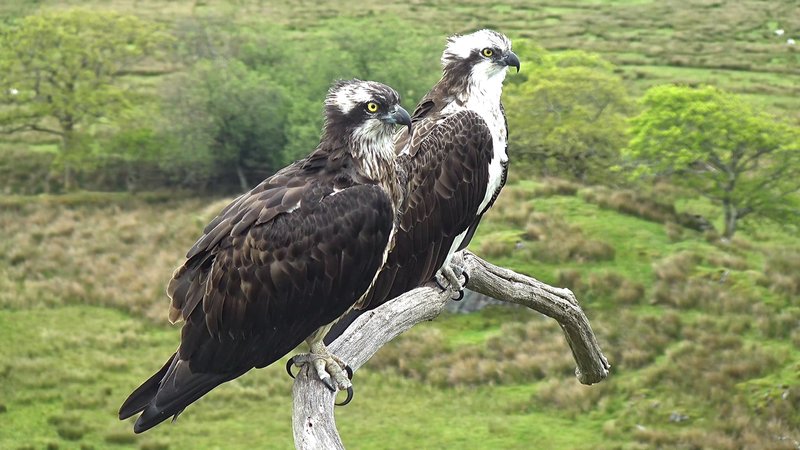 https://www.facebook.com/BywydGwylltGla ... 300535119/
It was nice to see Mrs G on the perch this afternoon. She stayed there for nearly an hour and a half, despite the rain.
Top

https://www.facebook.com/BywydGwylltGla ... 251859187/
Aran came to the perch last night with the biggest fish we have seen him catch since his injury. It was clear that he was keeping an eye out for Mrs G in order to share his sea trout with her, but he didn't need to worry as she landed with an even bigger mullet for herself! No need to rub salt in the wound, Mrs G!

https://www.facebook.com/BywydGwylltGla ... 326168975/
Aran has provided Mrs G with a fish for the first time since injuring his wing! At 07:35 this morning, he landed with a small brown trout, which was gratefully received by Mrs G. It seems he was followed by an intruder as both were mantling and looking up as he landed. Mrs G soon tucked into her breakfast, and there was no way she was sharing!
Top

https://www.facebook.com/BywydGwylltGla ... 657128126/
Latest news from the Friends of the Ospreys Pont Croesor nest.
The single chick on the Pont Croesor nest has reached 31 days old and can now be clearly seen with a telescope from our Outdoor Osprey Viewing Area at the Visitor Centre. Visitors are enjoying watching the parents, Z2/Aeron and Blue 014, flying over their territory and watching Blue 014 feeding their chick.
Visitors on Saturday were amazed to see Blue 014 in an impressive acrobatic aerial display, as an intruding Osprey that we believe was Mrs G, passed over the Visitor Centre heading towards the Porthmadog Cob. Blue 014 performed an aerial territorial sky dance and somersaulted through the air. It was an incredible sight for everyone that witnessed it.
Here is a short recent video of the chick in the nest.
Top

https://www.facebook.com/BywydGwylltGla ... 387448086/
The chick on the Friends of the Ospreys’ Pont Croesor nest was ringed yesterday 16th July at 32 days old.
Blue 494 is the only chick to hatch from a clutch of three to Blue 014 (Poole Harbour 2018) and her mate, Z2/Aeron (Dyfi 2017). He weighed 1236g with a wing length of 273mm.
Congratulations and thank you to Friends of the Ospreys for inviting us to capture and share this experience. The beginning of a new era for Ospreys in the Glaslyn Valley

https://www.facebook.com/BywydGwylltGla ... 6086748299
BLUE 494 HAS FLEDGED!
The Friends of the Ospreys Pont Croesor chick left the nest and took his first flight at 11:35 this morning. Many visitors and volunteers were lucky enough to witness the exciting moment from our Viewing Site at Pont Croesor. Video to follow...

https://www.facebook.com/BywydGwylltGla ... 835927245/
Blue 494 has been gaining confidence in his flight since fledging on Tuesday. He enjoyed taking short flights around the nest area at Pont Croesor yesterday, offering fantastic views to visitors who were thrilled to witness an osprey chick in the sky this season.
Top

https://www.facebook.com/BywydGwylltGla ... 4769456764
Mrs G and Aran had visitors yesterday, with three intruding ospreys over the Glaslyn nest around midday. One of the ospreys landed on the perch, giving us the chance to identify it and we were surprised to learn it was one of this years chicks from the Friends of the Ospreys BM nest, which is not that far away as the osprey flies. Blue 493 is a male chick and was obviously exploring the area for future reference. Mrs G was quick to send 493 back on his way home. Perhaps we will see him again in two years time?
Top 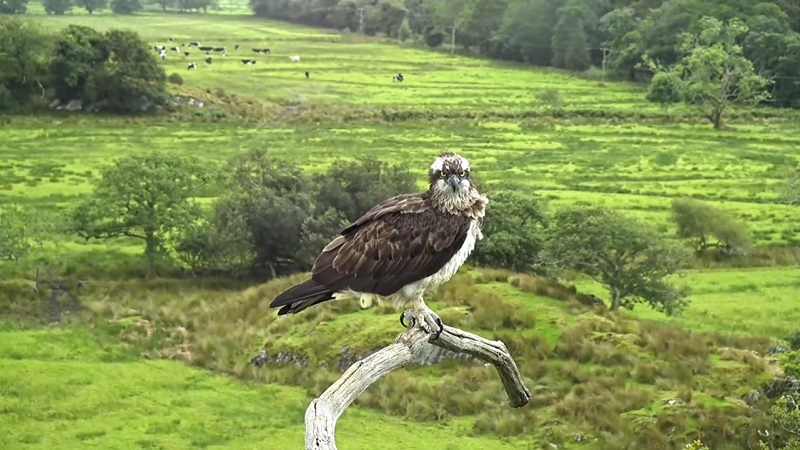 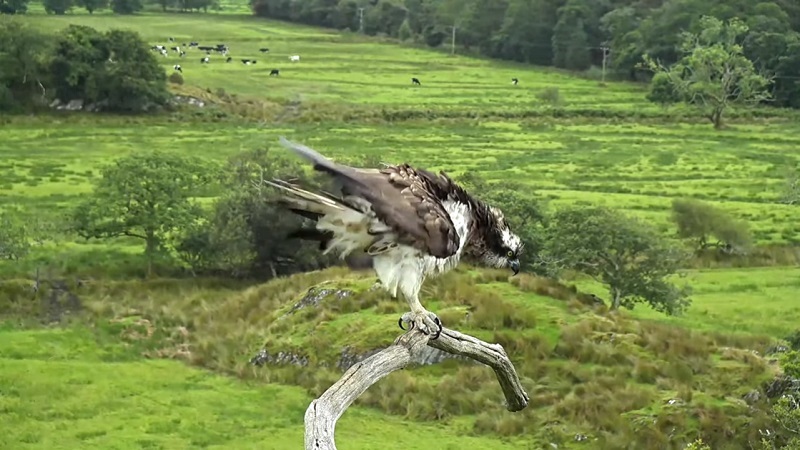 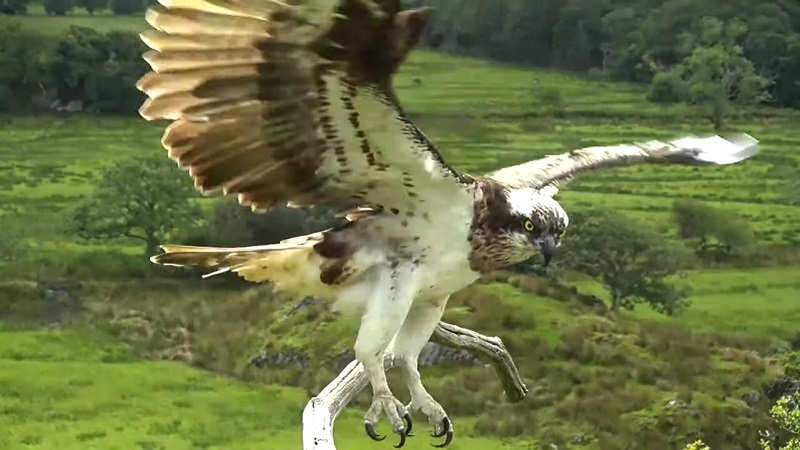 seira, thank you! She is so beautiful!

I'm so sad about this tragic season. Will we see she again...I cross my fingers.
The nature needs us not, but we need the nature
Top
Post Reply
427 posts