A photographic record of seasonal changes in your area.
Post Reply
480 posts

Hello Olga! I hope you are doing well! To help you to recover - we have been seeing some of our squirrels lately, today even three, two dark and one red enjoying some spring sun in the trees.
This visited a bit closer the other day:

How lovely squirrels!
Oh, yes. I have to get used to be cautious, and not not forget the restrictions I have got.

Margossa, thanks for telling. It has been a hard experience for you..

My case is not so very serious, but of course, I may spoil the best results if, if I am not careful enough!


Today I washed half of the work room window! Baby face visited, but the window was too dirty! At last the temperature was +1, +3 C at best.
SHoW(StorkaHolics of the World)
Top

Olga, thank you for news from you.

Olga, please take care of yourself and you don't work too hard.
I believe that all will be fine and you will be feel good.

Olga, again I am invading your thread with

This is about the way that squirrels adopt their relatives' infants. It says even though squirrels are rather solitary they know the voices of their nearby relatives. If they do not hear their voices, they will go to investigate and will adopt orphaned infants if they think they will be able to care for them.

Olga,I hope your springtime is a bit better than in southern europe ?
I also hope you are taking care and getting better every day.

SHoW(StorkaHolics of the World)
Top

I'm not sure if it is Baby face on the second video. Those two move at same time almost always.
SHoW(StorkaHolics of the World)
Top

Very nice to see the woodpeckers and squirrels!
I see you still have some snow left too, do you have a cold spring like the rest of us?
How are your back doing? I hope you feel improvement.
Thank you for the videos, Olga

I was so happy to see those two Black woodpeckers together today! I believe they will have nesting time soon! Until now I have seen mostly only the other one of them, a male with the bigger red cap over the head. The one on the left has red feathers only on the back side of head, so it's a female!

The male has been calling during last weeks, and al last he seems to have found company!

Lussi, my back is improving each day, but to be careful is most necessary. After some weeks it will be possible to begin the real rehabilitation, if everything goes well, as expected.

edit: Yes, Lussi, we too have had hard, cold and long winter here. It is said that we have got winter back already for two times! During last years the March temperatures have been on the average about ten degrees higher than this year! I have to wait til the snow and ice have melted to begin to clean the garden. But I have searched and prepared some tools for the work!
SHoW(StorkaHolics of the World)
Top

I hope you are doing okay, Olga!

The female and male Black woodpecker!

They flew both to the northeast part of Squirrel Hill. Fine, it's peaceful forest there, no new houses to wait to be build there!
SHoW(StorkaHolics of the World)
Top

Olga:
I'm happy to hear form you. I think it is not easy to be patient, but for a good recovery of your back I think it is necessary.
Nice to see the squirrels are back on your feeder

.
Ohh, you have really a lot of snow

. But spring will come, I don't know WHEN

.
Thank you also for the nice pictures of the woodpecker.
Top


Good to hear you are doing well and making progress.
Top

Happy Easter to Olga and all on Squirrel Hill

Thank you for news from Squirrel Hill.
Thank you very much for your great movies of squirrels and Black Woodpeckers.

Thank you also for your nice photos of Black Woodpecker couple.

I'm glad that you feel better. I believe that soon your back will in good condition.

Black squirrel and deer ate together. View from webcam from Minnesota http://deertrail.us/
I took this picture one week ago. 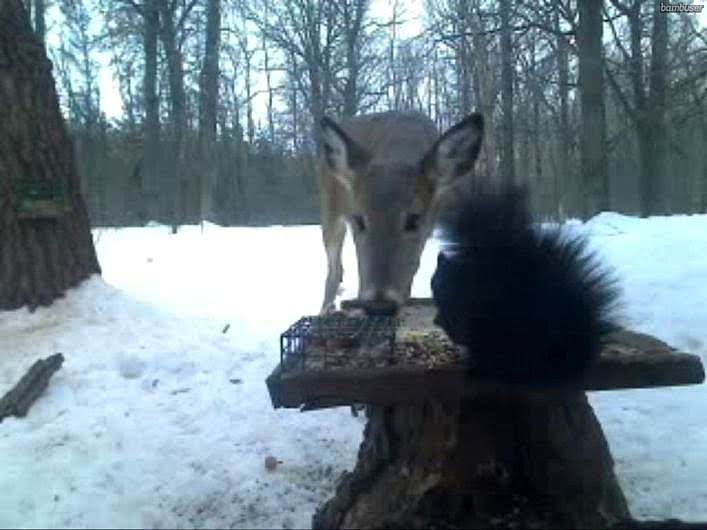 Happy Easter also from here to you, Olga, from me and my family!

Olga: Happy Easter to you, your family, Nappu and Nanu and all the inhabitants of Squirrel Hill!!!!!

Happy Easter to you and your family Olga, to Nappu and Nanu, and all living creatures at Squirrel Hill!

This squirrel has become so tame during the winter, that I almost stepped on it when I was out with my camera this morning.
Top

Thank you all for the great photos! What lovely are the deer! And Happy Easter days to Squirrel friends!

Today I saw a Lark, Alauda arvensis and European Goldfinches, Carduelis carduelis, from my window, on the apple trees.

The spring is coming little by little, with small steps...

Jays have appeared too, and a couple of Magpies. From the living room window I saw two Ravens playing in the air, making bird ballet movements and acrobatics - I wonder if they may be building their nest on the southern side forest of the hill!
SHoW(StorkaHolics of the World)
Top