About storks and migrating birds

Documentary about "Illegal bird hunting on Malta"
A short part shows Dr. Bergmanis and LSE of Latvia
http://www.videoportal.sf.tv/video?id=8 ... 7de7595d8f
Sorry it's in german language and be careful, some scenes are not really nice

From the Committee Against Bird Slaughter you can follow up the terrible activities at Malta, Italy. Cyprus etc. mainly during Migration time... Last year in Malta some White Storks were shot ... why did they fly this way!?
Have a nice day!
Brit
http://www.worldofanimals.eu/
Top

13 year old tagged White Stork "Max" is dead. Sorry I only got that sad news in a letter in German language:

Tere ja ...
Hello back in the New Year everybody!
Shortly after having moved to my loved Middle Rhine Valley here in Oberwesel, I could study the first swarms of returning cranes from the South!!!
I nearly had tears in my eyes because I had not counted with them here. The main stopover route does pass the region where I lived before...
In the media it was a topic that very much people here have reported those crane tracks to the Hessische Vogelschutzwarte in Frankfurt. Martin Hormann there is the expert for the black storks here in Middle Germany, too (published "the" book about BS together with Carsten Rohde and a further expert. Was a topic here some time ago).
But how ever - winter is still playing its games.

Ah, not to forget:
Hundreds of waxwings were seen in parts of Germany, having moved from Northern regions - for lack of food.
This phenomenon is not to watch regularly here. I remember one (in N-Europe heavy) winter when in Hamburg "colonies" of loudly chirping waxwings were occupying meadows and bushes in search for food. Pretty little and woolly-looking birds!
Top

One of the first black storks has arrived to Hungary 2 days ago.
The nest is in the Gemenc forest.

"One can measure the greatness and the moral progress of a nation by looking at how it treats its animals." - Mahatma Gandhi
George
http://madarlesok.lapunk.hu/
Top

All of the tagged NABU white Storks have started the spring migration from Africa.

MAP: http://www.nabu.de/aktionenundprojekte/ ... index.html
"One can measure the greatness and the moral progress of a nation by looking at how it treats its animals." - Mahatma Gandhi
George
http://madarlesok.lapunk.hu/
Top

Living in the middle of Germany is good...Some days ago I could watch by chance high above the Middlerhine valley a flock/track/?? of common cranes something like stopping and struggling within their crowd deciding where to fly on!! They were turning a few times and then changed the direction half-back to where they came from. After this I found myself

inmidst a huge rain shower, whereafter it became very cold again.
The reason for that phenomenon, this late winter time often to watch, is the 2 colliding air masses of high and low pressure - like a border, in my area just above the Rhine river. I've heard of very much stranded flocks of birds along the Rhine. (Sorry no car to get anywhere and have a personal look on)
I hope for better weather conditions now - after

After its already in many newspapers, I also may post something about here. Not far away from my town there are Whitestorks breeding for many years. Since three years there is always a Blackstork around and as the people living there tell, there were bad fights between Black and White, only last year peace came back and the Black one was so to say ‘functioning’ as a babysitter. Whenever the White ones were gone, looking for food for their offspring, he was at the nest and watched that nothing went wrong.

And this year the very unbelievable happened: the Blackstork brought a partner along and now they are breeding there on the roof. On the chimney the Whitestorks are breeding and where the chimney goes into the roof in this triangle the Blackstorks finished the nest, which was started 3 years ago. Lots of moss, just like they do it in the woods … 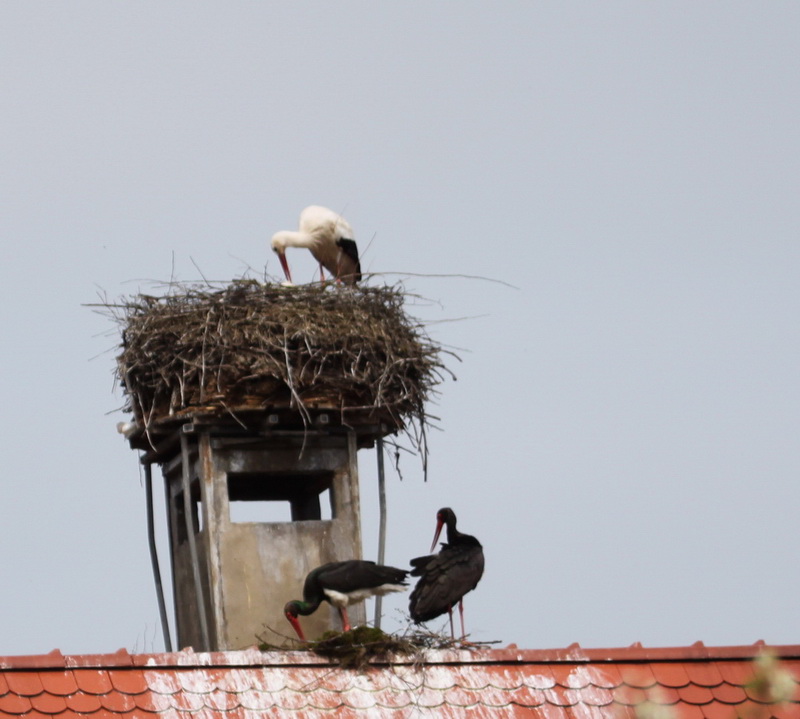 Hallo Brit,
are you talking of somewhere in Meck-Pomm?
I didn't "hear" of that before. (I am no internet recherche freak anymore)

Anyway thanks a lot for posting this unbelievable turning of an exciting story from the storks' family.
I wonder if the BS was one of the "renegade" ones of his family. Or how to explain why he was preferring the wideness of civilized roof landscape? It's astonishing because of the lack of shadow and wet woodland.
Top

No, it's in Franconia, Katinka.

Nobody knows how this could happen. Is it only this one case or will it be like the Blackbirds, who once were very shy inhabitants of woods only!? Time will show....

In the surrounding are brooks and a river, so enough water actually. But still very strange the whole story!
Have a nice day!
Brit
http://www.worldofanimals.eu/
Top

it is really amazing what you are reporting about these Blackstorks! Thank you for showing it to us.
The fact, that they built a nest underneith the Whitestorks as well as the development of their 'career'!

I wonder, how it will go on with the press and the tourisme which will start now....
greetings from Baska

We are living in a dangerous age. Human beings are controlling and dominating the nature, before they have learned to control themselves.
Albert Schweitzer
Top

I know, this is a white stork but a bit strange.


What happened to this stork. He seems to have taken an oil bath or dirty water? Poor little guy...
Top

Oh...yes the white one right seems not to expect a fortunate future. His plumage looks as if he got something dirty onto his body. It would have been helpful if the creator of this snapshot had made a notice - which surrounding etc.
On my opinion oil is very abstract. Pond with oil/petrol?
Instead it could have been that the WS got into some muddy deeper waters and had to swim. So if he is only wet, than I wouldn't care about his way to the South...
tx oehoeowl for being attentively with the Belgian/Nederlandse birding site!
Top

Now after quite a while I came here again and looked for your linked waarneming.nl pics, oehoeowl.
Behind the author Arno ten Hoevel I found a small webpage - it's especially here worth being visited! You can have brilliant impressions of the birds of his Nederlandse home region if you load the .pdf file for his small book. To me it appears to be a treasure

for birders.
I only can make big eyes, concerning the names...
Perhaps you can contact Arno to get some info about the BS observations for this part of the country?
Top

A quite new post by Carsten Rohde on his http://www.blackstorknotes.blogspot.de.
By this occasion I discovered an earlier post with videos from Israel 2012: here the sequence of bathing BS via YT.
I always believed in the BS' joy for water, as cranes are known for it, too.
Top

Today I was on a little hike up to the heights, to face the sun for some more time than down in the valley…and I was blinded…
Definitely November now: the air temperature became really

frosty when I reached the 300 m – point, but it was easier to get forward on the muddy ground of some paths.
What was most impressive: the leaves on the ground, mostly from oaks and trembling poplar (aspen), were "decorated" with frozen pearls of dew, also the countless hips at the bushes. No, I don't need brilliants

with me! But next year I have to try to get a camera from somebody and start to illustrate my walks.
On my way I came along a pear tree which I had discovered some weeks before. It stands in an abandoned cattle meadow and was full with fruits. This time I found that again nobody had been there for a harvest, and I enjoyed the picking-up very much. My coat's pockets nearly flew over with the pears. It's the kind of pear that keeps its green, tight and acidly character. Now it was a little bit

difficult to walk on with "airy" feet, but…
After all I heard the cranes!
Again a big smile accompanied me for the next hour, and I felt like "they are doing that only for me here". Fortunately I was on the top of a larger side valley of the Rhine river so I had an oversight where the fight was going.
They were more than 100 each in 3 flocks, and a smaller one. In opposite to the times before I could see them in a lower distance to the ground.
While the first formation was passing, a loud calling or screaming started, and they came together to a crowd. It looked like big mess – I expected to see them flying back or something. Suddenly I understood: they were starting to use the thermal lift. After a longer time it looked like if they'd reached a better height and flew on heading South-West.

the juvenile cranes: their calls sound higher, thinner and less melodic. (In opposite to the storks, young cranes fly together with the adult birds to learn about the migration route.)

Back at home I searched for an internet source that says st. about flight speed and destinations in SW-direction to stay over night. I was wondering about that in my last post.
First – cranes reach their fasted speed across water surfaces, and fly a with an average of 55 to 60 kms/h (34 to 37 mph).
About the resting place: France is not as far away as I thought…and there IS a popular crane destination: the " Lac du Der-Chantecoq" in the Département Marne, ca. 250 kms (155 ms) distance from my area. So I calculate the durance to fly there with 4 hours.
That is great now to know where they fly next. This lake often is used to stay there for the complete winter, depending on climate conditions.

Ooh, returning cranes!
Today on my way by bicycle I watched a medium-sized flock of cranes passing the valley eastwards. The spring-winter goes on.
And without my binoculars, I only saw the chirping tits in the trees up the heights. But to hear their voice made me think of spring feelings again. I won't hope they dare to start breeding season...
Top
Post Reply
89 posts

Return to “Stories and News”