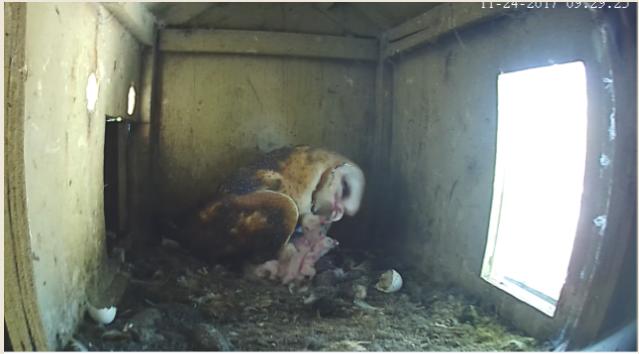 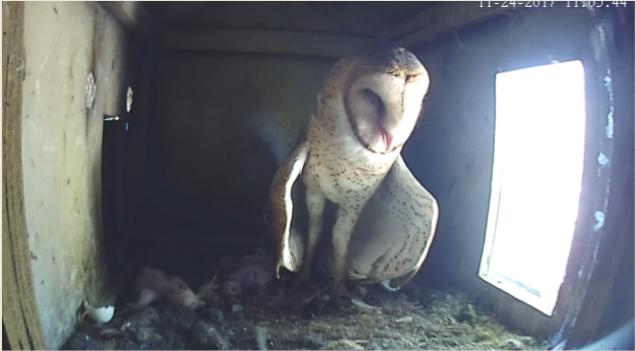 crawling around, so cute. 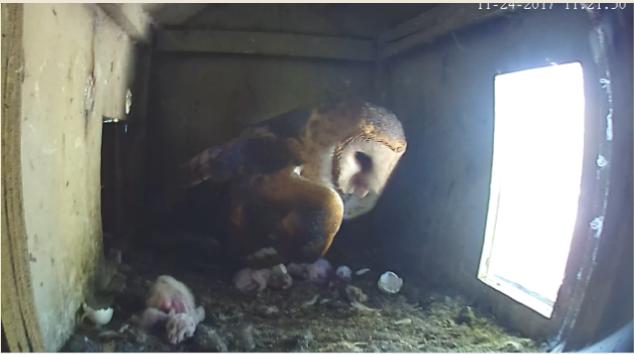 Congrats to Didi & Jasper on the hatching of egg # 5.
TY Kanseagle: https://youtu.be/CekbGgazxWA

Thank you, Seira for sharing this sweet video.

Now, the family is complete for this clutch.

Why have they changed his name? I must not understand this! 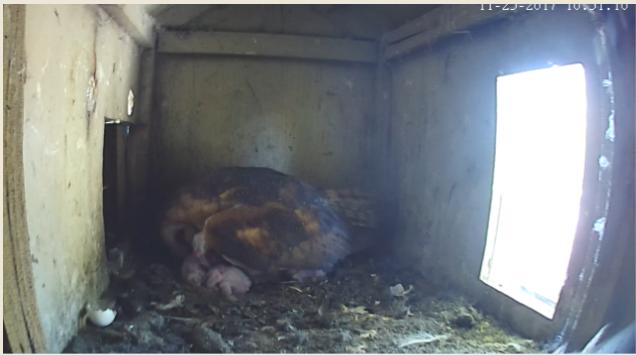 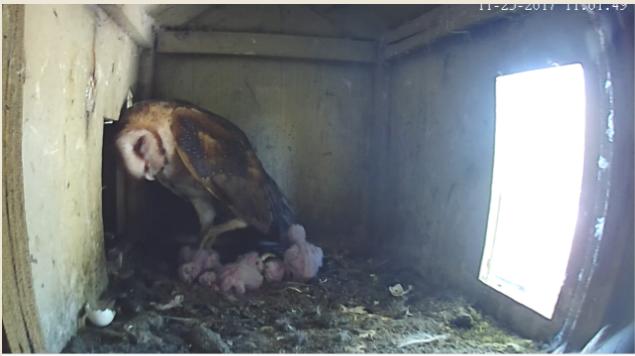 Hot day in the box. 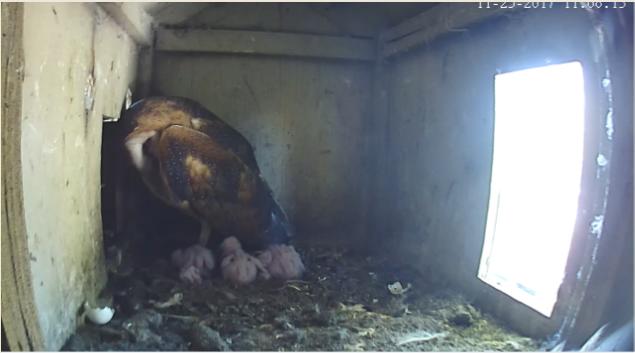 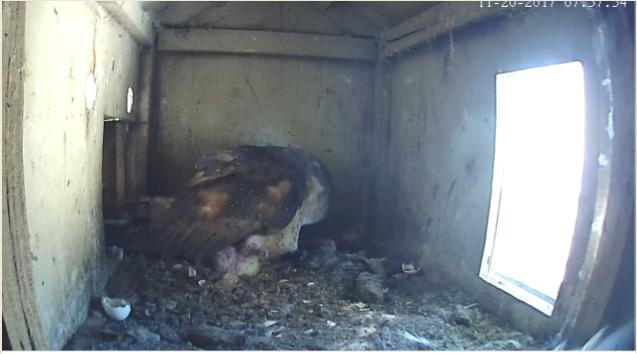 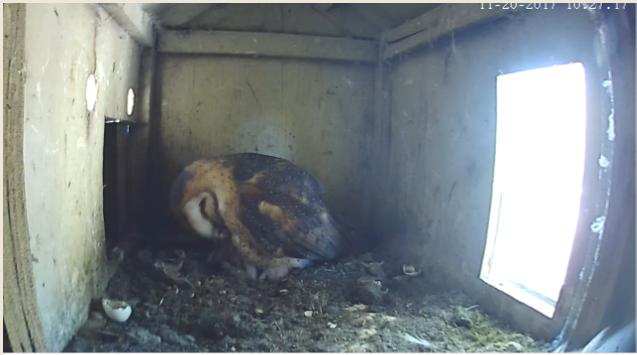 while Didi has been gone and Jasper stayed with them for a while, and he has delivered a gopher and the mouse to the babies
Top

FB https://www.facebook.com/TheOwlChannel/ ... 3695412523
Didi went on a flyabout at 8:39pm and has not returned as of 4:38am. Jasper has del'd food while Didi has been gone. Ang & OCG have been notified and will access the situation after they find out whether Didi has returned or not. We are keeping chat paused for now until we have further info. Please understand and say a prayer that Didi is ok ♥

from chat,
Sher67
Ang & OCG are turning the cams off for now. We will update ASAP.
LvOwls
If you would like to express your thoughts and prayers please do on our Social Stream page. Thanks for your understanding about us keeping chat paused for now.
OCG and Ang are outside now looking everywhere for her. They are checking on the babies.


I watch the cam all night, waiting Didi home and saw Jasper guarding their babies, he is such a good Dad.
When I edit this post, I want to cry...
Prayers for Didi and our beloved owl family ♥
Top

We are deeply saddened. It appears that something tragic has happened to Didi. She did not return and the owlets have all passed away. We are devastated and in deep sorrow. We will be cleaning out the Hideout and deciding what to do next.

my heart is raining...
Top

FB https://www.facebook.com/TheOwlChannel/ ... 5065286386
Last night Jasper came home and a new female showed up and was investigating. Here are some of the great pics

from chat mods,
couleedam
From Ang & OCG: We are just so devastated and are in shock that this happened. We buried the five owlets together in the yard below the box. It was very sad. We cleaned out the box a little and turned some of the cameras back on for some closure for everyone.
Sher67
Lone posted this for us last night.
I think sweet Jasper is still trying to figure out what happened. I have looked in occasionally and he has been in the Hideout area since previous reports, mainly sitting here and there, and looking around. If he has left the area I have not seen it,
He has been on perch, the Hideout Porch, inside the Hideout, and on the Lookout. Around 12:45 he went inside the Hideout and walked around and looked at everything closely, especially back where Didi and the owlets were. He went into the Pantry Room... and did some major pulling on something back around the camera (OR the camera), as you could hear major LOUD noises but couldn't see what he was doing because he was too close or under/over/beside camera. Maybe he was working on the cables... Didi's "legacy"of ripping out cables and cameras may be continued.


so heartbreaking... I'm still in deep sadness
Meshare cams didn't working for me and Ustream cams are offline, I only can get the info from chat
Top

Oh, what for a tragedy, Seira. I can't believe it. All looked so well.

All these sweet babies are died and Mom Didi most likely too. 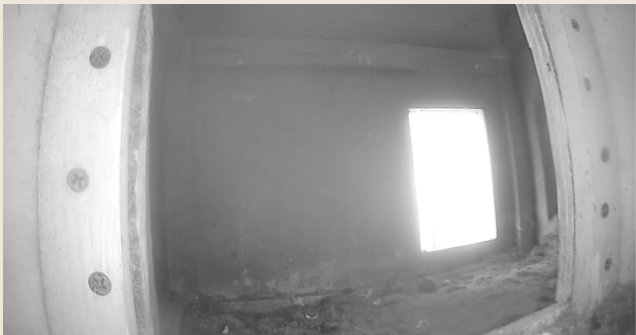 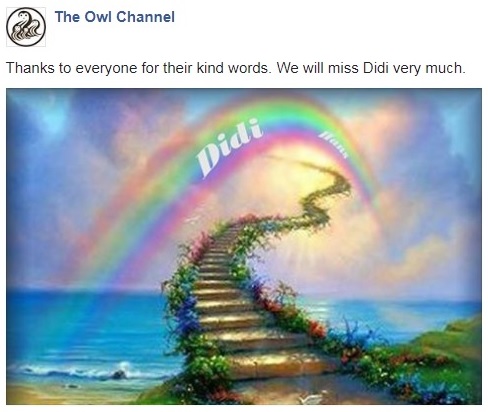 ...and the little poor owlets Kai, Fen, Hap, Pal and Domino. They all would only few days old...

I just read it today and it's so sad.

It was the same with the little owls in Holland, the father does not succeed. Last year it happened in Memmingen, but the chicks were bigger and could be saved.
Top

I have read, that owls are regularly visit the box. It is only my thinking, that it could be, that Didi must defended her territory and has not survived these fight. 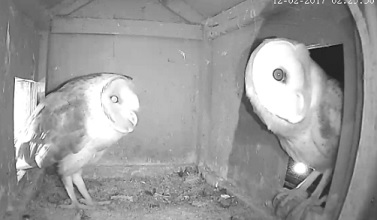 pic made by LvOwls
The nature needs us not, but we need the nature
Top
Post Reply
979 posts