All eagles except White-tailed and Spotted Eagles
Locked
672 posts


Thanks to Macko50
Top

Verreaux's Eagle (Aquila verreauxii) or Black Eagle, not to be confused with the Asian Black Eagle Ictinaetus malayensis.

Black Eagles live in hilly and mountainous regions of southern and eastern Africa (extending marginally into Chad), and very locally in West Africa, the Arabian Peninsula and the southern Middle East. It is one of the most specialised species concerning prey – the rock hyrax. If this prey is scarce, they may survive with mixed success on other prey like small antelopes, gamebirds, hares, monkes and other vertebrates.

They are very large eagles, 75 to 96 cm from bill to tail, males weigh 3 to 4,2 kg, females 3,1 to 5,8 kg, wingspan is 1,80 to 2,30 m. Except for a slight difference in size females and males show no physical difference. Adult birds are mostly jet-black. Cere is yellow, bill is grey, eye-ring and "brows" are yellow. On flying birds seen from above is white on back, rump and upper-tail coverts and part of the scapulars, which forms a V-shaped patch, although this feature is partially obscured in perched birds. Adults also have conspicuous white windows on the wing quills at the carpal joint (at the base of the primaries) when seen flying both from above and below.

Generally, like in most aquila eagles, two eggs are laid (range from one to three are known), laid at a three day interval. Both birds are incubating with the female taking the major share, for 43 to 47 days, starting with it immediately after laying which makes hatching happen 2-3 days apart. One egg is sometimes infertile, second egg tends to be 10% smaller.
Black Eagles are considered "obligate cainists", meaning the older sibling kills the younger one (in more than 90% of observed nests) by either starvation or direct attacks. Aggression may continue for up to 70 days after hatching! Fledging happens regionally different between 90 to 99 days after hatching. 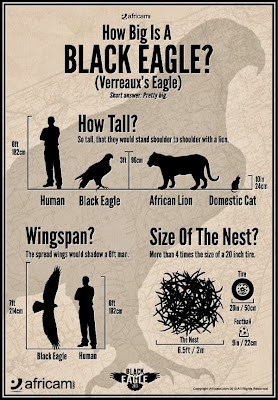 Black Eagles were studied extensively by Valerie Gargett (links and references for publications can be found here: viewtopic.php?f=53&t=590)
For more facts please look at the Wikipedia article http://en.wikipedia.org/wiki/Verreaux%27s_Eagle from where I have taken the important facts and numbers.

This LIVE camera is dedicated to broadcasting the wild Black Eagles of Roodekrans from Johannesburg, South Africa. This latest conservation project focuses on the ambitious task of capturing the breeding cycle of the black eagles as they attempt to raise a new chick. What makes it so ambitious is that the nest of this particular pair of eagles is embedded into the sheer rock face of a 50 metre (164 feet) high cliff. To bring the story to people’s computer screens would require not only the use of some ground breaking technology but also an installation team complete with avid and experienced rock climbers.


The female eagle is called Emoyeni (upon the wind) and is estimated to be between 35 and 40 years old and has reared since beeing sighted from the early 1970 a number of offspring.
The male eagle Thulane (the shy one) is much younger and replaced the former mate that vanished in 1998.
The pair has built a number of nesting sites on the cliff face over the years.

More on the eagles and the project:
http://www.blackeagles.co.za/

http://macaulaylibrary.org/search?taxon ... &tab=audio
“One can measure the greatness and the moral progress of a nation by looking at how it treats its animals” (Mahatma Gandhi)
"You can judge a man's true character by the way he treats his fellow animals" (Paul McCartney)

Chick looks so much bigger and stronger today. Adult is trying to feed it but chick isn't showing a lot of interest just now.

Does anyone have sound from this nest? I turned up the volume and hear a kind of "white noise" but no environmental sounds..

@Jo UK: With the volume turned up to 100%, I could hear some very faint beeps.
"Man sieht nur mit dem Herzen gut , das Wesentliche ist für die Augen unsichtbar.
"You can only see well with your heart, the essential things are invisible for your eyes. ( Antoine de St. Exupérie - der kleine Prinz)
Top

In Wikipedia you can read that Black Eagles are not very vocal, not like our LSE who have something "to say" most of the time. Unfortunately I could on first quick search not find anything about voices. Most probably because they don't talk much

Now the little one gets something to eat

Thanks for all the information about these big, magnificent eagles, Felis silvestris. Such dedicated ornithologists around the world - tree climbing, rock climbing people, bringing us these interesting webcams.
Top

Thanks for the thread-opening and interesting informations.

(the pics are from today): 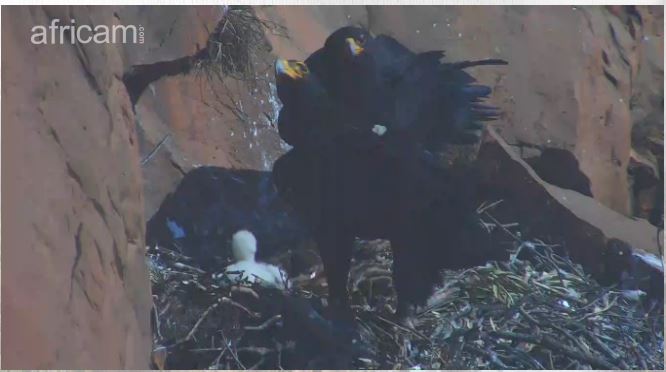 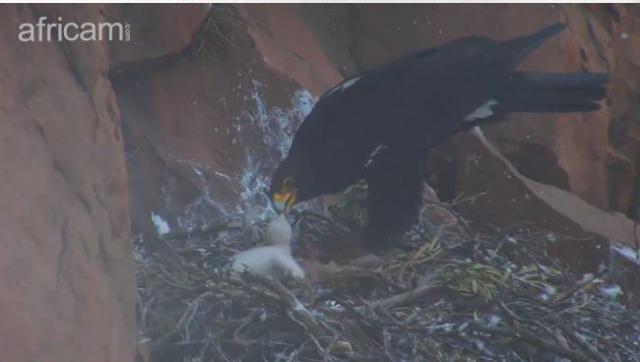 the chick with piece of meat... 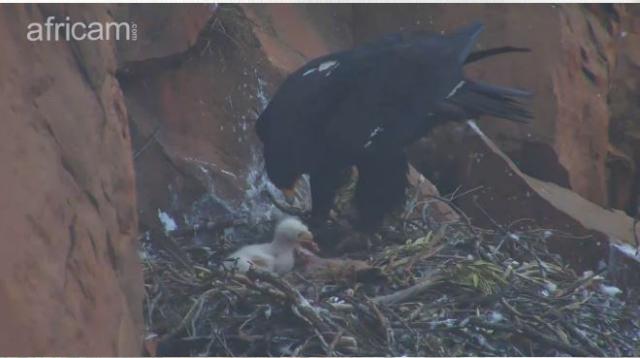 At this time of year, it is a bonus for us to have an active nest webcam with a chick to admire.

I found some video clips of the black eagles -
(music is annoying - why can't we hear the eagle?)

These images came from a Yahoo search.
Top

Here is a picture of the camera fixing!

Black Swan, the male, the father of the chick is Thulane, I think the eaglet has no name yet. At least I did not find one yet.
“One can measure the greatness and the moral progress of a nation by looking at how it treats its animals” (Mahatma Gandhi)
"You can judge a man's true character by the way he treats his fellow animals" (Paul McCartney)

I'm trying to find the difference between Emoyeni and Thulane.
Perhaps it is the small white spot on the left side plumage.
If the female remains in the nest most of the time, so she has this spot.

A Photo of this morning before the parents exchange:
no spot 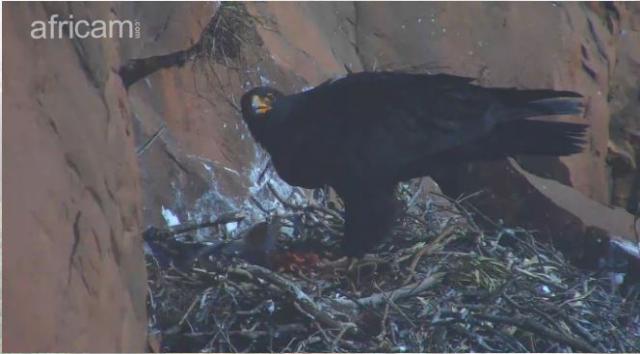 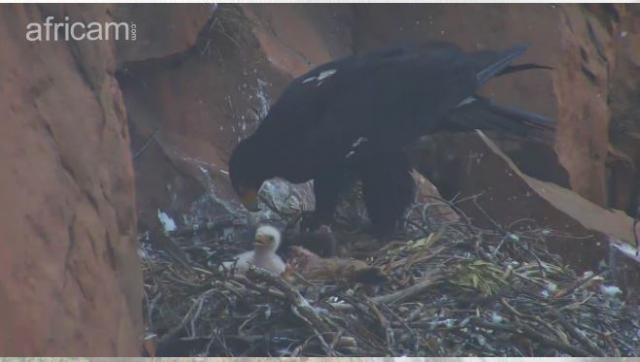 The tiny feet of chick is shown on the right

But it is unsafe because difficult light conditions

I think finding a difference in Black Eagles is extremely difficult. Female and male have the same kind of plumage and the only difference is their size, which is also not too big. So one can only try to find an individual characteristic, which is, if you don't see them together, not so easy. Maybe you are on the right track with the white spot, time will show!
“One can measure the greatness and the moral progress of a nation by looking at how it treats its animals” (Mahatma Gandhi)
"You can judge a man's true character by the way he treats his fellow animals" (Paul McCartney)

Thank you Felis, these are true words.

And it's always so quiet in the nest. 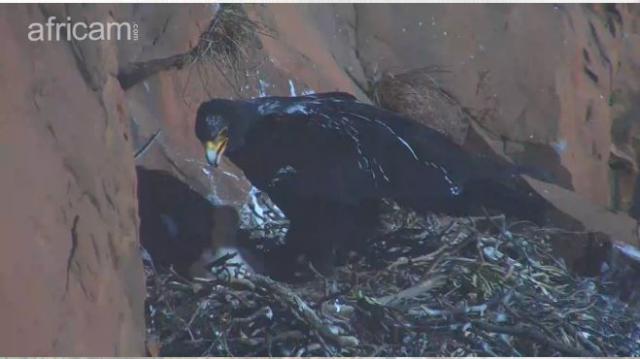 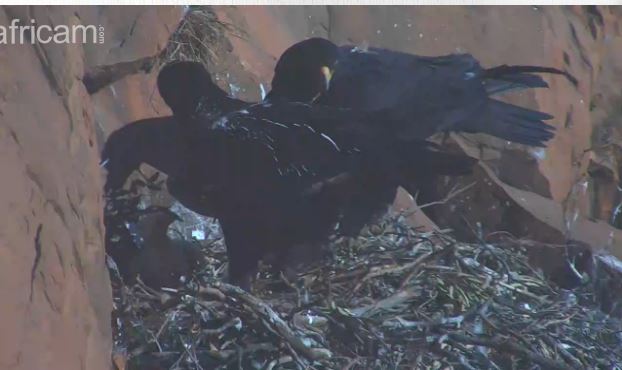 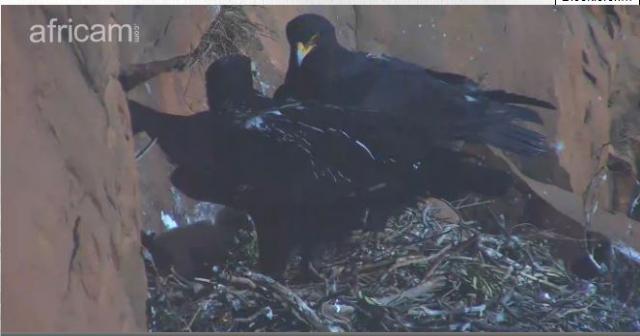 I scrolled back the fb chronic-fotos and found this one from 16th Juli.

Unfortunately Heydenreich did not wrote a comment to his foto and the female has a similar v-mark too.. 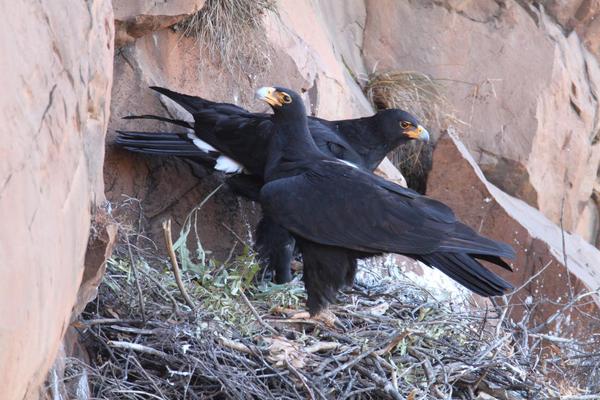 @Ferenz, great Thanks. A beautyful pic!
Yes, that could be.

Today I have not seen a food delivery 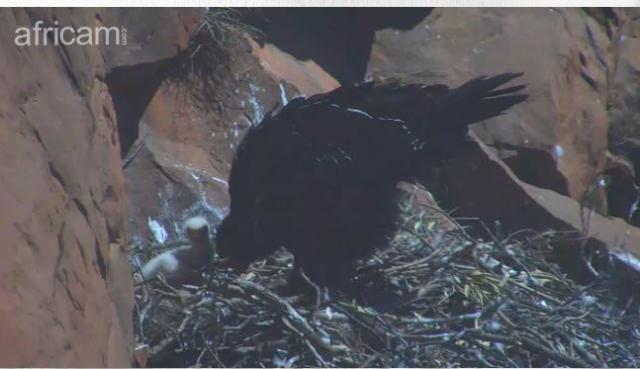 The baby lies in Mum's shadow in a deepening. 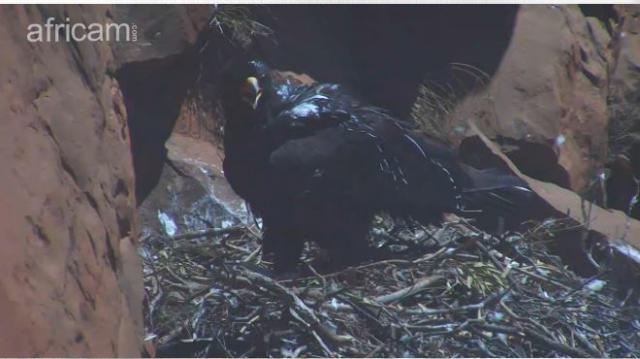 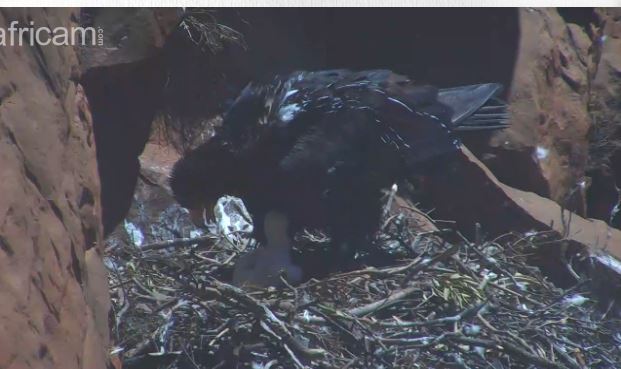 ...preening in the shadow of Mum 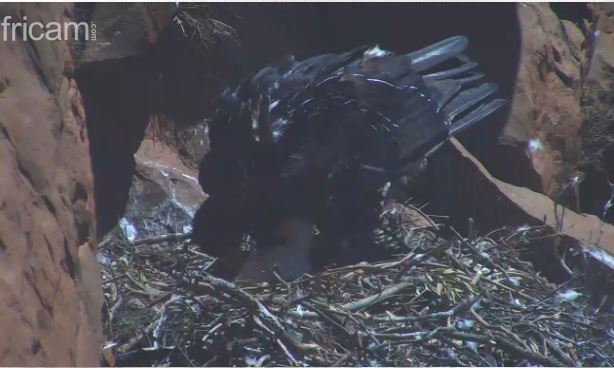 I think Emoyeni is a bit worried, but she does not want to let the chick alone.
(If I may say so) 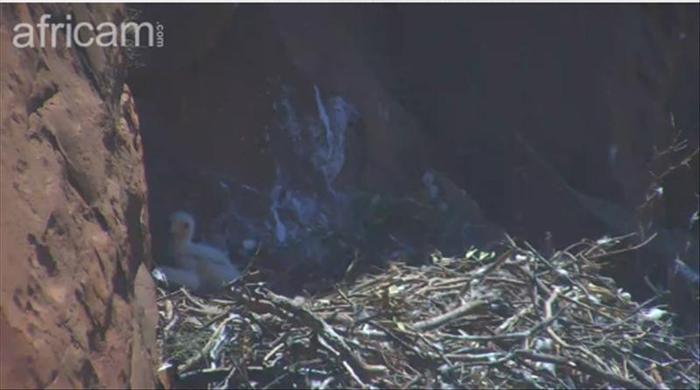 ... but not for long: Dad comes into the nest 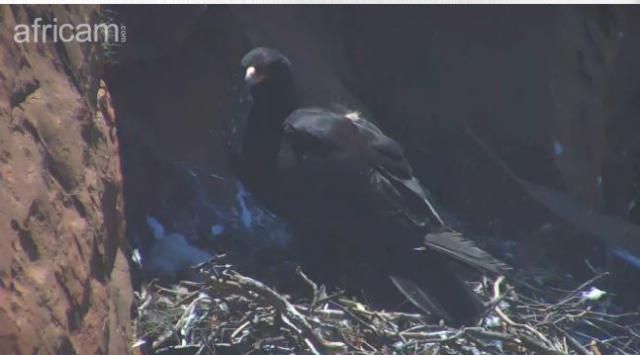 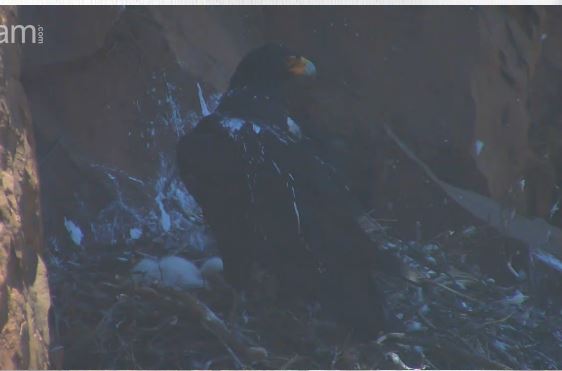 (Mum is full of s..t since last night, we can now easily distinguished,