Quotation:
"The one positive aspect of this incident is that we now know for sure that at least one of Thulani and Emoyeni’s offspring has survived for eight years now, and that she has settled in an area between 40 and 50 kilometres north of the breeding site. "

Very touching! Thanks lianaliesma!
What a wonder, that she's been found!
Wish her a fully recovery!
Top


Black Eagle Project Roodekrans
20. Dezember um 13:32 ·
Short update on Mkhaza. She is gaining more and more mobility in her legs as the days past. Go girl.

Makhaza, the offspring of Thulani and Emoyeni of 2007 is doing well after her mishap with a Duiker protecting their lamb.
According to a staff member of Vulpro, she is eating well, and is very comfortable in her new sling, as per attached photo.
It would seem that a little time is required for her to heal fully, and her release into the wild once again. Wishing her well. (Reported by Johann van den Berg)

VulPro
After much thought and deliberation; as well as understanding how she feels and where she is at, knowing her pain, anguish and inability to fly free and away from humans, we have made the hard decision to let her go tomorrow morning. This is not an easy decision, especially with such a charismatic species but it is time. We have done everything possible for her. We have fought for and with her and now she needs to be set free again. Tonight she sleeps in doors and in comfort, warm and cozy whilst we finally get much needed rain here at VulPro. From all of us at VulPro, we are so sorry we could not heal her. We are all devastated.

Black Eagle Project Roodekrans
In lieu of the harsh criticism uttered by some people, I feel it necessary to explain why this very difficult decision had to be taken. The injuries sustained by the eagle during the attack by a buck to defend her youngster, was far worse than initially thought.
Be assured that the staff of Vulpro did everything in their power to save her, but it transpired that she was totally lame in her legs and wings. That would mean that she would spend the rest of her life in a sling, while enduring a lot of pain and discomfort.
When Ernest, Gerald and I visited her earlier in the week, we could see that she was in immense pain, and she did not even try to defend herself while being touched.
Trust you will understand that this was in the best interest of the eagle who would have died a horrible death in the wild had she not been found.
Regards,
(Johann van den Berg)

Oh, it is so sad to read that.

I was hopeful, that she would be good... 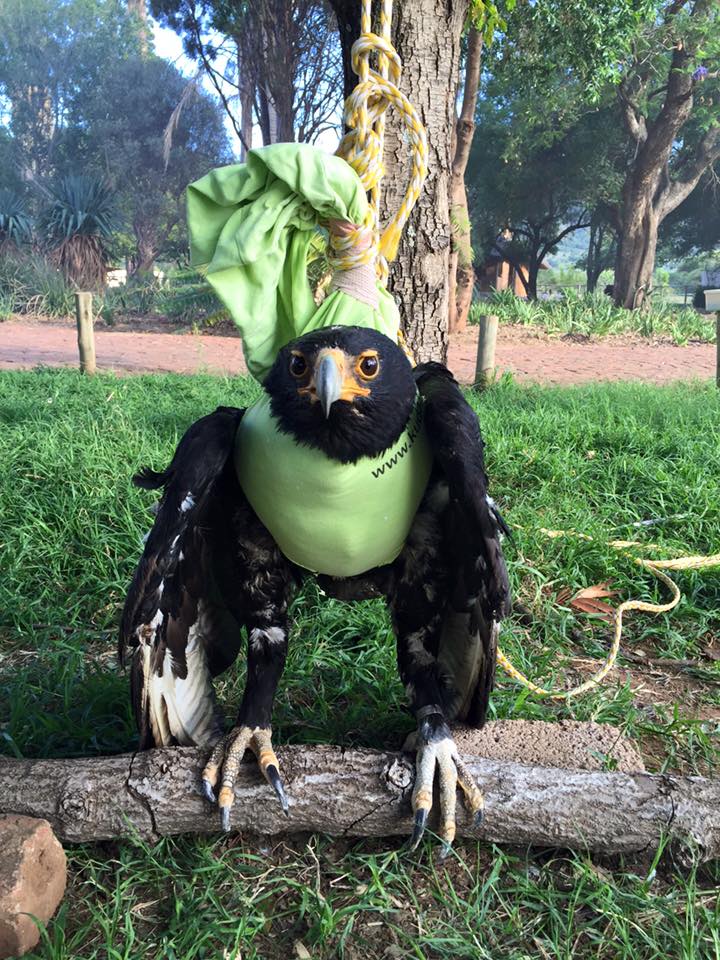 Fly free forever...beautiful Makhaza.
The nature needs us not, but we need the nature
Top

Thulane and Emoyeni work on the nest rebuilding in the mornings, although season has not started yet. They spend nights mostly near the upper nest.

Their main nest was destroyed during the big storm on January 9th.
You can find photos of the nest destruction on FB. Beneath on the main menu there is also a video of the waterfall after a storm. It's amazing and scary.
Top

Two men repositioned the solar panels today.
In the mornings they were in a shadow and cam didn't work

I was little bit surprised, when I opened the cam in the morning. The waterfall looked interesting from a different angle.

It turned out, that additional solar panel was delivered and mounted. Also, the camera position has been changed.

The new breeding season is coming. Eagles starded to bring greenery to the nest . Lat year the first egg was laid April 11

Although eagles still bring sticks and greenery to the nest, Thulane brings the prey for Emoyeni, seems, it is out of an acceptable period for egg's lying. Unless that will be again be a late clutch, as in the Nessi case.

BEPR Update June 2016
Black Eagle Project Roodekrans·8 czerwca 2016
Dear BEPR observers & interested parties,
Photos by Ernest Porter, Garth Heydenrych & Brian Reynolds.
As the popular saying goes: ”A change is as good as a holiday…” Well, I’m not so certain when this extended eagle-holiday is going to come to an end, as quite frankly, the pair is now well overdue with their breeding season, which appears to have been scuttled.
There are a few possibilities that have crossed our minds during a chat with Garth Heydenrych, Joanne Meyer and I as to what the cause(s) may be as this behaviour is not usual for Verreaux’s eagles.
Our thoughts herewith:
1. Climate change – El Nino drought period,
2. Prey availability – quality of prey availability due to the poor rainfall period,
3. Nest reduction – unlikely, but a possibility
4. Infertility in the female – most likely cause
Infertility can be a real issue in that science indicate that eagles may breed up to the very end of their life span, and although we are only speculating what the age is of the female, reliable calculations indicate that she may be at least 35-40 years old, which is considerable for a wild eagle. In captivity eagles can really achieve greater longevity as there is generally less stress in that they need not hunt and or breed.
Of major concern is that during their initial nest refurbishment session during April, sporadic mating was evident that goes hand in hand with the refurbishment period, however, this did not produce any eggs…an indication that infertility may be evident.
In the least, I received some positive information from project member Dennis Dry, that during their Sunday 5 June morning session, both eagles brought many sticks and green leafy sprays, which is usually associated with a new breeding season, but so late in the year remains a bone of contention that we are all wrestling with. It is not clear however, if any mating was observed…
The best we can do is to not give up hope despite the odds of a breeding season materialising. Just observing this magnificent pair is enough of a privilege to have them in our midst…something that does not occur too frequently. .........
Chins up thus and all fingers and toes crossed…let’s see what transpires during the remainder of this month…
Yours in conservation,
Boudewijn van der Lecq
Black Eagle Project Roodekrans

It seems that the grand old lady, Emoyeni, has left or been driven away by a younger female. The project was already wondering why there was no progress but now a new female has turned up and Emoyeni has not been seen for a while after three eagles were spotted on July 9. It is not known what exactly has happened.

Link to the project's Facebook entry: The beginning of a new era https://www.facebook.com/notes/black-ea ... cation=ufi

Ernest Porter, whose outstanding pictures were shared here as well, has compiled a tribute to Emoyeni: https://www.facebook.com/blackeagleproj ... 6458324149
“One can measure the greatness and the moral progress of a nation by looking at how it treats its animals” (Mahatma Gandhi)
"You can judge a man's true character by the way he treats his fellow animals" (Paul McCartney)

I used to think, that Emoyeni will be there forever, though she is old lady (about 40). But she is so beautiful and royal!
After tracking for years this couple and their offsprings Nessi, Jono and Kendi I feel sad for Emoyeni.
Top

Ernest Porter has taken a nice photo of Thulane's new friend. She has been given the name Makatsa , that means Unexpected surprise

I used to think, that Emoyeni will be there forever, though she is old lady (about 40). But she is so beautiful and royal!
After tracking for years this couple and their offsprings Nessi, Jono and Kendi I feel sad for Emoyeni.


Amazing video about Emoyeni/"Upon the Wind" and her previous partner Quatele/ "The Cross One"... In memory

The Black Eagle in the Drakensberg Mountains, South Africa; by Wild Animals

, thank you very much for this amazing and touching video

It's a fantastic, emotional and dramatically movie. The nature is really hard and sometimes brutal. Great Emoyeni!
TY for sharing, lianaliesma.I had tears in my eyes.
The nature needs us not, but we need the nature
Top
Post Reply
146 posts