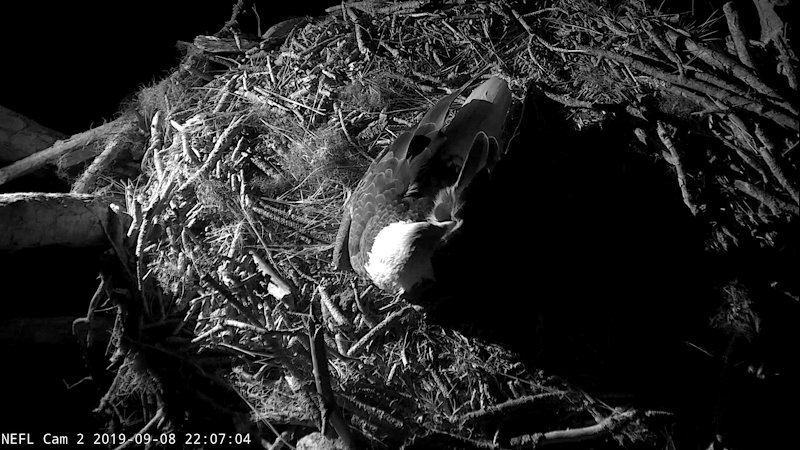 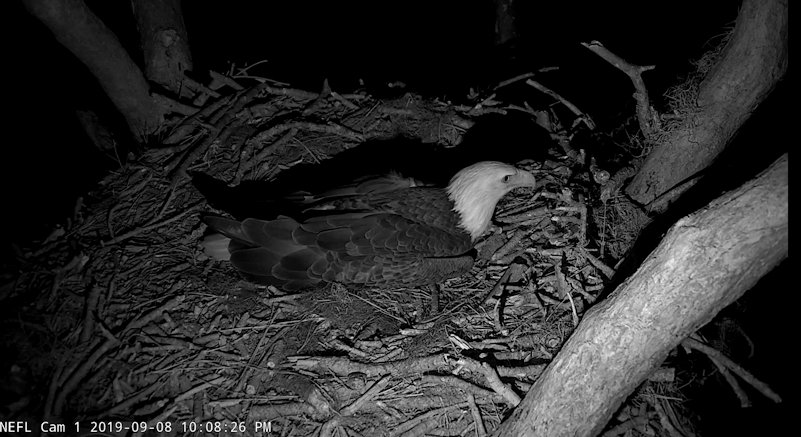 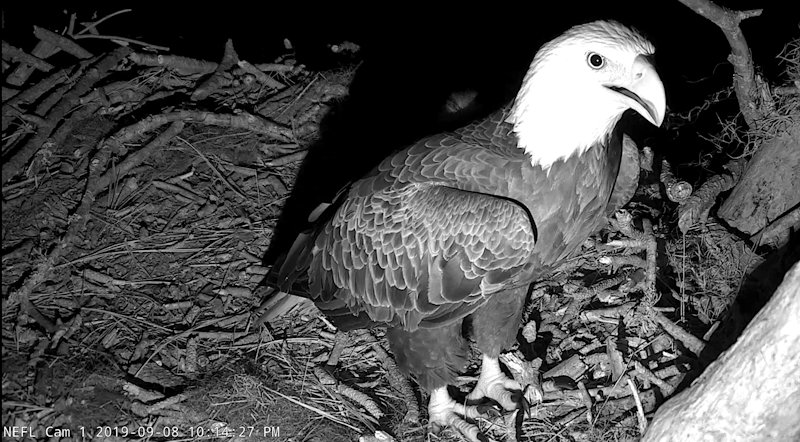 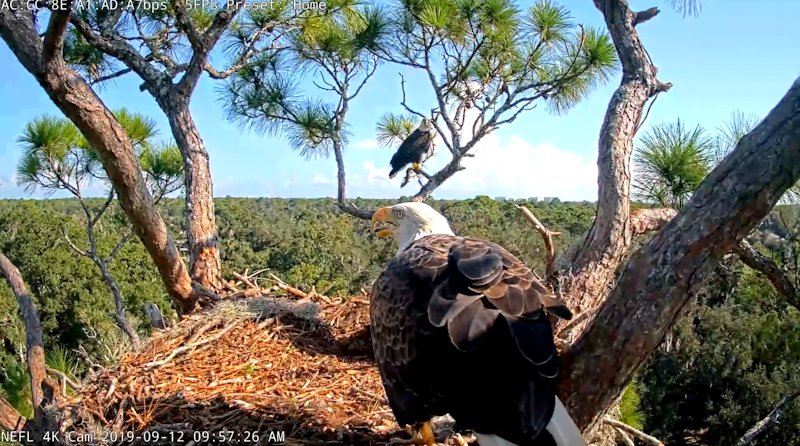 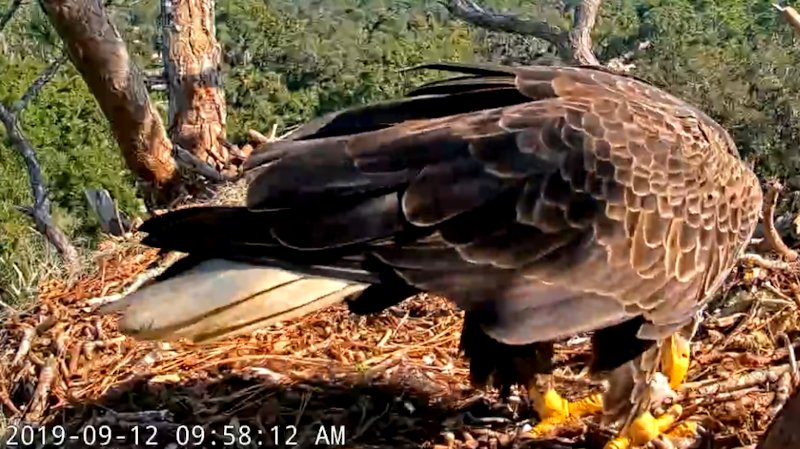 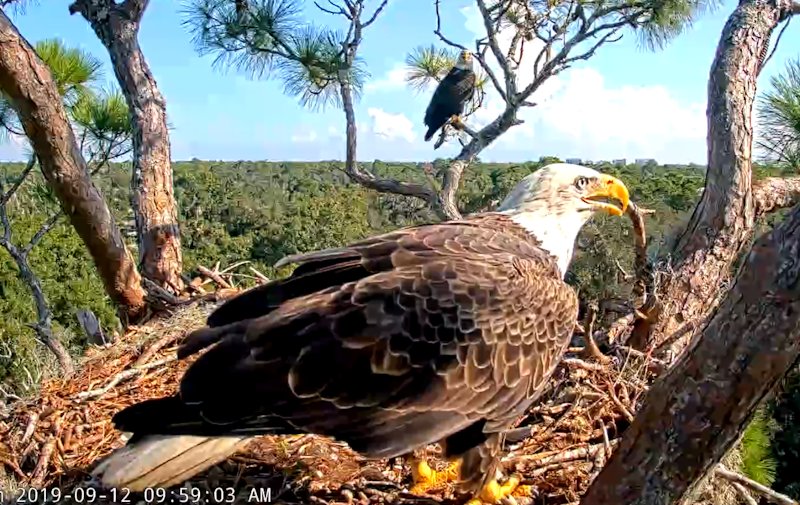 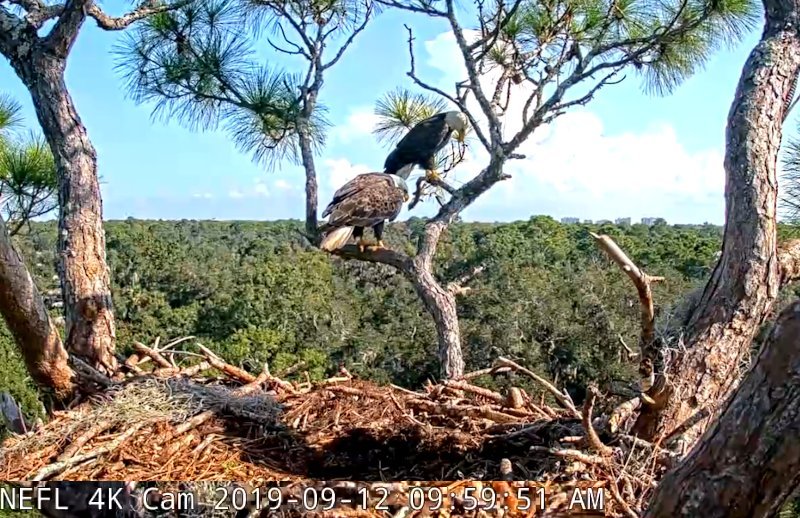 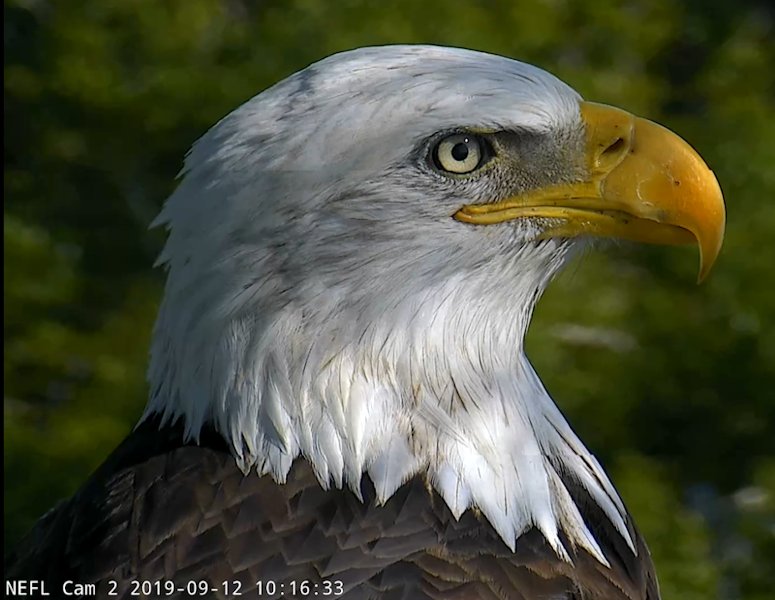 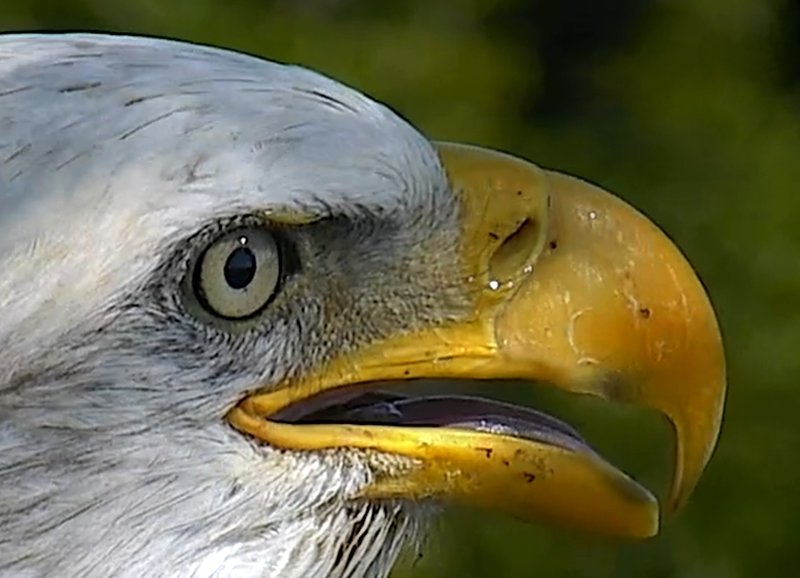 The bony protuberance above the eye socket, for protection of the eye. it has almost the same colour like the beak. 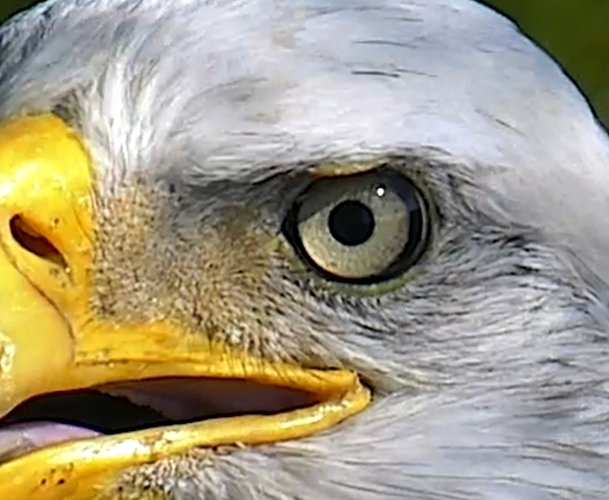 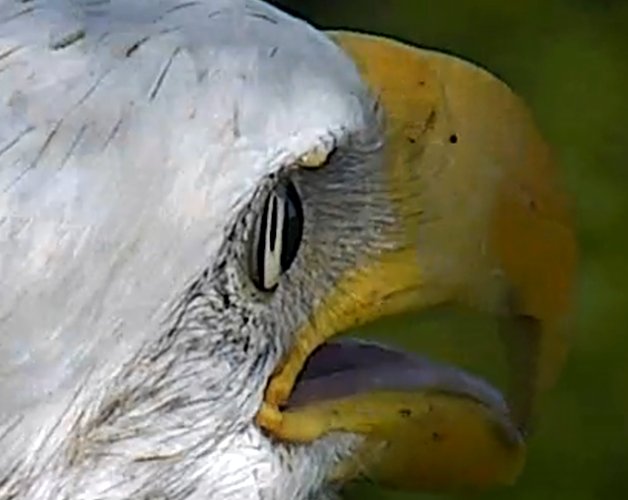 Samson is apparently in firm breeding intention with female A2.
They were very busy in the nest today.

Unfortunately, every trace of Romeo and JulieT is missing. I wonder like many others what could have happened. That Romeo has lost all interest in his nest?

But now we may observe her son Samson (hatched 2013) with luck at a brood.

Isn't it unusual that offspring return to their own nest and even use it as their nest?
"Let nature be your teacher."
(William Wordsworth)
Top

I do not know, Polly.
In fact, I have watched the first and last time in 2012 a Bald eagle couple in their nest for longer. Mom and Dad in in Decorah.
since then, only sporadically.
And i know absolutely nothing about the current or previous residents here in this nest and about their family circumstances.
Today I have not looked into the nest.

After the attack on Juliet & Samson began in December 2018 (in the middle of egg incubation) it became very confusing.
I tried to read and understand all this much later. There were many mainly female attackers and visitors.

But one is apparently very sure that neither Samson nor A2 were involved. Although Samson visited the nest two or three times in 2018, he did not attack or expel his parents.

Juliet's situation is unclear (she was injured and disappeared) and Samson left the nest after the second newly hatched chick was eaten by a female eagle. However, he was not injured.

I hope the summary is relatively correct.

Until then, they had been the sole and successful breeding pair in this nest since 2008.
That's how I understood it.

Currently A2 is waiting for Samson. 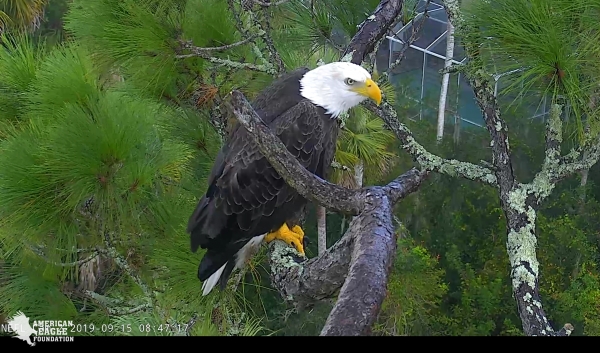 There was a mating attempt this morning but Samson was aborted by the strong wind.

(approximately 7:17 p.m.)
A video from today of the stormy mating attempt. 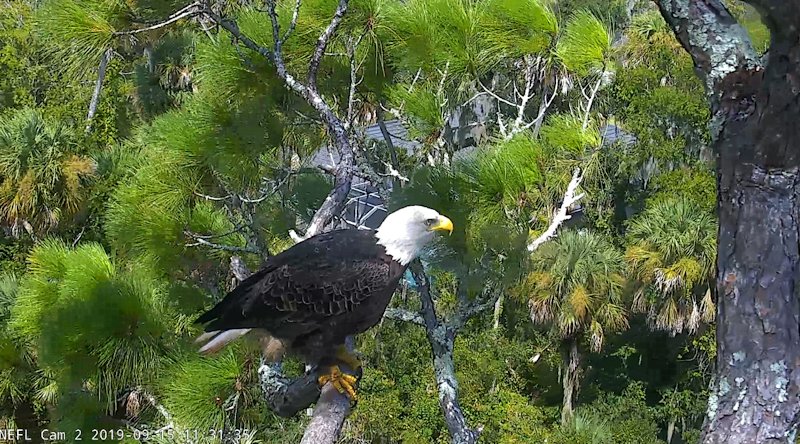 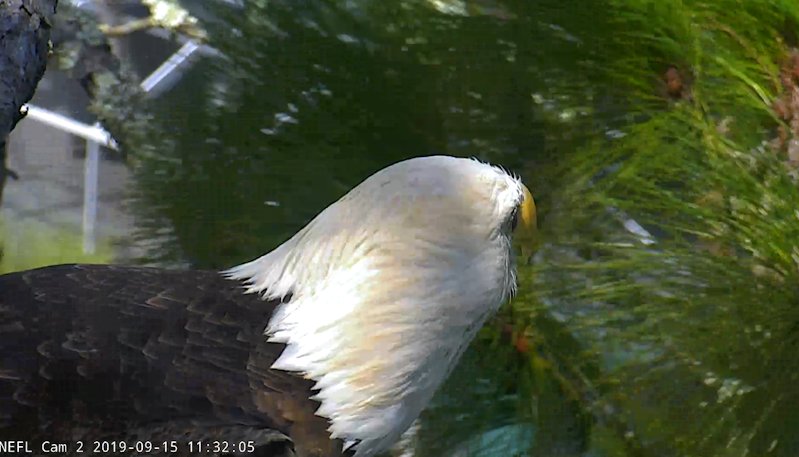 Samson and A2 are still on a family course. The couple has found each other, is always together and works together.

I'm still missing Romeo and Juliet *sigh* and my heart bleeds when i think on them.
Nevertheless Samson and A2 seem to become our new inhabitants and the new dream couple of R&J's nest.
Samson already gave a first, small fish gift for A2

What I read in the chat today touched me very much.

When in December 2018 the aggressive attacks on Romeo and Juliet caused Juliet to leave the nest injured and never return, A2 was there as a protector.
Of course you can't say that A2 wanted to protect or why she really did, but she watched over the eggs of Romeo and Juliet while Romeo bravely defended his brood.

It just seems certain that A2 didn't fly aggressive attacks.

The photo is taken from the chat. 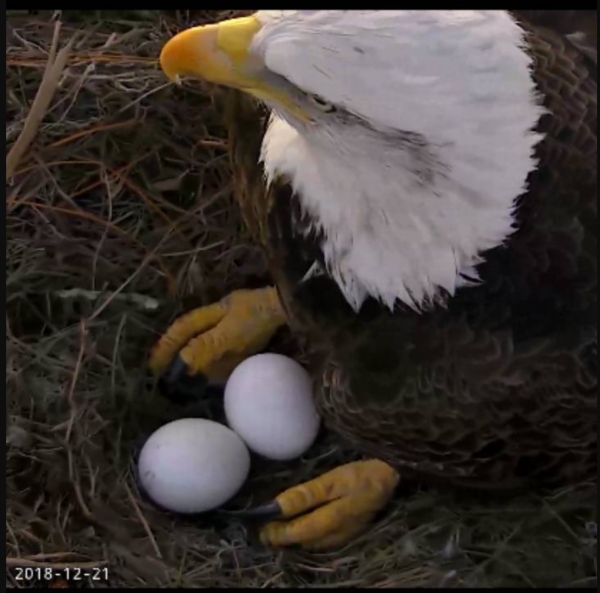 Samson already gave a first, small fish gift for A2

Polly wrote: ↑September 29th, 2019, 8:56 pm .....
When in December 2018 the aggressive attacks on Romeo and Juliet caused Juliet to leave the nest injured and never return, A2 was there as a protector.
Of course you can't say that A2 wanted to protect or why she really did, but she watched over the eggs of Romeo and Juliet while Romeo bravely defended his brood.

It just seems certain that A2 didn't fly aggressive attacks.
......

Oh yes, Polly, it was touching, A2 even tried to "help" Romeo incubating after Juliet disappeared, although she didn't know how to do it right.


So glad, that Samson and A2 have found each other. I think she is a strong and good mate and i believe she will also be a very good Mom, when it should be happening.
Today, Sept 30, was the first (quicky) mating seen on cam

Samson defended nest and huge fish from the beautiful sub-adult.
https://youtu.be/mayeL89ExwI
by AEF
The nature needs us not, but we need the nature
Top

And there's still a lot of work going on at the nursery. A2 is very determined.

If I have read correctly, in the past the eggs were laid around the beginning of November. Another couple but it seems the *schedule* is being kept. 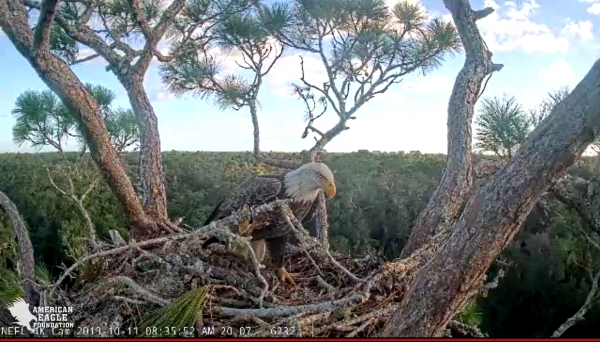 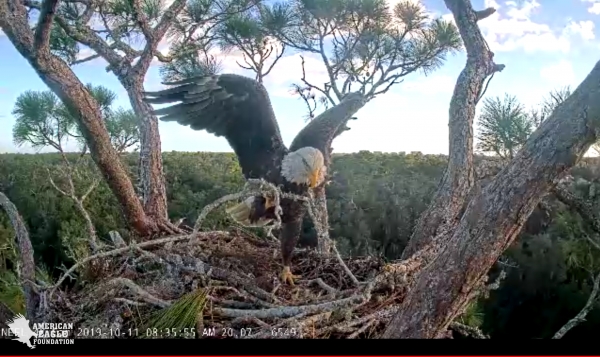 Actually, the stream always works. It's something different, that's true. But not much.
But I really like these close-ups when the camera is zoomed manually. You see subtleties you could never see on Youtube.
Some here have posted great photos already. Fantastic!

When the chicks are here, I'm really looking forward to taking snapshots with the camera zoomed in.

Lovely A2 Has Her New Name!


A2 has been officially given a new name - Gabrielle!

"Gabrielle means: “Hero of God”, “God is my might and my strength”. Gabriel is derived from Gabrielle and was the angel the appeared to Mary announcing the birth of Christ. Gabrielle is mighty and strong and truly Samson’s angel. Gabrielle or Gabby for short - has won all our hearts along with Samson this season and she is truly fitting to be the female on Romeo & Juliet's nest!"
(taken from Lady Hawk's description of the video)

The name of the cam page has been changed to:

THE HAMLET
@ Bea
(in stead of the old Romeo and Juliet)

We wish successful breeding for the season

In view of the many empty nests and some sad events this couple does very well.

They are a good team ...two very powerful animals and very determined.
We wish them peace for their project.