The second buzzard species breeding in Estonia besides the common buzzard (Buteo buteo) is the European Honey Buzzard (Pernis apivorus).
It is a medium sized, 52–60-centimetre-long, between 800 and 1050 g heavy bird of prey, and like this is larger and longer winged, 135–150 centimetres, compared to the smaller common buzzard. It appears longer necked with a small head and a longer tail, which has fewer bars than the common buzzard, usually with two narrow dark bars and a broad dark sub-terminal bar. The wings appear flat when soaring, the wings are held straight with the wing tips horizontal or sometimes slightly pointed down. The head protrudes forwards with a slight kink downwards and sometimes a very angular chest can be seen.
Unusual for birds of prey, the sexes can be distinguished on plumage. The male has a blue-grey head, while the female's head is brown. The female is slightly larger and darker than the male, the male reaching about 94% of the size of the female. A striking feature are the yellow eyes.

About the name Wikipedia says:
Despite its English name, this species is more closely related to kites of the genera Leptodon and Chondrohierax than to true buzzards in Buteo. The binomen is due to Linné, derived from περνης, an Aristotelian term for a bird of prey, and Latin apivorus "bee-eating" (although bees are much less important than wasps in the bird's diet). In German the bird carries the name "Wespenbussard" - Wasp bussard.

The distribution of the European honey buzzard comprises the biggest part of Europe and south-western Siberia. Wintering in tropical Africa. For breeding the honey buzzard prefers wooded areas with openings and diversified edges or in proximity of wetland areas.

Honey buzzards are specialist feeders, living mainly on the larvae and nests of wasps and hornets, although it will take small mammals, reptiles and birds. It is the only known predator of the Asian giant hornet. It will spend large amounts of time on the forest floor excavating wasp nests. It is equipped with long toes and claws adapted to raking and digging, as well as scale-like feathering on its head, thought to be a defence against the stings of its victims.

European honey buzzards start their breeding extremely late for European birds of prey. They arrive late at their breeding areas and first eggs won't appear before middle, sometimes even end of May up to mid June. Earliest recorded egg laying was 19th May and latest 14th June.
A clutch usually consists of 2, very rarely of 3, roundish, 49,8 x 40,8 mm big, 45 g heavy, quite dark, reddish-brown to blackish-brown eggs.
Breeding time is 34 days, both partners breed, and forage independently of one another. For the first three weeks after hatching, the male does the biggest part of hunting for food.
Interesting is, the chicks won't start pooping over the nest rim as soon as possible, but deposit the faeces on certain spots on the nest rim forming small heaps.
The chicks fledge with 44 days and are supplied with food on the nest by the adult birds until they leave for migration.


Flight call of the honey buzzard:

The page for the European Honey Buzzard - Herilaseviu - on the Aasta lind page of the Estonian Ornithological Society (in Estonian Language):
http://www.eoy.ee/viu/viud/herilaseviu
“One can measure the greatness and the moral progress of a nation by looking at how it treats its animals” (Mahatma Gandhi)
"You can judge a man's true character by the way he treats his fellow animals" (Paul McCartney)

European honey buzzards are known to use more than one nest, so installing a nest camera is a very tricky enterprise. Our friends from Kotkaklubi will try to show us the nest life of the honey buzzards during the Estonian Buzzard year and hope they have chosen the right nest site for the camera.

More information about the camera and setting to be added

When I added the topic to the forum, it was a jubilee as well, this was the 500th topic in our Looduskalender Forum!

May 19:
The camera started working: 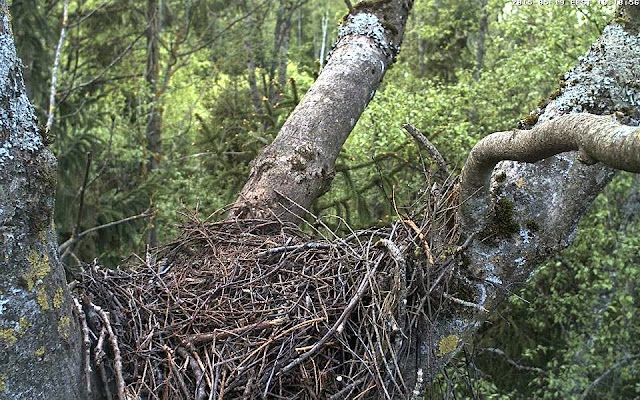 The nest looks yet unoccupied. Keep all our fingers crossed that soon we will see some action here!

Sunday, May 24 the first two honey buzzards appeared on the nest

It looks like here we have the owners of the nest, left you see the lady of the nest and on the right her husband: 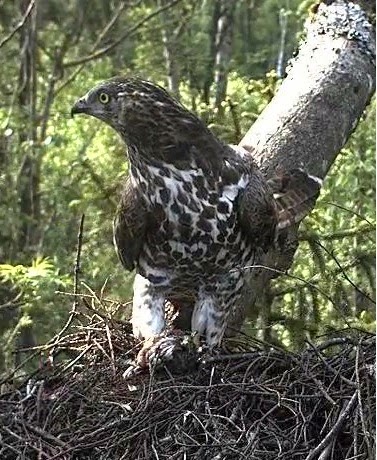 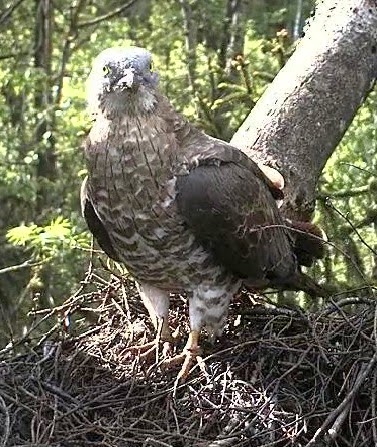 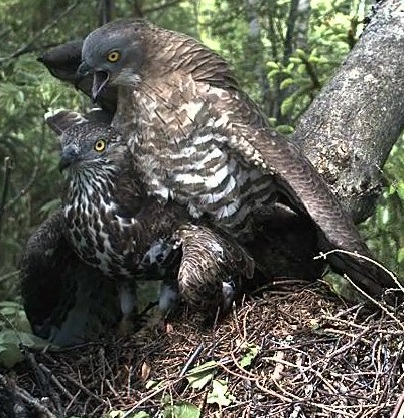 The third buzzard nest has started!
“One can measure the greatness and the moral progress of a nation by looking at how it treats its animals” (Mahatma Gandhi)
"You can judge a man's true character by the way he treats his fellow animals" (Paul McCartney) 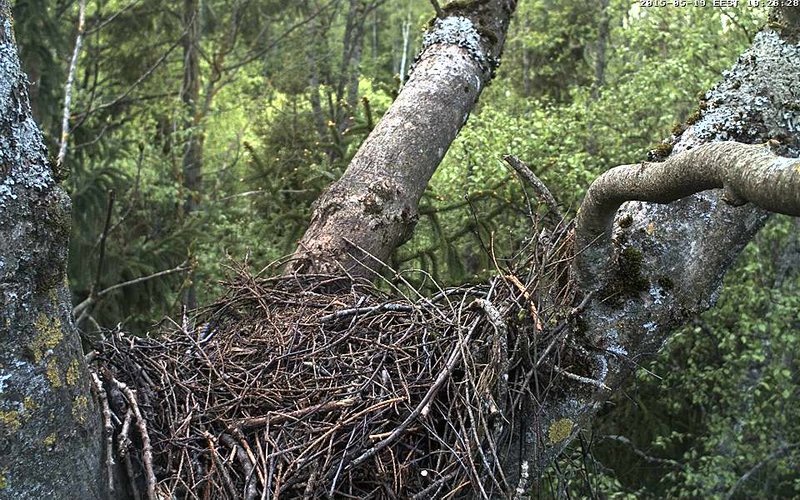 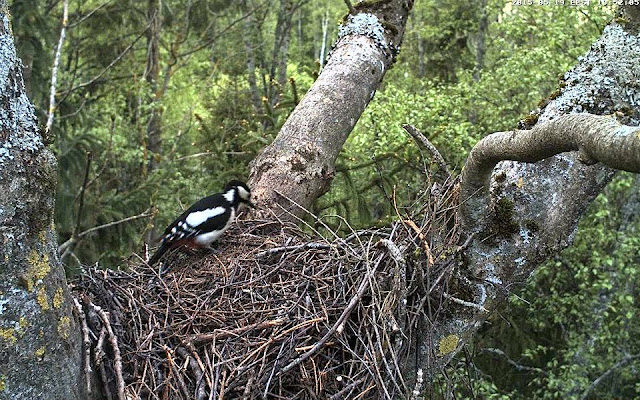 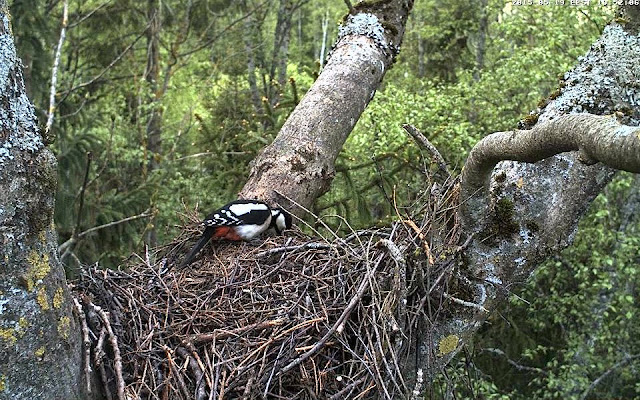 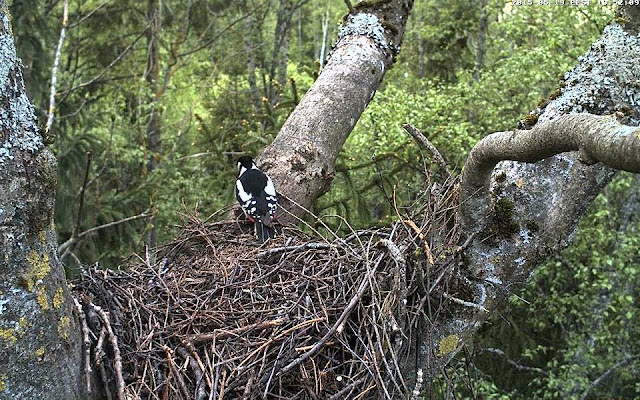 Our admin Felis silvestris was so quick that I even did not arrive back form Honey Buzzard place before the topic is launched...
We installed camera a week ago, but there was not one part in power system suitable for this cam (Mobotix M24), so we needed to order it and just today was able to place that.
Week ago we observed one (my first this season) Honey Buzzard in area, but probably not bird of that territory. So we can wait together another representative of set of birds of the year 2015 in Estonia, the Buzzards.
But nothing in nature can be surely in one way (like we want to see).
Top

Thank you, Urmas, and now we must be waiting, how the things will be come.
The nature needs us not, but we need the nature
Top

Urmas wrote:Our admin Felis silvestris was so quick that I even did not arrive back form Honey Buzzard place before the topic is launched...

Sunday, May 24
a small visitor, not exactly it is, could be a Warbler 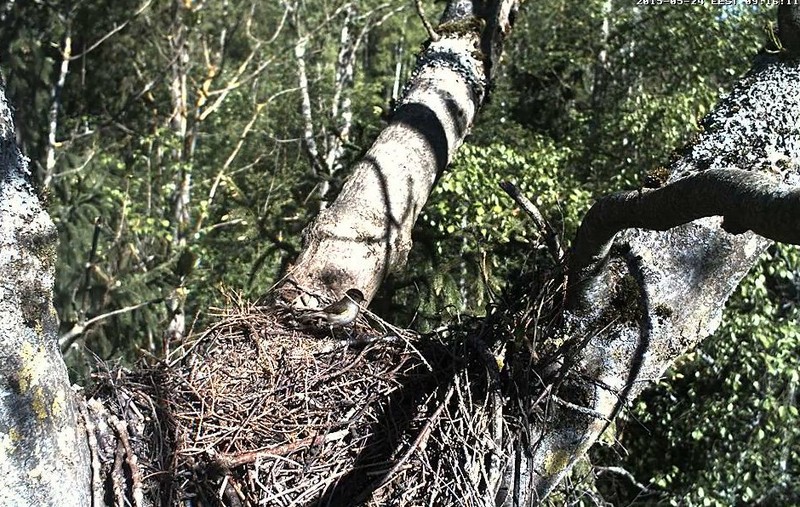 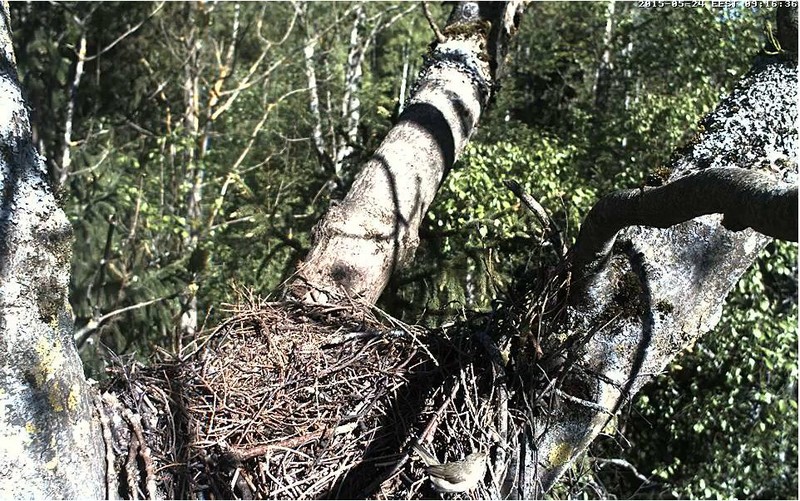 10:40 the honey buzzard is already here 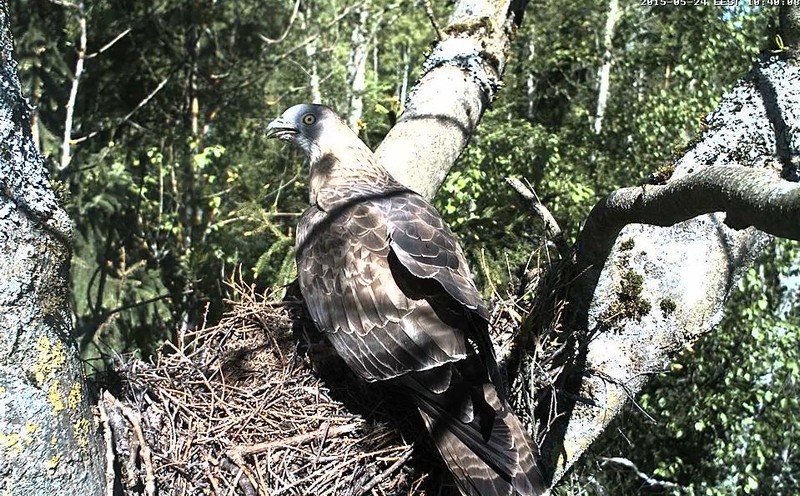 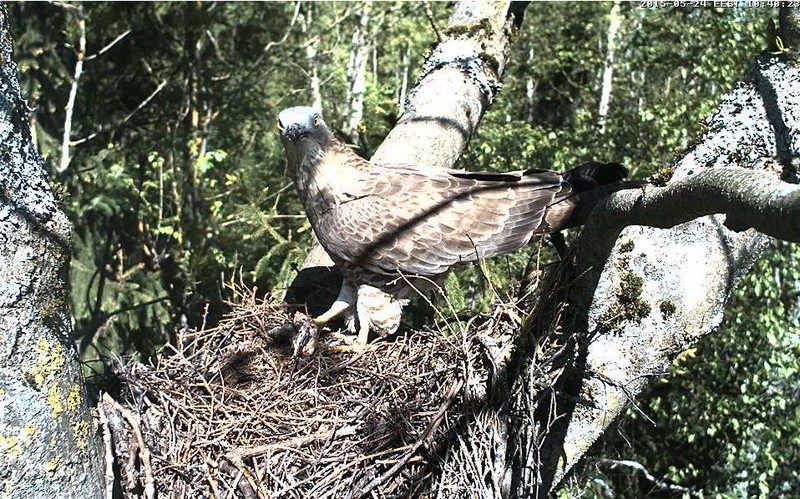 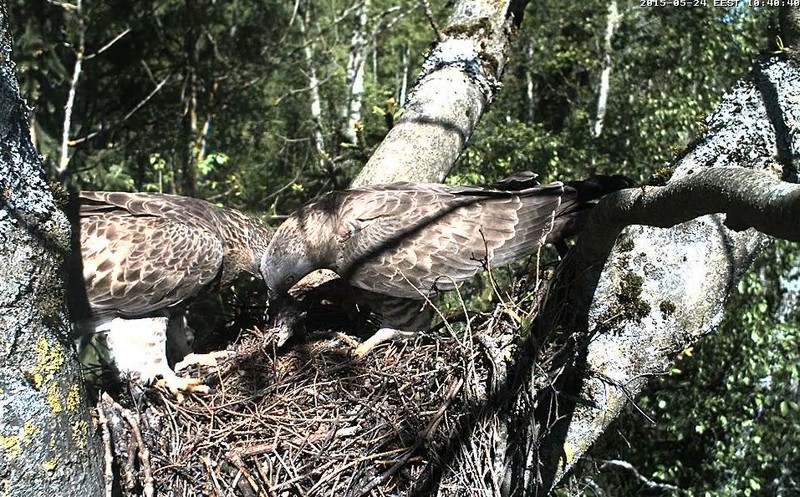 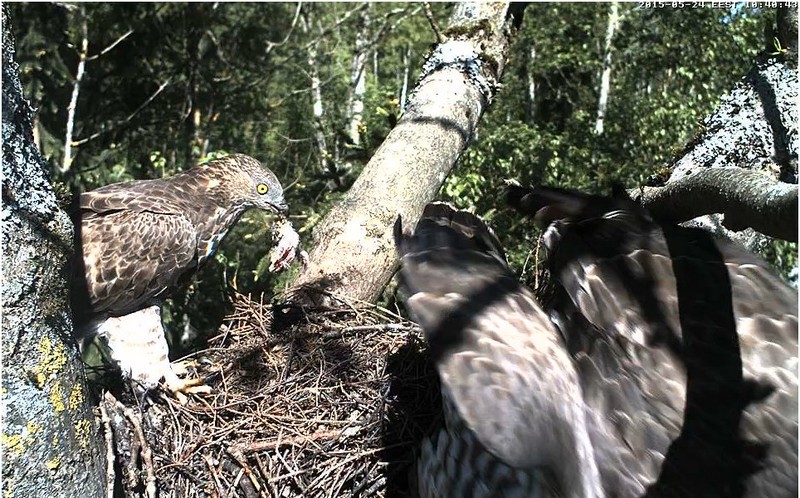 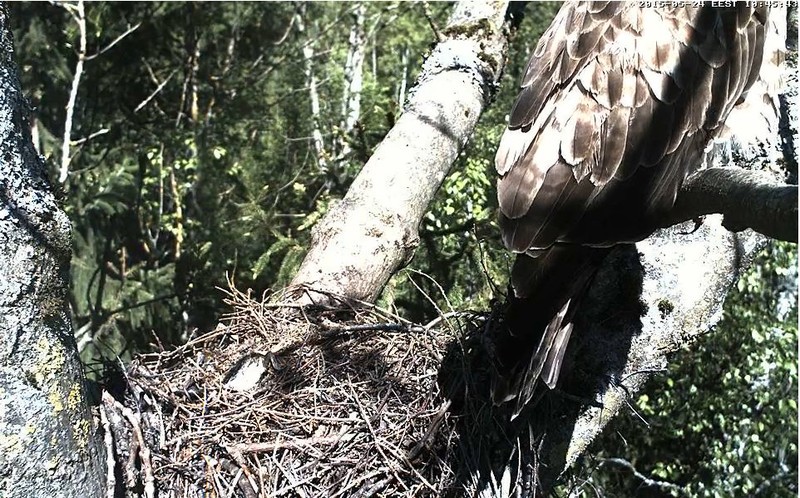 Wow, airras! You got them both! How wonderful! This looks absolutely super!
“One can measure the greatness and the moral progress of a nation by looking at how it treats its animals” (Mahatma Gandhi)
"You can judge a man's true character by the way he treats his fellow animals" (Paul McCartney)

And food was exchanged! This is really promising!
“One can measure the greatness and the moral progress of a nation by looking at how it treats its animals” (Mahatma Gandhi)
"You can judge a man's true character by the way he treats his fellow animals" (Paul McCartney)

What food was it - a bird?
Nature does nothing in vain (Aristoteles)
Top

wow, and another cam. Great