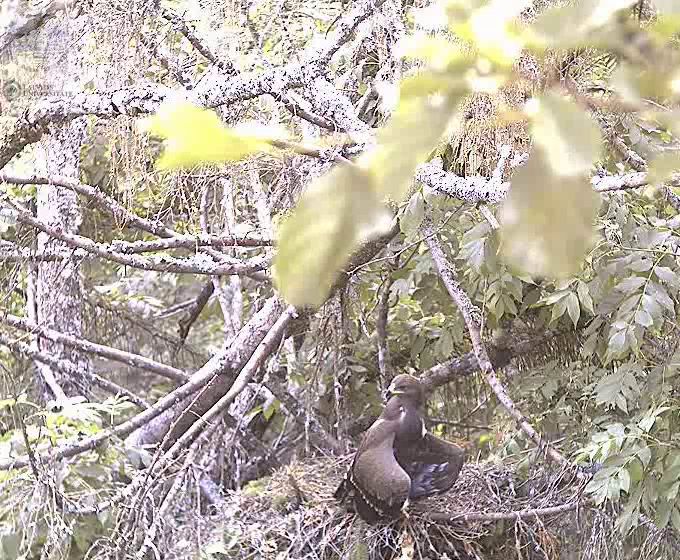 I love this image of Guste.

It shows how strong & fine her muscles are, how she is becoming ready for the wider world.
Kitty KCMO
Top

Guste is chirping for breakfast. She flew (yes, for sure, she flew) from a branch somewhere near the camera, as if she had been sitting next to it across from the nest, & she landed on the left part of the large limb that runs across top of the screen. I could then only see a bit of her wing. Then she made her way into the branches she has been sitting in before. Now she is sitting above the nest & grooming herself while still calling parents for breakfast.

Edit: And then suddenly she drops into the nest. There may actually already be a prey there because it looks like she is eating. I just came on & didn't see a prey delivered, but it may have been beforehand.

Edit: 6:50-- A parent brought a prey, but I could not tell what it was. A small bird began flitting through the branches distracting Guste.
Kitty KCMO
Top

Has anyone seen or heard Guste since I saw her earlier this morning? I logged on during this past hour & haven't heard nor seen anything. There is an empty atmosphere to the nest. Has she finally gone into the world? She definitely flew fairly well when I saw her this morning.
Kitty KCMO
Top

I hear Guste calling early this morning, & she sounds some distance away from the nest tree. I think she is now a fledgling, not simply a "brancher."

Hello everybody! No Guste at this picture but a nice green view for a change. The wind is getting stronger and I hope the camera will be strong enough to send us images untill the evening when Guste will come to the nest.
Top

☺ Just in time...cam went out. Fireblade, I agree with Kitty. That's a beautiful picture because it shows all her muscles so clearly. She looks a very healthy and strong bird.
Top

Some minutes before I met this picture at the Latvian LSE Webcam: Is this perhaps the LSE family from Eestland?
I am a bit puzzled.
Greetings from Bleggi
Top

I checked this cam about 2 hours ago & at that time there was the image of a computer screen desktop with file folders. It was similar to what we had a few weeks ago when the camera went off-line for several days. I recall that they did eventually put up a still picture of little "snowball" Guste while they worked on the cam. Perhaps that is what they are doing again. But it does look like a different view this time than we have seen before.
Kitty KCMO
Top

Bleggi wrote:Some minutes before I met this picture at the Latvian LSE Webcam:

Is this perhaps the LSE family from Eestland?
I am a bit puzzled.
Greetings from Bleggi

The view looks like the Estonian LSE webcam from last year ?

Then it is SPOT

oliv wrote:Then it is SPOT

this is definitely young Spot and Eha!

nice to see them again.

i believe that the storm ( now is said it was a "derecho" ) which hit us on Sunday evening has done damage in the Latvian LSE nest area too, hopefully the nest is OK, but there may be electricity problems

A derecho is a terrible storm, very destructive. Here in the USA the TV weather forecasters also call it a "bow echo" for how the extreme winds cause a bowed-out radar image. It shows part of the line of storms racing ahead of all the rest of the storms. We have them fairly often here in the middle part of America & often have tornadoes associated with them. I hope our Guste & her parents are OK & not harmed by the bad weather. It is hard to wait to see if the camera goes up again, & even if it does, will we learn the fate of our LSEs?

Oh, still no camera. I fear the season of watching the LSEs is over.

Hello everybody! Does this cam comes back at one time or has everybody given up on it??? I miss our Guste and Mom terribly! Have a nice evening anyway.

I got information from Dr. Ugis Bergmanis. They are recovering of hurricane, but it takes still quite a lot time to be fully OK.
By Ugis the juvenile went out of nest at 7th and the camera system stopped due the storm in 8th of August.
At 10th of Aug Ugis controlled the nest site and juvenile was about 100m of nest and in well condition.
They do not plan to restore webcam transmission for this season.
Top

good to hear that things are going well with Guste
It is understood that the cam is not repaired, but probably for the next year.

I have not really looked this season, but thank you for the beautiful pictures and information.
even the people who have put messages.

Urmas, thank you for the information; now we know at least what is going on. Good to hear Guste and family are allright. Thanks to everybody for being able to watch this beautiful bird and hopefully we have this chance again next year. Untill then......