Tracks of lesser spotted eagles during their migrations in 2009, depending on their maturity and birth place. Juveniles born in Latvia and translocated to Germany mostly do not follow the same route than the others, probably because they do not follow experienced adults (credits Prof. Dr. Bernd-U. Meyburg) 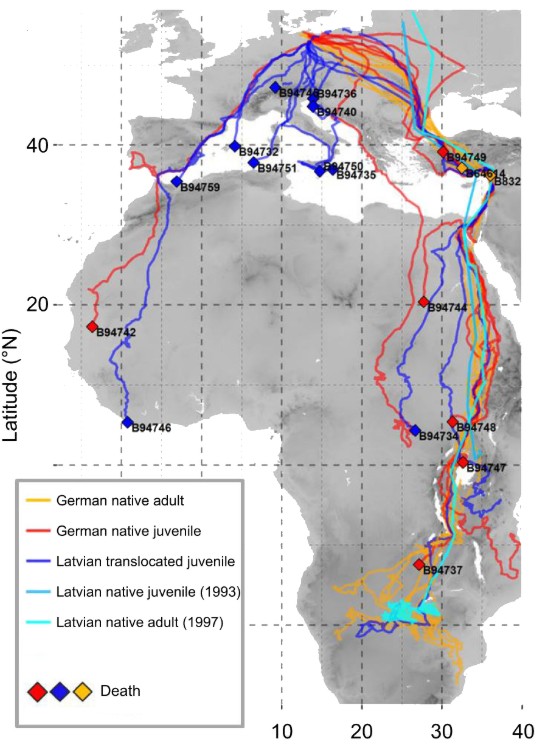 Abstract
The ontogeny of migration routines used by wild birds remains unresolved. Here we investigated the migratory orientation of juvenile lesser spotted eagles (LSE; Clanga pomarina) based on translocation and satellite tracking. Between 2004 and 2016, 85 second-hatched juveniles (Abels) were reared in captivity for release into the declining German population, including 50 birds that were translocated 940 km from Latvia. In 2009, we tracked 12 translocated juveniles, as well as eight native juveniles and nine native adults, to determine how inexperienced birds come to use strategic migration routes. Native juveniles departed around the same time as the adults and six of eight used the eastern flyway around the Mediterranean, which was used by all adults. In contrast, translocated juveniles departed on average 6 days before native LSEs, and five travelled southward and died in the central Mediterranean region. Consequently, fewer translocated juveniles (4/12) than native juveniles (7/8) reached Africa. We conclude that juvenile LSEs have a much better chance of learning the strategic southeastern flyway if they leave at an appropriate time to connect with experienced elders upon departure. It is not clear why translocated juveniles departed so early. Regardless, by the end of the year, most juveniles had perished, whether they were translocated (10/12) or not (6/8). The small number of surviving translocated juveniles thus still represents a significant increase in the annual productivity of the German LSE population in 2009.
https://www.ncbi.nlm.nih.gov/pubmed/28768749
Top

Autumn Migration of Lesser Spotted Eagle Aquila pomarina in the Strait of Gibraltar: Accidental or Regular?
The Lesser Spotted Eagle (LSE) migrates to its winter quarters via the eastern Mediterranean corridor. During 1998 to 2009, 47 LSEs have been registered in the Strait of Gibraltar during a monitoring program of bird migration. All observations were made between 6 August to 12 October (mean 16 September, median 12 September). Of thirteen age-identified LSEs, ten birds were nonjuveniles. Six out of 86 LSEs fitted with a satellite transmitter at the western limit of its distribution followed the western route. Three of those birds reached Africa via the Strait of Gibraltar. The presence of LSE in our study area, albeit in small numbers, indicates the existence of a minor migration route across the Iberian Peninsula.

Info about LSE
What is the life of lesser spotted eagle like? What does it eat? How does it behave while nesting? Webcams are a tool that allows to follow the life of birds very closely. The obtained information can be useful for researchers in order to understand better the behaviour and habit of birds.

Therefore we have installed two webcams at lesser spotted eagle nests in Latvia. The first broadcasting season was in 2018.

One camera is located in a spruce in Zemgale region. In this nest a young bird was observed in summer of 2018. The construction of the nest allows to asume that this nesting place has been used by lesser spotted eagles already for some time.

The other nest that is broadcasted by webcam is location in birch tree in Zemgale region. The nest is known since July 2017 when there was observed one young bird. It is located in a birch tree approximately 20 meters from ground. The nest could be at least 5 years old.

In 2018 the nesting did not happen. In the spruce nest the eagle was observed several times, the birch nest was more often inhibited – several birds were observed there during spring, later a pair of eagles spent there some more time and even decorated the nest with spruce and pine needles. The pair was observed in the nest up until August.

In 2019 the broadcasting was resumed in March. 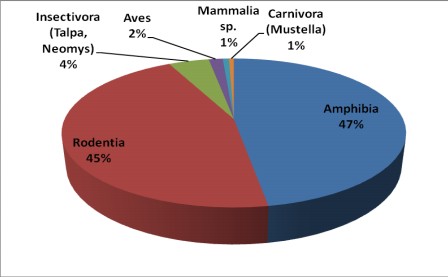 I congratulate us all! Yesterday 's situation led to Nordry registering at the forum.

Fascinating articles, Liz01, thank you for sharing!
It is so amazing how far these birds travel.


I congratulate us all! Yesterday 's situation led to Nordry registering at the forum.

Yay! That is wonderful news! Hopefully, we will have a chance to see more of Nordri’s beautiful creations here on the forum!
Top

(Grinč is out from camera view)
Top

On the Baltic Sea, there is a lesser spotted eagle opera.

It is based on Lesser Spotted Eagle Rainer, who was tagged with a transmitter in 2009 and perished in 2017 on the flight to the south.

Greifswald / Marlow (dpa / mv) - The lesser spotted eagle has managed what no other animal in Germany has done so far: He has become the main character of an opera. The play, which will be premiered on Saturday at Vogelpark Marlow near Rostock, tells the story of an authentic lesser spotted eagle from birth in 2009 near Neubrandenburg until his death in 2017 on his flight to the south. The work «Clanga pomarina. Die Schreiadleroper »is a project of the Opernale Institute based in Sundhagen (Western Pomerania-Rügen).

Since 2011 it brings almost annually an opera on unusual rural stages in Western Pomerania. Performers are three opera singers and two puppeteers. They alternately give shape and voice to the eagle. The composer Benjamin Saupe uses different styles of music for the opera - arias, jazz, Arabic songs and hits.
https://www.welt.de/regionales/mecklenb ... lpark.html


On the basis of press reports, specialist articles, interviews with ornithologists and the recorded life data of the lesser spotted eagle Rainer, a fictive opera about the life of the rare bird of prey is created. The whole thing is implemented not only with the classical means of music theater - vocals, instrumental music and scenic presentation - but also through puppet play.
https://opernale.de/events/festival/

If someone is interested. On the 6th of September there will be a performance in Ribnitz Damgarten. I will go there if everything goes well. Unfortunately I have to go back to Berlin.
Top

17:19 Grincs is calling very near the nest
Top

8:17 Grincs is calling since early morning.
8:34 sounds like a feeding 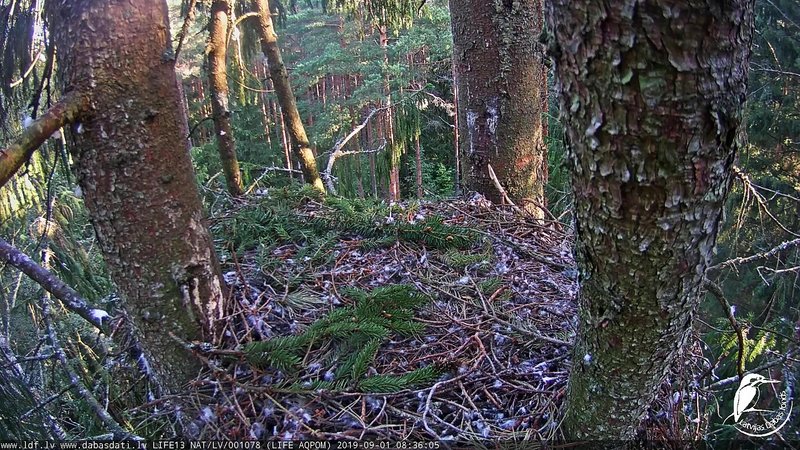 Liz and Solo, thanks for reporting. And thank you Liz for the links and info

Thank you for your great work here.

Maybe we'll meet again next season. I would be very happy.

Thanks for the kind words! I've enjoyed being here in this thread, and reading all your comments and looking at the pictures and videos, they are always great.

I'm still keeping an eye/ear on the nest for a few hours in the evenings but there isn't much to report.

If I have the time I will certainly be here next season.

I hope you will find time for our Clanga pomarina

Liz,
after the siblings rivalry time (killing the younger one) it is nice to watch the nest life, especially with eaglet as our Grinč

A squirrel visit the nest. It was in a hurry 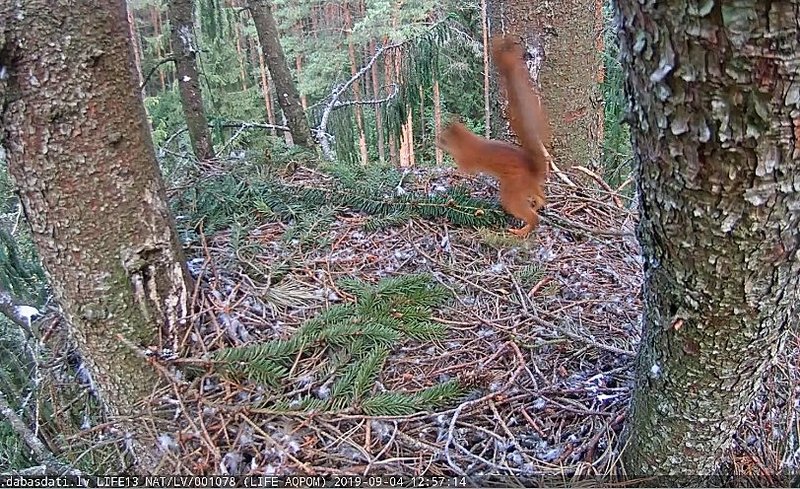 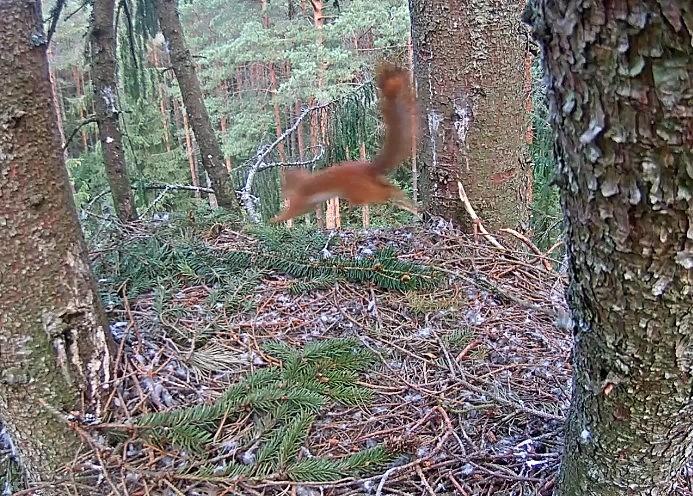 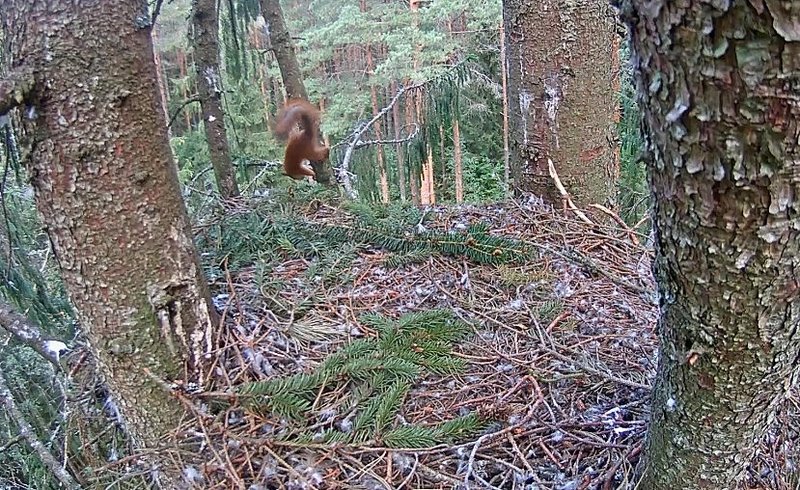 (btw. ... "there were three chicks on the Eedi's nest, they all perished before leaving the nest. The reason was probably a lack of food." ... by Urmas


Good Morning Solo and all

I am surprised that Karula Nest was so lucky. If it rains just as little this fall and spring as the last two years, then it will slowly become dangerous for all large birds that need water and wet meadows. This year, many birds have starved to death everywhere.

This year lucky is the only BS family from puszcza Notecka in Poland. Karula nest is rather far from being "lucky": only 2 of 5 family members managed to survive by the beginning of the season, only half of the storklets survived this season, one of them injured. It is less unhappy but not "lucky". Also Gaya and Kaupo couple are lucky: they didn't breed in hard season and nobody died.

Urmas wrote that all storklets in Poland fledged, but forgot to mention that one chick in Dab nest was also caught by the goshawk.
Top

9:53 Anna and Grincs are calling. I think it was Anna. and then I could hear a feeding.


asteria wrote: ↑September 5th, 2019, 9:06 am This year lucky is the only BS family from puszcza Notecka in Poland. Karula nest is rather far from being "lucky"...

asteria, you're right. But two storklets are better than none. I hope very much, that Aru will make it!
With "luck" I meant, that we did not have to watch how chicks starve to death.
Top

I would call it "less unhappy". Two deaths are not that bad as three deaths but it is still very bad by itself.
Top
Locked
1646 posts