I have another sighting from August 10th.
The last Osprey I saw here ...

09:39:07 chirping can be heard.
An Osprey is on the camera, jumping down into the nest. Red ring - but not Vita. It's G52 again. G52 continues chirping, another Osprey approaches the nest but just flies over it.

Grass covers the nest of Teo and Vita. It seems both are now finally drawn.

The only daily visitor is this squirrel. It actually comes every day. 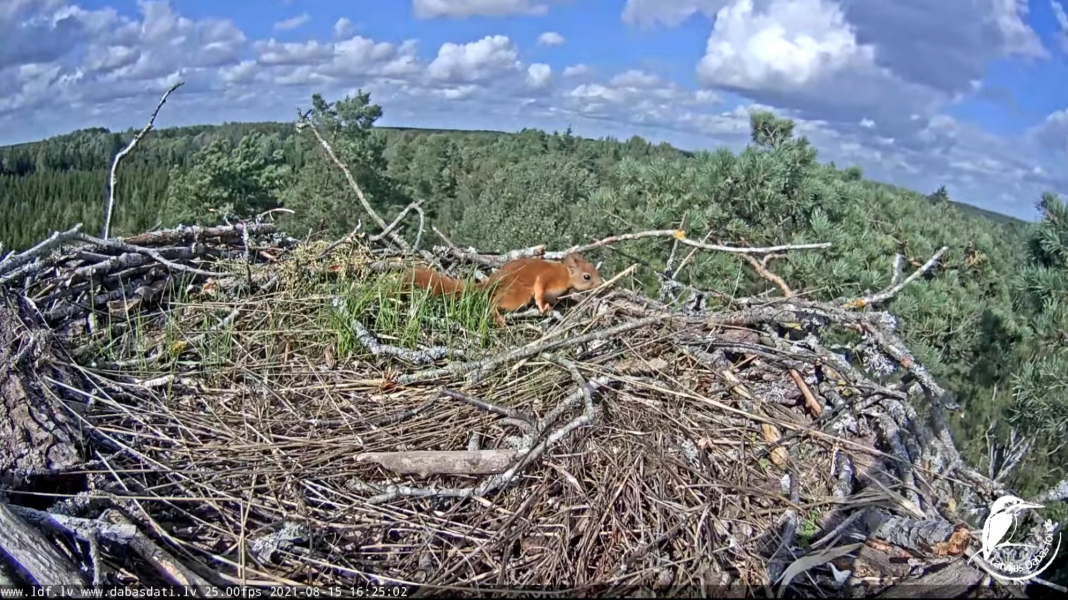 A healthy time to all of you and a safe journey for our Ospreys.


JSC “Latvijas valsts meži” (LVM) environmental experts surveyed more than 200 osprey nests throughout the territory of Latvia, the 15th osprey monitoring season has ended. The obtained data show that this year the nesting success of the Latvian osprey population has been good.

This year, a record number of osprey nests has been identified - 161, which is the largest in the history of monitoring. Until now, the most populated nests were identified in 2019, when their number reached 158.

“This year, eight new, hitherto unknown, osprey nests have been opened, six of which are located in the forests managed by LVM. This year, for the first time in Latvia, it has been established that an osprey nests in a pole of a high-voltage power line. So far, such cases have been detected in neighboring countries and elsewhere in Europe - Lithuania, Estonia, Belarus, Poland, Finland and Germany - but not in Latvia, ”says LVM environmental expert Aigars Kalvāns.

As part of bird monitoring, juvenile ospreys are counted, weighed and ringed. The data obtained are needed to evaluate the success of nesting. The latest technologies are also coming to the fore - nine nests were tested in hard-to-reach places this year with an unmanned aerial vehicle or drone.

Osprey monitoring in Latvia has been carried out since 2007 and the total number of successful nests has more than doubled during this period. In 2007, only 41 successful osprey nests were known, now numbering almost 100. 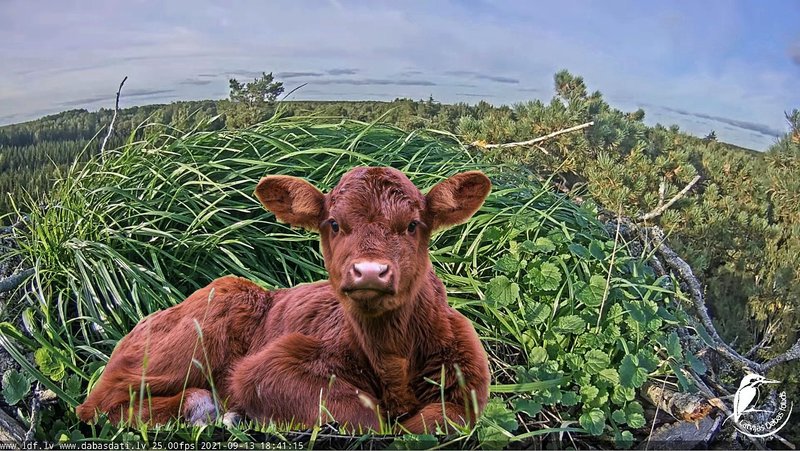 Polly thanks a lot for the great work with GT! I would say a very good translation.

I wish we had seen a successful nest here.

....yes, it has become a lush green pasture.

Certainly some readers like to ignore me, but I like to chew it again and again - the hawk stealing chicks cannot be described as general.
Here, too, I wrote it ... somewhere ... in other areas broods are apparently more successful. Or - not destroyed by the hawk, but otherwise crashed. See Goitz's wilderness ... I have to say that hit me very much. Unfortunately, it was not published until recently what caused the young birds to die.

Well what are we doing ... hope for a successful 2022 season or pray that Teo (and Vita) leave this area.

It is frustrating and painful to see fear in the chicks' eyes for the last few seconds.

Are Teo and Vita guarding enough?
I posted an interesting study this season ... I'm looking for it.
"Let nature be your teacher."
(William Wordsworth)
Top

There are definitely different defense patterns.
I don't blame Teo or Vita.
Please do not get this wrong.

But it may well be possible for Osprey to fight off a Goshawk or stay very intensely at the nest or defend it.

No matter how we try to find answers ... let's look at Marko & Miina.

Incidentally, I missed Teo's intensive work in the nest before the migration.

This year was different ...

Just a FYI. A Buteo is a type of Hawk. Buzzards are Buteos. Buzzards and Red-tailed Hawks are closely related and both, Buteos.

While this article does not cover European birds, the explanation is there.

Buteos
Buteos are commonly referred to as "soaring hawks." Their wings are long but broad, and they have somewhat short tails. Some buteos are longer-winged and slimmer overall than others, and there is a significant range in size from the largest buteos to the smallest ones. Because buteos are often observed soaring overhead, or perched in conspicuous places, such as the edge of a tree line or alongside a road, they are among the most familiar hawks. The Red-tailed Hawk is the most common, widespread, and well-known buteo, whereas a few species, such as the Common Black Hawk and Gray Hawk are range-restricted and lesser known. Buteos often seen at HWI migration sites are: Broad-winged, Swainson's, Red-tailed, Rough-legged, and Ferruginous Hawks. Some species have highly variable plumages ranging from light to dark below, some come in only one color morph. Buteos hunt in various ways, sometimes dropping to the ground from a high perch to capture prey, or from high in the sky surprising and overtaking prey from a high-speed stoop. Most buteos prey primarily on small mammals, but all will take small birds, reptiles, and even insects if the opportunity arises. Sometimes buteos are seen soaring in large flocks or "kettles" on migration, especially Broad-winged and Swainson's Hawks. Thousands of Broad-winged Hawks can be seen at one time at a few migration sites in the North America. Most buteos attain adult appearance in their second year, for a few it takes a year or two longer.