11:39 he lay down again. the eyes look rather dark (if one can see the colour properly in this light). the centre spots of the tail are large. 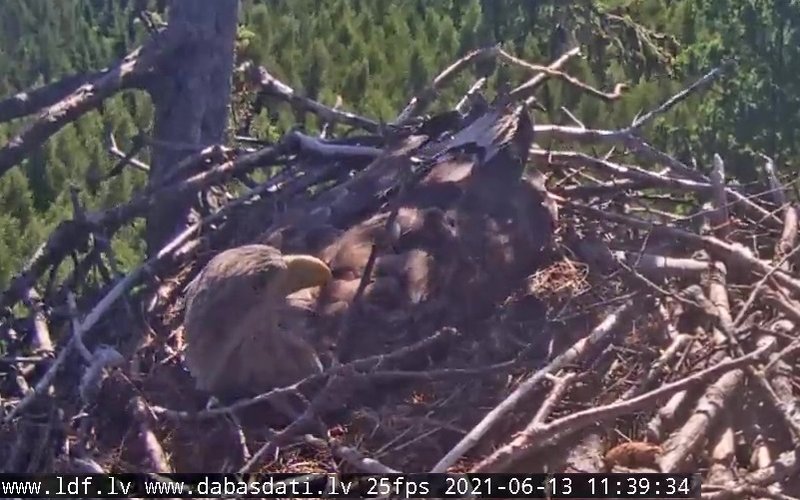 the tips of the tail feathers are dark. this is a young eagle. maybe 4-5 CY. 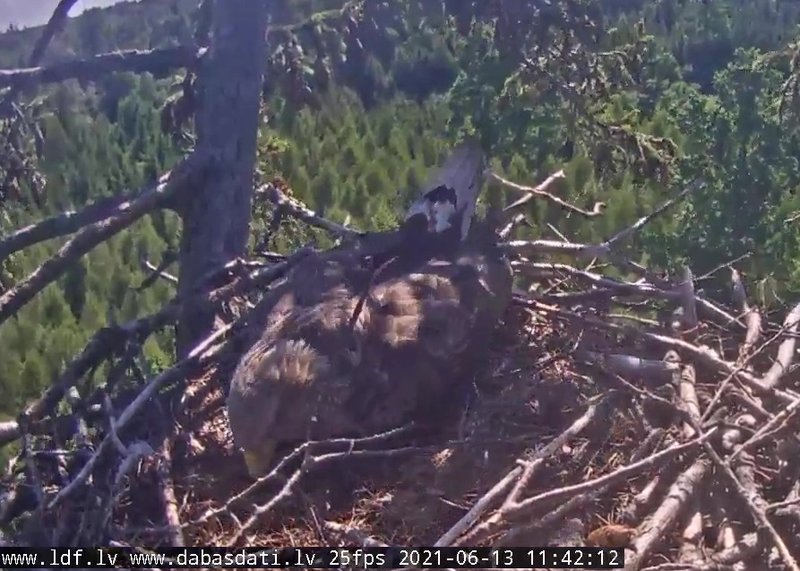 a few minutes ago i heard a blue tit come to scold the eagle: "what are you doing here? go away!"

12:28 the eagle got up and dug the nest bottom... then he went to the back rim. he began to preen. the outer edges of the tail feathers were quite dark still. then the eagle lay down again.
Top 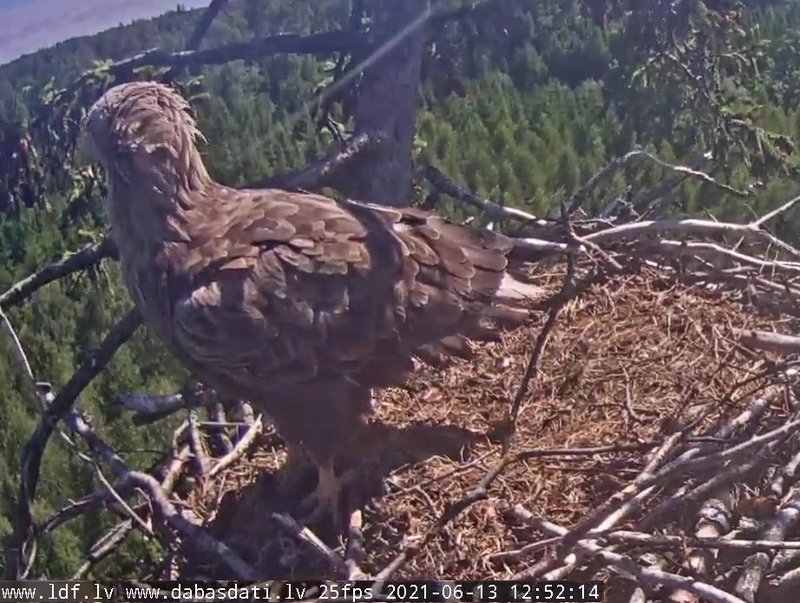 on his departure he didn't show his tail properly. 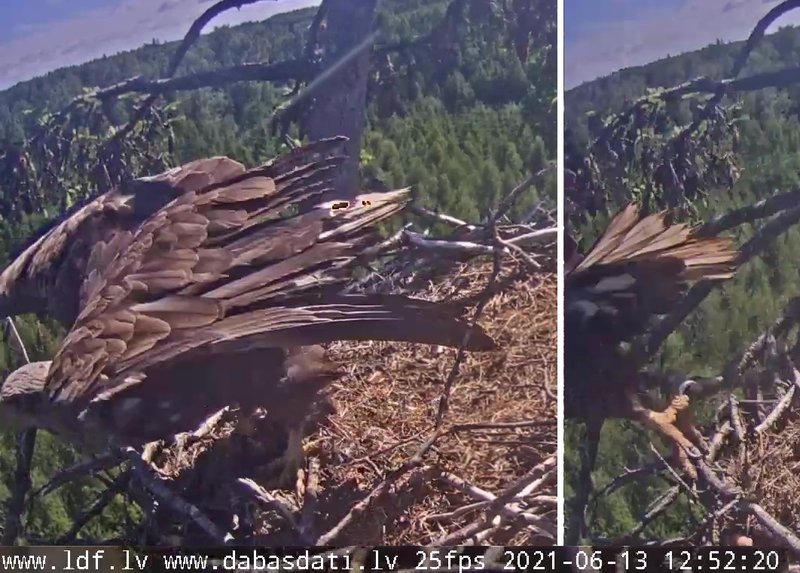 Indeed, it had pitch dark eyes, so to speak - they were well visible for a moment when it looked straight into the camera at 11:44 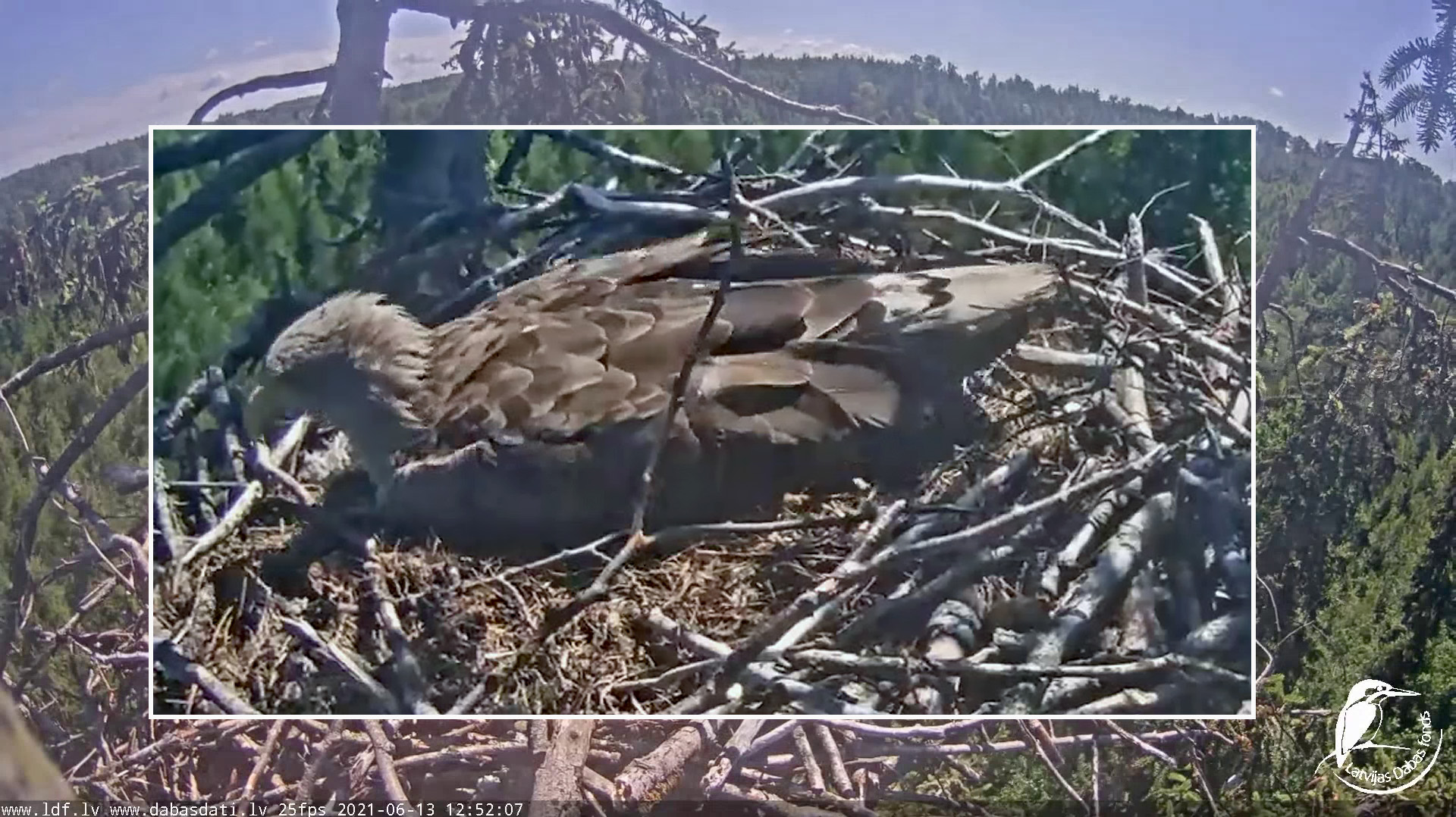 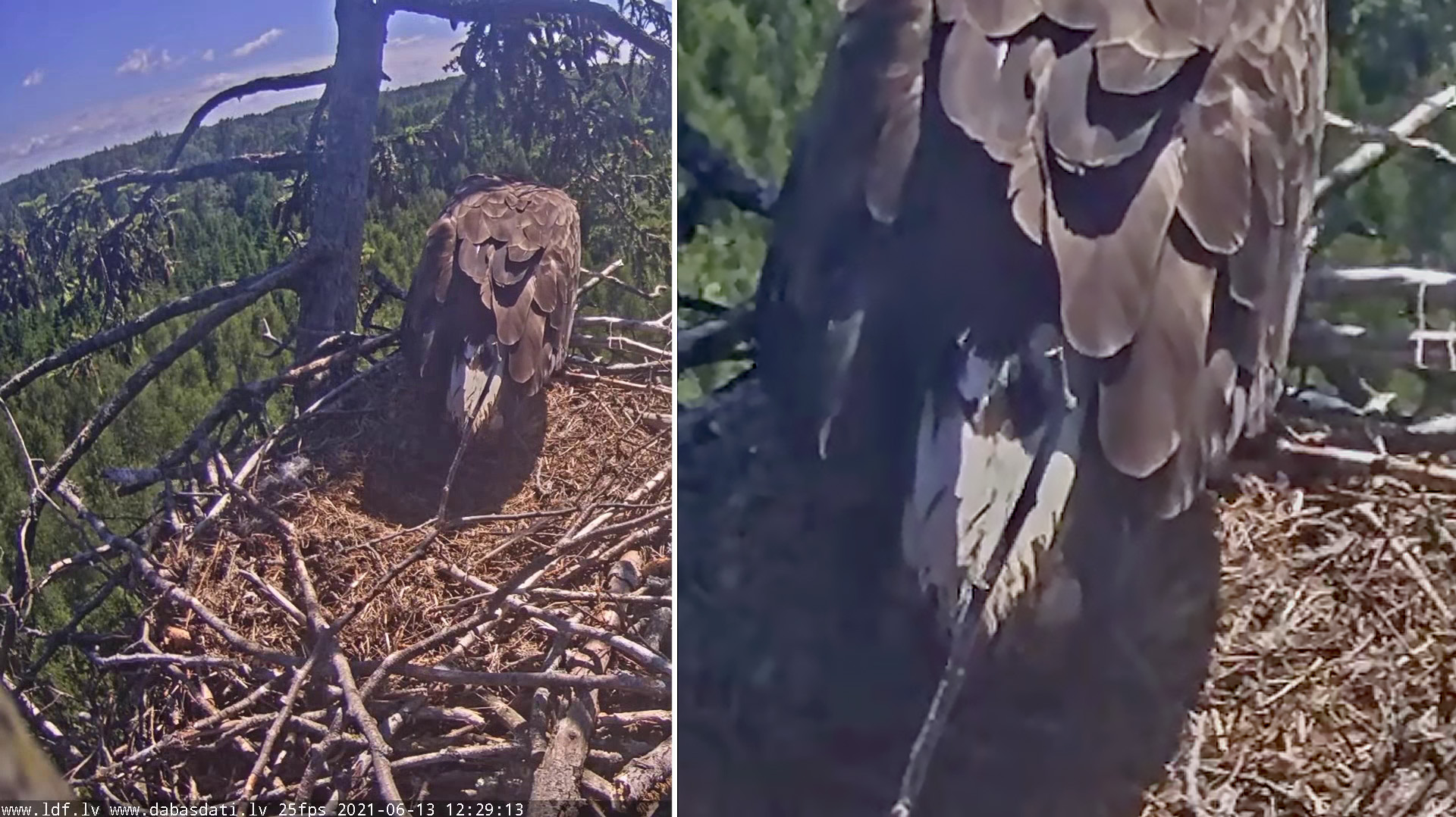 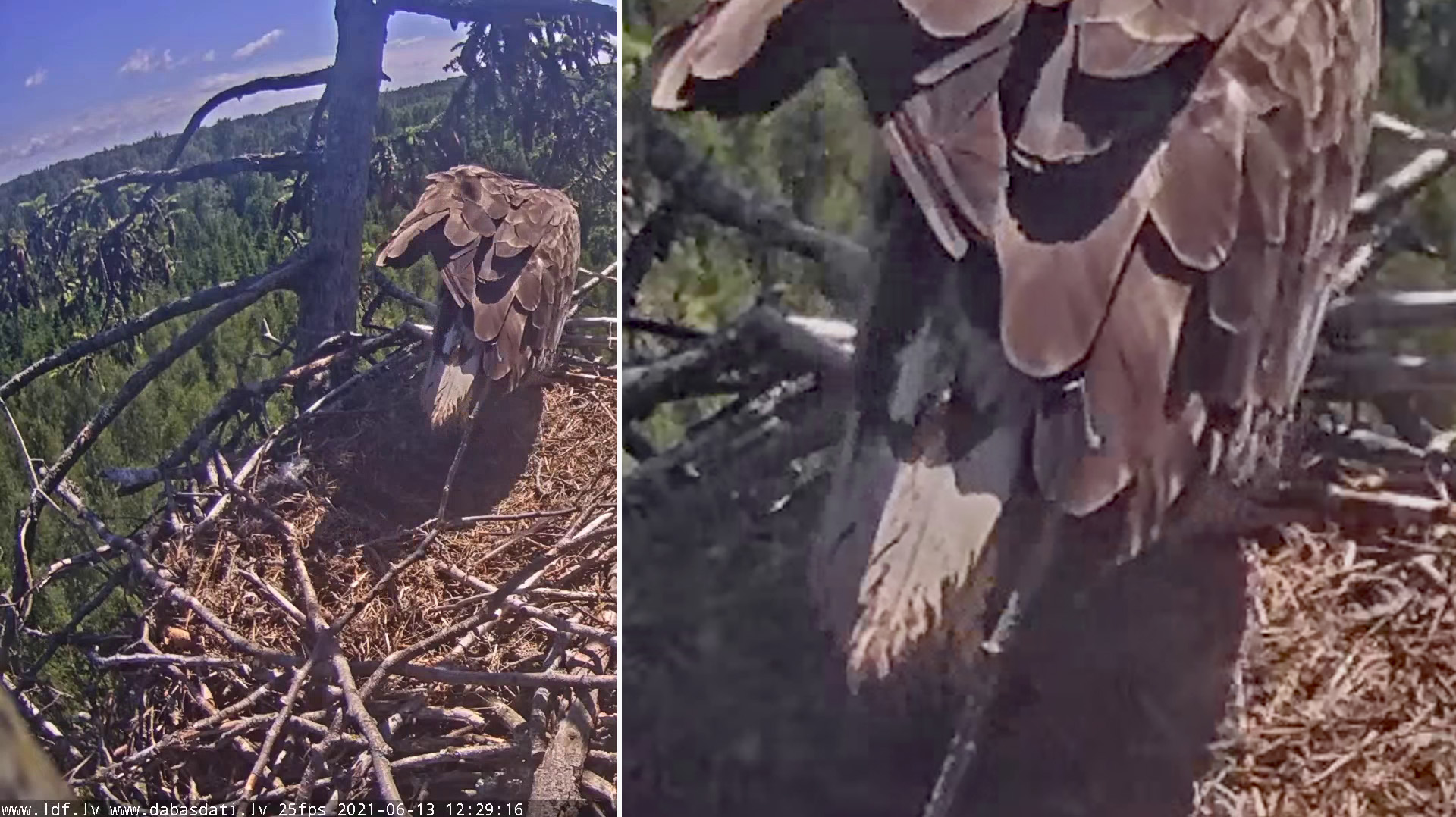 i made a picture of his eyes, too. they were quite the opposite to Chips' eyes. Chips eyes looked like he had a lamp inside his head and the light was shining out through his eyes. this eagle looked as if he had an "anti-lamp" inside his head, absorbing all light in from the outside.

this picture shows that his eyes were normal after all, although the iris was still very dark. it's funny how the different features of the appearance of eagles mature in so different paces. his beak was already quite light. 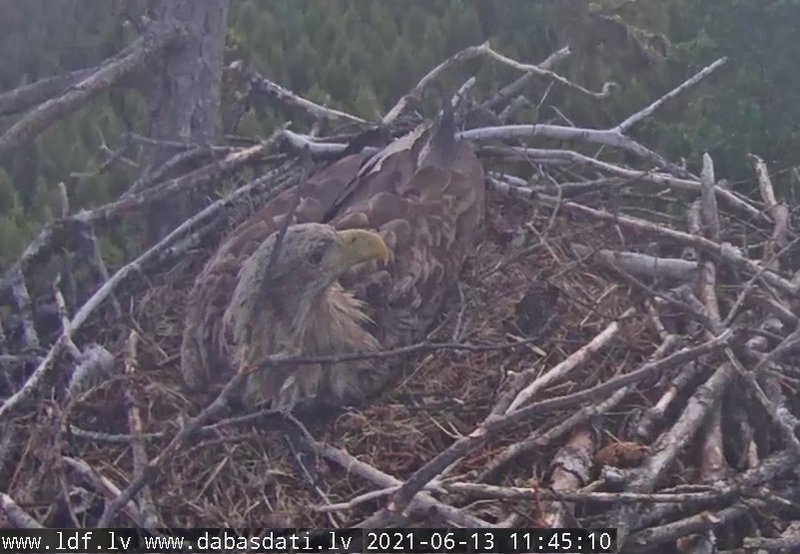 21:51 a blackbird visited the front right rim of the nest.

Good to see eagles again... Where are you Milda? Will you come back to us??

On the EST nest there is a very young eagle who came yesterday afternoon, slept on the nest and is still there now. Very cute but too young for a nest...
Top

good morning!
it's nice to hear that at least someone visits the Estonian nest. (i'd ike best if i heard that Eve or Eerik were seen there...)

the night was very quiet. i could hear a tawny owl male calling a few times but he was so far that the voice was barely audible.
Top

5:23 a squirrel visited. this looked so thin and small that i think it was a "new" squirrel, born this spring. 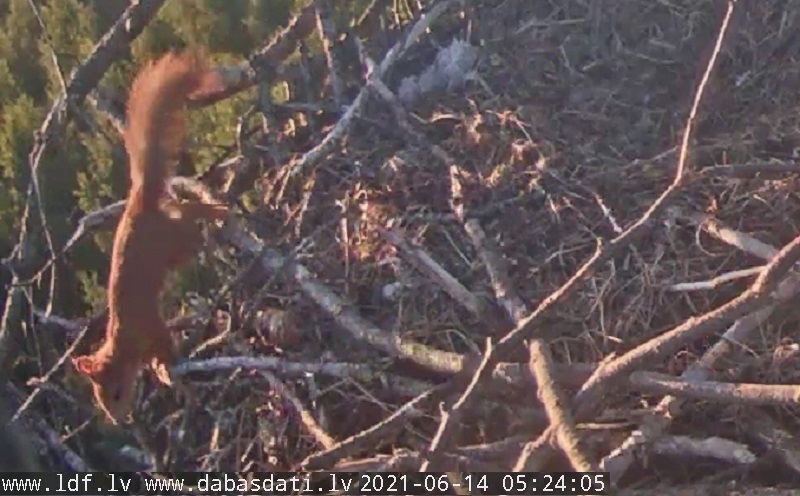 
7:22 two little birds visited. i think they were blue tits.

I'm so glad, You are watching this nest!
Inspite of all the difficulties since Raimis vanished.

Thank You for this work!

hello AlteEule and thank you!

8:10 a blackbird sang a few verses right next to the microphone. he really shouted.

then he flew to the top.
8:10:37 his shadow moved on the the sugar cane branch.
i marked in this picture where the shadow can be seen moving. 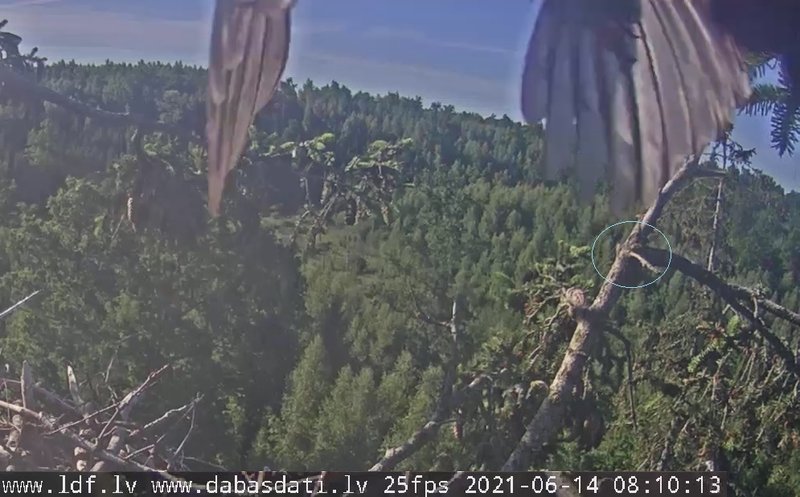 after a while he sang more.

buzzard's calls and
13:25:25 a big bird in the upper left corner.
... this is very strange: i can't find the voices in the recording but instead i found two big birds in the sky. their flight looked like eagle's flight. under the bird on the right (at 7 o'clock) there is a dot which is an "after-image" of the bird. it's not anything real, not even an insect.

i searched 6 minutes both before and after the birds were visible but i found no voices in the recording. the calls had to come from outside my window. what a coincidence!

here my sound and picture were misplaced! the sound was missing for 14 min 47 s in the end of the recording. the noises were much earlier. i don't understand how this could happen.


i also found the buzzard calls almost 15 min earlier than they actually were heard. below Sonchik has a recording with the sounds in the right place.
Top

it was somewhat windy in the night so it's difficult to find any voices or special sounds between the gusts of wind.

after 5 it rained hard for a while.

thank you Sonchik for the observations!
i don't know what is wrong with my recording. i still can't find the buzzard voices there. i have two recordings of that time and the voices and on neither of them.

my picture and time were more than 14 min offset! how is that possible??