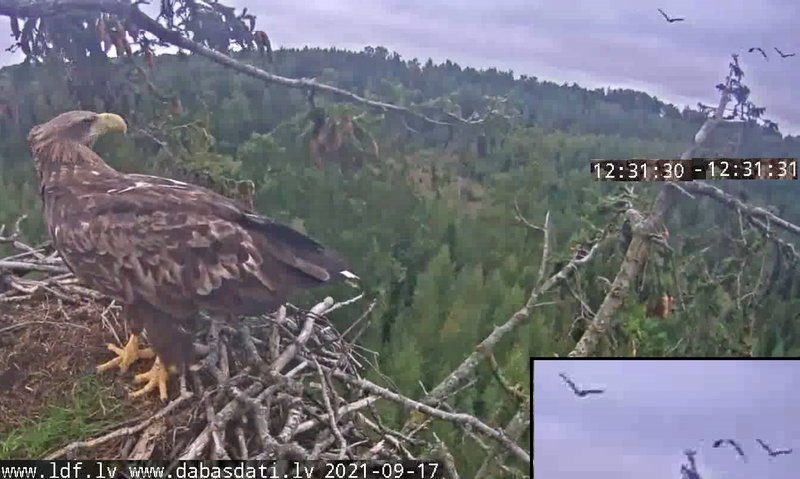 the youngster looked to the right for a long time. he looked a bit upset. wasn't the other eagle his friend after all?

(i don't think that the other eagle was either of our eagles. they would have come and chase him away).
Top

thank you Nordri for the video.

it summarises the visits in short.

i have a question about the video: did you tune the colours in some way? the forest looks much more yellow than in my recording.

yesterday it seemed to me for the first time that some trees have a faint touch of yellow but they aren't so yellow yet, are they?
Top 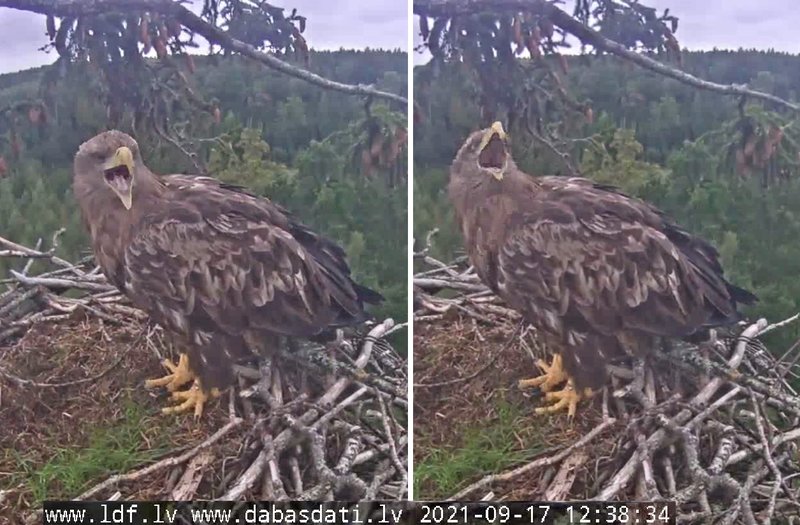 12:42 a nuthatch called somewhere very near but out of sight. the eagle preened... his back is still very spotty.

12:51 the eagle yawned again. then he took up a stick but continued preening.

13:05 the eagle saw something interesting on the right.... 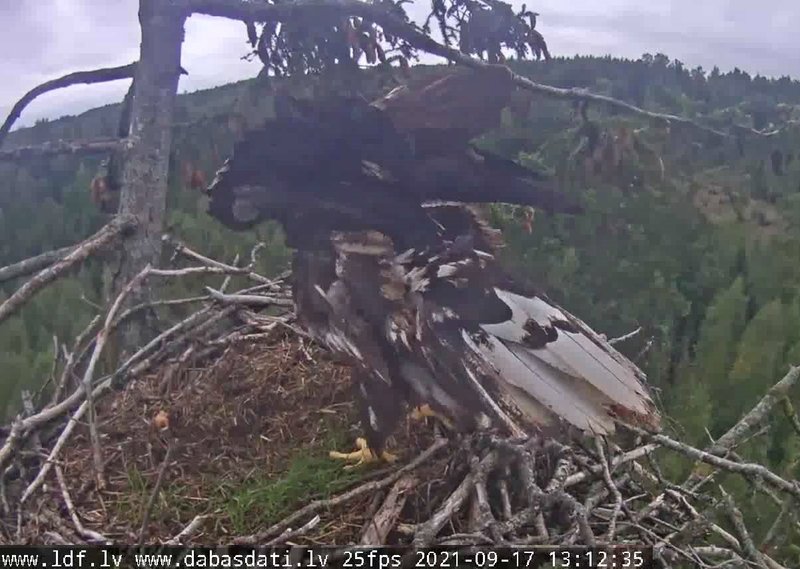 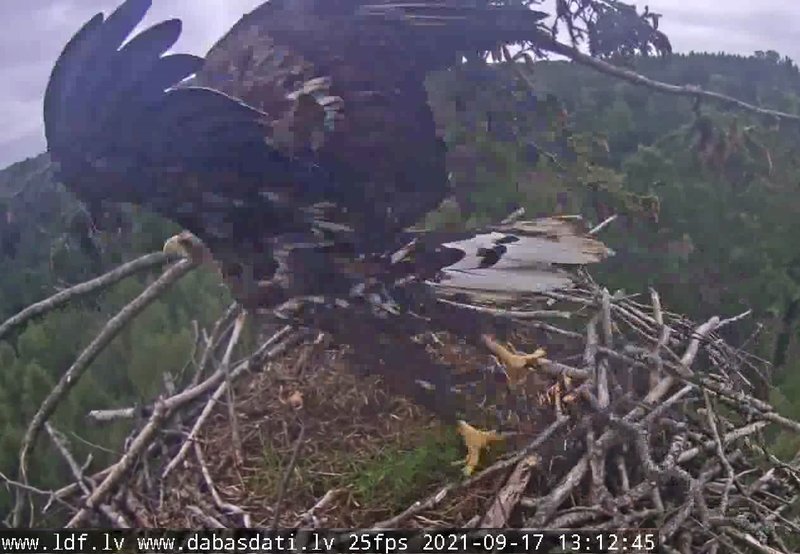 i take the opportunity to demonstrate what kind on manipulation i have often done.

on the left side is the cleaned picture and on the right side is the original picture. i copied the top left corner from the next frame in the video and pasted it on the picture. 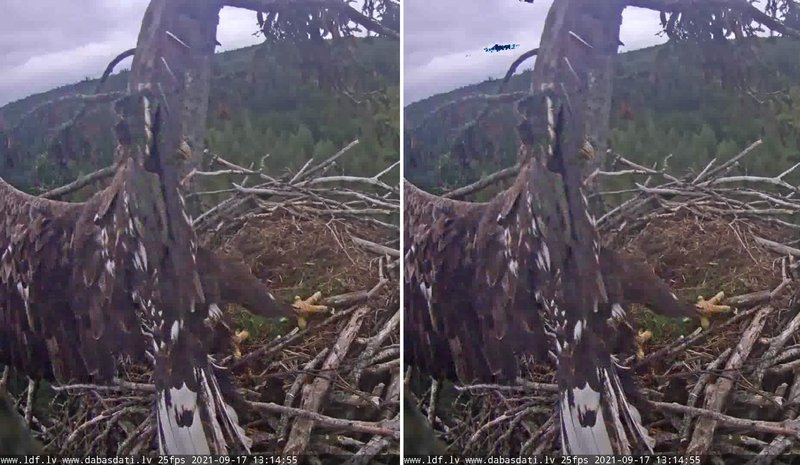 13:15 he looked at something very near the camera but not quite at it. 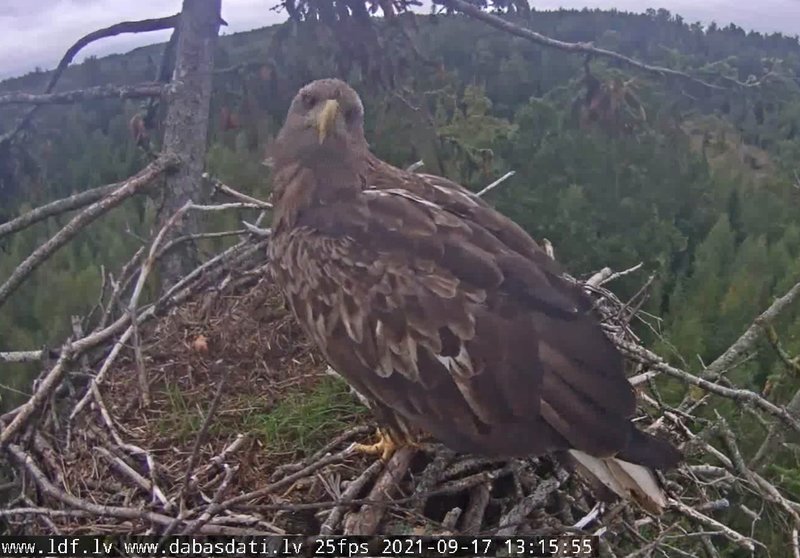 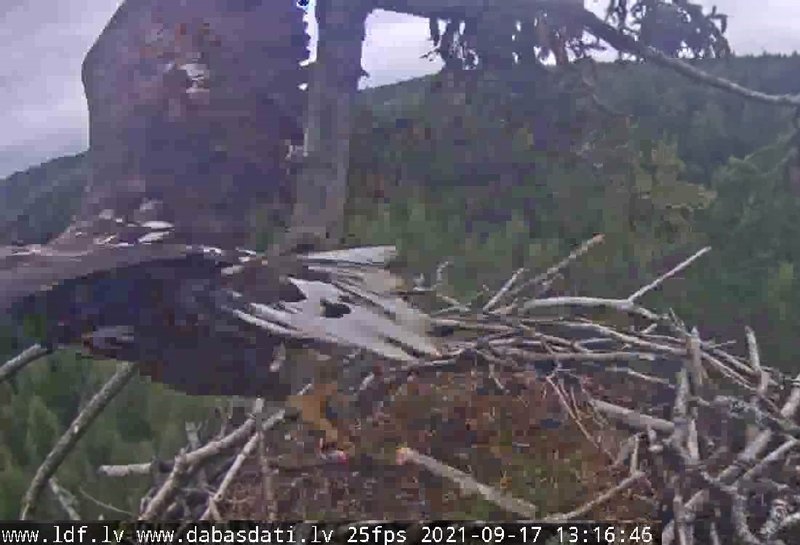 this picture needed more than one copy-pasting of the top left corner. 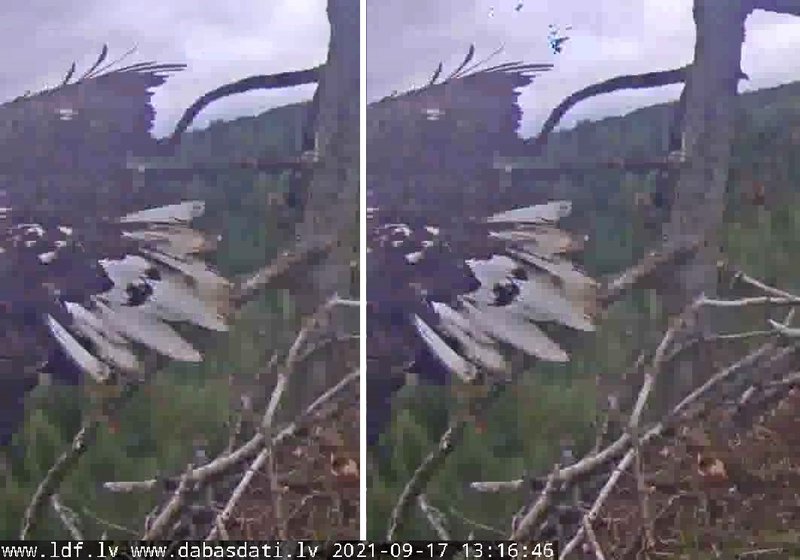 i have a question about the video: ..

The video editor has many color correction functions. I select the option to suit the mood. Today it is already cold and autumn. Here is the result)
more precisely, in many cameras, the level of the blue channel is overestimated.and purple. When you reduce it in the editor, more yellow appears in the green spectrum. You can remove yellow, but I like it more
Top

aha, thank you Nordri for the explanation.
so there was artist's work involved.

i would like to ask that if such artistic manipulation is used in the making of videos or pictures it would be mentioned. in that case it's not a "real" document of the events.
(i must admit at this point that i have sometimes "forged" some pictures. i have often removed the ugly stick from the top right corner or some ugly shadows from next to fast-moving wings or something similar by copying clean pieces of sky from another frame taken before or after the picture which was being "cleaned".
i have waited to see if anyone notices this but so far none. 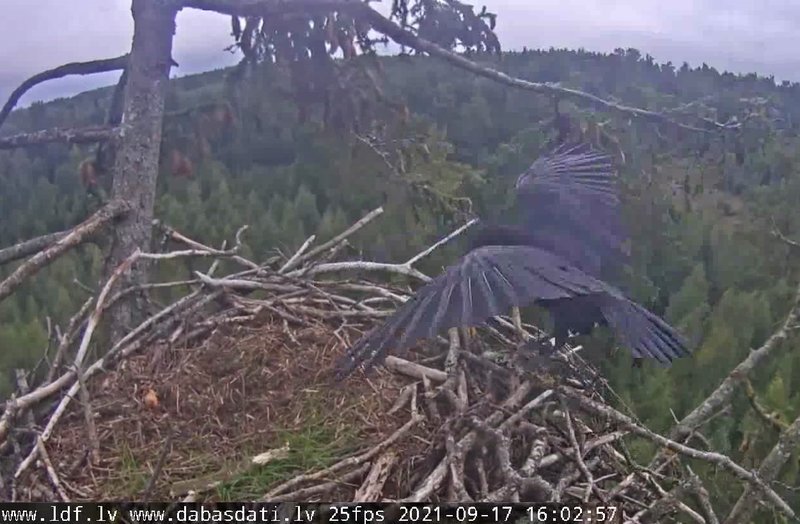 then the raven wiped his/her beak against the sticks on the nest. another raven called in the forest.

16:03 the raven went to the top branch. then to the upper left branch.
the ravens called to each other. 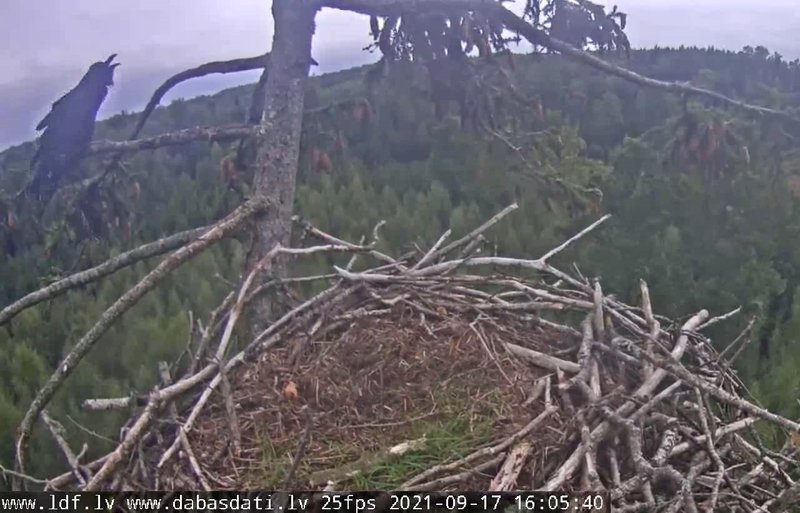 16:06 the raven returned to the nest and moved the first new stick.
did he/she notice that it was new? 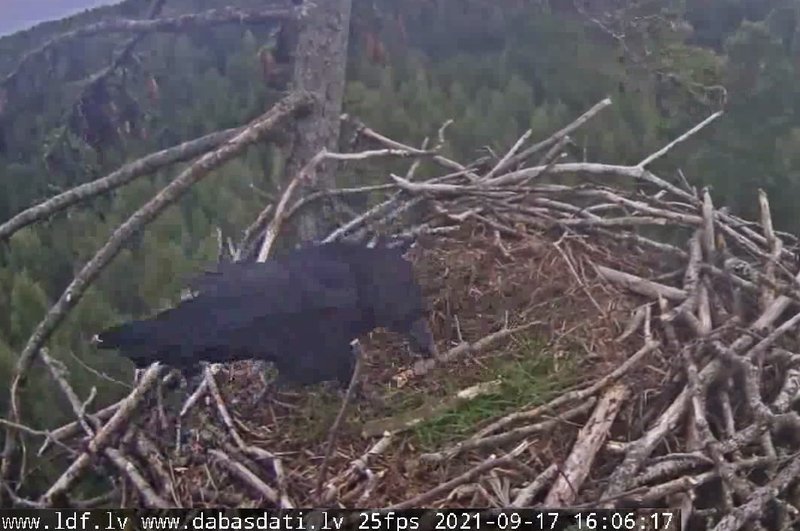 then the raven dug the nest.
then he/she jumped to the poop branch and then to the top. the ravens called to each other. 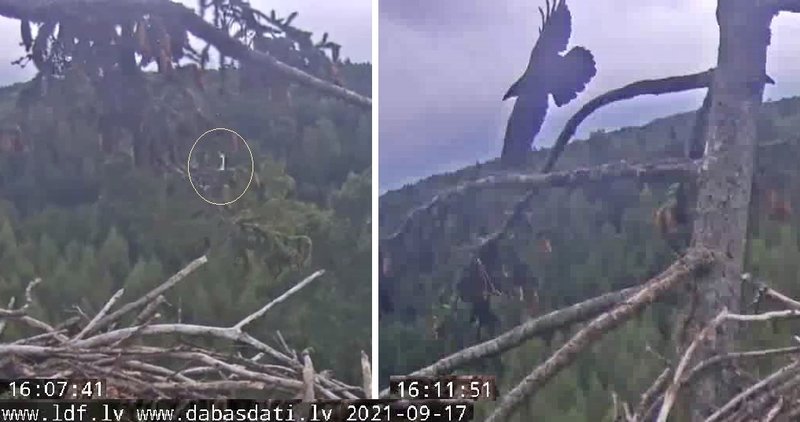 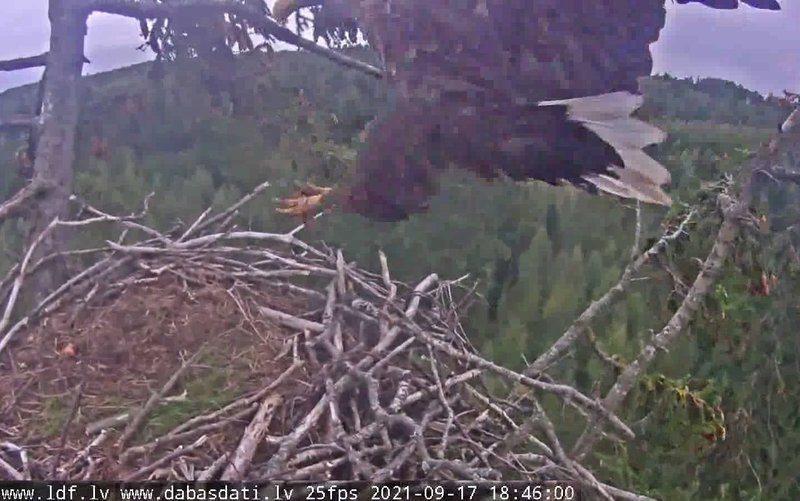 the eagle seemed to be Mr L as mega2 wrote. 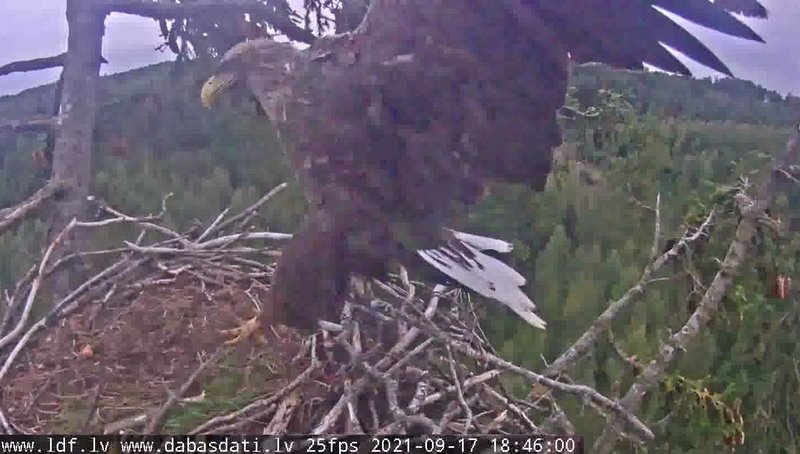 he saw the new stick and moved it. "someone has been sleeping in my bed." 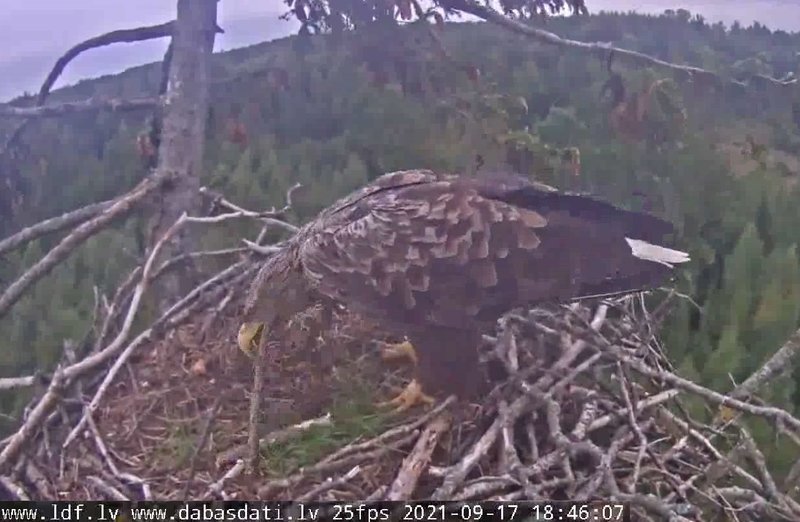 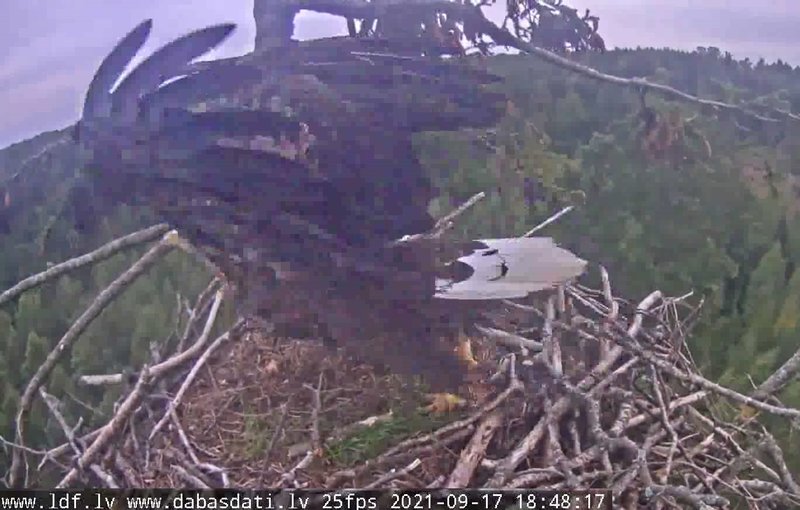 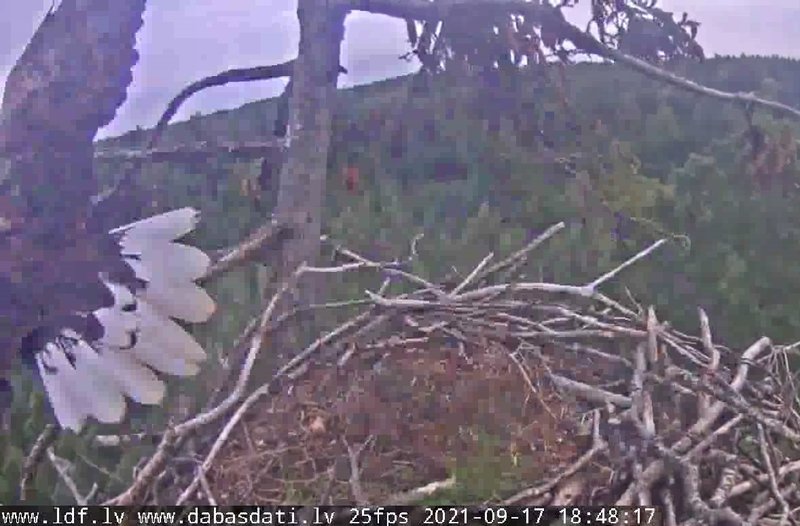 23:29 flight calls of cranes flying over.


this is unusual (or is it?). cranes favour daytime. they are big and heavy birds and need sunny days for migration. they usually fly in the afternoons when thermals have developed and they can take advantage of the lift of warm air.
Top

the night was very windy and there was too much noise to find any sounds or voices which were not especially loud. i found the above crane's calls by accident.

6:30 a pygmy owl was singing far. the voice was strange in a way. it seemed to come from behind a corner and the bottom of a barrel or through some strange filter.
6:31 a normal, loud call of a pygmy owl. blackbirds were talking...
6:32 a loud call again.
6:33 again a call near. a blackbird sang a funny subsong.

6:36 again a pygmy owl called nearby.