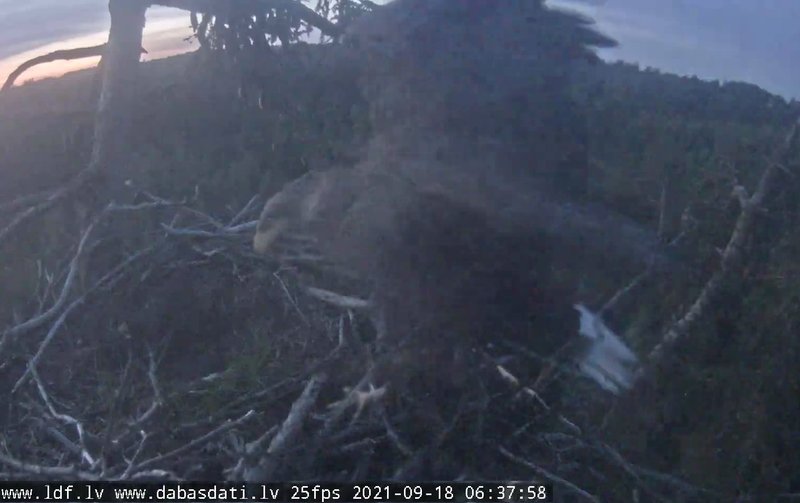 a pygmy owl called. for a while the eagle looked at the east where the day was dawning.
6:38 some nest work. the tail looked clean. 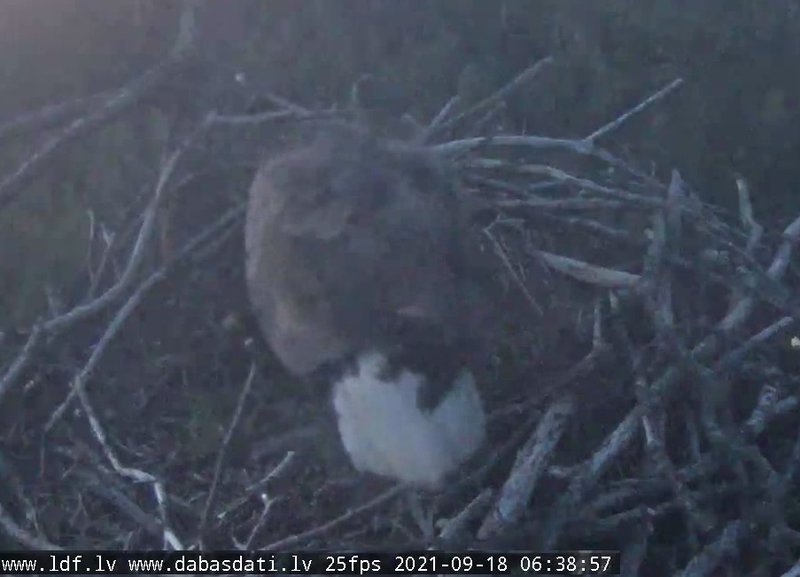 then looking around at the forest... 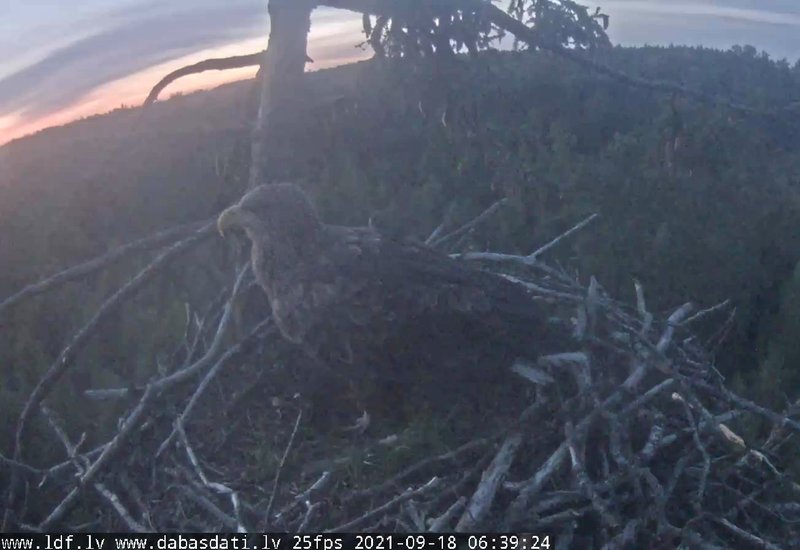 6:40 the eagle lifted the second new stick to a new place.
it's funny how both Mr L and the raven yesterday seemed to know that those two sticks brought by the strange young eagle were something extra on the nest. 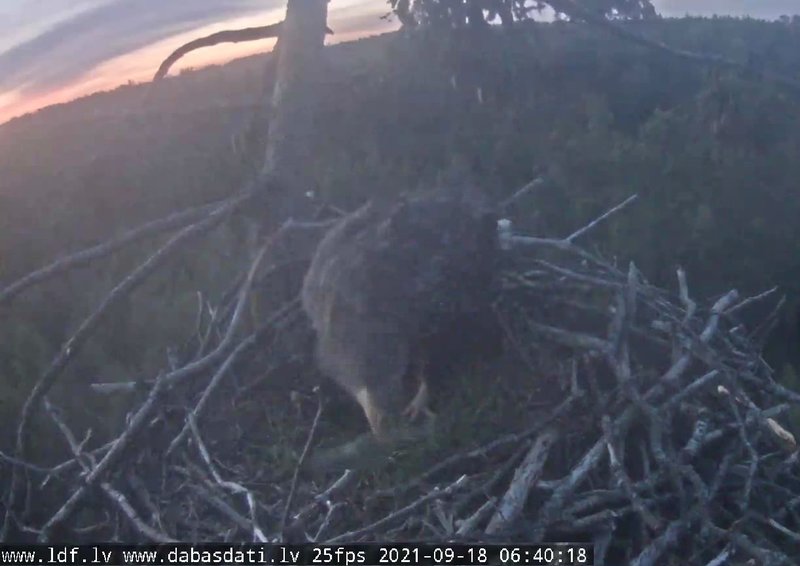 the eagle walked to the left rim of the nest and was looking around.... 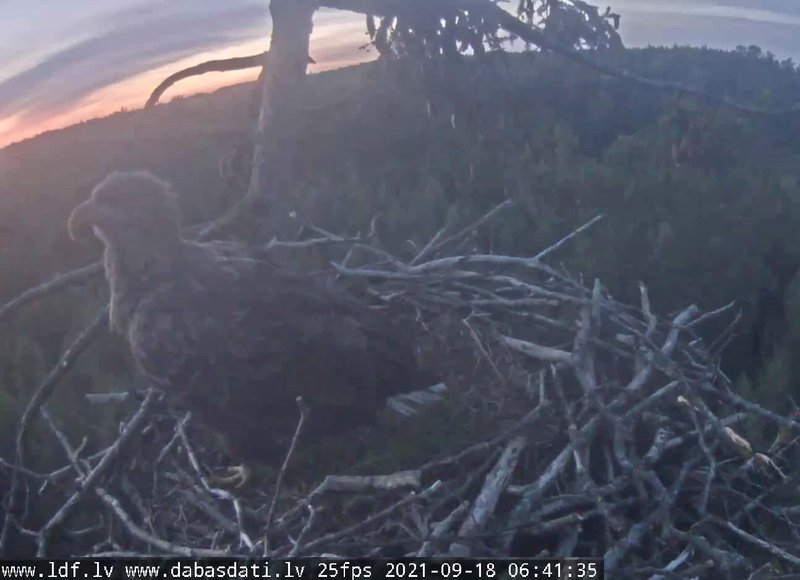 the eagle stood on the rim and was looking around.... the eastern sky became redder and redder.
6:47 the eagle flew away and showed his tail reasonably well. it was Mr L. 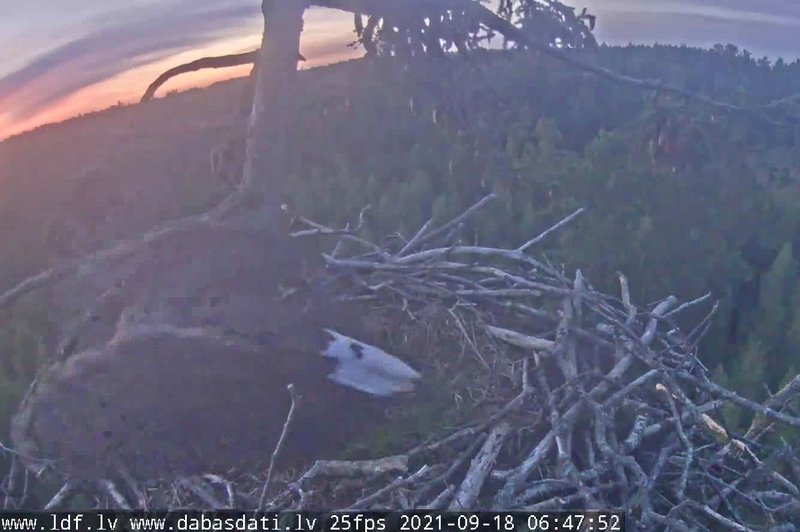 7:00 a bird voice which was similar to the voice which Sonchik heard a few days ago. Sonchik suspected that the voice belonged to a hawk but i wasn't sure. now i suspect that this was a hawk but again i'm not sure. Sonchik was probably right on the first time. (although the called seemed to have lower pitch than this

a second later another bird flew after. that had to be a sparrowhawk. 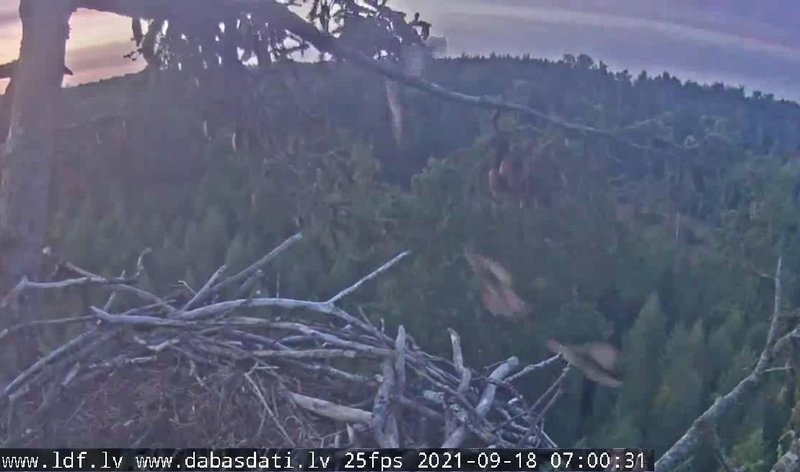 two birds flew away from the top. then one more.
jays shrieked and more calls of the hawk.
jays returned and there was a third bird, too, but i could not see the sparrowhawk properly.

indeed there was a flash of two or three wing feathers in the top left corner. and some more birds flying around. i made a longer video which hopefully contains everything. to be on the safe side this overlaps with the next video, i.e. ends after the next begins. 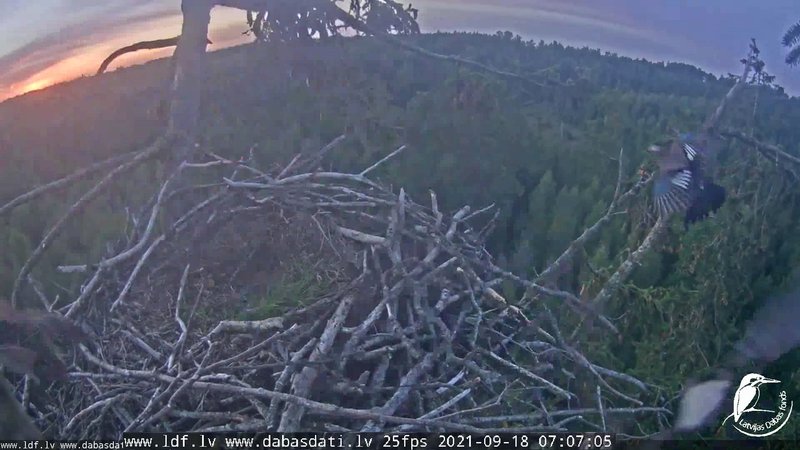 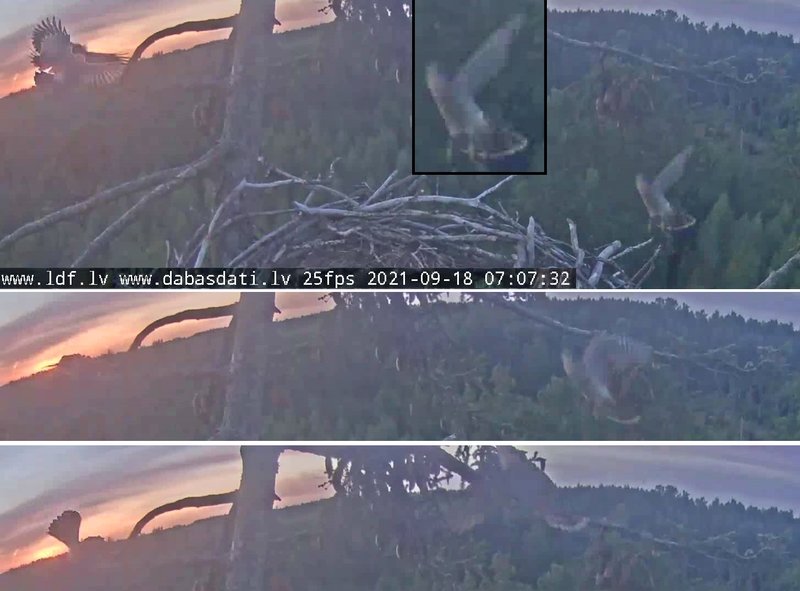 jays flew around our tree and the spruces on the right
7:08 the hawk flew to out top. then to the top branch.

10:11 more flight calls of cranes. this time they were closer but i couldn't see them.

10:28 an eagle landed. a missing feather on the left wing. 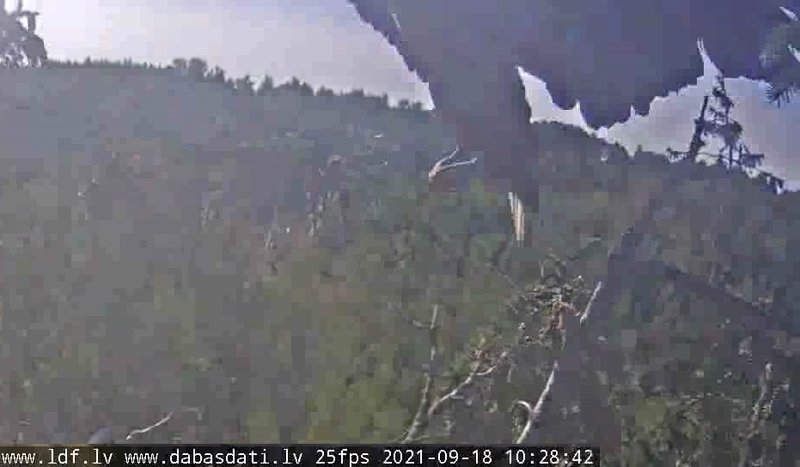 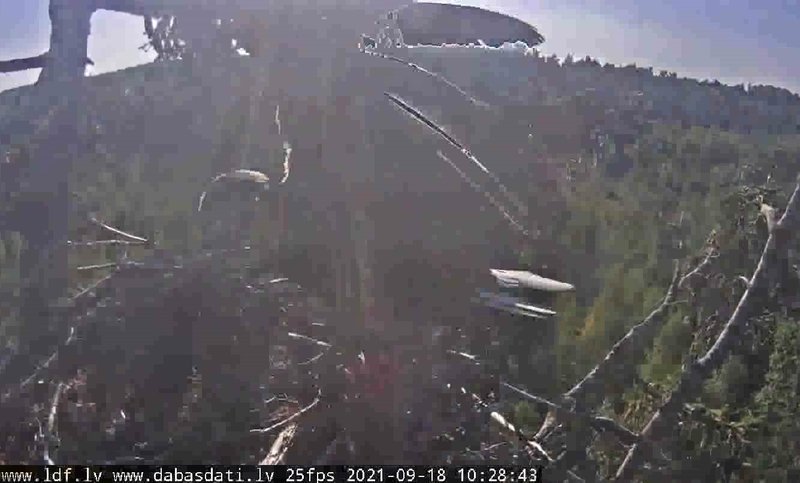 another to the right branch. both came home. 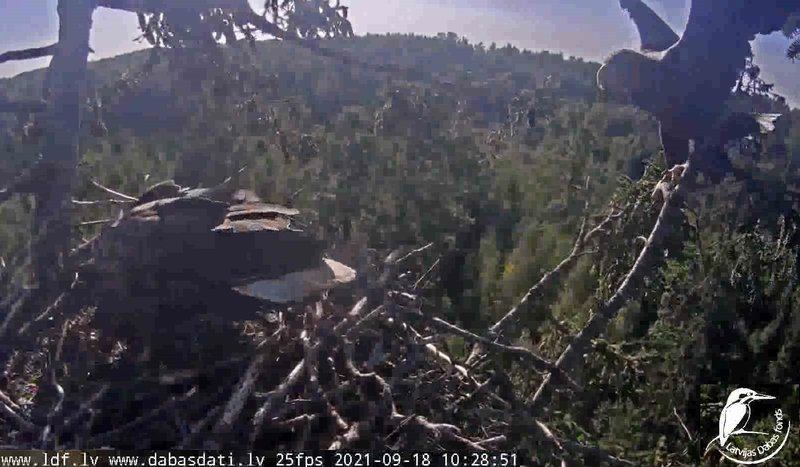 (but i could not see their tails yet)
Top 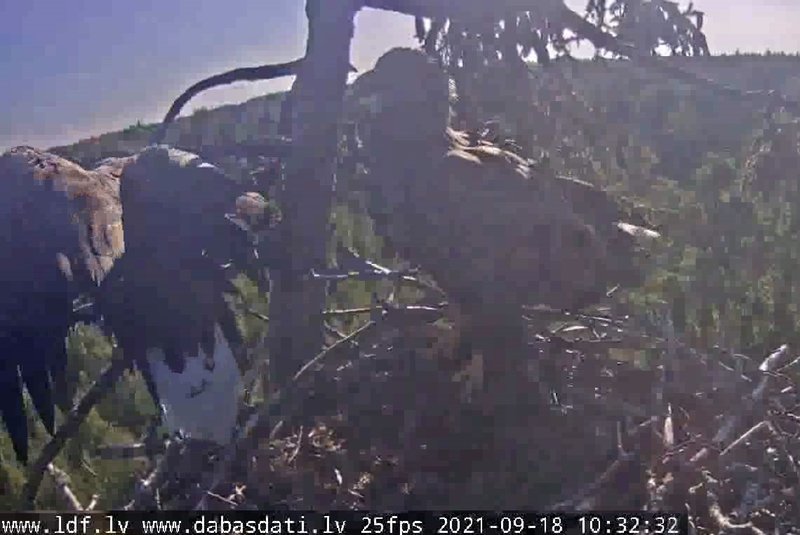 and back to the nest.
both worked a little. then they just looked around... 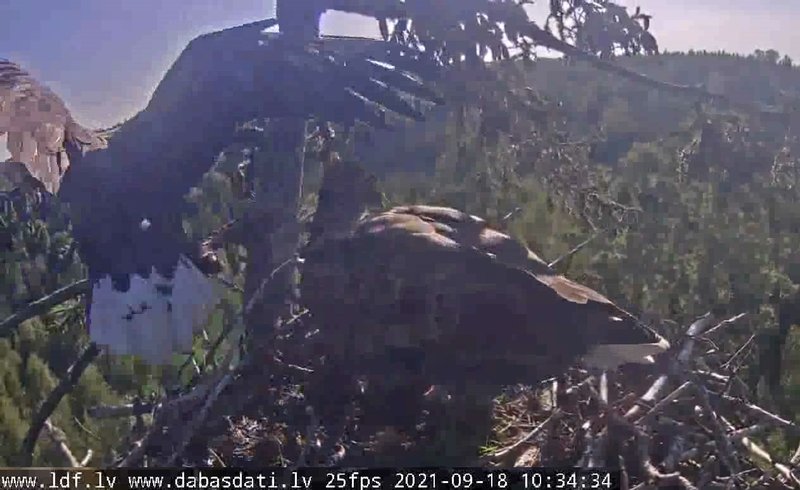 he began to preen. he has two feathers with rather big black spots on the tips on both edges of the tail, in the outer corners of the tail. they look more pronounced than in the spring. maybe the feathers are new. 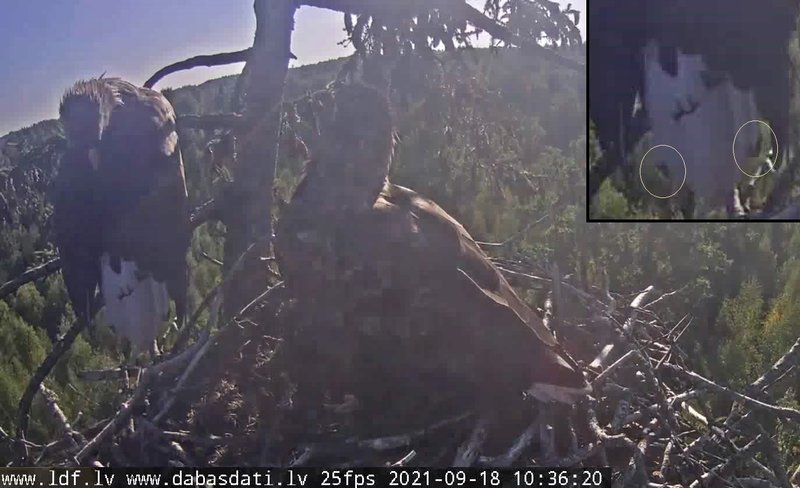 
the light is bad.

10:49 Mr L flew out.
the light was almost as bad as it can get. this is the problem: if two bad pictures are combined is the result any better than the single pictures? 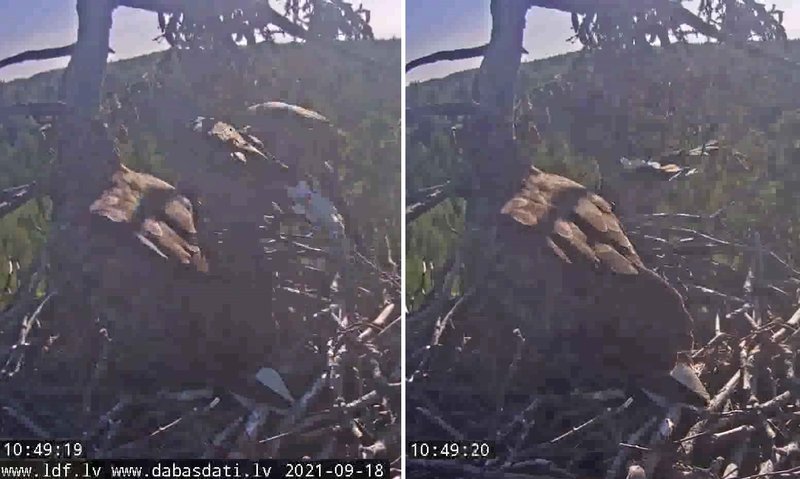 he flew to the direction of the Fish Market on the left.

10:55 Milda flew out. her tail is clean and the mark is clear and looks like circumflex mark.. 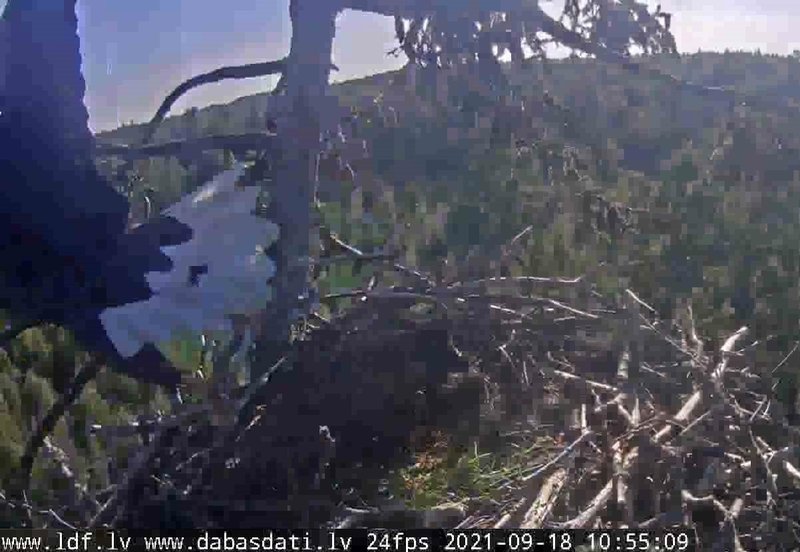 So good to go back to normality

the poor lawn is quite flat now after Milda sat on it. 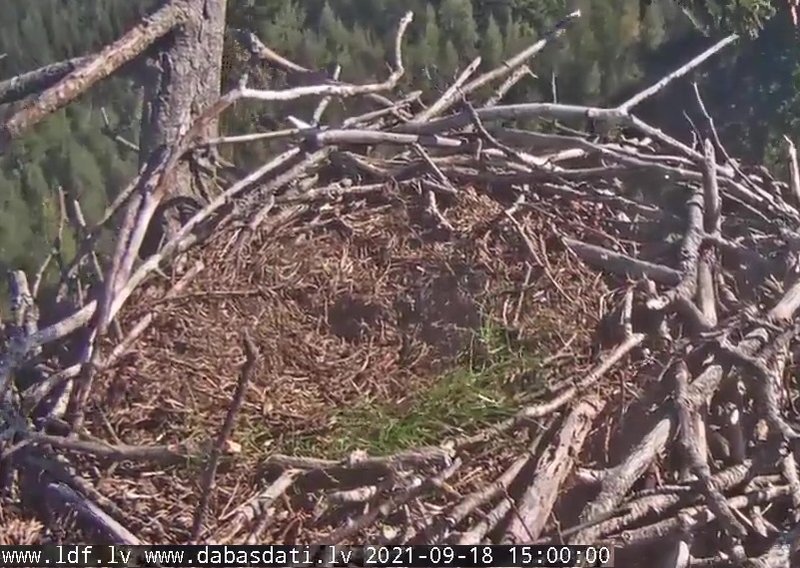 Was it really Mr. L in the early morning? The black bit on the tail looked too big, I think, and the line of the upper dark feathers of the tail straighter than at Mr L's tail? 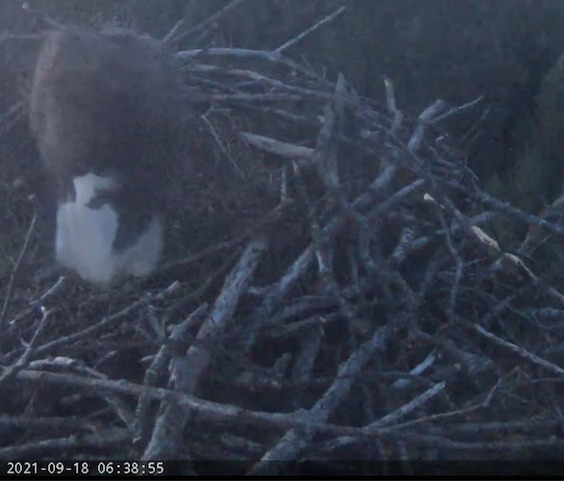 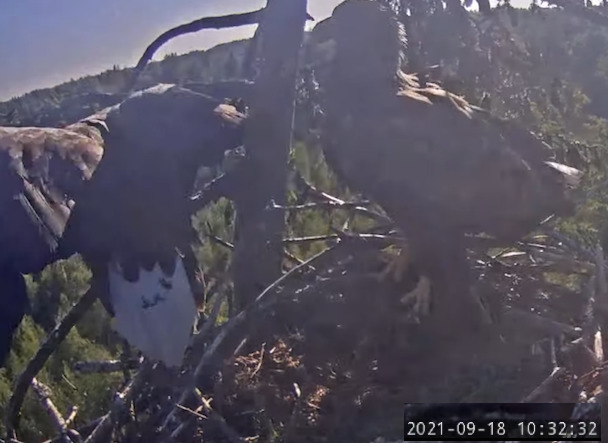 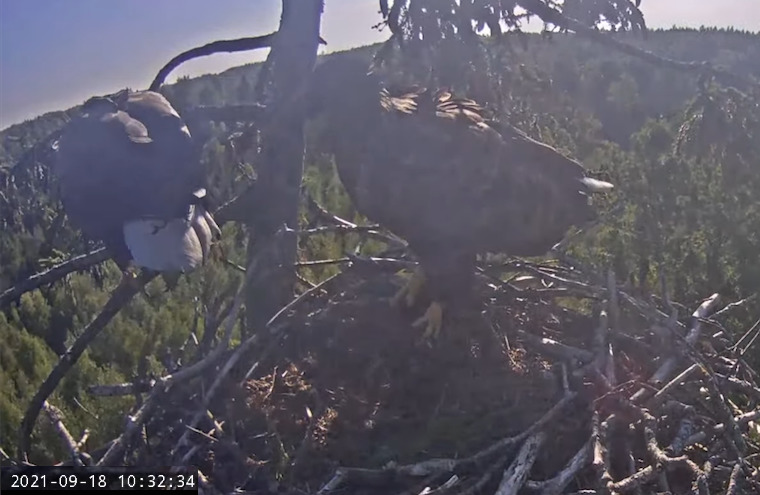 Also, the eagle in the morning seemed to have rather dark eyes? Of course the light was bad, but I'm not sure it was just the bad light. On the whole it seemed not quite familiar.
Top

indeed the light in the early morning was very bad. after all it was almost half an hour before sunrise. so i can't anything absolutely certain in any direction... and i don't think that anyone can either.

any way, i think that the eagle behaved like Mr L and the tail (as much as we could see of it) didn't disagree with his tail, at least not very much. the appearance of his tail is not as constant as Milda's. it varies from time to time depending on the order in which the feathers are.

the tail of the subadult yesterday was much too dirty compared to the tail which the eagle in the early morning had. i don't believe that it was he. so if this eagle in the morning wasn't he or Mr L it would have been a third unknown eagle.

i have many times explained why i don't like to assume more eagles than necessary... so therefore i believe that the eagle in the morning was most probably Mr L. but of course everyone is free to think what they like about him.
Top