beatiful sunrise at about 7:20

bye
AlteEule
There is always a hidden smile ...
Top

Who knows what is there for all of us around the world? Heavy rains? storms? cold weather?
Let's pray for a mild season after all the weather events of 2021.

Liz has uploaded new clips on YT, thank you so much! And this brings up the question - somebody else has asked about this before, sorry, can't find it right now - : since Liz stated on YT: "The behavior of the two looks promising."

, yes, I think, we all agree - sooner or later we will need a name for Mr L. I saw that there were votings for proposed names in the past (regarding several eagle species), but I don't know who initiates such a procedure. All I know is that it should be a Latvian name. My favorite would be Ludis ("famous fighter/warrior"), but maybe you prefer something with "M" in order to represent both eagles as the M-couple at Durbe ...
Top

the Latvian forum members decide the name. if they make a vote all members can participate. i haven't noticed that they have talked about giving Mr L a proper name yet.
i only hope that they would give him a name soon and that the name will be short and simple, with no special characters.

9:50:05 a jay flew to the left rim of the nest.
9:50:10 another jay flew to the top.
the jay knocked and stuffed something on the nest. maybe he/she brought an acorn or something like that in his/her cheek pouch and hid it in the nest. then he/she jumped to the left branch and wiped his/her beak. then he/she flew to the top.
9:51 one of the jays jumped to the upper branch on the right and then to the poop branch. then the jay flew by the camera and probably landed next to it, but i'm not sure.
9:52:15 a jay flew by from the spruce on the right.

9:54:13 a jay jumped from the top to the poop branch and then to the right branch and down where he/she called and then jumped back up. then the jay flew to the right
9:54:46 (after a few seconds) two jays flew on the right to the spruces there and 4 s later aj jay fluttered down from somewhere above the camera.
then the jay jumped boing-boing-boing to the top branch, called and flew up, apparently to the top.
9:55:14 a jay flew from the top (?) towards the Sisters. 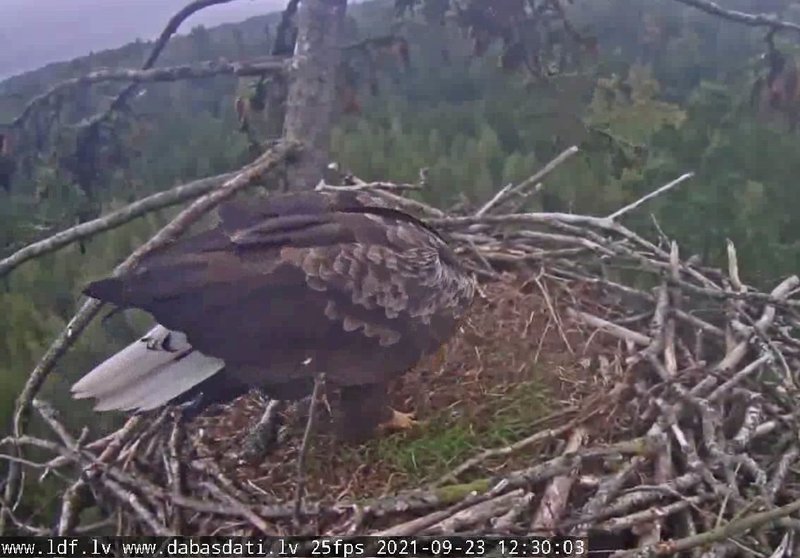 12:31 a jay flew somewhere near, perhaps to the top, and started scolding Mr L. 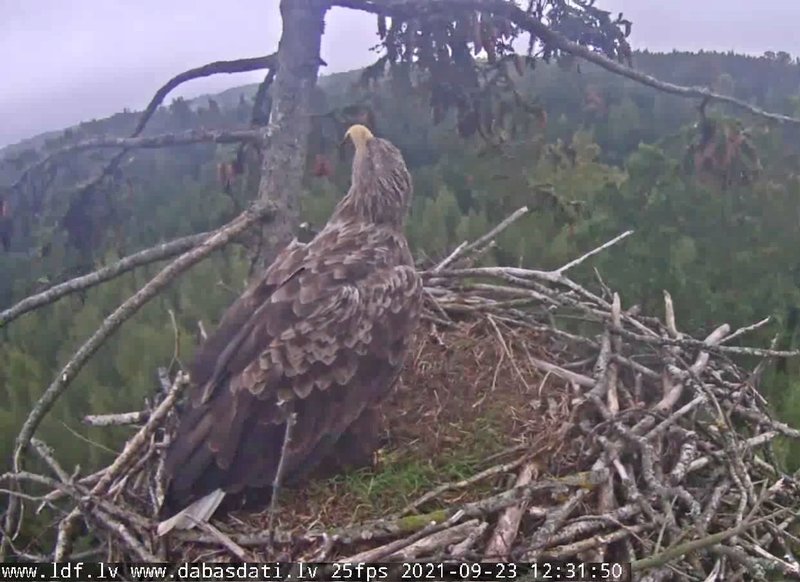 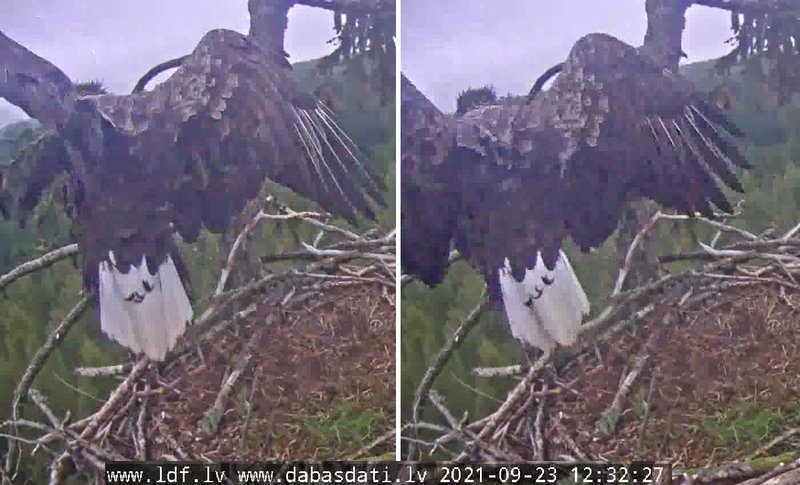 the jay jumped to the poop branch and called more. 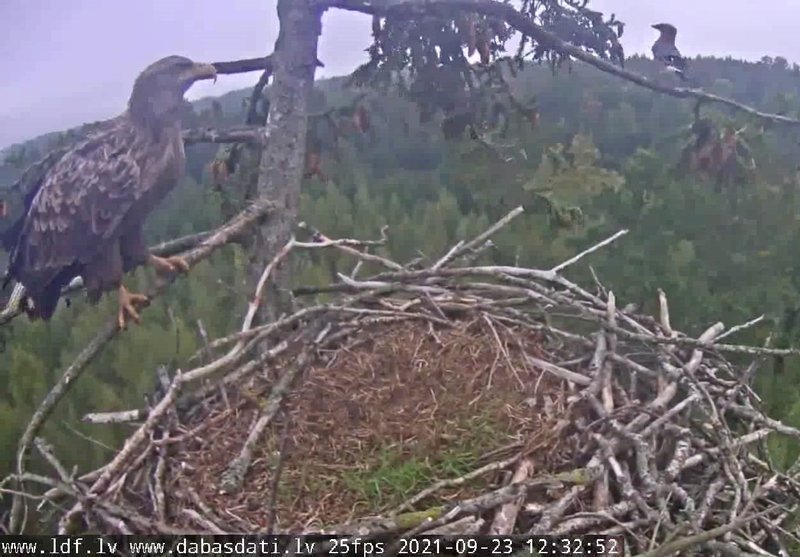 the jay flew away. 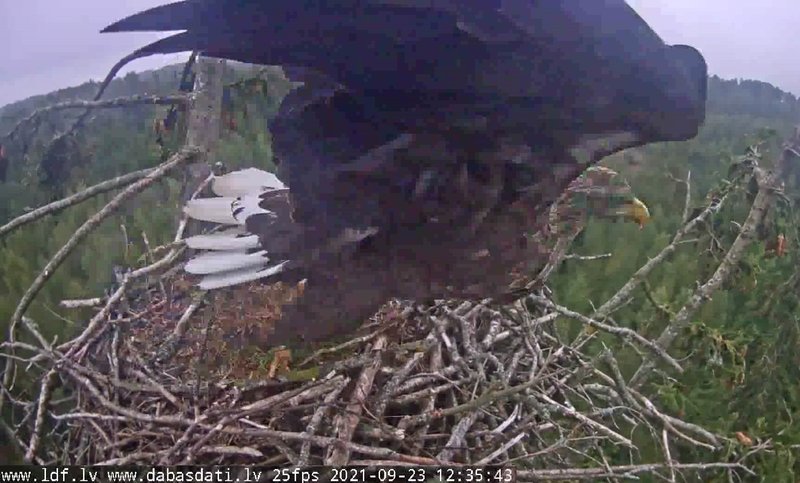 this is the whole visit. 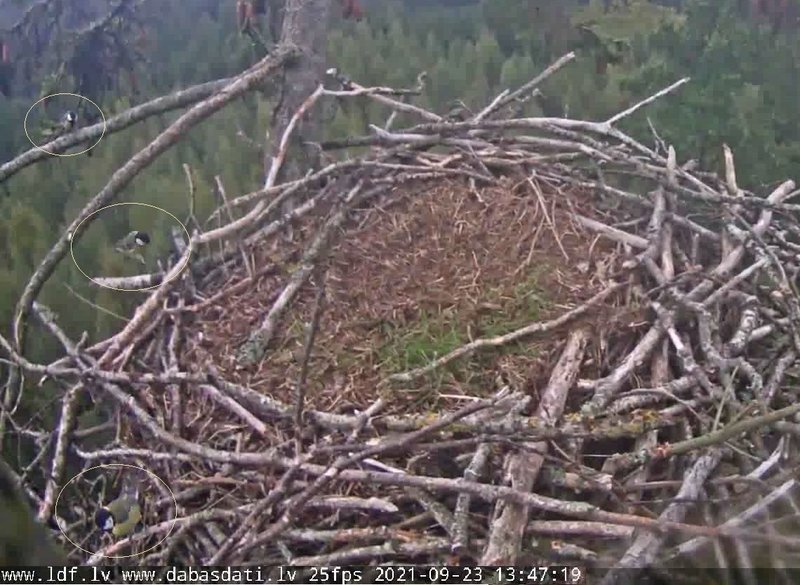 then on the nest. a nuthatch was in the recording studio and shouted into the microphone and banged it.

13:47 three great tits on the left. when they left two nuthatches on the left.
13:48:02 a siskin (or a great tit??) flashed by the camera.
- this was probably the same little bird who came again a little later. the nuthatches are inside the blue ellipses. 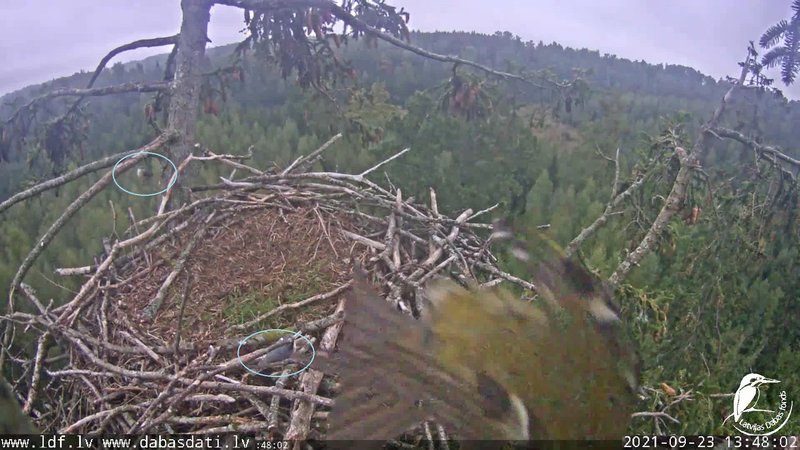 13:54 a little greenish grey bird with two bright (yellow) stripes on the wing. somehow i got the feeling of a goldcrest but it could have also been a siskin.
the siskin is probably more likely. a goldcrest should have a white ring around the eye and white tips on wing feathers. this is probably the same bird who flashed by the camera so that i got only one frame of it on "tape". the flight was so fast that the bird had to be very small. well, siskins are small, too, but gold crests are smaller. i can't say which this is and who the previous bird was or were they the same bird. it's possible.
Top he flew away towards the Fish Market.


mega2 reported this in the YT chat.

it was raining all afternoon and evening and the wind was rather hard.
the rain continued till about 11 pm.

at about 20 min past 4 it began to rain hard for about 20 min.
after that there was some rain but not so hard.
in the morning it became too windy to find any owl's calls. perhaps they were not even in the mood for singing.
Top

8:06 a jay visited and talked with different voices, but no shrieking this time.

then once more back to the top branches.
10:15 the jay flew away to the spruce on the right.

17:28:59 a jay buzzed very near.
17:29 a jay started calling in the forest very nervously. i think this was another jay.
17:30 a jay visited the top branch and cried a lot. he/she seemed to be very upset. i couldn't see or hear anything that might have upset him/her.

18:11 a jay flew in. then a blackbird flew down from the top and came up to the nest, too.
18:12 another jay flew to the top branch.
the first jay had an acorn and started to hide it.


we are going to have Little Sisters growing on the nest next spring, a little forest.