These chicks don't seem to hurry with hunting themselves, do they? They have it comfortable at the lunch and dinner table as long as the parents provide them with food?

@ ame
When the chicks learn to hunt themselves - will they still come to the nest to eat their prey? Or is it then they leave the nest?
Top

Looks like Pukite feels good being alone at home, in silence and calm...

rearranging the sticks and planing his own house in future...

lianaliesma wrote:Looks like Pukite feels good being alone at home, in silence and calm...

rearranging the sticks and planing his own house in future... 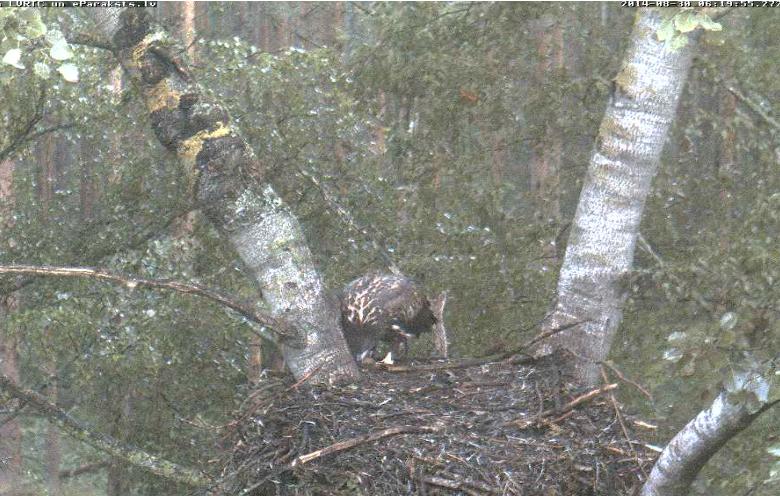 Makonite, perhaps. She jumped on her favorite branch and later on a branch higher. 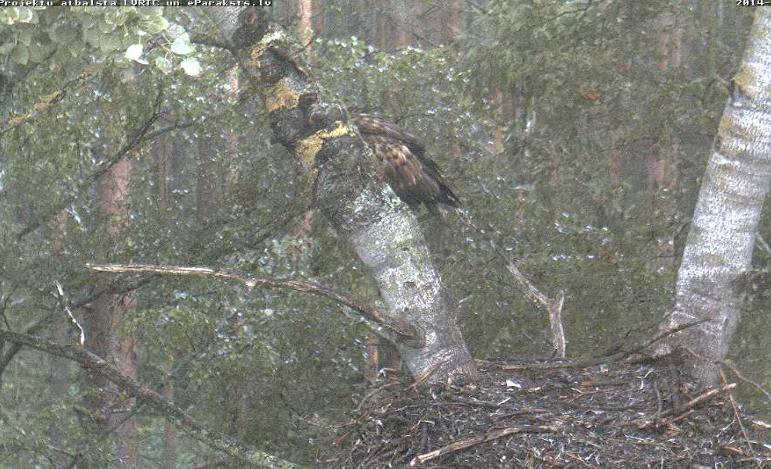 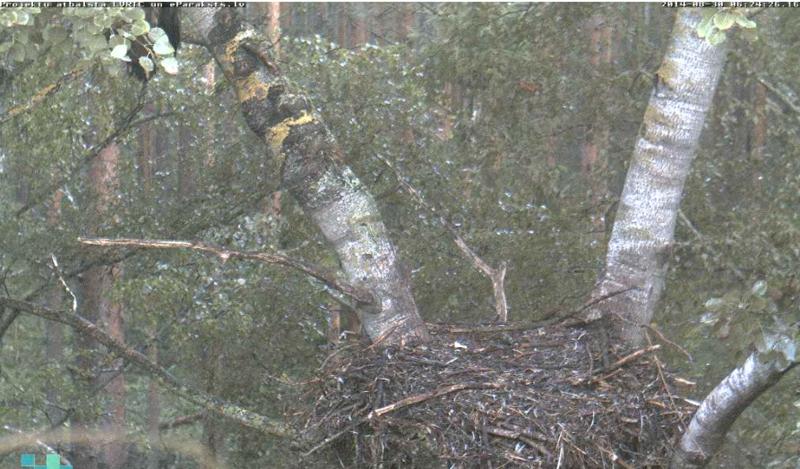 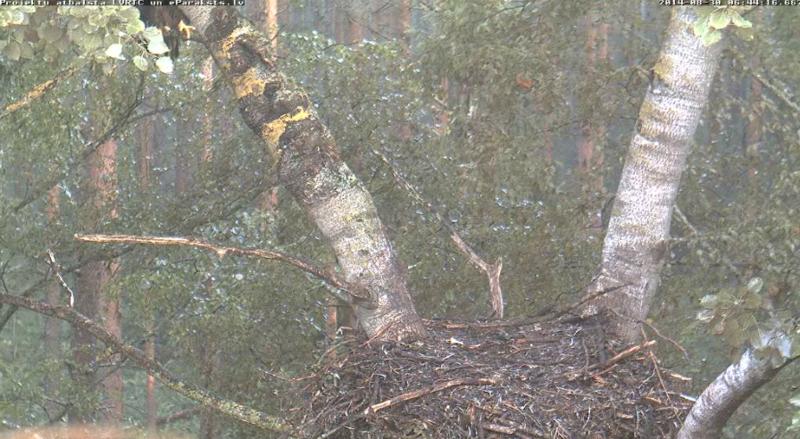 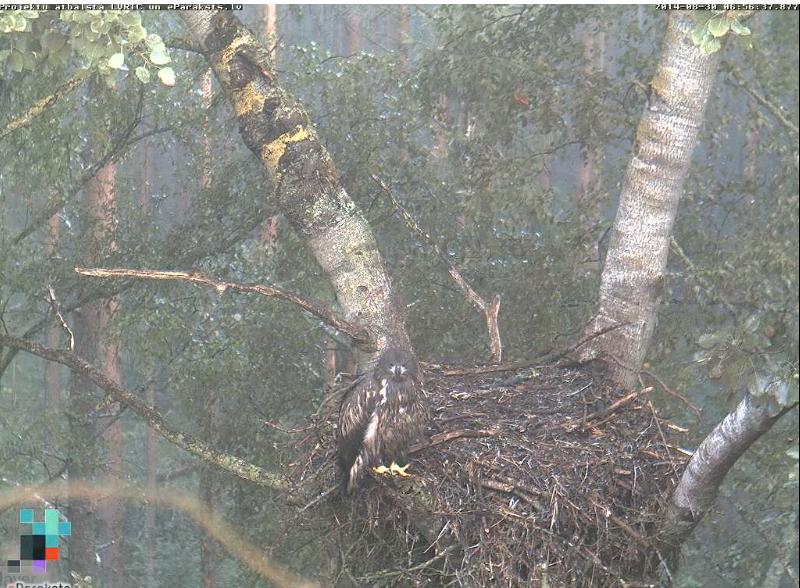 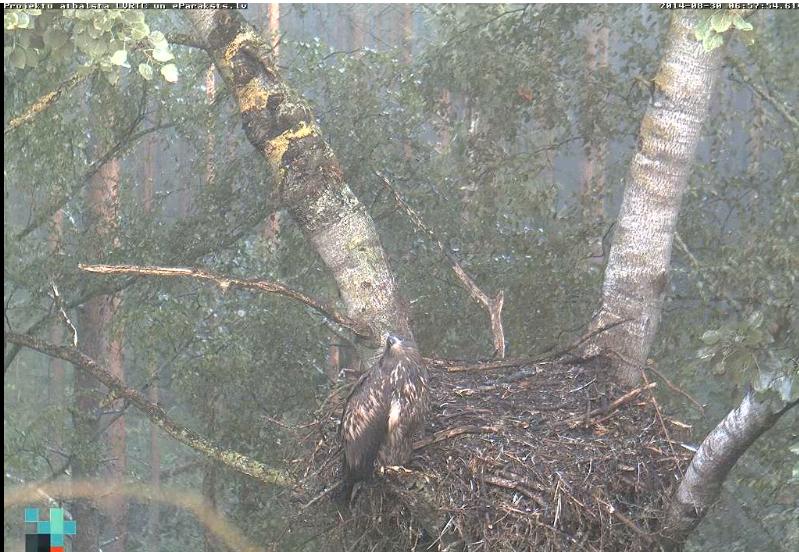 an eaglet came home. Pukite perhaps.
He is very fluffed. Maybe it is cold and damp

it is foggy. Pukite calls, he is hungry?
Top 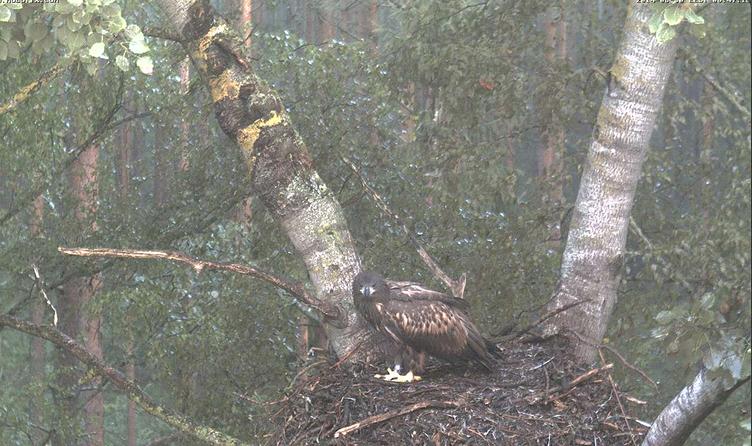 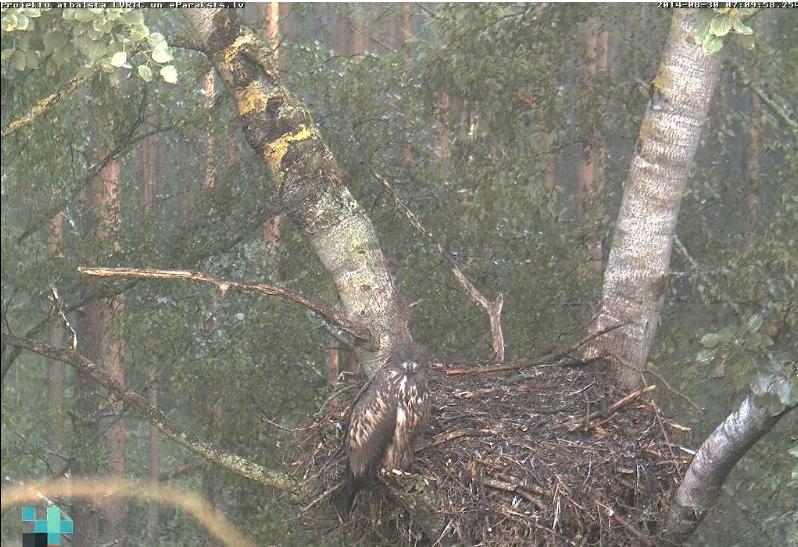 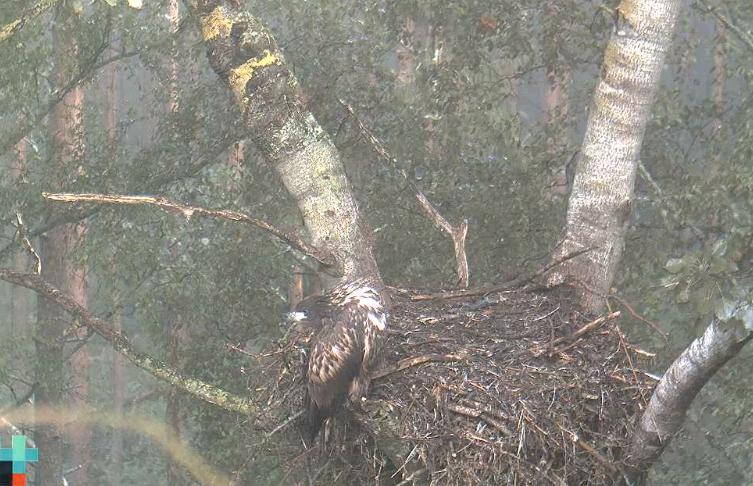 there must be something interesting to see
8:13 he flew away
Top

the camera is not working. it has been cutting this morning and also in past few days. i wonder what it is...?

Owlie wrote:These chicks don't seem to hurry with hunting themselves, do they? They have it comfortable at the lunch and dinner table as long as the parents provide them with food?

@ ame
When the chicks learn to hunt themselves - will they still come to the nest to eat their prey? Or is it then they leave the nest?

unfortunately we know nothing about how the hunting education of the eaglets is proceeding. the only detail we have seen was the delivery of the live bird to the nest. at that time we saw how the eaglet plucked and killed the bird in a way which to me showed that it probably wasn't the first time for it.

i don't know how eagles learn to hunt but i have some knowledge how kittens learn and how cat mothers teach their kittens in this skill. learning to hunt might be something similar with birds of prey: they either know instinctively what to do or their learn by watching the parent hunting or it may be a mixture of both.
- one of the kittens we once had learned hunting just by seeing the end product of the hunt: our older cat (not the kitten's mother) brought a mouse in the house. the kitten looked at the mouse as if were given an electric shock, then it ran out and less than 5 min later it returned with a similar mouse.

about bringing the prey to the nest i don't know. someone wrote here a few weeks ago that they'd have no reason to do so and i think this is true. i can't think of any reason why they'd do that. maybe perhaps they would do so if the kill were performed quite near to the nest but i don't think that they'd fly from a greater distance to the nest.

i also think that the eaglets will eat in mom's and dad's dinner table as long as they give them food.

that will end surely latest early next spring when the parents begin to rebuild the nest for the next season. that will be the latest time when they'll be shown that they aren't wanted anymore. the eaglets might still try to return. if i remember right a one-year-old eagle was seen visiting Linda's and Sulev's nest in Saunja in the spring 2013. also in earlier years at their old nest there were some visits by young eagles. they'd sit on a branch by the nest and the parent on the eggs scolded them.

the camera is still not working. i've sent e-mail asking about it.
Top

now even the Pontu camera has stopped working. the last picture was taken at 10:52.

Thanks, ame, for your answer - I liked especially of the kitten part of it!

If I rememeber right Makonitē nad Pukitē are three weeks younger than the Danish eaglets - who 'left' the nest practically when the cam was turned off - and it was nearly three weeks ago. So we maybe see the Latvian eaglets some more days on the nest - maybe depending on how long the camera is online.

I suppose WTE's have not been equipped with transmitters. What ways there are to study their first territory behaviour after the birth year? Except the ring observations.
Top

I know of only one page in German
http://www.brodowski-fotografie.de/beob ... zucht.html
it is German- google translater is good enough, i hope

Owlie wrote:
I suppose WTE's have not been equipped with transmitters. What ways there are to study their first territory behaviour after the birth year? Except the ring observations.

There have, on the Migration map - http://birdmap.5dvision.ee/index.php?lang=en# - you find WtE "Meelis". The film how Urmas and Joosep fit on of the WtE chicks with a transmitter. viewtopic.php?p=151520#p151520
Previously both eagles were on the map, at the moment it is only one.
“One can measure the greatness and the moral progress of a nation by looking at how it treats its animals” (Mahatma Gandhi)
"You can judge a man's true character by the way he treats his fellow animals" (Paul McCartney)

you know why the camera is not working? I miss the screaming

i don't know about the camera, Liz. i have sent questions about it in the morning to the people who are in charge of it and who should know what to do. it's weekend and maybe these people don't read their mail. they are having a holiday maybe.

Owlie wrote:I suppose WTE's have not been equipped with transmitters. What ways there are to study their first territory behaviour after the birth year? Except the ring observations.

i have now Pontu clips from yesterday evening at 18:20. then Lubana brought a HUGE fish. she flew to the nest closely pursued by one eaglet who i think was Pukite. it grabbed the fish immediately when Lubana landed and took off at the same instant. well done Pukite! it has learned so well how to do this trick

the second eaglet followed in their wake and flushed Lubana to the left branch. to me this eaglet seemed to be Makonite. she was screaming to her mother who soon took off from the branch. then Makonite was making calls in disbelief in the nest alone. i'm sure she had seen the big fish which her mother was carrying to the nest but now there was no sign of it in the nest. she could not understand what had gone wrong...

here's a slow-motion video of the delivery in 1/3 speed (the sound may be funny). i laughed out loud when i saw how Pukite did the trick and how baffled Makonite was afterwards!

here's the video in normal speed.

we are a bit unsure about the names of the eaglets: what should we really call them. can you help us? i think that when Latvian school children gave the names they assumed that the smaller was a girl and it was given the feminine version of the Flower. likewise the bigger eaglet was given the name Cloud as a masculine version. now it has become obvious that the bigger is a girl and the smaller is a boy. What would the names be in proper sexes: Pukite as masculine and Makonite as feminine? we have just used these names without knowing really what they should be. -surely there can be a masculine Flower and feminine Cloud, can there?

in the Botanical Garden of the University of Turku a giant agave plant has started to bloom at the age of about 50 years. these plants live in nature in the Mediterranean countries. after the blooming is over the plant will die.
i'm sure this plant is masculine (though there are both feminine pistils and masculine stamens in the same plant)