Welcome to follow the second nest camera in Latvia!

The live camera stream can be seen through the following channels:

On the Youtube Channel of the Latvian Fund for Nature:
https://www.youtube.com/channel/UCIcQwg ... hMBclDJENw
There are several transmissions. Choose the interesting camera with a red "Now Playing"-text on it.

Direct live link in Youtube (Can be changed. If not working, use the channel menu - address above) https://www.youtube.com/watch?v=zJsBghpLup8

Through the Natural Data Link (all live in one window)
https://dabasdati.lv/en/cameras2018

So far we don't know much anything about this camera. more information will be updated here as soon as we learn more.

At the publication of the camera there was already an egg in the nest.

Nest information from DD (GT'ed so not quite understandable yet; sorry)
https://forums.dabasdati.lv/viewtopic.p ... 34#p174734

The nest is located in the northern part of Kurzeme in the nesting area known since 2013. The first nest was located in the old, curved and sunken apse left by the cut, on this site the eagles were successfully nursed for two years. In October 2014, the nest fell and the birds moved about 80 meters further by building a nest at the top of the old pine tree. In the two years that the socket was populated, the pups were not eliminated more than once, and in 2017 the eagles built a new socket about 300 meters further. This time the birds chose the old parts, building the nest in one of the tops of the horse. Already in the first year of nesting in this area was successful, at the end of May two young birds were found there.

The online camera system was installed at this socket at the beginning of 2018, at night from 21st January to 22nd January. Both sea eagles started to visit the nest only in March, the first egg socket was released on March 20 at noon. 14.28. The two nesting hosts are unmarked, so the origin of these birds is unknown to us.

Camera systems at this socket were placed by Janis Ķuze, Janis Rudzītis and Janis Kazotnieks. Girts Strazdiņš and Arnis Zacmanis have contributed to its maintenance.
Top

Important events at the nest

Events will be added to this list as times goes on and interesting and important events take place.

22.6. Then younger eaglet Knips fell out of the nest in the morning at 6:40.
Jānis Ķuze went to the nest and took Knips away. Knips was badly famished and was transported the bird rehab centre of Uģis Bergmaņis.
https://www.looduskalender.ee/forum/vie ... 87#p597787

Who is who at the nest

the female was given name Cilla (on the left) and the male Osis (on the right) on 25.3.2018. The tail patterns are quite different so it will be easy to know who is who, if they are kind enough to show their tails. 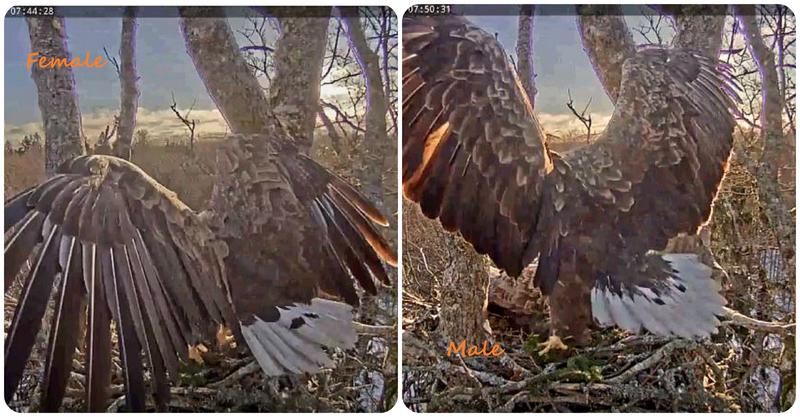 I'm not sure if I understand correctly. Another eagle nest stream

perhaps they are making the other cam public. i'll know when/if i see what it looks like.

The second nest today has an egg

Immediately the camera will be youtube, but now it's night

I often think, I'll see Durbe again. I know, I will not see her again. But I can not forget her. She was *my first eagle*.

this doesn't look same as the camera that Janis showed me last autumn.
he then said that they consider a long time before making a camera public because maintaining one requires deep commitment in maintenance. and of course a lot of confidence in reliability in the technique.

i think we'll need another topic for this camera.

so here we have a topic for the second nest. tomorrow i'll try find some information about this camera.

guest wrote: The second nest today has an egg

Immediately the camera will be youtube, but now it's night

Thanks a lot, guest, for the great information, picture and videos! A new nest with a beautiful couple and a good view!

And there's already an egg!

Marvelous!
It will be interesting to get to know the eagles, their characters and relationship.

As I've read in the dabasdati forum, the egg was laid only today, on March 20th. So all is in an early stage and one can follow all important things at nest from the very beginning. If there is time - too many nests -

Link to the Youtube Livestream: https://www.youtube.com/watch?v=zJsBghpLup8
The cam is now, at night, still working. It's a strong wind out there.

Thank you very much, ame, for the new topic!
Top

So I got it right, a second cam with an egg

Thank you for opening the new topic.

I will prefer to watch our Raimis & Milda 6:09 A changeover! Male comes to the nest.. Female flew away 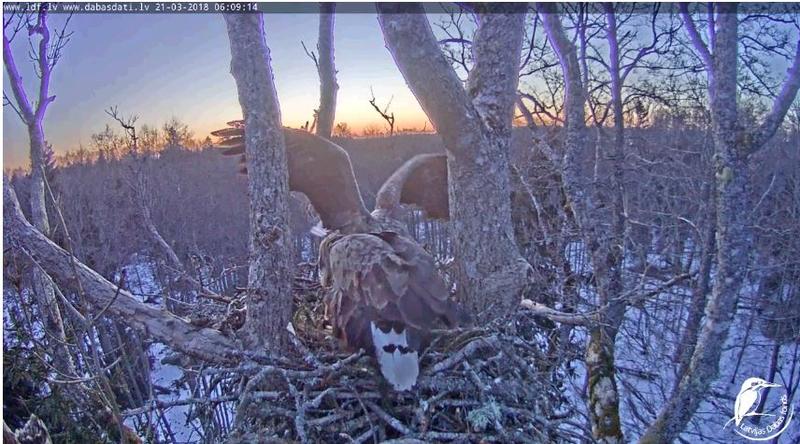 6:20 Male flew away, Female lands at the left on a branch and came into the nest
Top 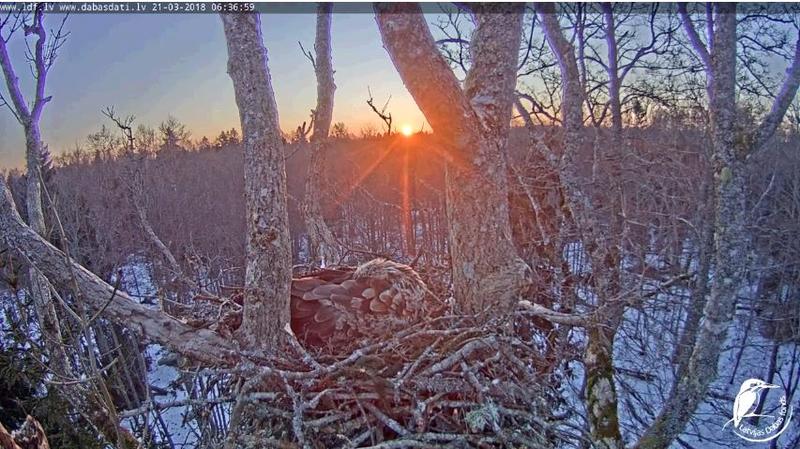 good morning!
it's so beautiful here.

the male has big tail spots that look heart-shaped like Linda's were. 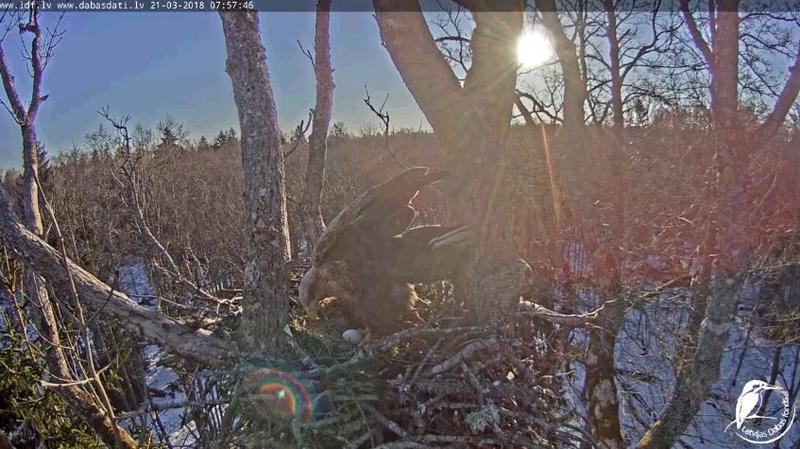