thanks Liz!
12:35 the voices sounded a bit like mallard's voices but not quite. the rhythm of the calls was a bit too slow.

after that probably voices of crows.

maybe also the first voices were crows as well?
all the birds were far and the wind was very loud.

we have a new pointer stick swinging back and forth on the front left.
13:49 the stick stood up.

first i thought that i'd make a gif the resurrection but i really can't...

07:50 Small pieces of blue sky are visible above the trunk. Day is already longer?


it's getting light... the sky is not fully covered by clouds.

i had another look at yesterday's morning videos. the top end of the stick was bobbling behind the minute digits for most of the morning. at 11:44 the top raised above the time stamp and became more visible. -it funny that the stick can stay there so constantly in such delicate balance, stable and yet not stable.

9:10 the sunrise. - this is as close to the winter solstice as we could get with this weather. 10 min later the Sun was visible in the sky map. it had risen high enough. the morning "star" Venus was also in the sky but invisible a) behind the clouds, b) too high in the sky for our camera, and (or) c) because it was too light. in the camera view the Sun was apparently lower than 10 min earlier. a fish eye lens trick. 15:35 the pointer stick slipped out of sight again from the front left edge.


17:28:35 the camera went to sleep.
i wasn't watching all the time but i heard most of the day and most of the day i didn't hear anything special. i heard nuthatches and black woodpeckers at times (but i didn't write down when), and i think i heard some swans' voices as well.

Ame...
This morning I looked at the date and wondered if you are already working on renewing our first page for next year ...

Abigyl, not actually hands-on working on the new season, but i have been thinking about it. brain work.

8:28 a pygmy owl called rather near. about half a minute later calls from far(?) and then calls near!

9:26 jays quarrelled nearby.
9:33 a buzzard called, probably a real because the voice "seemed" to come from the sky from different places. there were also some voices of crows. they were probably keeping the buzzard's company.


i realized that our pointer stick has gone again.

it happened during a gust of wind yesterday afternoon.
https://www.looduskalender.ee/forum/vie ... 80#p772280
Top


it's raining hard something which is partly visible. either big drops of water or big rags of sleet.
Top

the sleet has become more visible and dominant.

07:30 Cam is working and the horizon is already visible 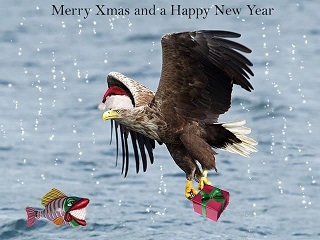