We could enoy the clear pic for such a short time!
Top 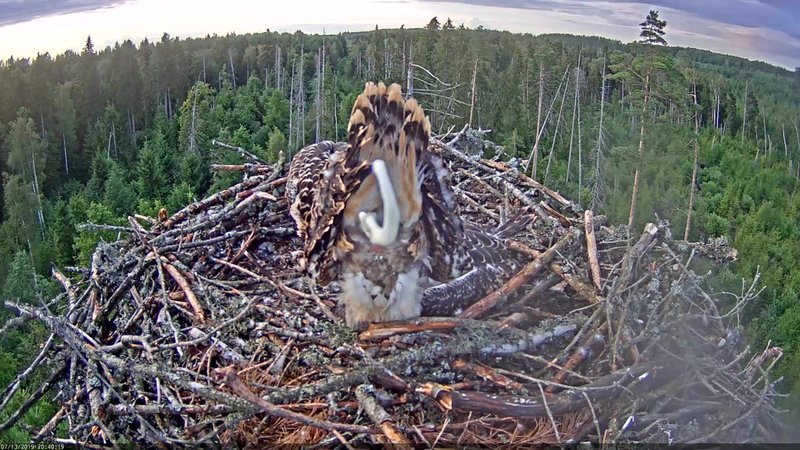 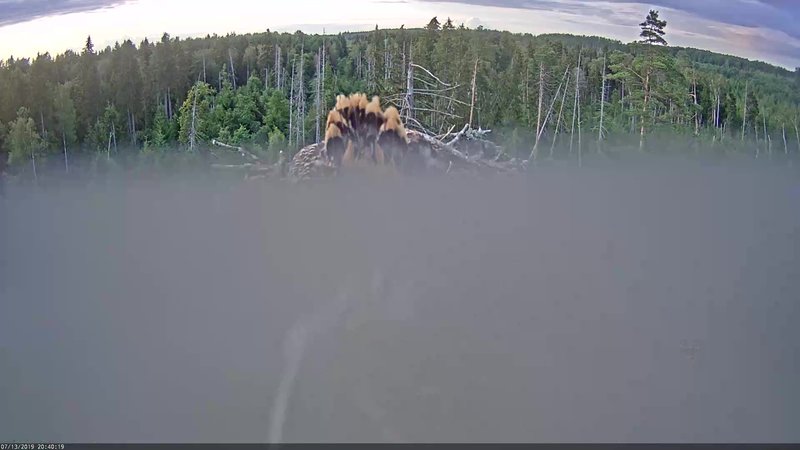 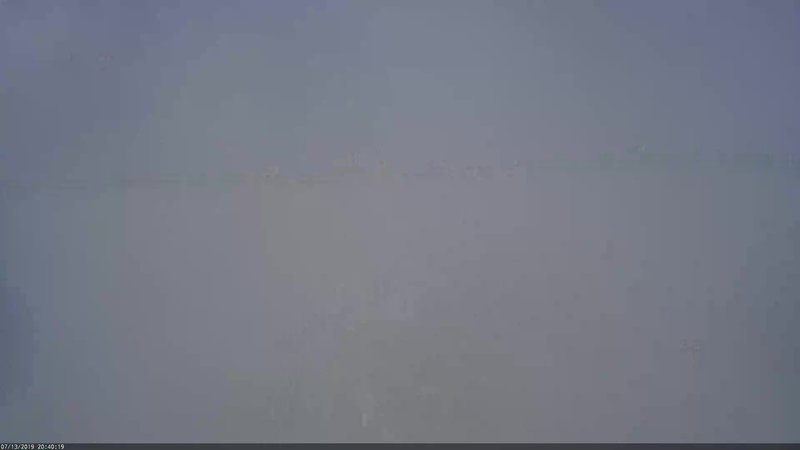 Look, in my opinion today one worked hard

Osprets a bit lazy to show interest, they come one by one ...
Top

Ivo delivered and Iiris took a fish, feeding begins, two chicks are interested. I think the third one is looking at the opposite direction behind Iiris
Top

Thank you, I update it on the first page

Bea and olgapyat, thank you for the videos of Smallie's drawing the curtain on the nestlife.

I watched the videos twice and seems it was intentional as the shot was made right in the middle after careful consideration where and how to stand.

15:41
Iiris arrived with an almost headless but kicking fish and begins to eat by herself. One chick gets fed in a Roman style (lying down), the other two are not interested.
Top 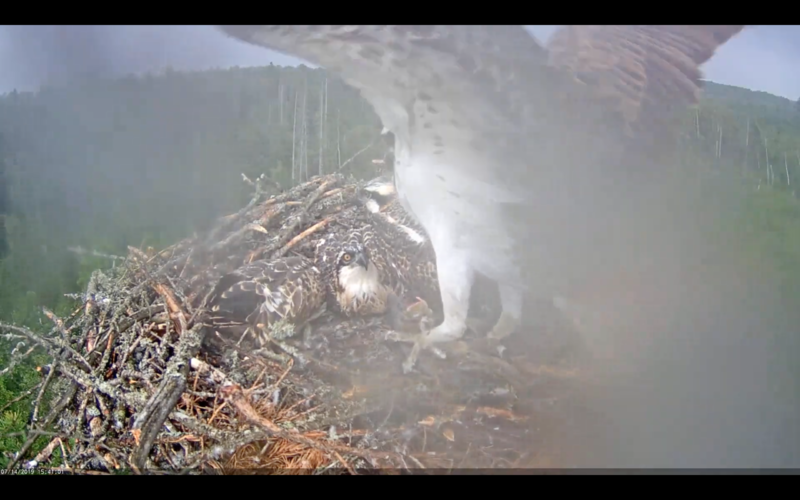 17:16
Fish! I can't see the rings, it must be Iiris, the fish is a smaller one. She stays still and looks at here and there in surroundings ...

Still at 17:28 she stands still and observes surroundings the fish in her claws

Not until 17:32
she dares to begin tearing the fish and the chicks are interested, too.
EDIT: probably two osprets show their interest, Iiris blocks the view.

I hear ravens or other corvids nearby - maybe they were a problem to Iiris with the latest fish delivery, why she waited so long before starting to work on the fish.

18:59
Ivo in with a very big fish with head, Iiris thanks and tries to kill the very much alive prey. Two of the chicks sign up for feeding ...

It is difficult to tell apart the chicks, at this stage the size doesn't necessarily mean age, but gender. If their characters are the same as before, then we could assume, that the most eager ones for feeding would be Oldie and Smallie, and the third one waiting for her/his turn would be Middlie. But also those circumstances can have changed, we never know ... (I do suppose that the one who ever starts a fight is still Smallie

at ab 19:55
It sounds like Iiris would have landed on the cam stand in order to keep a concert

20:03
Ivo in with a headless fish. Iiris takes it over and starts feeding to one chick to begin with.

20:43
Is this a new fish or the old one from 20:03? Feeding of two going on (I was away half an hour). At the end of this fish I see that Iiris gets a good portion for herself

At about 21:00 Iiris leaves the nest
Top

8:46 Ivo brings a fish and drops it on top of one of the chicks

9:03 Iiris is feeding, only 1 chick is interested in the fish
Top

12:44
There had been warning calls and one of the parents is sitting on top of the far bald tree 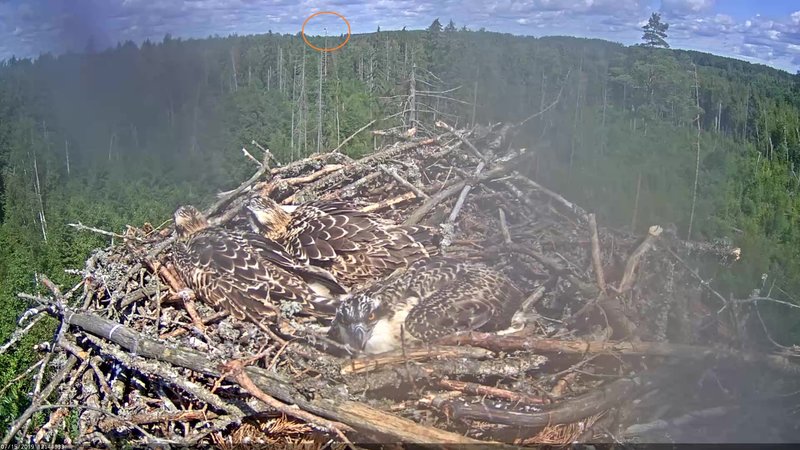 13:18
Two osprets preening, one dozing and Iiris back in the dead tree, also preening 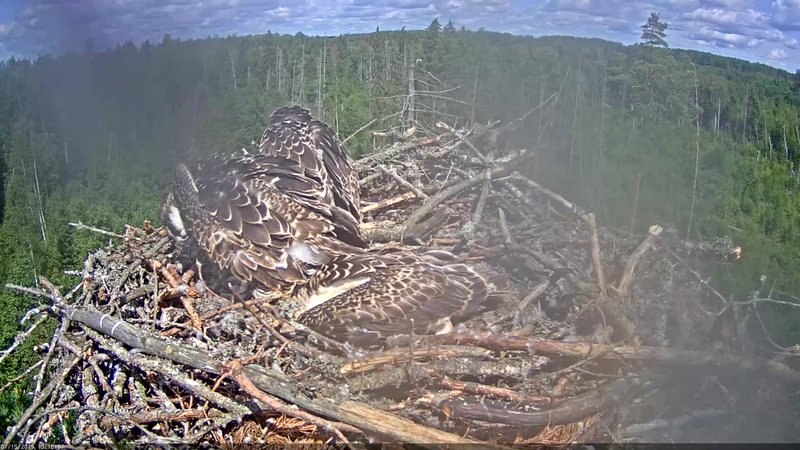 14:01
Feeding, two osprets interested, the third one prefers to chill on the rim 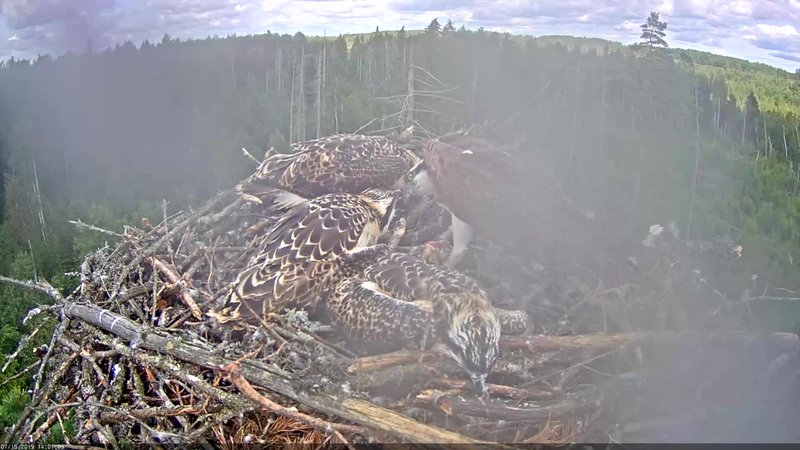 15:29
Human voices and breaking branches, I think ringing will happen right now.
And we will get a better view, too - hopefully

Adult osprey is warning.
Nature does nothing in vain (Aristoteles)
Top

In addition to the better view the cam will not be offline any more! We are eagerly waiting, good luck to the ringer.

One ospret stood up. The ringer is here. Urmas starts cleaning the lens. What a view!
Top