Today Melle spends the night on the branch on the left.

Eaglets spent the last night in the nest together.
Elle came to the nest first. Then she sat on the branch on the right. 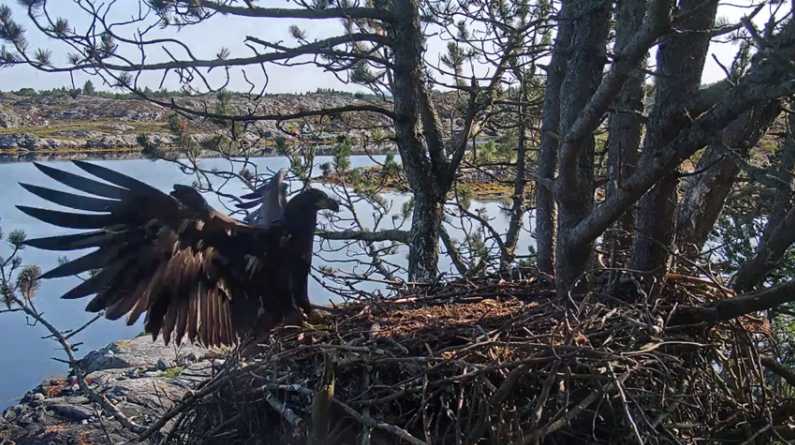 Baroness and Melle were sitting in a nearby tree. 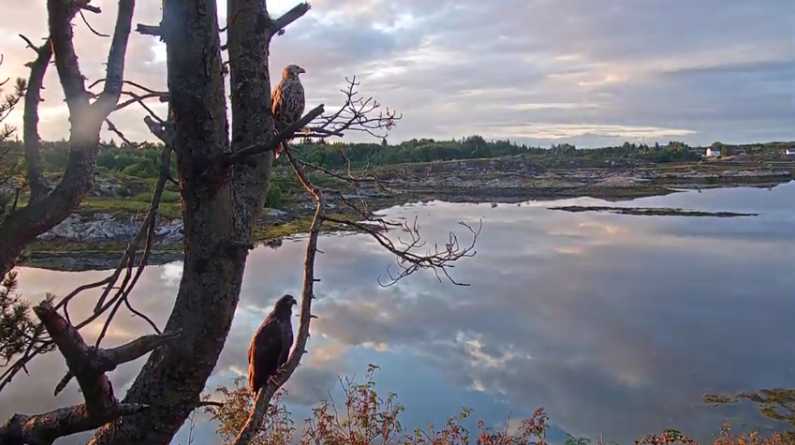 Later, Melle flew to the nest and fell asleep with a stick in her beak 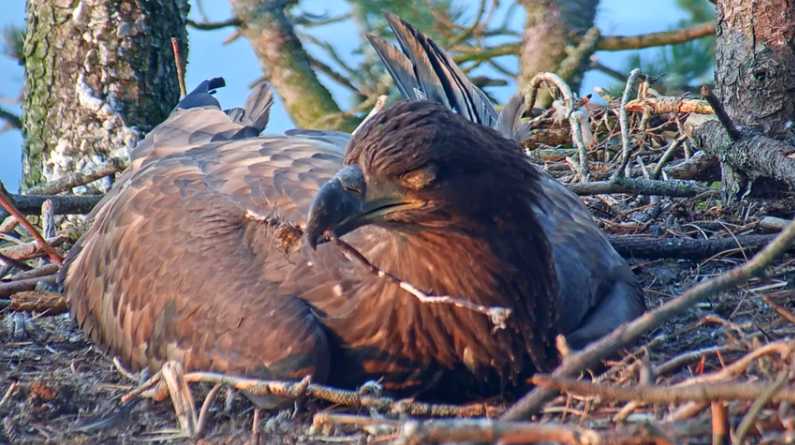 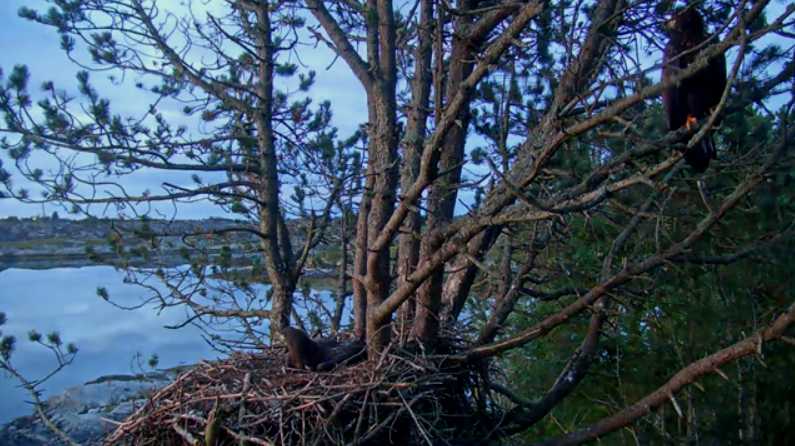 This morning Melle flew away first. 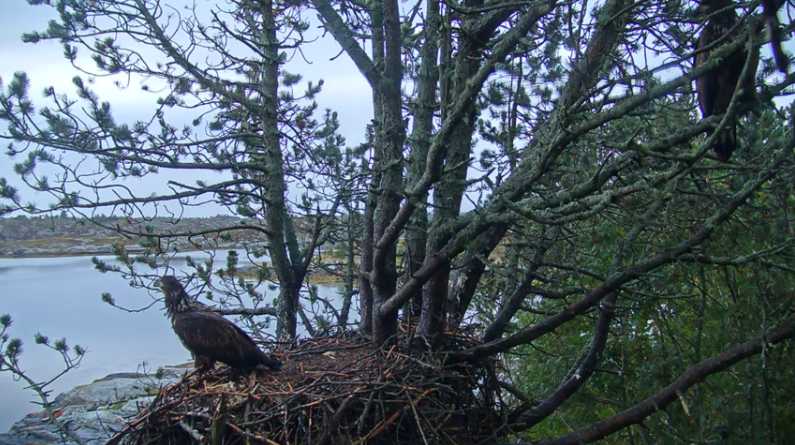 Elle jumped on a thin branch that broke under her. She is the big and heavy eaglet

Melle was resting when Elle arrived and pushed him out of the nest. She is a fierce juvie.

September 15 and 16
Baron and Baroness defend their nest. About two years juvie was chased away by Baroness.


Only this year's fledglings are allowed to stay in the nest. Melle spent the night in the nest.


Melle left the nest in the morning in a strong wind.

A new female white-tailed eagle has joined Baron on the nest today. Baron flies in to the left branch and she flies in after him. Baron will fly to the nest and she follows and they both do some digging. Seems like Baron has accepted this new female. Notice her very dark eyes, she is a younger strong female with no limp, greyish flatter head feathers and different shape beak then Baroness.

Baron goes to the bouncy branch and she will hop up to the branch above the nest - a spot that Baroness rarely perches in. They both spend the night together.

Baroness was last seen on the bouncy branch spending the night on Sept 29th. Baron has been seen a couple times since and both Baron and Baroness vocals were heard on Oct.12th...

When I saw the eagles in the nest yesterday, I thought it was Baron and Baroness. But the female was not limping! The couple looked friendly and spent the night on branches by the nest. 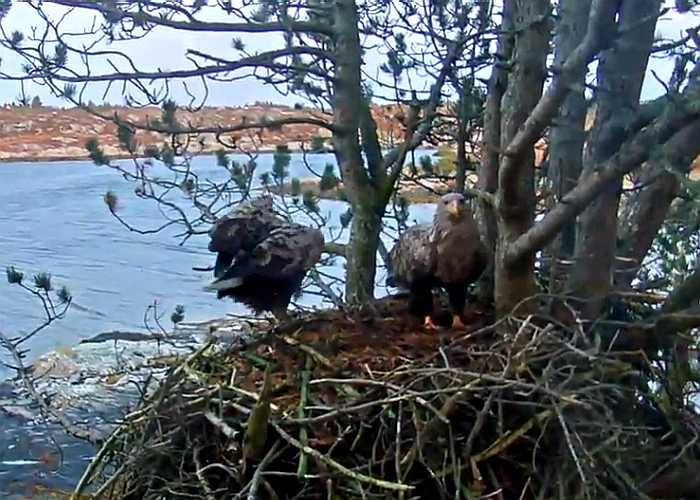 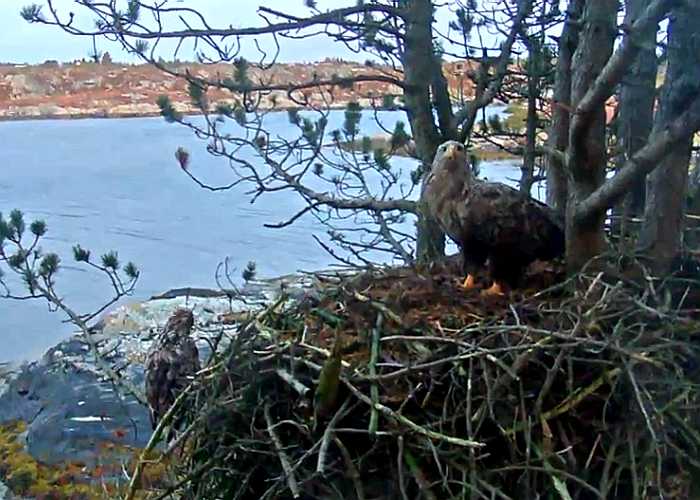 What happened to Baroness? Streambird is looking for her and announced a message to local residents.
Video of the couple by Streambird https://www.youtube.com/watch?v=gMObP9MypAM

This is the second missing female WTE this year. A female from a nest in Denmark was found shot dead.
Top

thank you very much for update. That's sad news. Especially bad news is that the Danish female was shot. That is horrible!

I saw the video by Lady Hawk. The baron accepts the female.
Top

Is there any evidence for what reason the female WTE in Denmark was shot? I don’t even want to think that something like this happened to Baroness! I think people in Norway will never do that! I really, really hope so !!!

Is there any evidence for what reason the female WTE in Denmark was shot?
...

Thank you very much for the information!
Top

16:40 the new female was in the nest for a very short visit. The Baron was not there.
This really reminds me of the Latvian nest in 2015. Robert was not dismissive at the beginning, but he was also not interested. After a while he pushed the female out of the nest. There were a few female who were interested.
We will see what happens here. I miss the Baroness. Maybe someday we will know what happened to her?
Top

New Female went out to the right at 07.35.
Male eagle was calling weak and short at 08.58. Warning call?
Probably the Baron.
Top

Baron into the nest at 16.09 - and down to the bouncy branch.
Preening.
Video by Lady Hawk of todays visits: https://www.youtube.com/watch?v=z7tApqWrMzI
-

From an article in Tidens Krav, newspaper: Believe in territory battle So what does Espen Lie Dahl think happened in connection with the women's change at Smøla? - I think the baroness is dead, but obviously can't be one hundred percent sure. There is also a possibility that she is injured and has just stumbled her way. - What we do know is that when a partner exchange happens, as it does in the nest now, the original partner does not reappear in the hedge population, says Lie Dahl. The most common cause of death in adult sea eagles is territory fighting. - Most likely, it is the new female who has been the strongest in a territorial match, believes Lie Dahl.

He says that this is an old nest that was used by another eagle pair in the 1990s. Then it stood unused for 15 years before Baron Blue and Baronesse Barfot took the nest into service. The baron has been named because of the two beautiful blue rings he is marked with, while the baroness is simply without rings, and thus barefoot. More swaps waiting Nevertheless, Lie Dahl does not think that we necessarily see so much for the new young female. - My tip is that we will probably see another swap of females in the territory in the near future. In populations with lots of sea eagles such as Smøla, it is not common for relatively young birds to be able to establish themselves in a territory. I am therefore not surprised if there is another female coming soon, the eagle expert concludes.
Top

albicilla, thanks for the article!
That's what I think too. I think the Baroness is dead and that we will see more females at the nest. It will take a while before the nest is used again. And I'm not sure if the Baron will continue to use it.
Top
Post Reply
1675 posts