The eaglet usually has its left eye closed, but sometimes it slightly lifts the eyelid. It is not known if it has vision in the sick eye, but because it has been decided that it will not be ringed there is no way to check it. Perhaps vision is partially preserved, and the eaglet will be able to survive in nature. 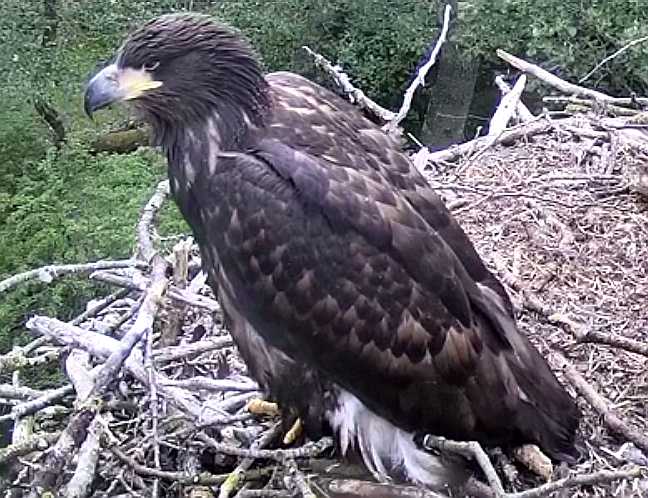 Parent brought a bird for eaglet

Eaglet exercises its wings and can fledge at any moment now. I keep my fingers crossed for him.
This year has not been successful for the eaglets, it may be bird flu?

Thank you for videos Mamicja.

The team around the nest has finally come to a realistic conclusion about the left eye of the chick.
And its possibility to survive:

Left eye
Written by Ole Friis Larsen on June 29, 2021 at 20.08
There have been many suggestions as to whether or not the left eye works. There have also been a couple of doctors who have analyzed images from ØrneTV or looked at the eye directly during the transmissions from the nest.

No one can know for sure without getting the eagle directly for examination at a clinic, and it will not happen - unless the eagle cub has an accident or does poorly, is found and comes to a care station.

On the team behind the TV camera, we agree that the eagle cub probably cannot use the left eye. Whether it is completely blind to the eye, we do not know, but we think so. Recent close-ups show that the eye does not have its normal shape and is gray-white inside.

However, there are a few interesting facts: A volunteer veterinarian at an American nursing home has described how he got a White-headed Sea Eagle (Bald Eagle), which is the North American 'version' of our Sea Eagle for treatment and could state that it had been blind on one eye for a very long time, but still had managed. The veterinarian then found another example of an eagle that had been shown to live like a wild bird for a long time with only a single eye.

So it can be done - but we do not know how often an eagle can live on, after having one eye destroyed. The two examples could be two birds out of a hundred, a thousand ... or 2.

Sea eagles feed largely on fish. In another species that feeds on fish, the Sule/Gannet, it is not uncommon to see one-eyed birds. Owls breed close together, and this often leads to fights where they chop after the eyes. Thus, there are quite a few one-eyed Suler who seem to do very well with just a single eye.

It also suggests that it may be possible.

We cross our fingers for the eaglet

09.09 A small bird was brought by Male and was fast eaten by the chick 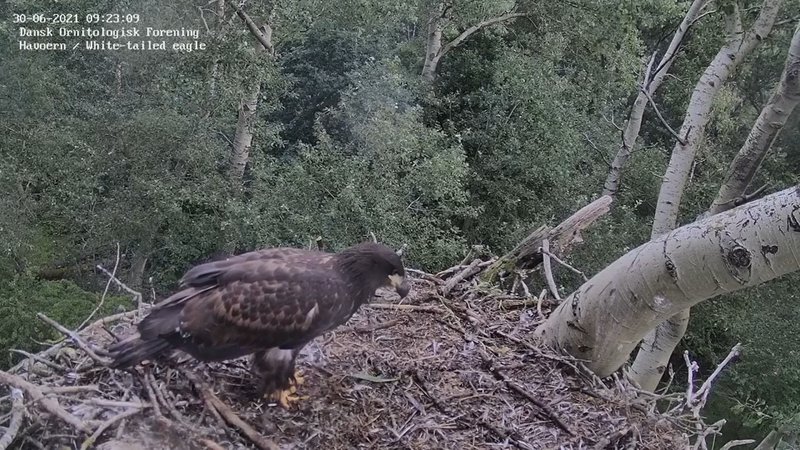 Thanks Mamicja and albicilla for your posts.

I read earlier of that Bald Eagle "One eyed Jack" and tend to hope for a miracle with this eaglet. He has learned to use his eyes from the beginning in his own way - you never know how wonderful the nature can be! Fingers crossed for him!

There has never been shortage of food this spring. So why we see hunger streaks in the plumage of the eaglet - I do not know. Is it from the stress or sickness in the left eye? 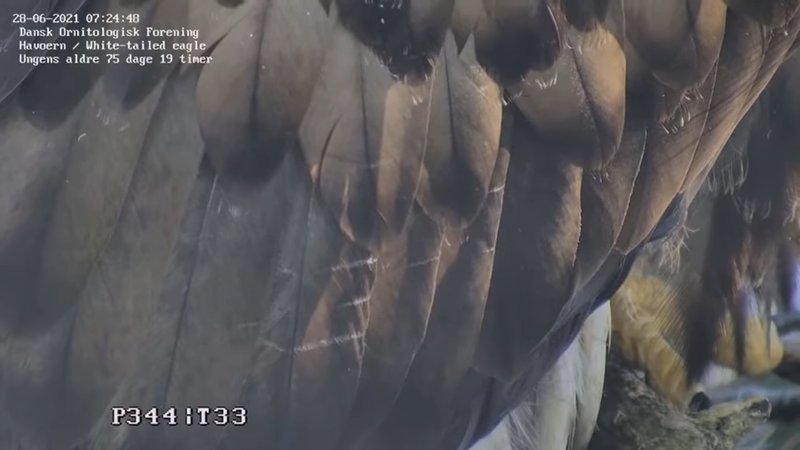 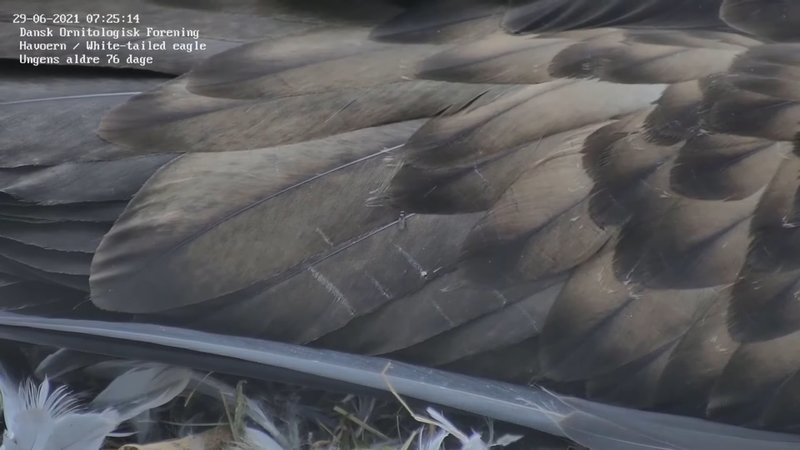 The eaglet is now 80-81 days old.
Lots of wing exercise with calls followed by rest also with calls - and search for leftovers in the nest. 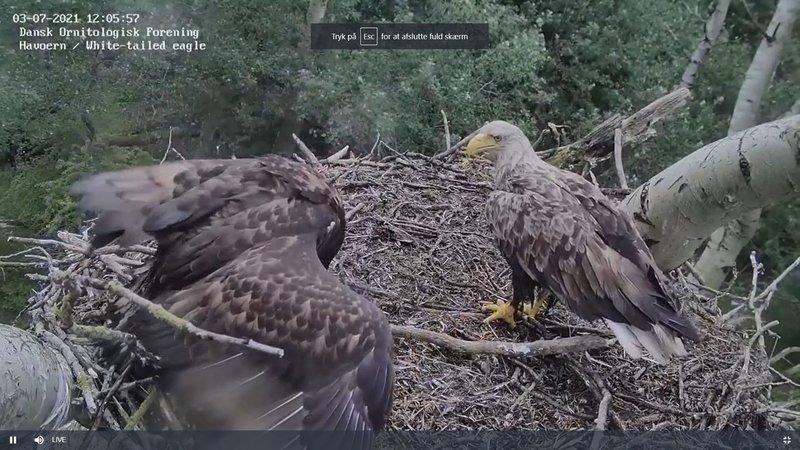 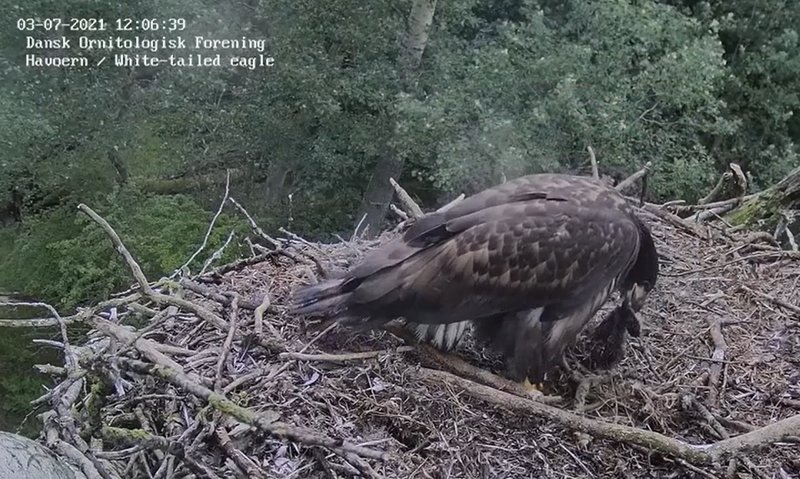 I learned from the SWFL Eagle nest info that those thick branches in the middle of the nest are meant for the eaglets to train branching, grabbing a branch in a tree. So clever are eagle parents

07.12 The young Eagle has left the nest. TAKE OFF has taken place.

A little wind was blowing from South East and it was in that direction the Eagle took off.

From DOF Danish Birdlifes video 1 second before Take Off 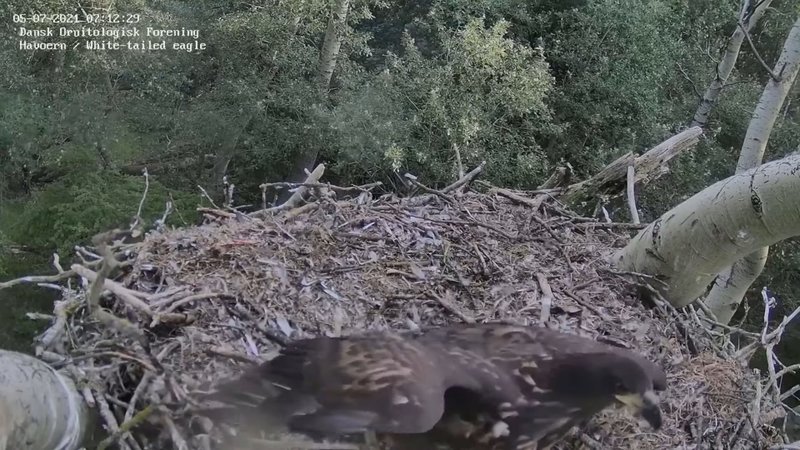 An empty nest. A moment ago I heard the eaglet who must be near by the nest, hope to see it soon again. 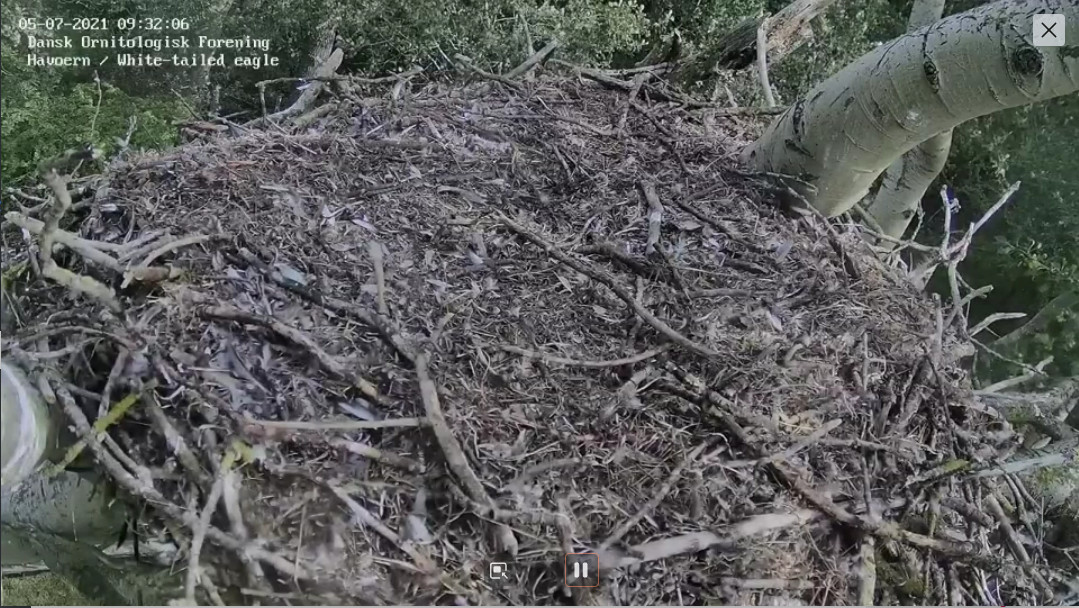 Here is the video of the departure of the eaglet:
https://www.youtube.com/watch?v=2nJQt6TAHm0

Here a video of the last flight trainings before fledging
https://www.youtube.com/watch?v=V-Jb47DZLjY
Top

Thank you all in here for comments, photos and videos of this years breeding in the nest of the WTEs.
And thank you to DOF Danish Birdlife once again for the transmission this spring.
And also to Ole Friis Larsen with his qualified answers and comments on the website.
Top

The female brought the prey to the nest at 20:45.
Since she did not eat the bird, the male decided to take it. The female defended the food and eventually began to eat herself. At 21:31 she left with the rest of the food. I was hoping she would find the eaglet and feed it

Some information about the eaglet and an assessment of its survival prospects
https://www.dof.dk/om-dof/nyheder?nyhed_id=1988
Top

I remember a buzzard with a sick eye who came to Makov in winter 2018 and ate chickens from the feeder. It was a very peaceful bird and never attacked Makov inhabitants. Probably this eaglet could live somewhere in Safari-park, because his chance to survive in wild nature and have a family are rather low.
Top

asteria wrote: ↑July 6th, 2021, 7:33 pm I remember a buzzard with a sick eye who came to Makov in winter 2018 and ate chickens from the feeder. It was a very peaceful bird and never attacked Makov inhabitants. Probably this eaglet could live somewhere in Safari-park, because his chance to survive in wild nature and have a family are rather low.

I have understood that there are no bird parks in Denmark for this kind of cases. On the other hand DOF has decided early not to intervene nature's course this time either. So there are very few options for this eaglet believed for the time being. [In Finland we have a wild bird park where it would be possible to place also this kind of eaglet, but I am afraid DOF has decided to let the nature have its course: http://heinolanlintutarha.fi/].
Top

The kid is alive and well.
Posted by rasmus romme on July 12, 2021 at 11.03
Have just spotted the cub and an adult eagle together on the dike, near the nest. It polishes feathers and seems to thrive, so so far no problems. 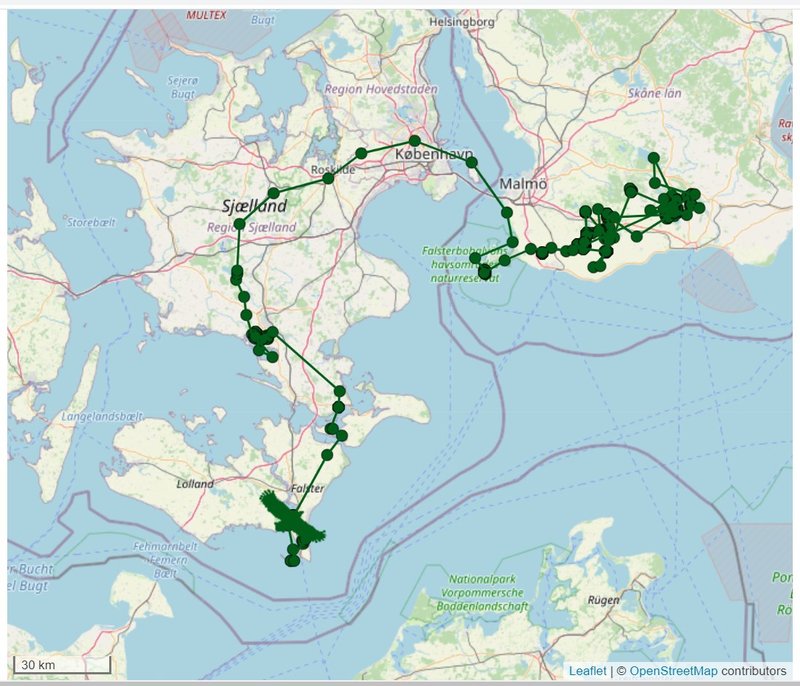