10:10 golden eagle in nest jumped on the right branch out of sight 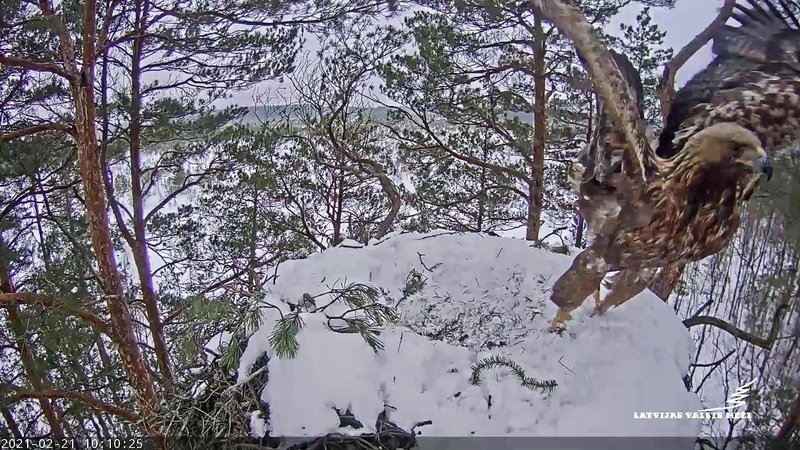 
10:12 A golden eagle is flying around, the other is calling near the nest
he landed on a tree on the right- to cut a branch? 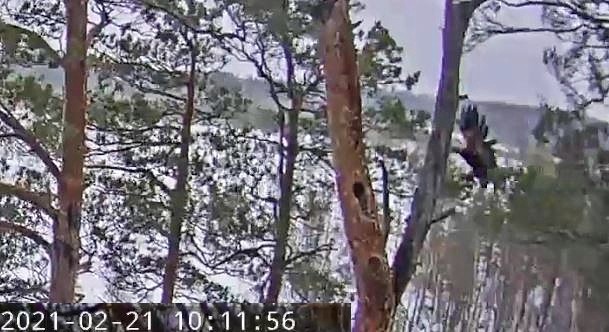 10:13 and came in with that branch - Golden Eagle on the right is still calling now and then 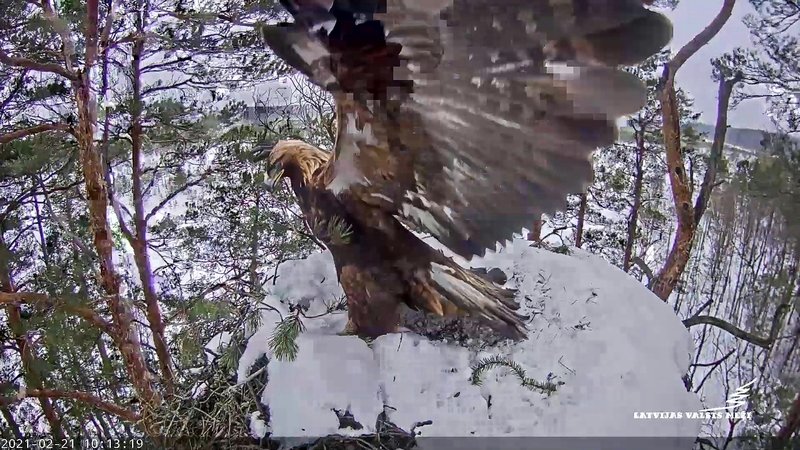 10:04
Spilve's new friend!
He makes strange sounds, very different from Virsis.
His feathers are very light and speckled, his eyes dark (not as dark as Spilve's).
The images are not great, the streaming here is bad today.. 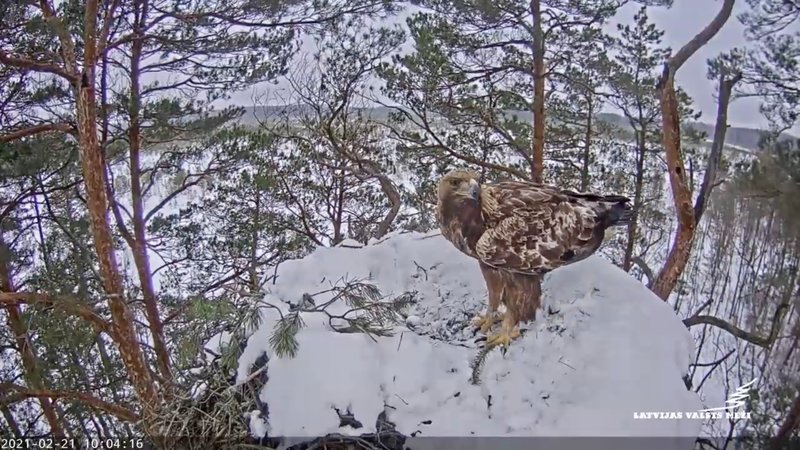 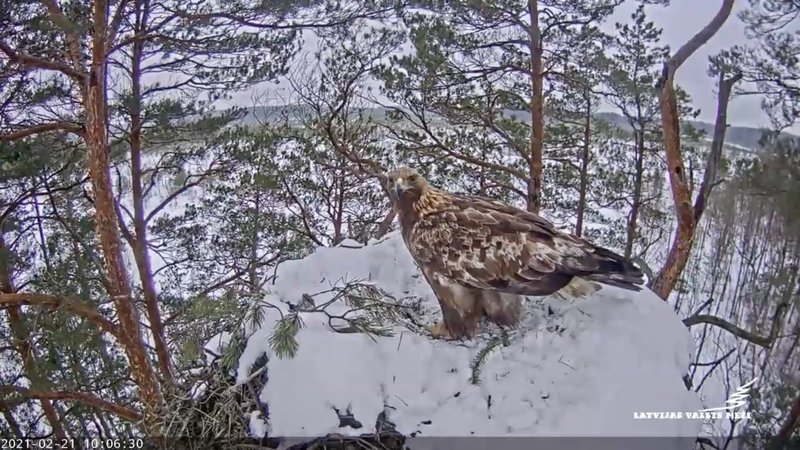 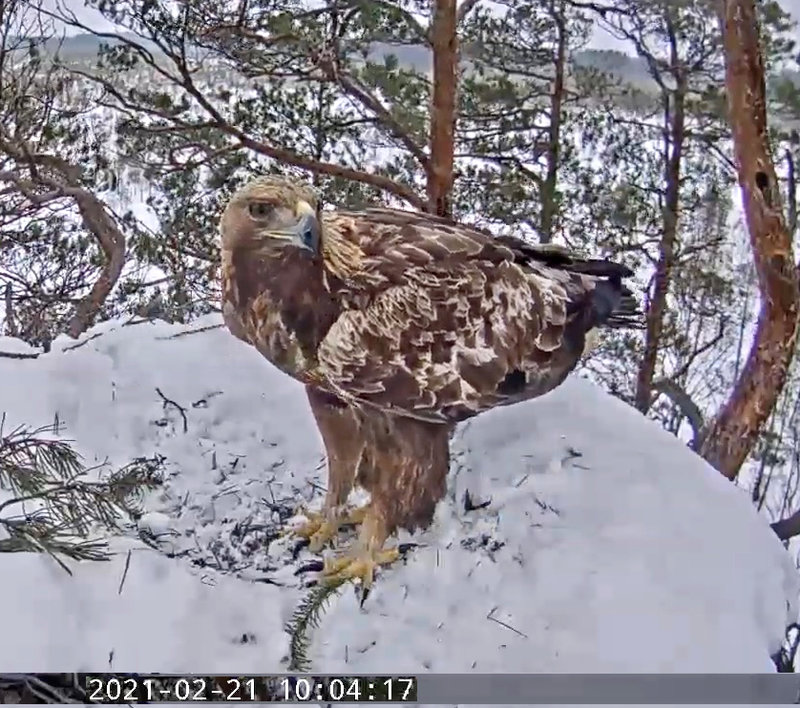 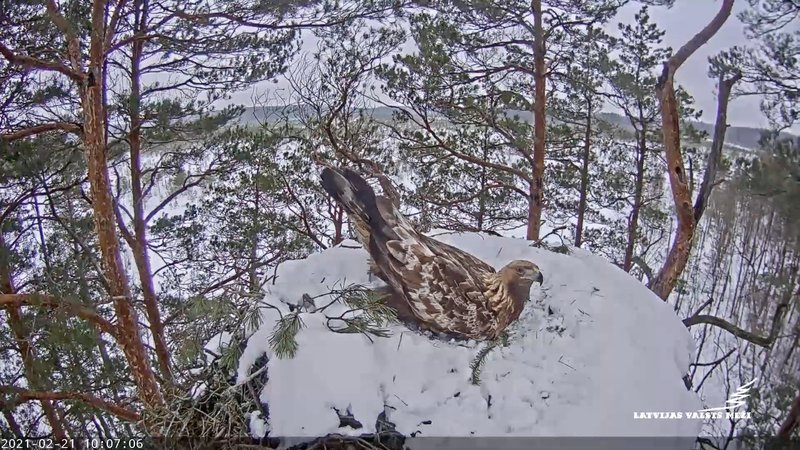 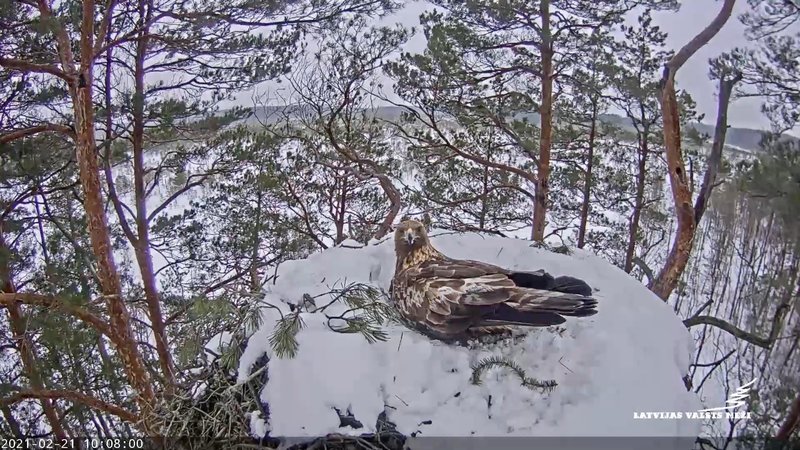 Spilve fell from above - That looks great 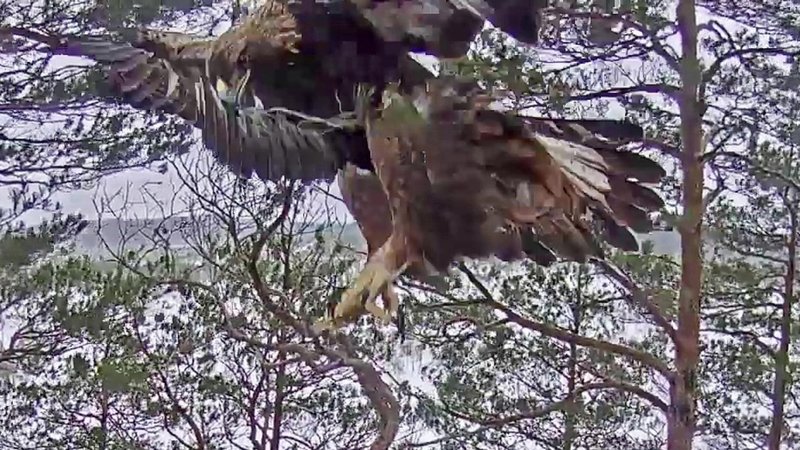 the twig is in her beak 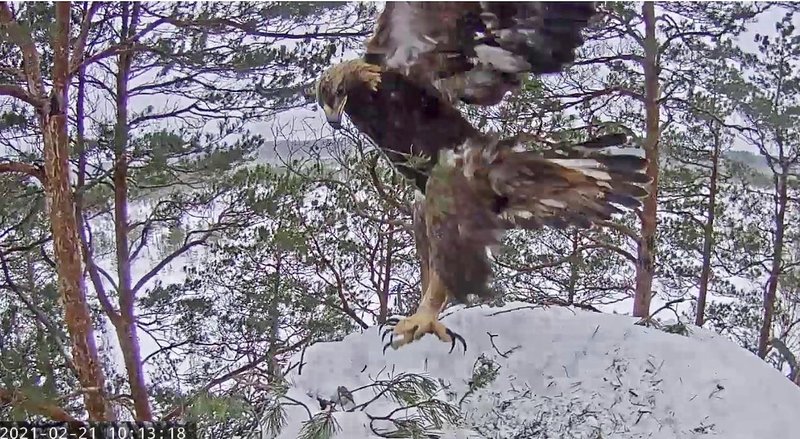 10:13 she is digging in the nest bowl... GE is still calling from the outside 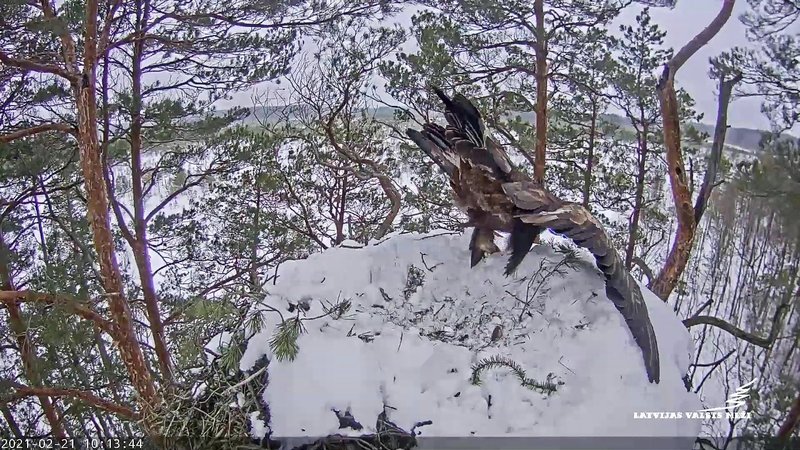 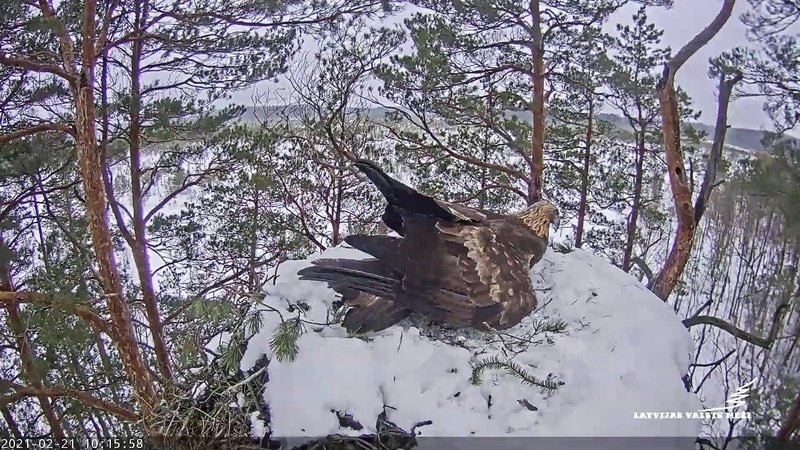 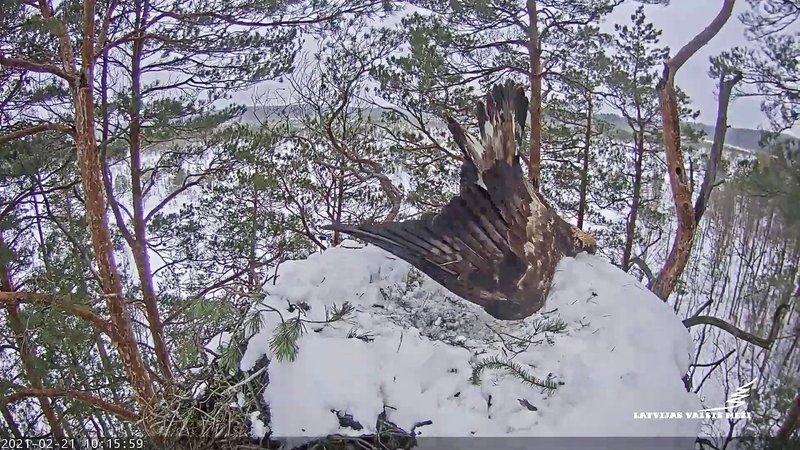 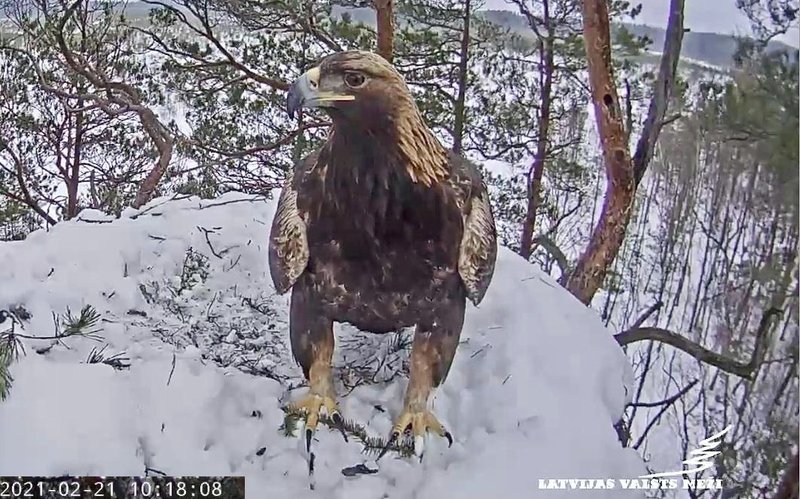 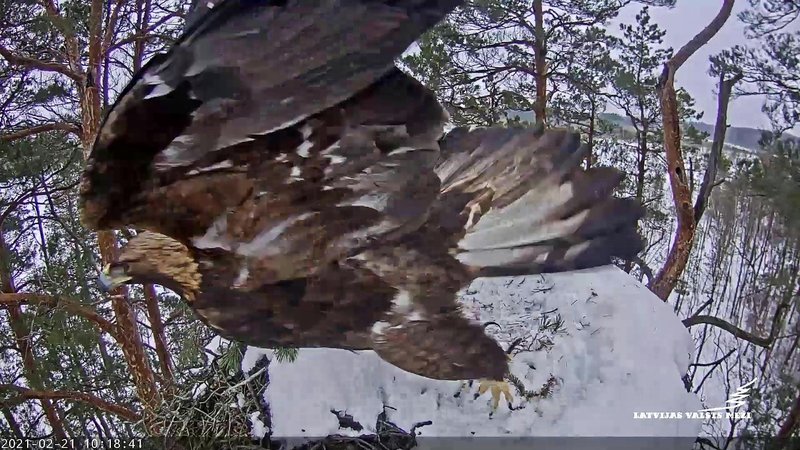 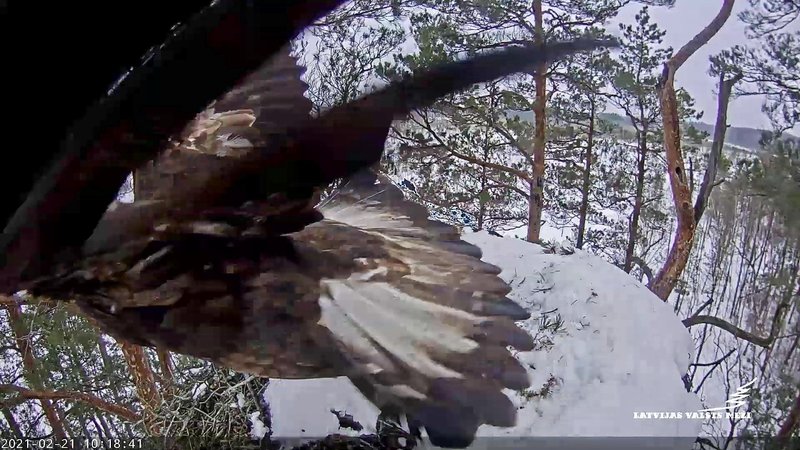 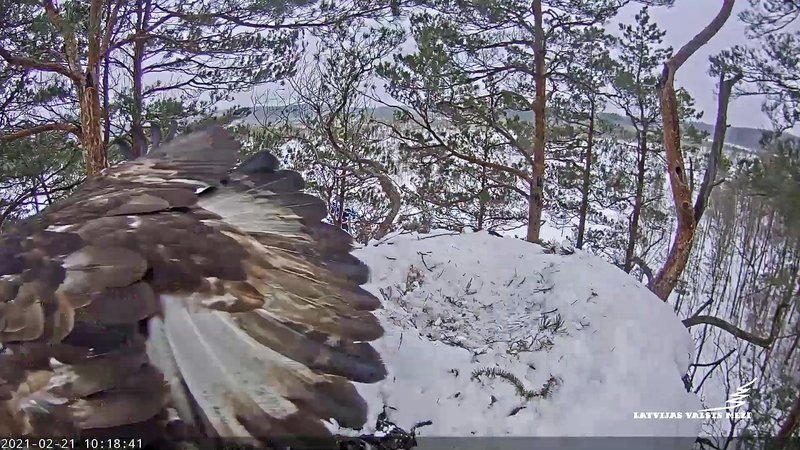 Video of the whole visit of the eagles soon

pictures from the other GE later.. I will to the Baltic Sea for a few hours

GT: Hello, Watchers! This is a great day for all of us - both for Spilve, who remained faithful to the nest and welcomed the young male, and for us observers, who are also loyal to Spilve and we waited with great patience for this good news. I really hope it's not too late to start nesting. Last year, the first mating was heard on February 9 (12 days earlier than this year), the first egg was laid on March 28 (this year, the first egg would theoretically be expected 12 days later, around April 8/9), and the second egg on April 1. Estoniangolden eagle researcher Gunnar Sein wrote that the first egg in Estonia is laid on March 8-5. April. It seems that eagles can still half meet the deadlines without significant time lags. Time will tell what Spilve will have decided with the new owner. Please everyone - think about a Latvian and appropriate name for the young male in time. It would be good if we could find a word related to a swamp and a forest, another typical word would also fit.
Top

This arrival is great news for Spilve and for this nest

that everything works out .

Looking forward to conversing with you all again soon.

“Never send to know for whom the bell tolls , it tolls for thee”
Top

GT: by Uģis Bergmanis »21 Feb 2021 18:34
Good evening, Watchers! For the next 1-2 weeks, the camera's operating time will be set from 07:00 to 14:00. As the light conditions improve, the time will be extended. The thing is that we arrive at the router and thus the camera tomorrow morning at 07:00. This means that IT specialists will start correcting the settings around 07 and the camera will start operating between 07:00 and 08:00 with the next switch-on time of 07:00. Because eagles are most active in the morning.

I only saw it this morning.
All wishes have come true, as it looks.

Spilve looks beautiful, like before.
And her new mate is a very handsome man.

I think I heard mating noises before Spilve first came to the nest yesterday morning.

Big thanks to everyone who followed and reported.

(especially Liz who always sends the newest news)
I will keep watching and hope for the best.

Info by Ugis B. YT- Chat: Unfortunately, I have to wait for the morning. We arrive at the router only at 18:00, then we will know something more. Those algorithms are complicated

great to see you!

Usually Marfo documents here. She is also in contact with Ugis B. She wasn't here, so I documented. I just don't have enough time for multiple nests. When the season begins, other nests are also occupied. I am waiting for LSE and the Latvian Slitere WTE Nest 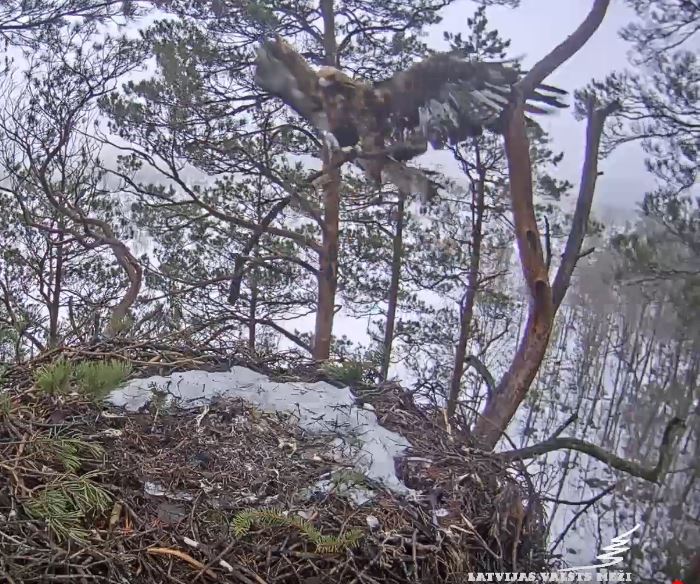 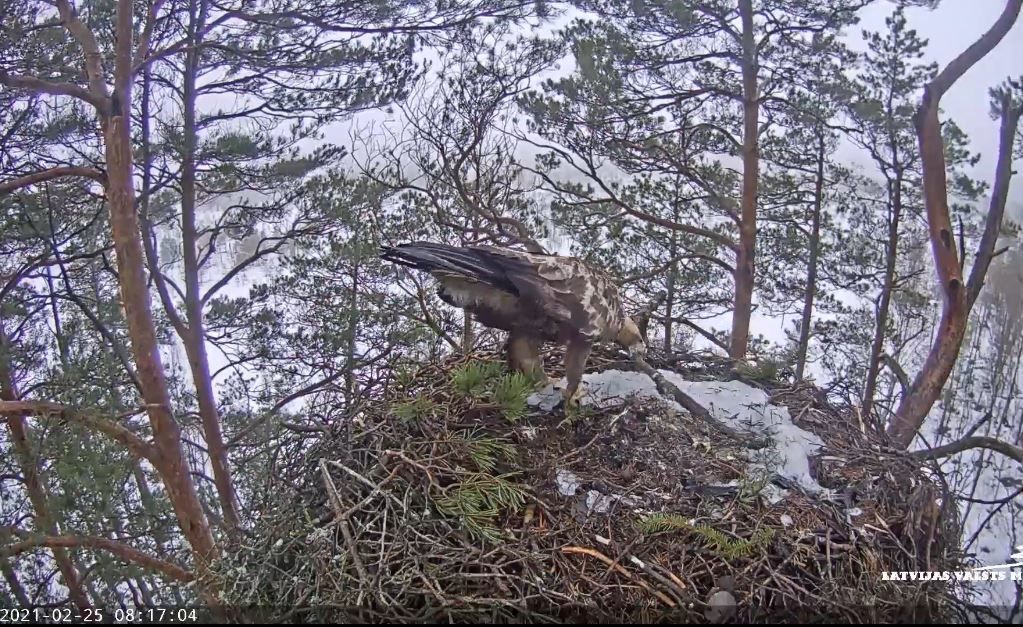 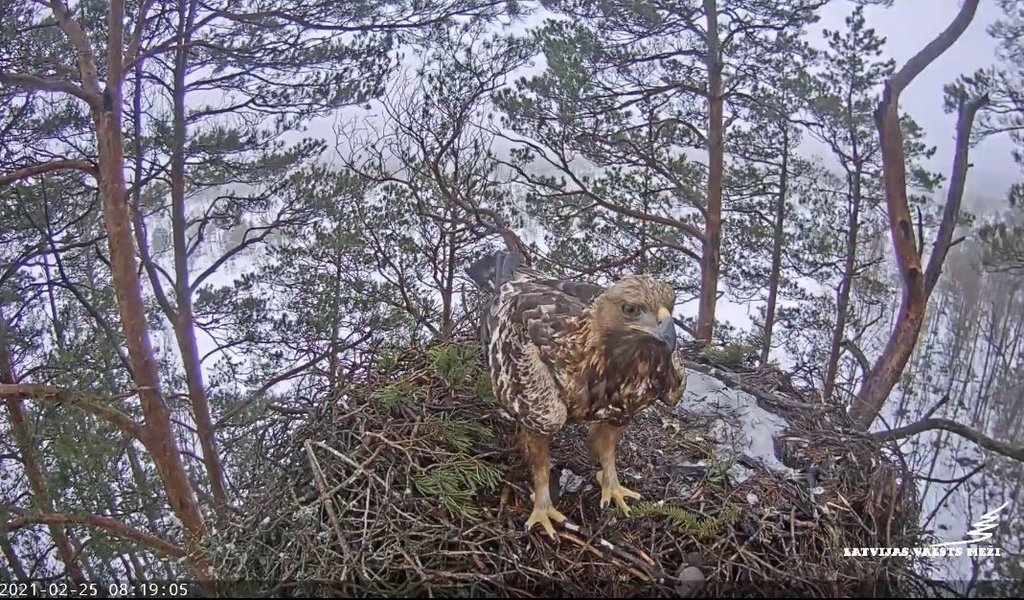 GT:
That's good news, you can also hear grouse roar, one of the most important food objects nearby. If there is a male, there will be a female 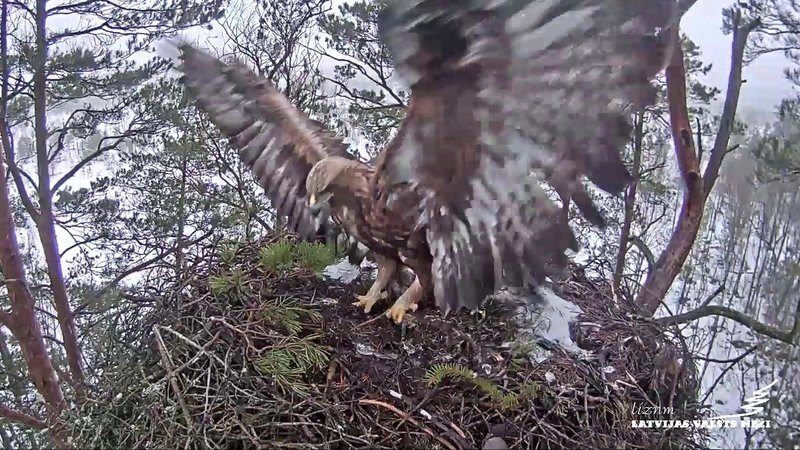 He jumped on the right on a branch
ZOOM video

Yes, he jumped to favorite branch close to cam.
He stayed there for a while.
You could hear him flew away at 08.25.25.

Hope we can see them both together.
But now it says wait

What are you handsome!

I see there are already posts about Grįslis' visit

So good to see him here again and what a beautiful bird he is! He is very energetic and it is difficult to make screenshots because his movements are quick.
It is remarkable to see that he clearly notices the remains of Klints which he looks at attentively. He also avoids walking over the spot.
He observes the feathers carefully and picks them up now and then. 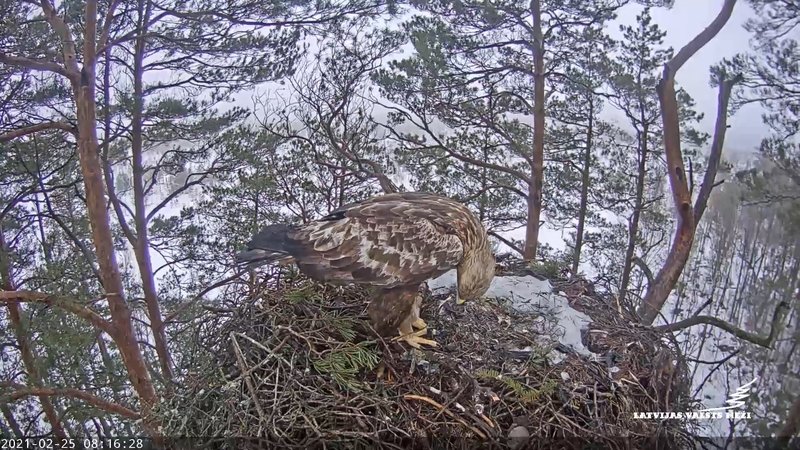 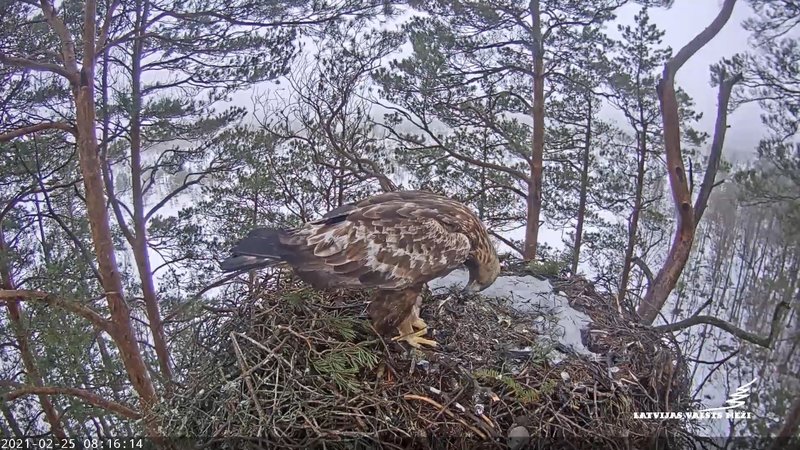 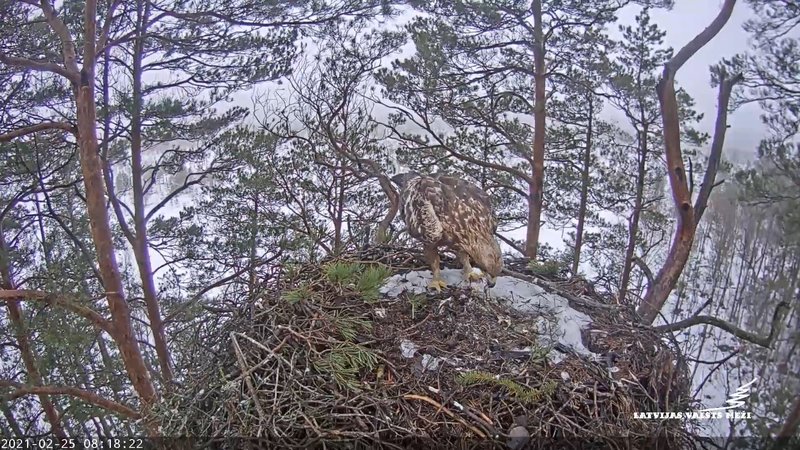 For me it is unlikely that Grīslis suspects a dead conspecific here. For Spilve there is no longer a dead chick either.
Knowing that the eagles may offer their chick a dead one, then I don't know how an eagle that has never been here before could see feathers and bones as conspecifics. I'm sure, they have not such "feelings"
Top

Liz01 wrote: ↑February 26th, 2021, 6:26 pm For me it is unlikely that Grīslis suspects a dead conspecific here. For Spilve there is no longer a dead chick either.
Knowing that the eagles may offer their chick a dead one, then I don't know how an eagle that has never been here before could see feathers and bones as conspecifics. I'm sure, they have not such "feelings"

I did not mean that he recognises it as being Klints or even one of his own species. I merely observed that he looked at it closely for quite some time and picked up feathers a few times. He didn't just walk over the nest as if there were only twigs. That is what I found remarkable.
I did not write about his "feelings" nor his thoughts because I simply don't know.
Top

Do you know how familiar the new partner is with a breed or, better still, with the preparations for nest building? He may well notice that there is organic residue in this nest. Which are actually not traditionally in the nest when there is neither feeding nor courting.
The animals can certainly tell sticks, branches, grass or leaves from feathers or bones or meat! They build and live according to this selection process.

I understand Marfo’s thought. Grisli will at least be a little irritated. Anyway, I am surprised that Klints' body was neither flown away nor eaten. Or did Spilve ever eat it? Not even when there was a shortage of food. Many birds carry their dead chicks out of the nest. Or do they eat ... Not here.


I wouldn't talk it to death any further. This Observation is a gift and I would not destroy the magic if a living bird met a dead conspecific with caution and respect.

I don't dare to say it ... I think he's a little thin. Maybe tough but somehow thin.

I have no idea about golden eagles. Maybe Grisli is in better shape than I expect.

Polly, Spilve has eaten a part of Klints (So far I remeber.)