Solo, Hana, Justyna thanks for the great job you did here.

I really appreciated, knowing where our storks are and whether they are doing well.

No new data from Mare since October 2nd.

I hope everything is OK with her.

Thank you very much!

Pioneer - stork from Złoczew (year ' 20)
"The autumn hike of a black stork hatched in 2020 in the nest in the forests of Nadleśnictwo Złoczew Lasy Państwowe RDP in Łodzi looks very interesting. This stork in 2021 spent the summer in the south of Ukraine and in Russia between Don and Volga, far beyond the Azov Sea

. Mid September 2021 started the fall hike.
He could have returned ′′ by footsteps ′′

through Russia, Ukraine, Romania, Bulgaria and Turkey, but he headed south - straight to the powerful Caucasus 🏔. He wasn't scared by the tops of over 5 k m above sea level, the most famous of which in Poland are Elbrus (5642 m) and Kazbek (5054 m). He flew into the mountains of the Caucasus from Russia through the Ardon river valley. He initially flew along the Osetinian War Road, but later abandoned the rock road and flew straight south

. His GPS tracked down just before the Caucasus line at 3606 m above the Caucasus border, which runs at about 3300 m above sea level. Furthermore, it was easier. He flew across Georgia, later across Eastern Turkey, western Iraq and flew into Saudi Arabia. He didn't notice his friend from Estonia

-Eedi, who had already arrived earlier and stopped for a longer stop about 90 km from the Red Sea shore. Our stork flew further and finally reached the Red Sea shore. And here comes a new, serious problem. The Red Sea has a width of about 220 km in that place

.
Such a flight over the water is within the range of a black stork, but it is also very exhausting, because there are no currents above the water 🌬, helping the land rise high into the air, and then glide, slowly losing altitude, but at the same time saving strength for further flight active.

Our stork chose a safer option and flew further overland south, right at the end of the Arabian Peninsula. He flew 1 X 2021 to Africa flying from Yemen to Djibouti through Bab al-Mandab strait, which is about 28,6 km wide here. Thus, our stork from Złoczew has chosen a brand new one for Polish black storks, a variant of the autumn trip to Africa. 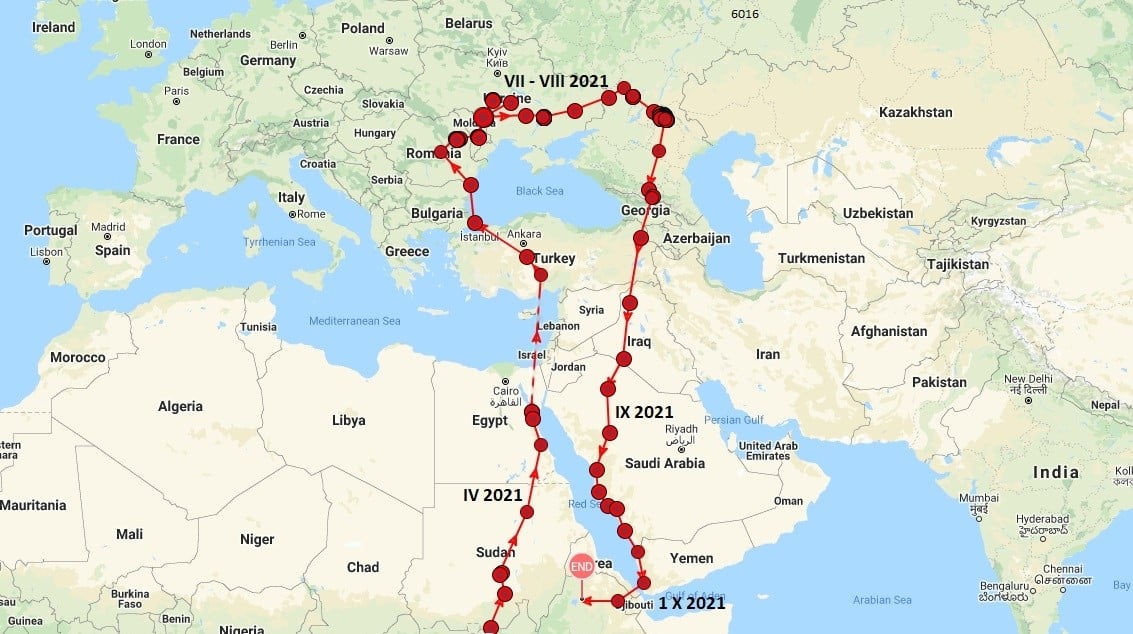 I am quite relieved. I was in worry about her. Last data transmission was on October 2nd. There she was in Israel!
Now she is already in Sudan! Between the blue and white Nile south of Es Sa'duna 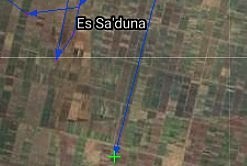 She chose a strange path
She flew without stopover directly from this pond a quite distance across the Red Sea to Sudan. She flew on the opposite the Gulf of Aqaba for the first time. Why ever she did it. She must have had a reason.

that was a great pleasure for me

, thank you for the good news about Mare 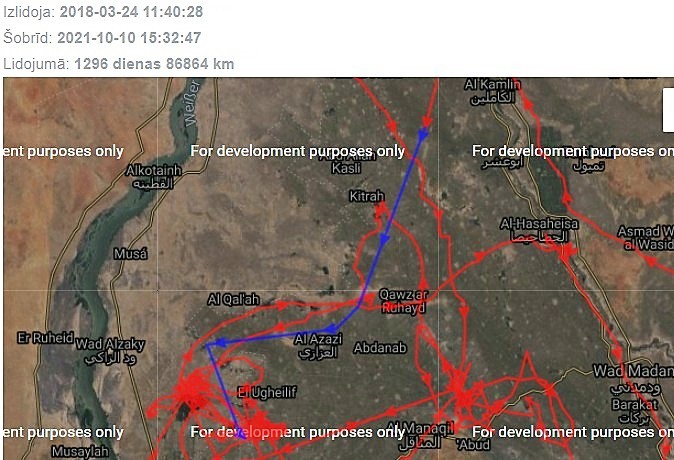 - she is still in Sudan

She is still in the same area

Everything is normal in Goris LV. (I do not like Goris.. all is red and dark )

When I look at Movebank data,her last point of transmission is nowhere.

It seems that there is grassland there. Fields and so on

PL ŁÓDŹ DAB
Freesia has already reached its wintering grounds, Ethiopia. Florek gave the last signal on October 3, he was on the Nile near Luxor. The Sahara before him, and contact was cut off. We hope that he flew over the desert and he will answer when he reaches the Sub-Saharan region.
Top

Slowly our storks reach their wintering grounds.
Freesia left Poland on August 7 and flew over the following countries on its journey south: Ukraine, Romania, Bulgaria, Turkey, Syria, Lebanon (without staying overnight), Israel, Jordan, Egypt, Eritrea, and Ethiopia.
She flew to Africa on October 7, flying 28 km over the Gulf of Suez near Hurghada, and arrived in Ethiopia's wintering grounds on October 15, after 70 days of travel.
Florek

flew to Africa on October 2. On October 3 he aimed at the Nile near Luxor and has not yet sent any new information about his location. He may have already flown through the Sahara desert, but he must have entered an area without cellular coverage and we have to wait for new information.
Less fortunate was the young black stork with logger No. 6151 from the Poddębice Forest District, who chose the western hiking route and reached Mauritania through the Czech Republic, Germany, France, Spain, Morocco and Western Sahara. There, on October 5, 1370 m from the Atlantic shore, the logger stopped showing stork activity.

FB.. another juvenile transmitter storklet is in Greece


The young black stork from Czech Republic equipped with a transmitter (offspring of a handicapped parents) has chosen an unusual migration route - he is on the Greek island of Crete.
Today he was photographed in Heraklion.

You can see that it feels disturbed by a photographer. He / she is way too close! 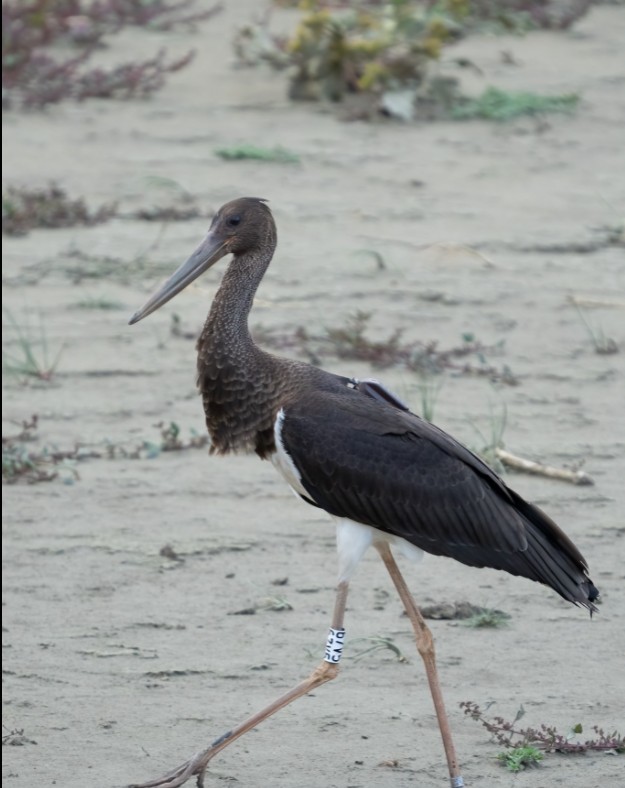 EDIT:
I was hoping Udu will find another storklet and that they stay together in Greece.. Now I saw, Udu left Greece

there is a very poor GSM/3G/LTE coverage

Is Blue planning to visit Cyprus as well?

Liz, Blue is in Crete not in Cyprus

Return to “Migration Maps and News”