For the first time, we have a webcam looking over a Grey Heron colony.

This camera is the old PTZ camera from Eagle Feeding ground days. As some years have gone by since then, the quality of the image may have deteriorated with age. But it is fine for a first attempt to show PTZ transmission from a remote place. Actually, this heron colony is not in such a remote place, because there is a small road through it, used by few people every day. And as it is possible to see in the camera view, there are human houses quite close by.

Heron colony with camera is one of the biggest in Estonia with some 300 pairs of Grey Heron and at least a few tens of pairs of White Egret. With the help of camera we can see only a part of breeding colony. Grey Herons breed in the same place (formerly in a forest where clear cut visible now) for at least twenty years. During that time trees have had too much fertiliser from the birds and may dry out in time. Actually, it is common case for big heron colonies.

Camera is situated in a forest owned by Ants Laikmaa Museum (of one of the most colourful personalities of Estonian art, having gained prominence both as a portrait painter and a landscape artist). They agreed to the use of the camera on their land and probably will use link also in they web site. Part of the colony is situated in the neighbours forest. That neighbour has kindly agreed to give us energy for the camera.

The camera is operated by voluntary operators, as it allows to pan, tilt and zoom. All our seven nest cameras are 2017 and 2018 partly supported by Estonian Environmental Center and managed by Estonian Ornithological Society. Eagle Club is involved as well voluntarily.

In order to protect the privacy of local residents, please DO NOT POST PICTURES WHICH SHOW A RED HOUSE in the background.
It is better to avoid complaints about our cameras.
Top

Three photographs, taken by Urmas, during installation of the camera.

Link to the webcam (Warning - It is noisy!)
http://pontu.eenet.ee/player/haigur.html

Weather near the heronry.
https://ilm.ee/haapsalu/
Top

From wikipedia. (https://en.wikipedia.org/wiki/Grey_heron)
The grey heron (Ardea cinerea) is a long-legged predatory wading bird of the heron family, Ardeidae, native throughout temperate Europe and Asia and also parts of Africa. It is resident in much of its range, but some populations from the more northern parts migrate southwards in autumn. A bird of wetland areas, it can be seen around lakes, rivers, ponds, marshes and on the sea coast. It feeds mostly on aquatic creatures which it catches after standing stationary beside or in the water or stalking its prey through the shallows.
Standing up to a metre tall, adults weigh from 1 to 2 kg (2.2 to 4.4 lb). They have a white head and neck with a broad black stripe that extends from the eye to the black crest. The body and wings are grey above and the underparts are greyish-white, with some black on the flanks. The long, sharply pointed beak is pinkish-yellow and the legs are brown.
The birds breed colonially in spring in "heronries", usually building their nests high in trees. A clutch of usually three to five bluish-green eggs is laid. Both birds incubate the eggs for a period of about 25 days, and then both feed the chicks, which fledge when seven or eight weeks old. Many juveniles do not survive their first winter, but if they do, they can expect to live for about five years.
In Ancient Egypt, the deity Bennu was depicted as a heron in New Kingdom artwork. In Ancient Rome, the heron was a bird of divination. Roast heron was once a specially-prized dish; when George Neville became Archbishop of York in 1465, four hundred herons were served to the guests.

By Wikipedia (https://et.wikipedia.org/wiki/Hallhaigur) there are 1500–2000 pairs at breeding time and 30–300 specimen in winter.
During 2007-2014 there was a project "Haigruotsija" wherein almost all colonies were mapped and listed. By this research there were 60-65 colonies in Estonia

Grey Herons are so far one of the least studied
large bird species in Estonia.
It has been an ongoing collection of information of Grey Herons’ colonies in Estonia
since year 2007. There are 58 colonies that are still existing, 13 that are non-existent by
now and 11 single nests counted between years of 2007 and 2013. Successfully were
mapped 47 of existing, 11 of currently non-existing and 9 of the single nests by
coordinates. In order to describe the known colonies of Grey Herons and to identify the
factors that had an influence to the choice of their preferred nesting sites the analysis of
spatial data and the statistical analysis were used to compare corresponding indicators of
nesting sites randomly chosen locations.
Of the types of living areas the Grey Herons in Estonia mostly inhabit mixed forests and
the most common body of water near their colony is a pond. But at the same time these
factors do not have any significant influence of their choice of the area for their colony.
Same applies to the proximity of roads or other colonies. Moreover the important
factors that proved to influence their choice of the area for their colony turned out to be
the distance to the body of water, to the closest residence or other building or even a
human commune – town or village that Grey Herons preferred neighboring.
The attitude of the people towards Grey Herons is rather negative. This is caused mostly
by the sounds constantly heard from the colony, the effect of their acid excrements to
the forests that would decrease their economic value and even herons’ possible negative
influence to the local fish-farms. The results of the current study show that Grey
Herons’ preferences of the choice of their habitat are even deepening this conflict and
eventually are likely to negatively impact the survivability of the population of the Grey
Herons even further. Despite of Grey Herons being currently not on the list of
endangered species, it is essential to turn more attention to them due to their habitats’
tendency to disappear as a result of cutting down forests and by that minimizing their
choice for possible habitats. This would help to avoid possible risk of turning this nonendangered
species into an endangered one.
Top

Other Heron colonies with webcams.

I'm very glad about this new forum, interesting and nice birds... I will hope that us will be more and more here who are interested about gray herons life.

I put here some pictures what I did about their nests:

To explain about this camera. Yes, it is PTZ but it was decided to put it on automatic mode as there is both so much and so little action.
Maybe when chicks are visible, we shall decide to operate it by human hand, but for now, auto pre-set is suitable.
Top

it's a great webcam

It's awful isn't it?.
I suppose it is typical of a heron colony.
Top

A new cam, but what a strange noise! 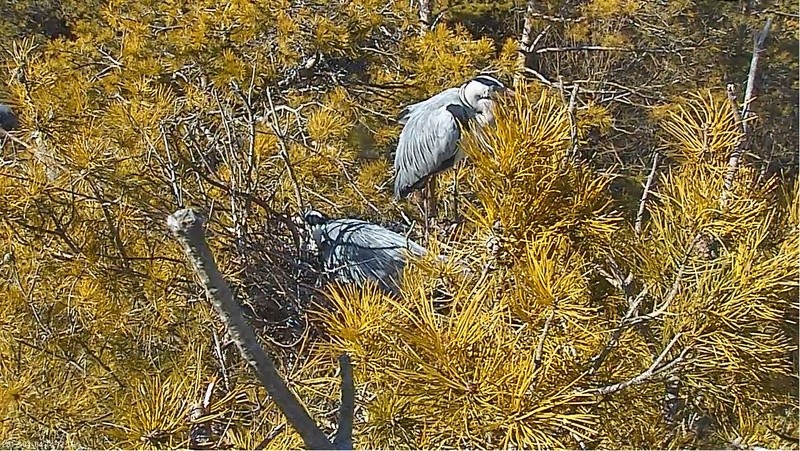 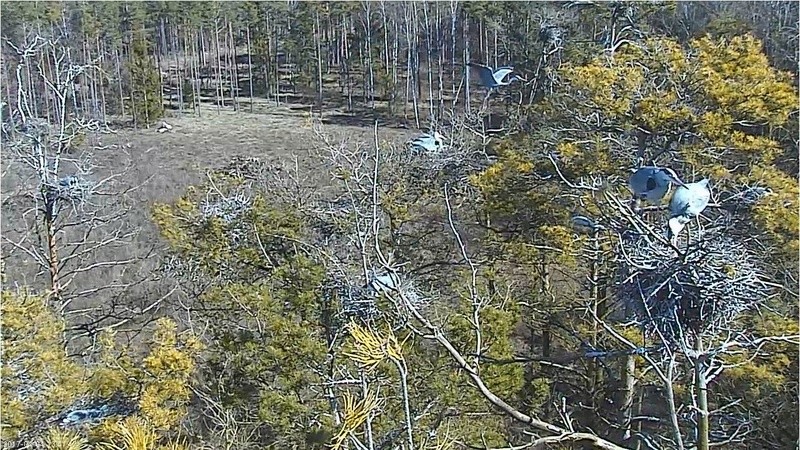 Thank you for this discovery

Jo UK wrote: In order to protect the privacy of local residents, please DO NOT POST PICTURES WHICH SHOW A RED HOUSE in the background.
It is better to avoid complaints about our cameras.

Of course, i read it and i agree!

It's so interesting to observe those beautiful birds... all are busy!

Indeed a lot of noise, but I actually think it's nice.

Once we spent a few days on the island with grey heron colony and our tents were very close to the trees with their nests. They were noisy and got up at 6 a.m. but it was not annoying at all.
Top

Wow! Beautiful new cam from gray heron, thanks!
The nature needs us not, but we need the nature
Top 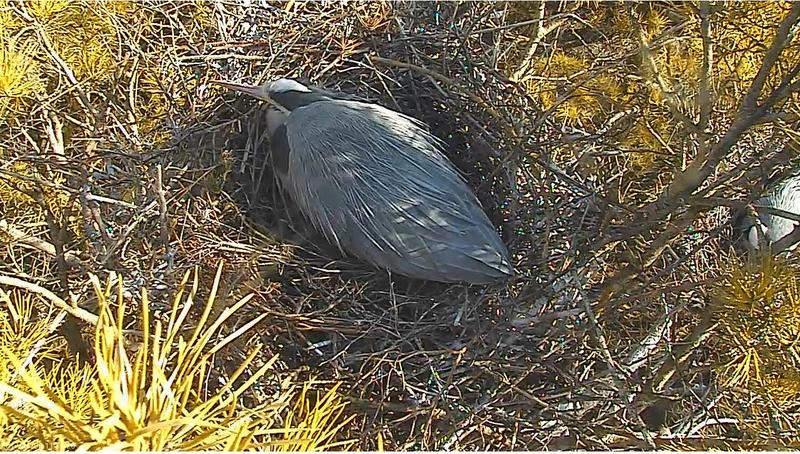 Thinking about the eggs that are sometimes visible - maybe we can expect them to start hatching around April 24 - 27. Does anyone have any better information about this?
Top

There is always a quiet (forum, not colony!) time, while the eggs are brooding.
Top
Locked
1146 posts