Thanks raija. Yes, Kaia has arrived and they have begun mating.
Any further comments about the nest activites will be welcome on the Black Stork Forum, as we have stopped Following now.

We have fantastic news!

Pikne spent the winter in Ethiopia and is flying north since May 24.

Pikne is currently in Israel, west of the Dead Sea, close to the Negev Desert in the Yatir Forest.

Yatir Forest is a forest in Israel on the edge of the Negev Desert. The forest covers an area of 30 km2, and is the largest planted forest in Israel.
The first trees were planted in 1964 by the Jewish National Fund at the initiative of Yosef Weitz. It is named after the ancient Levite city of Yatir. The forest is situated at a relatively high altitude (between 400 and 850 metres above sea level) in a semi-arid region with an average yearly rainfall of 300–350 mm and low humidity. The ground is composed of hard lime rocks, and soft chalk rocks.
https://en.wikipedia.org/wiki/Yatir_Forest 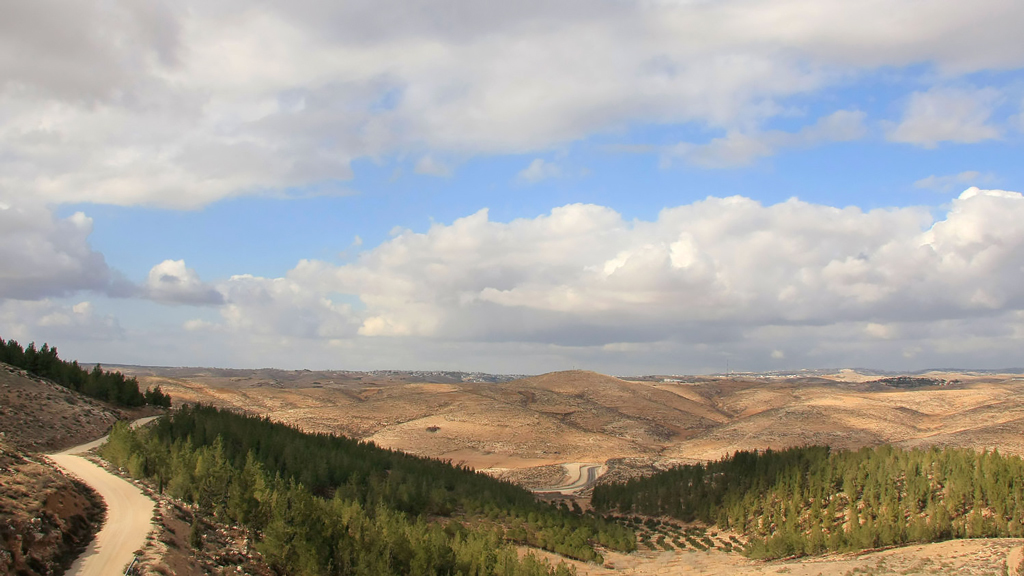 
Text on Birdmap:
PIKNE
Juvenile Black Stork, hatched as second chick in the brood on the same day as oldest chick (28 May). Also first, maiden flight out of nest they made same day (4 Aug) with oldest sibling named Udu, being 68 days old. But unlike the younger and older sibling, Pikne was in no hurry to migrate and allowed the father Karl II to feed for another three days (sometimes too much provided) and waited for a favorable moment. On the morning of August 20, such a suitable time had probably arrived, and Pikne headed south without major mistakes. The first longer stop was made on August 23 - September 2 in Ukraine, from September 6 Pikne stops in Moldova and sometimes also flies in Romania. From the end of September, (s)he will stop at the Danube plains in Romania for more than two weeks, and on 13 October (s)he will continue its migration to Africa. When it arrives in Africa on October 24, Pikne will disappear and all interim data will not be available until the beginning of June. Based on this, Pikne reached the wintering place in northern Ethiopia on October 31. The adventure there for a month, and then on December 1, it flew southeast to the eastern edge of the Rift Valley, where it spent the rest of the winter and spring. In May 24, Pikne left the wintering area and started migrating north. On June 1, more than seven months of data arrived in Israel.

Tracking of brood of Karula webcam nest is donated during several years by webcam watchers and forum members!

All the points indicated refer to the evening locations 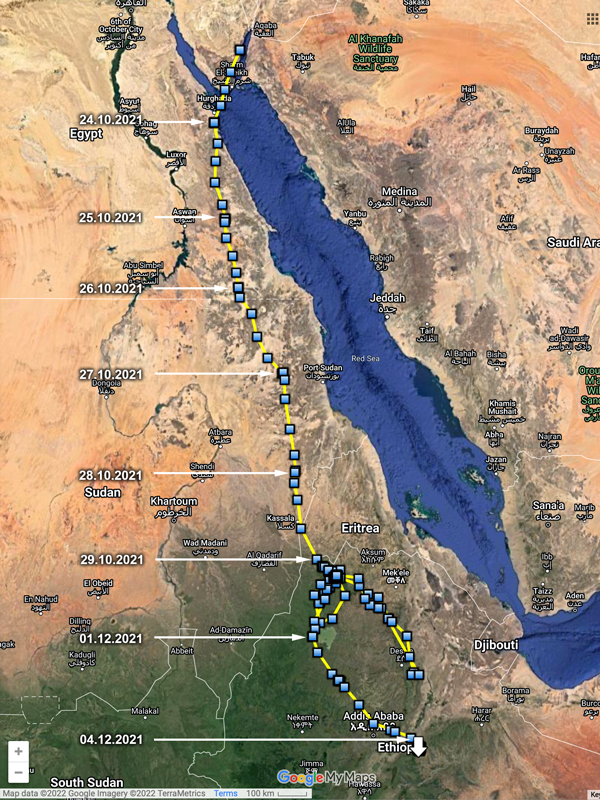 All the points indicated refer to the evening locations 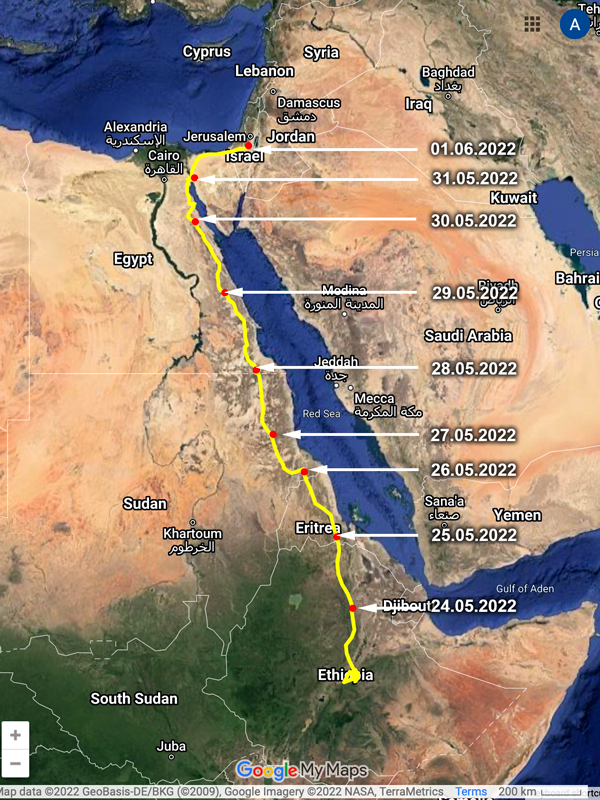 The first wintering area is located in Northern Etiopia, with its 'centre' being the village Adi Selam. Adi Selam is located in the region of Tigray. Tigray's capital Mekele is approximately 77 km away from Adi Selam (as the crow flies). It is predominantly an agricultural area, irrigated by the tributaries of the Tekeze River. Pikne will stay there from 29.10.2021 to 01.12.2021.

S/he reaches the second wintering area on 04.12.2021, southeast of Addis Abeba.
Pikne seems to find a really nice and suitable habitat between the villages Lik'i (situated in West Harerghe, Oromiya) and Hench'ar (situated in Arsi, Oromiya). 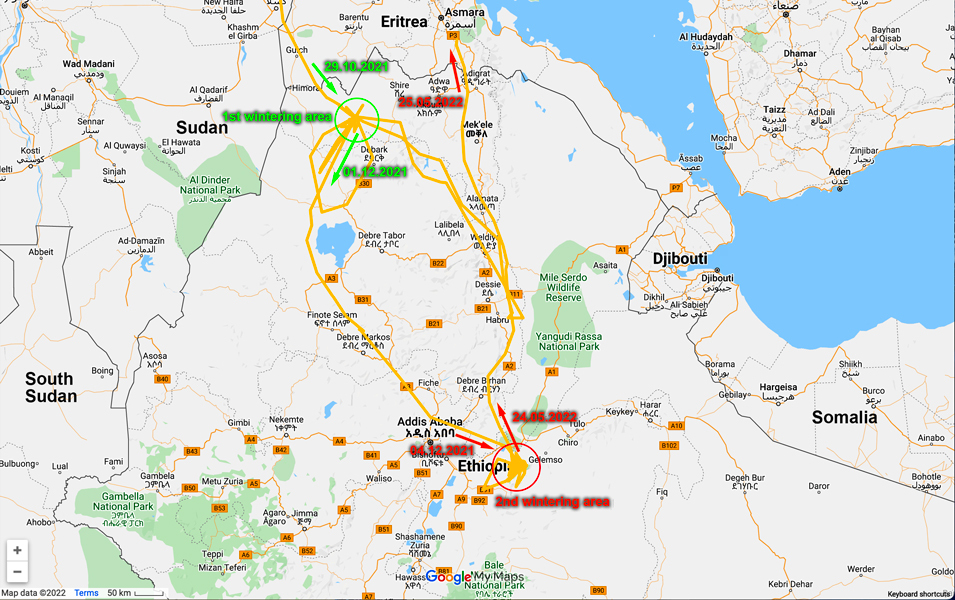 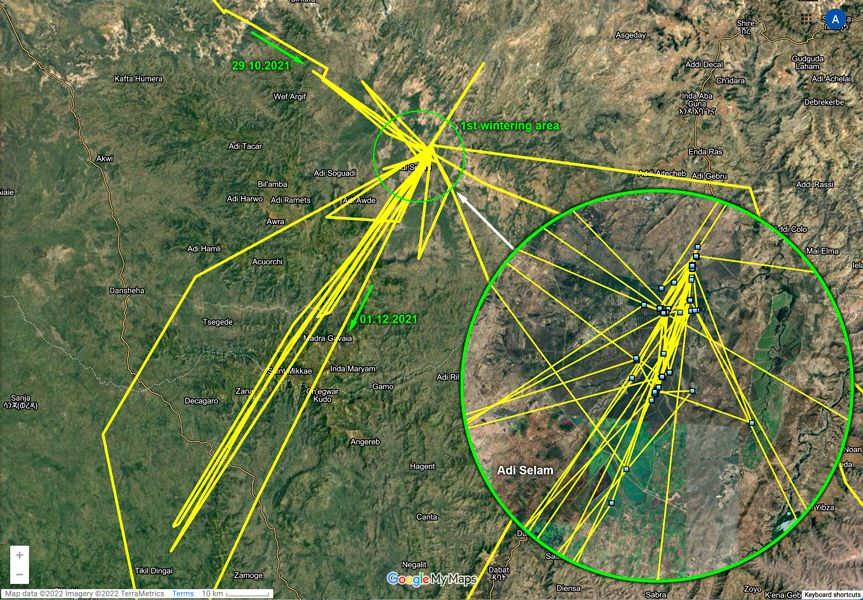 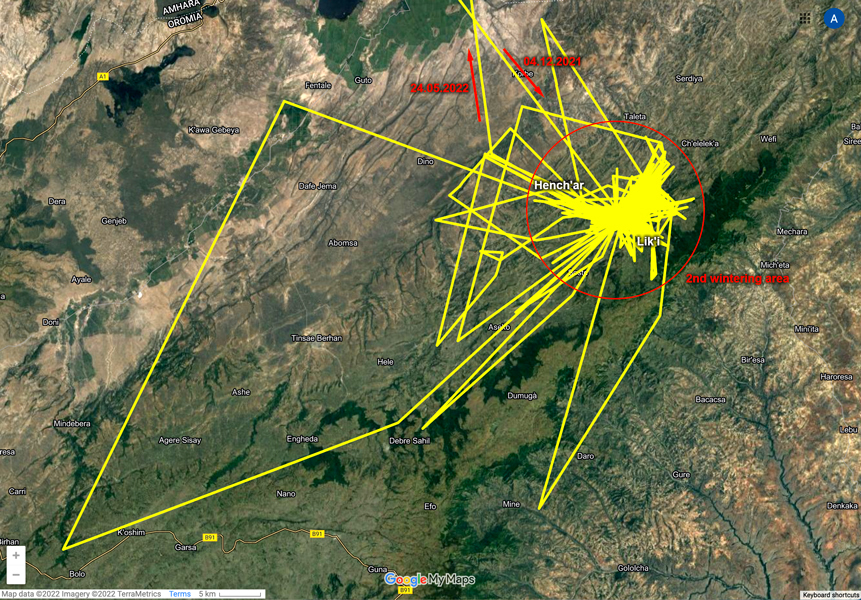 OMG, is that beautiful

That is great news!

A bit later as announced:

Today, Pikne flew from Mahane Yatir (in the Yatir Forest) in Israel to Syria.
Pikne is currently close to the border with Lebanon, west of Al Burayi, about 50 km south of Homs.

S/he started to travel at about 09:20 (UTC+3) at 38 km/h, had a break at the fishponds and the Jordan River near Neve Eitan, between about 13:40 and 14:15, next flew east of Lake Tiberias, north over Damascus in the direction of Homs.
It looks like Pikne is spending the night in the mountains east of Ras Baalbek (Lebanon), and west of Al Burayi (Syria)

Bureij (also spelled Burayj) is a village in central Syria, administratively part of the Homs Governorate, south of Homs. Nearby localities include Hisyah to the north, Sadad to the northeast and Qarah to the south. According to the Central Bureau of Statistics (CBS), Bureij had a population of 2,246 in the 2004 census. Its inhabitants are predominantly Sunni Muslims.
https://en.wikipedia.org/wiki/Bureij,_Syria 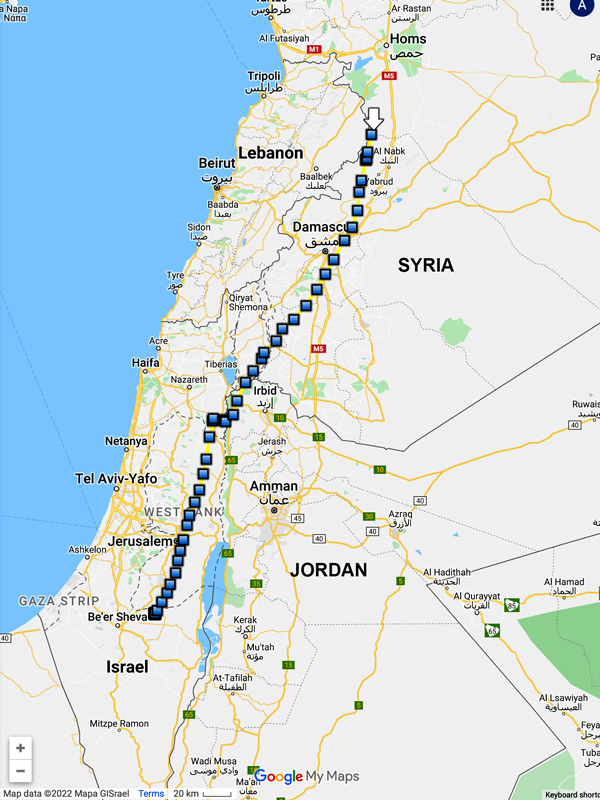 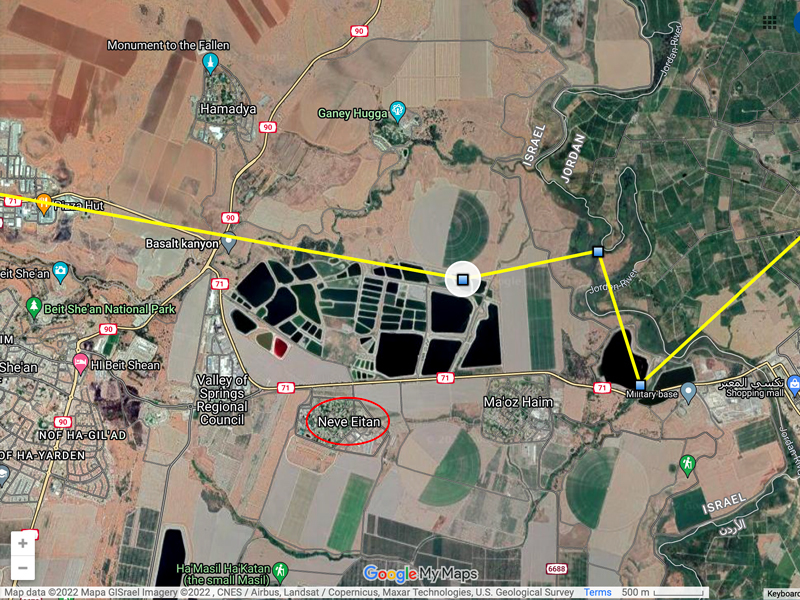 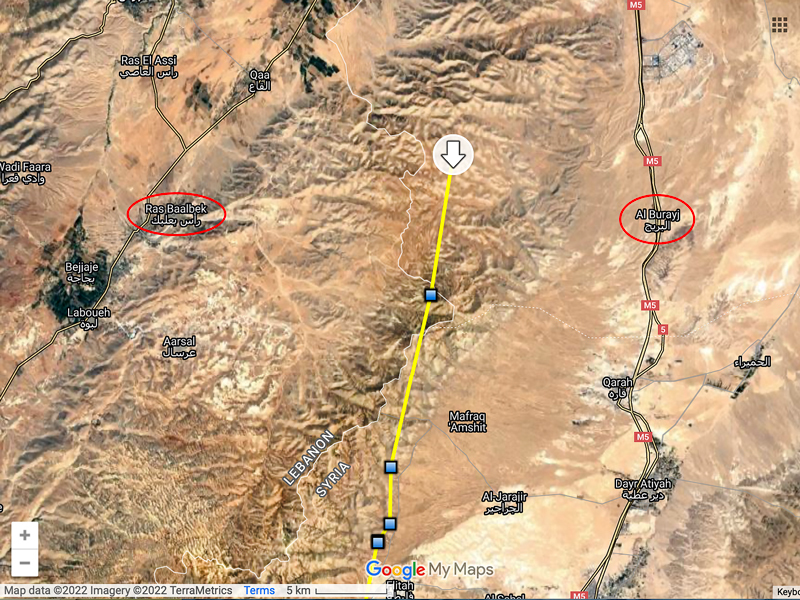 Hereby the birdmap update of Pikne's flight on 02.06 (already documented above). 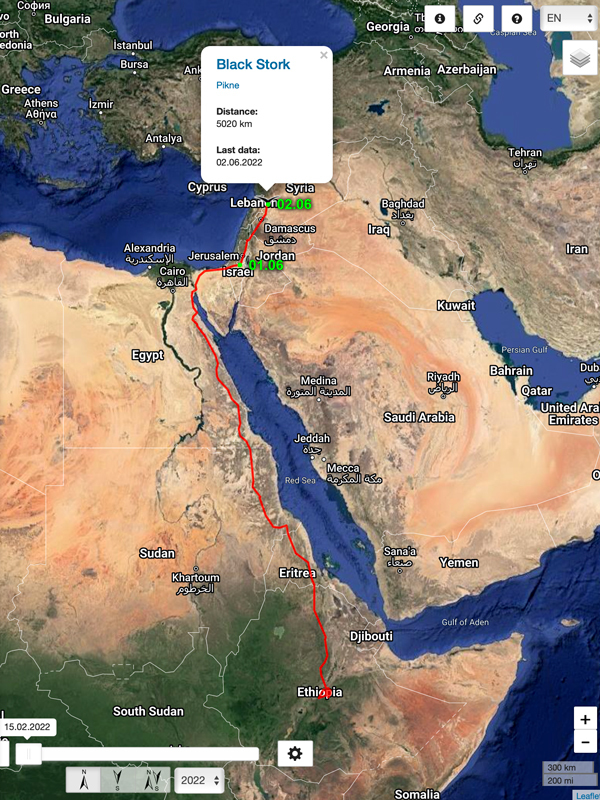 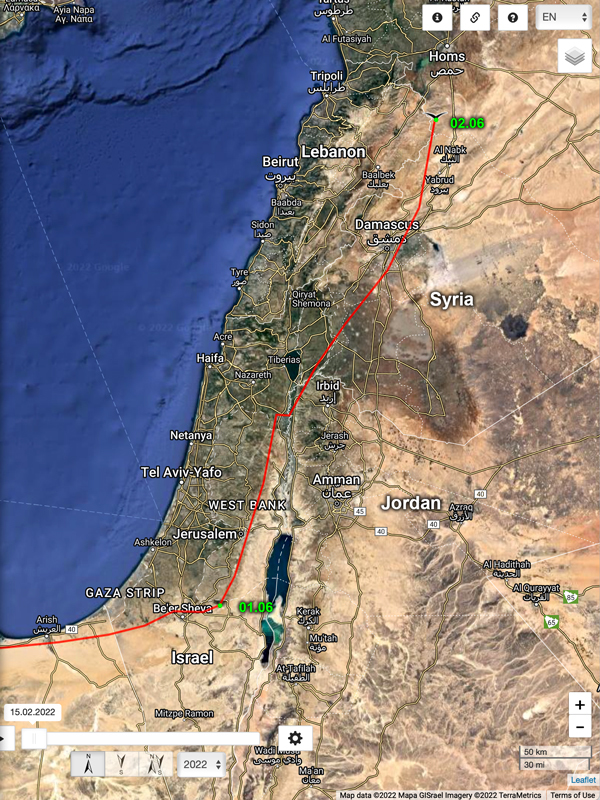 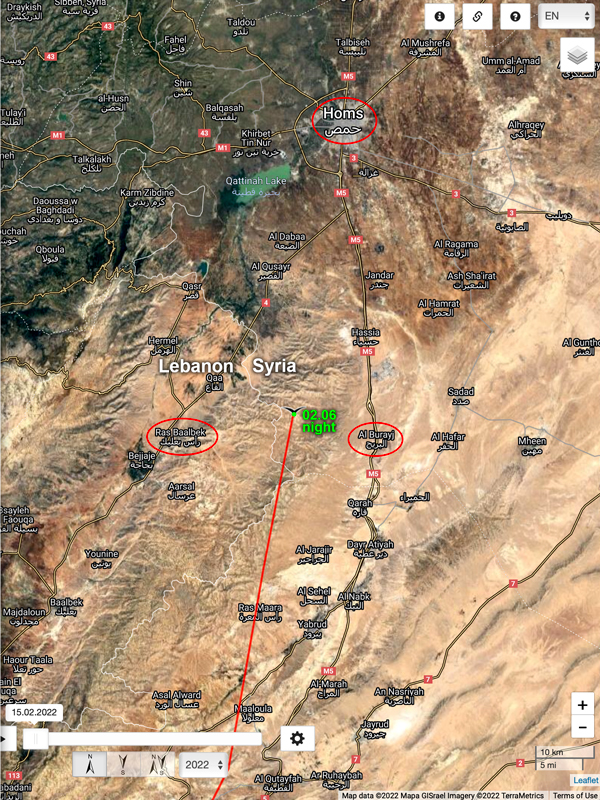 Pikne is currently in the fields of the Ghab plain, a little west of the village of Duqmaq in Syria. It is likely that she is searching for food in the irrigation (or drainage?) canals.

The Ghab Plain (literally: Forest Plain) is a fertile depression lying mainly in the Al-Suqaylabiyah District in northwest Syria. The Orontes River, flowing north, enters the Plain near Muhradah, around 25 km north-west of Hama.
The valley was flooded for centuries by the waters of the Orontes River, which rendered it a swamp. The "Ghab project", beginning in the 1950s, drained the valley to make it habitable, arable land, providing an extra 41,000 hectares of irrigated farmland.
The valley separates the al-Ansariyah mountains in the west from the Zawiyah mountain range and the plateau region to the east. It is 63 kilometres long and 12.1 kilometres wide.
https://en.wikipedia.org/wiki/Al-Ghab_Plain

Duqmaq (also spelled Dukmak or Doqmaq) is a Syrian village located in the Ziyarah Subdistrict of the al-Suqaylabiyah District in Hama Governorate. According to the Syria Central Bureau of Statistics (CBS), Duqmaq had a population of 1,042 in the 2004 census. Its inhabitants are predominantly Sunni Muslims.
https://en.wikipedia.org/wiki/Duqmaq 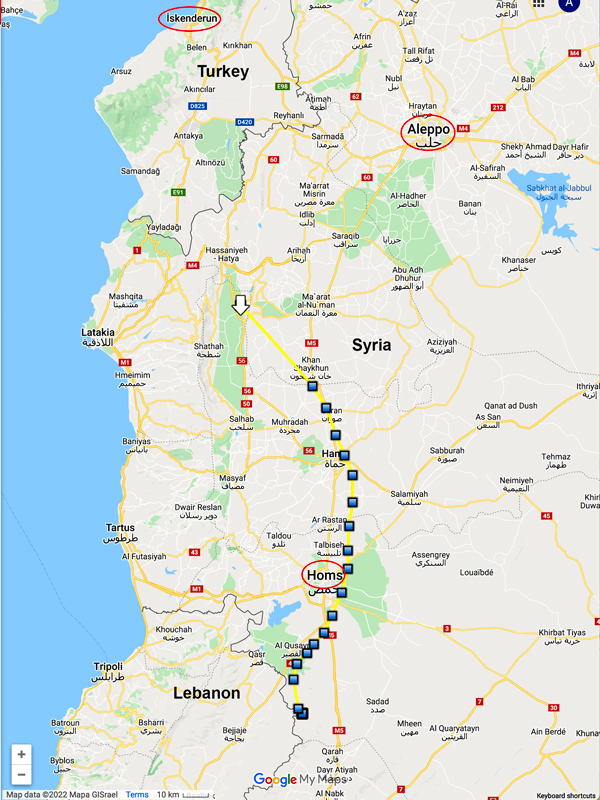 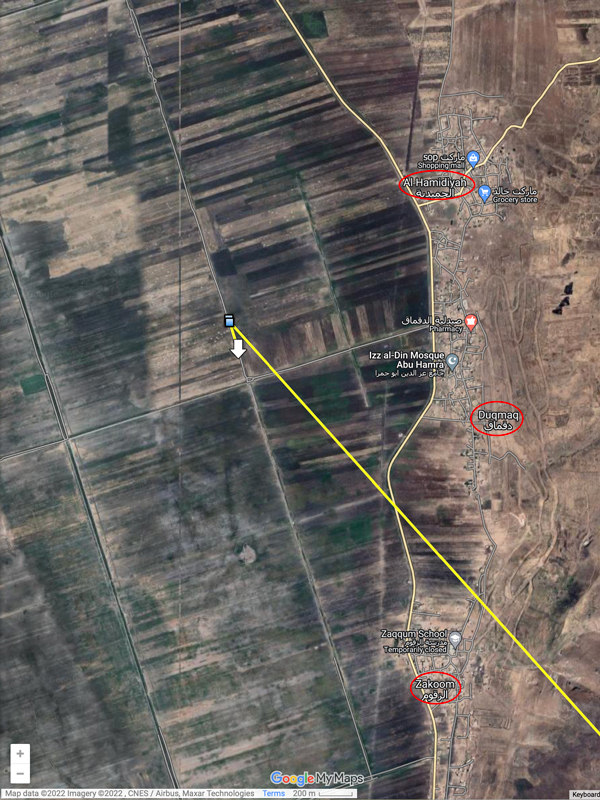 A view of his/her current area 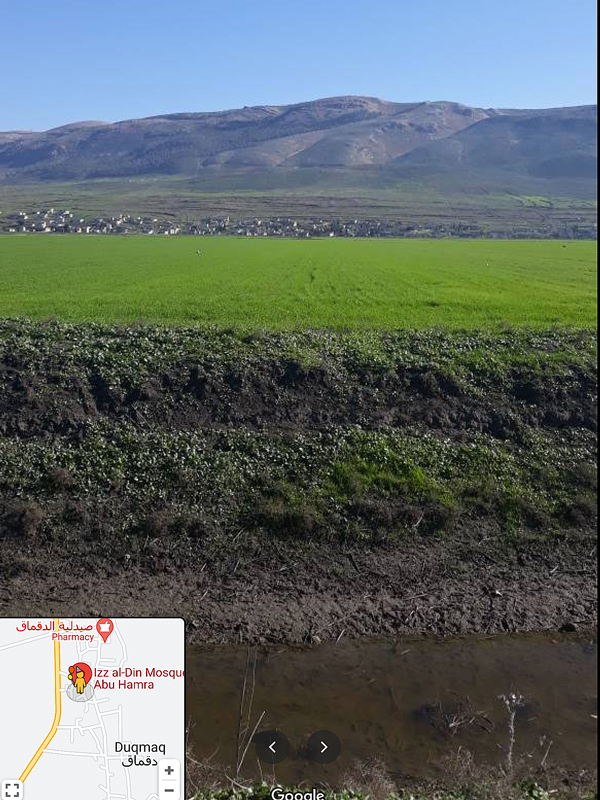 To Pikne: Joy, happiness and safe on his/her "exploration"-trip!
Top

Thanks for the tracker map, Jo

His/her last shown location is in the fields near the village Karacanlık, Reyhanlı district, Hatay province in Turkey. It is still near the country's border with Syria.

The climate is typical of the Mediterranean region, and Reyhanlı is an agricultural district watered from Reyhanlı reservoir, growing cotton, wheat and other grains and raising cattle, sheep and goats. 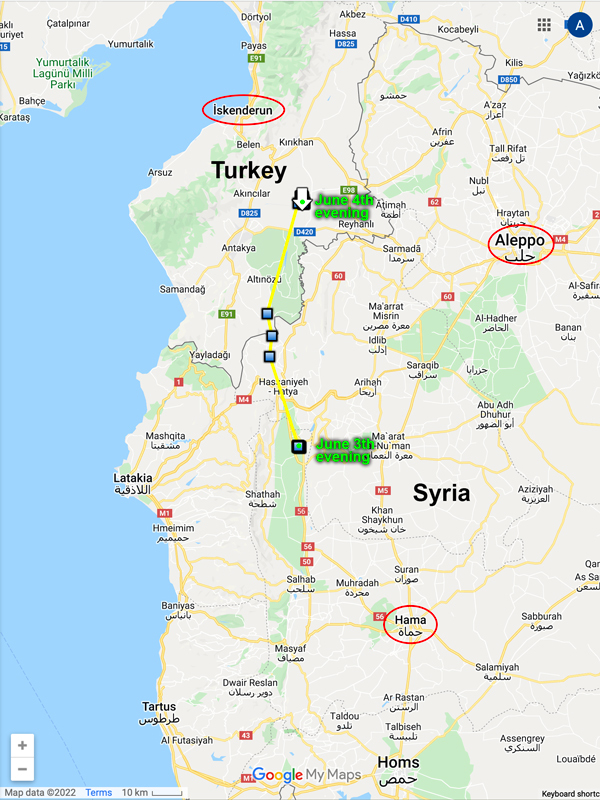 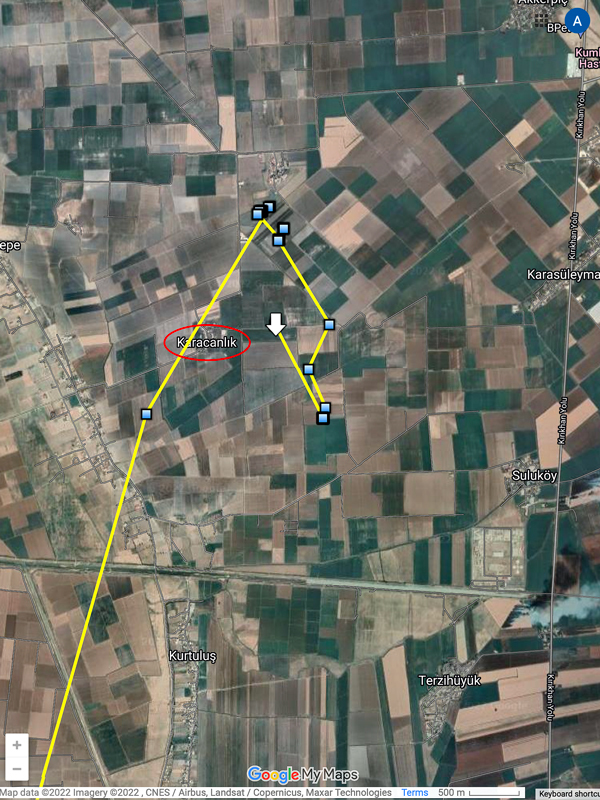 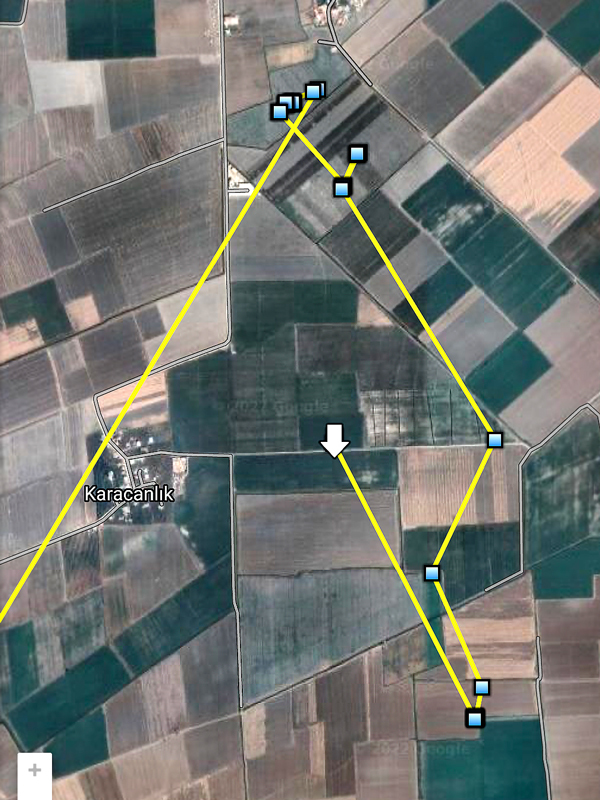 
BIRDMAP data:
PIKNE
Previous data
03.06.2022; Distance: 5187 km, +167 km in 1 day. Pikne sent data in the fields of the Ghab plain, near the village Duqmaq in Syria
New data
04.06.2022; Distance: to be completed as soon as we receive a birdmap update
“Clearly, animals know more than we think, and think a great deal more than we know.”
— Irene Pepperberg
Top

Udu spent the winter near the settlement Tiroungoulou in the Vakaga prefecture of the Central African Republic.
There is a wet tropical savanna climate. 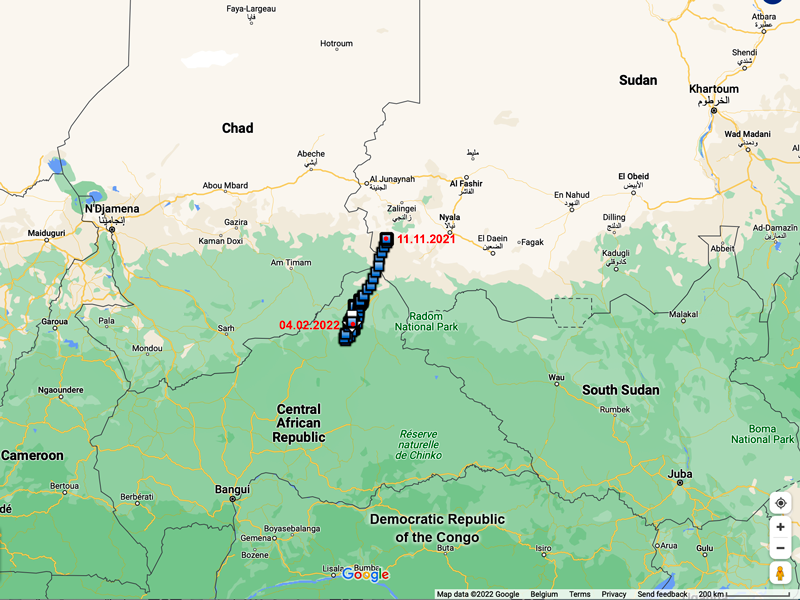 There are several National Parks in his/her wintering area.
Udu visited the St Floris National Park and is (or was) most of the time on the edge of the Ouandjia-Vakaga Faunal Reserve 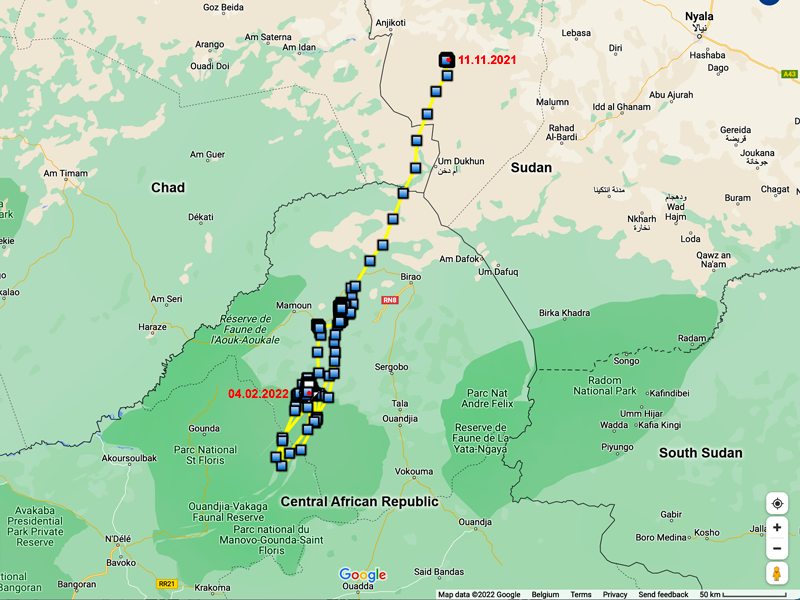 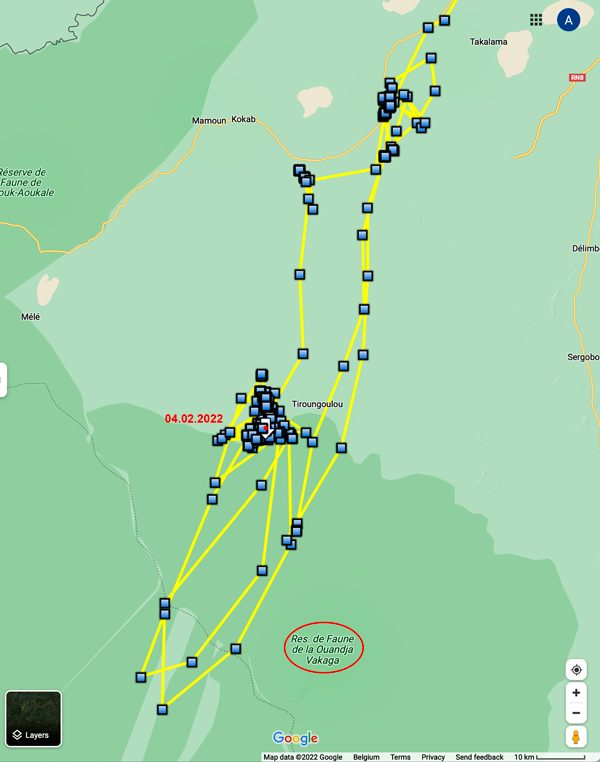 It looks like little Udu likes this place west of Tiroungoulou. 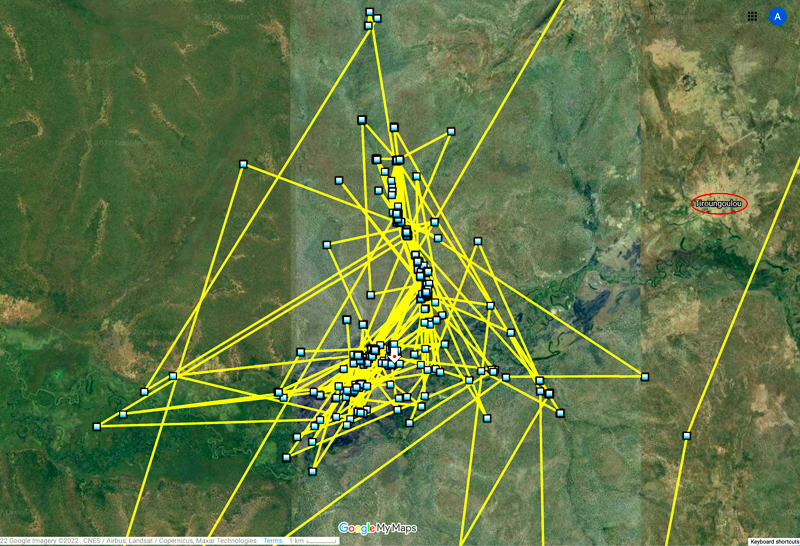 A Google Earth view (to the north) of that area 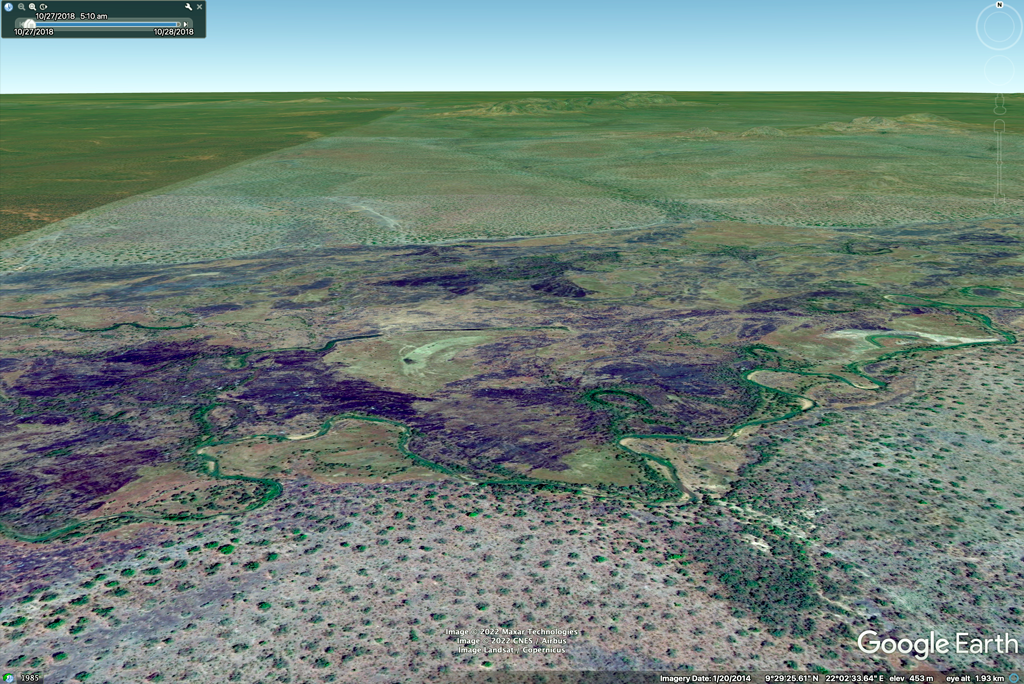 Manovo-Gounda St Floris National Park
The importance of this park derives from its wealth of flora and fauna. Its vast savannahs are home to a wide variety of species: black rhinoceroses, elephants, cheetahs, leopards, wild dogs, red-fronted gazelles and buffalo, while various types of waterfowl are to be found in the northern floodplains.
Manovo-Gounda St. Floris National Park is a national park and UNESCO World Heritage Site located in the Central African Republic prefecture Bamingui-Bangoran, near the Chad border. It was inscribed to the list of World Heritage Sites in 1988 as a result of the diversity of life present within it.
The park occupies most of the eastern end of Bamingui-Bangoran province in the north of the country. The park's northern boundary is the international border with Chad on the Aouk (Bahr) and Kameur Rivers. The eastern border is the Vakaga River, the western border is the Manovo River about 40 km east of N'Délé, and the southern border is the ridge of the Massif des Bongo. The Ndéle-Birao road runs through the park.

An aerial view of that huge area 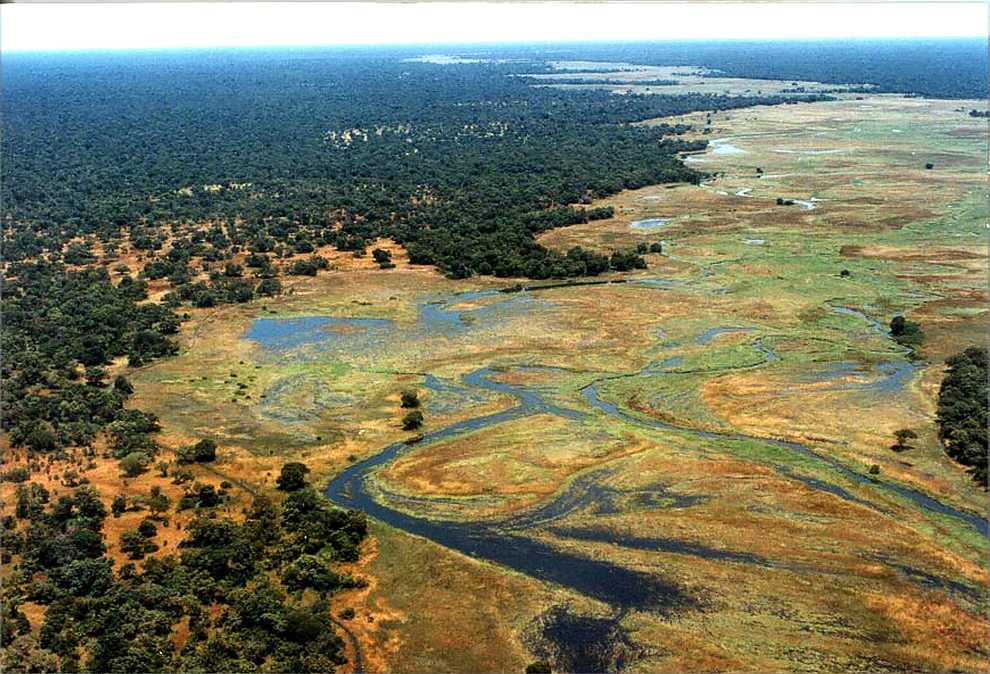 Very nice news! I looked at the map today and thought Pikne was also in Israel on June 3rd, is that correct?
Top

Sorry for my question, but it was answered a little higher in the post. I'm glad Udu and Pikne are doing well.
Top

Return to “Migration Maps and News”