Tawny Owls and all the others
Locked
2648 posts

22:12 the owlet is trying to eat, but he is too weak already to break anything apart except feathers
22:27 asking for food 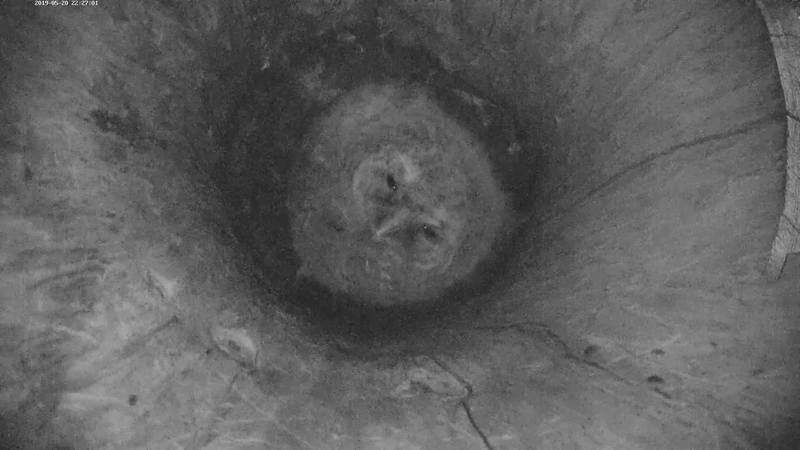 Big is working at getting food. I still see a lot of feathers but perhaps he will be able to get a bit of meat as well.

Hard things happen. On the Black Stork camera, we have seen parents killing babies. On the Osprey camera I recall a baby being blown out of the nest. We are all terribly sorry when these things happen but I don't know of any interventions that are ever done to rescue the birds.
Top

On the white stork camera I saw the parents throwing out the younger chicks and the guy who prepared the net, saved the little ones and grew them up! The one who saves one life, saves the world entire.
Top

But by the morning it could be too late. (((
Top

...."t is fascinating to observe what happens in nature but we must be aware of the fact that a merciless fight for survival goes on there. The emotional part is sometimes appalling but this is more due to human views, morals and ethics – nature acts rationally "
Top

Thanks Laemmergeier.
from the same article:
"There was some hope that one of the adults would bring some food during the night to the chicks left in the nest and so it probably happened too. But to the sorrow of us all it happened too late for the smallest chick …"
Who wrote this??? This is a BS. There was NOT enough food for DAYS! Not enough food to be able to jump into the window. Big was trying to jump to the window yesterday but couldn't make it. And didn't even try after that, he just wanted to eat! And he was able to do that before. I was watching all the nights for food delivery, I know what was happening, it was all documented!

And what are they going to write after the same happens to Big??? Same BS? There is food in the box, but he is not able to eat it, too young for it, needs to be fed! Looks like nobody even cares to find out what is happening! Looks like we are the only people who know what is happening. They took a pic from the forum, but didn't even care to read when was the last food delivery! And we are mostly trying to document that along with other things!
I've been already crying for days watching foodless nights! It was not possible to watch it for a long time already!
Top

00:00 the owlet is weak and making weak hungry sounds 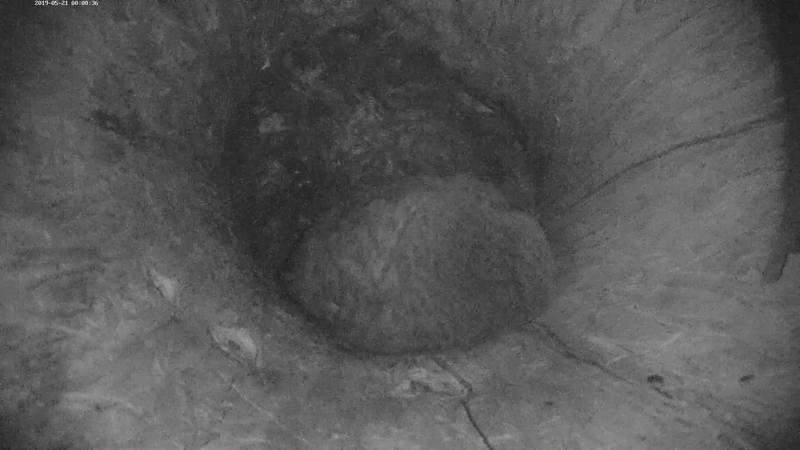 Everyone is looking here voluntarily and we should be grateful that we have the opportunity to do so at all !!!
Top

urmas-bashing???
where did you see it???
Top

Honestly I doubt an intervention could save Big at this point anyway. Going without food for so long also means Big is dehydrated, and organs shut down when dehydration occurs. I am very sorry about all this and hope it ends soon for Big.

If the parents have abandoned the nest will they even feed the one that has fledged? It seems like an unmitigated disaster for the nest this year.
Ugh.
Top

Hyacinth wrote: ↑May 21st, 2019, 12:32 am Honestly I doubt an intervention could save Big at this point anyway. Going without food for so long also means Big is dehydrated, and organs shut down when dehydration occurs.

Hyacinth wrote: ↑May 21st, 2019, 12:32 amIf the parents have abandoned the nest will they even feed the one that has fledged?

The parents are not around and nobody knows what happened to them.(((
Top

1:06 Big is weak and is making sharp hungry sounds in the same position. He hasn't been moving around for about 2,5 hours.
1:48 it looks and sounds about the same, looks like he is sleeping
1:49 Big is trying to eat from there he is, lift his head, he has some feathers
making a very sharp sounds (the sharper sounds are the worse situation is)
and trying to have a bite again, more very sharp hungry sounds
1:59 Big calls a lot, now he is awake, but looks the same, just sounds more intentional
2:07 keeps calling often and loud, but with the head still down
2:11 lifts the head a bit and keeps calling 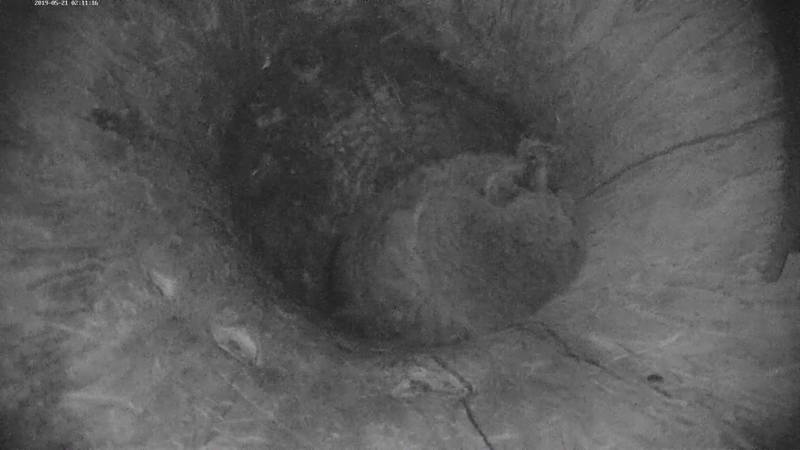 2:37 keeps calling
3:06 sounds like he is sleeping again or just getting weaker, impossible to say, the head is down
Top

Oh no, this is not what we hoped or expected or feared for this season, thought we would have gone through all hard times already in previous years.

I can understand all your tears and sadness and frustration, having the part of an observer "only".

Several (or even many?) of you observe also other webcam nests, in other countries or even on other continents. You will know that those who run the cams do this with different policies.
There are those who will intervene in nest life when they think it is appropriate and those who won´t intervene at all.
Please respect them all, as each one of them has surely good reasons to act like they do.

And please, before you continue to write harsh words and phrases and judge over others, mind whether you would like to read such words in the world wide web about yourself.

And before times watching this cam are getting too hard for any you, give yourself the mercy to stop watching. Everybody has the free will to watch the cam or not, is forum member by free will and can participate in the topics by free will. No one is forced to do anything.

Despite all the unhappiness I wish you all a "Good night - sleep well" and I am sure we all are united in hope for a miracle ....
Nature does nothing in vain (Aristoteles)
Top

Hyacinth wrote: ↑May 21st, 2019, 12:32 am Honestly I doubt an intervention could save Big at this point anyway. Going without food for so long also means Big is dehydrated, and organs shut down when dehydration occurs. I am very sorry about all this and hope it ends soon for Big.

If the parents have abandoned the nest will they even feed the one that has fledged? It seems like an unmitigated disaster for the nest this year.
Ugh.

I suppose several scenarios are possible and we can only speculate as we don´t know what is going on outside the nest box.

In case parents are doing well and there is a lack of food they may decide that it is most promising to feed only the owlet which has already made it out of the box, the strongest one. Survival of the strongest.
And that the remaining owlet has only a chance to survive when it manages to get out of the box, parent birds want it to get out by putting it "on diet" in the box.

Another possibilty is that one of the parent birds has become victim of a predator (e.g. Eagle Owl as night active predator, Goshawk as a day active) and the surviving one is only able to feed the owlet outside (if it will continue at all).

These are only few scenarios and I am sure that there are even more thinkable possibilities ...
Nature does nothing in vain (Aristoteles)
Top

3:26 the owlet looks about the same, but make calls less often
3:34 he looks around and calls more often 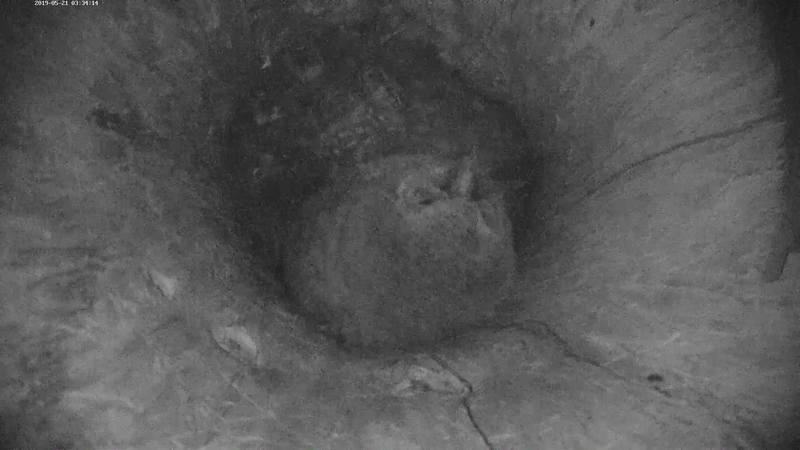 then he moves to the left and keeps calling
3:39 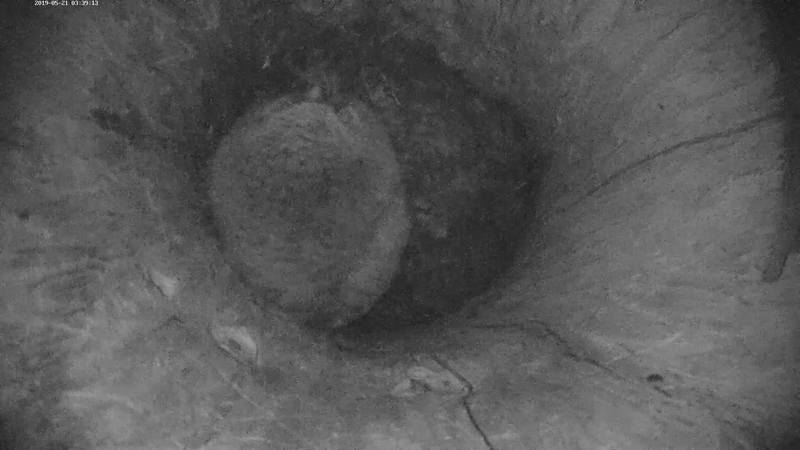 Thank you, Bea. Not knowing, we can hope for the best for the parents and the fledgling.
Top

4:27 restless, moves to another side of the nest and keeps calling 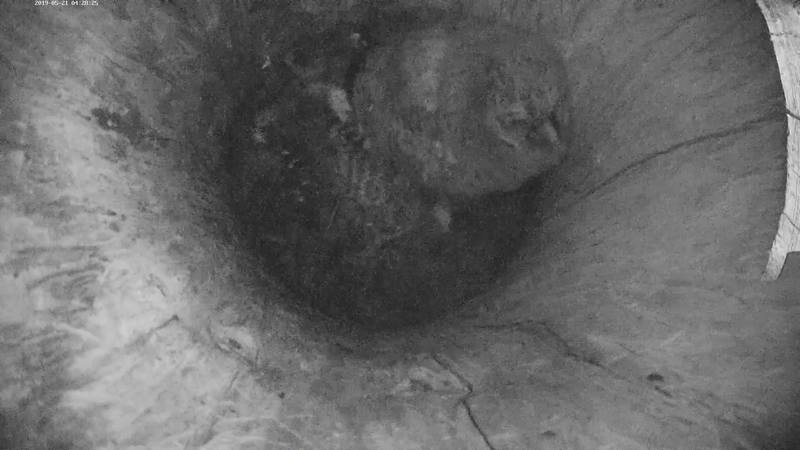 4:29 and moves again to the bottom
It's morning already and nobody came and I didn't even expect it anymore.(((
4:56 restless, moving around a bit, calling 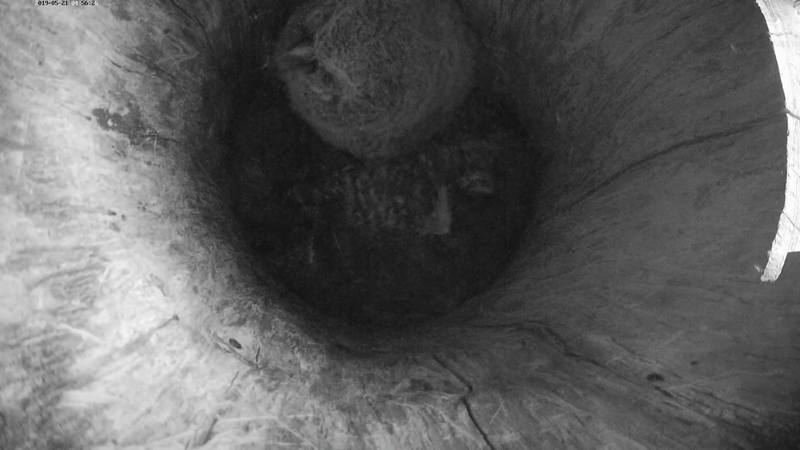 5:33 a crow comes very close to the window, he doesn't react much 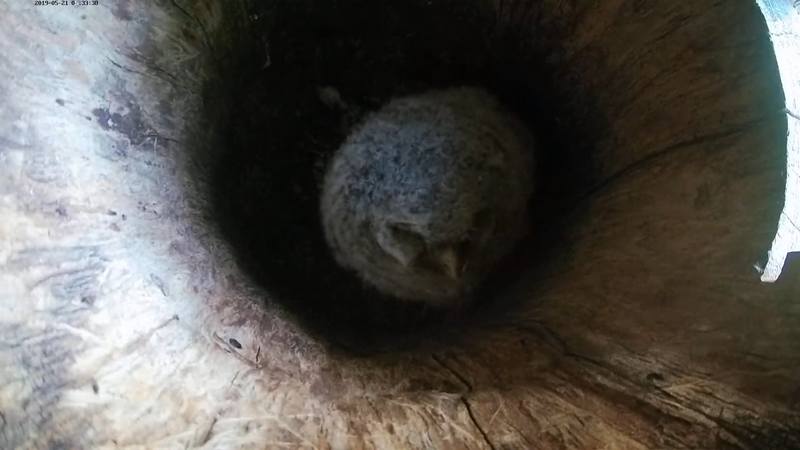 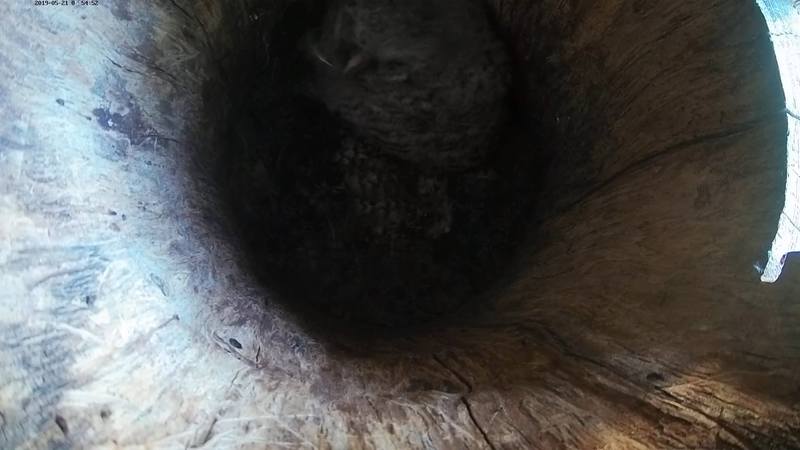 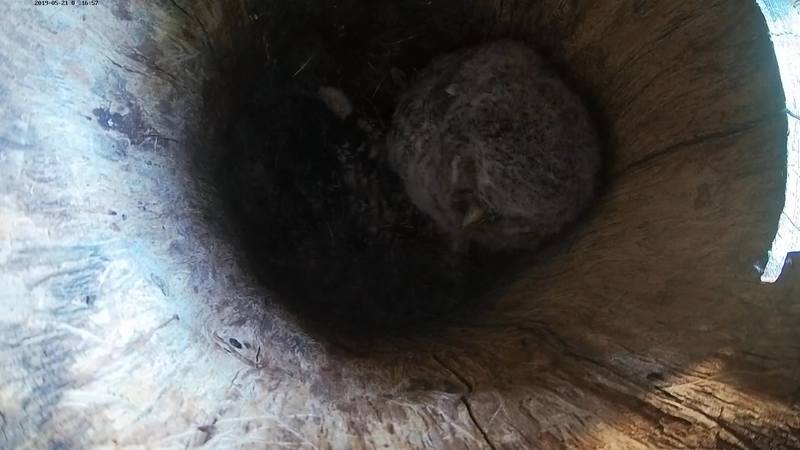 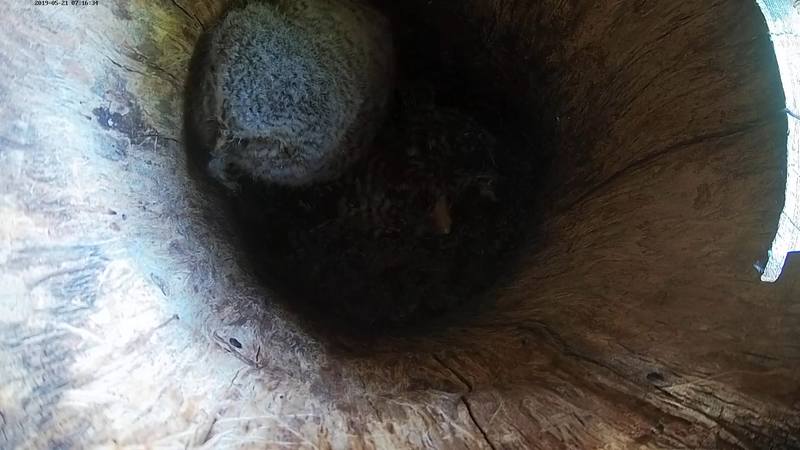