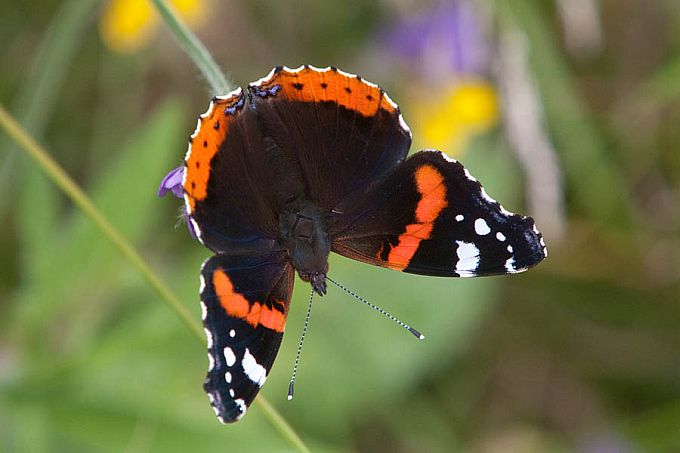 Yesterday afternoon when male Karl was still there, the stork nest was visited by an admiral; this butterfly is already one of the generation born here.

Migrant butterflies usually arrive in in May or June.

If everything works out well another butterfly of the opposite sex who has arrived too is found and after this the female lays the eggs, as the Aglais butterflies do, on common nettles or small nettles (according to literature possibly also other plants).

The female fastens the eggs one by one and they may be up to a hundred. In a week the caterpillars hatch and are busy only with intense feeding for two-three weeks. After this they roll up into a leaf and pupate.

What then will happen in September? Using favourable winds, the adults, or imagos, of the new generation try to migrate towards south to reach South Europe or even for wintering. During the coming winter and spring several new generations of imagos grow up in the warm climate.

In the distance that an admiral may cover in an hour was studied – slightly more than in daylight; thus we have not to do with particularly fast fliers.

Despite this, the admirals are remarkable travellers.