Fattening up time for brown bears 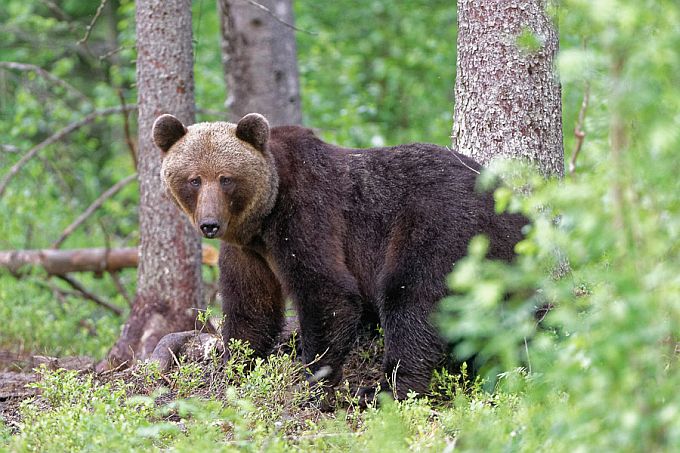 Unharvested oat fields are still to be seen along road verges, and hunters have set up fields for foraging that will not be harvested at all. The fattening-up period of brown bears lasts; but what is eaten and where?

Adult males move on their own. Young animals, over a year and a half old, are the ones that are most frequently encountered and with whom mischief is associated because they started their independent life in late spring and all risks in the surroundings are not familiar to them: they move around, check up things and do ”silly things” that may even cost their life. A reminder – bear hunting started on August 1st and animals are cautious.

Those born at the beginning of the new year are minded by their mothers and the mothers go wintering together with their young.

But let us have a look at when and with what they fatten up? On average the home territory of a female is about 30 km2 (of course depending on the kind of forest); for mature male bears it is larger. During the fattening up period bears stay for the day in copses near the oat fields, adults go out to feed when darkness falls but young impatient creatures can be seen already in early evening. In the ”home territory” they keep busy until the end of the grain harvest in order to use the carbohydrate-rich food of grains and their green parts. Bears of course do damage by trampling oat fields but in general this is modest.

Bears know the apple orchards of old farmsteads in their territory where there often also are plum or damson copses. Those they head for when apples ripen but this year ripe fruits will be late.

In researchers have observed the activities of brown bears in abandoned orchards for many years. A full-grown brown bear needs about 20 000 kilocalories per day during that period. About 400 ripe apples provide this amount of calories and the weight of the bear increases by roughly in a 24-hour period. They stay near the apple orchards for as long as ripe apples remain or someone disturbs them.

In the forests lingonberries are ripening; there is still nothing for bears in the cranberry bogs; they look for hazelnuts. This then is about 90% of the vegetarian menu, the remainder is carrion meat found in the forests (partly leftovers from hunters). The elk-hunting season starts in mid-September and a bear does not go far from an elk carrion during its fattening period. Slaying of a domestic animal may occur too, one that has been left out for the night or broken out from an enclosure. Bears eat carrion willingly but already since years our cattle-owners are obliged to take their dead animals to an animal carcass disposal centre. Ant nests, torn down in order to get at the protein-rich food, will rather be found in early spring or summer, after the heat period.

Bears will not as a rule damage the ensilage balls visible everywhere in the fields, silage does not belong on their food list. But they check the salt licks of local hunters and the feeding areas.

Looting of bee hives varies: adult bears are shy of humans and generally do not press into apiaries near residences (young bravos of course make mischief); mobile hives during heather honey collection can for instance be enclosed with proper electric fencing that keeps bears away quite well.

Towards the end of October the bears remain longer in their core areas where they winter. There will be cause to write about their doings again then.