As the viewers of the nest life of the black storks already know, nesting results differed in the two nests observed. In , in the nest that until now had bred chicks successfully, the nesting did not succeed. Maybe the female that was briefly in place was not the same who nested there earlier, and a breeding pair did not develop with the male that arrived later. So we could see how a single male bird built a nest and visited it regularly. As our Latvian colleague Maris Strazds writes, many females visited the nest but none stayed. They may have been migrating individuals (from ?) passing through who made a brief stop in their migration at this nest. Some of them evidently also arrived too late for breeding. Once three storks were in the nest at the same time.

Our black stork pair in the , Karl and Kati, in contrast bred successfully this year, it can even be said very successfully. While two chicks were raised last year then this year three young storks fledged. 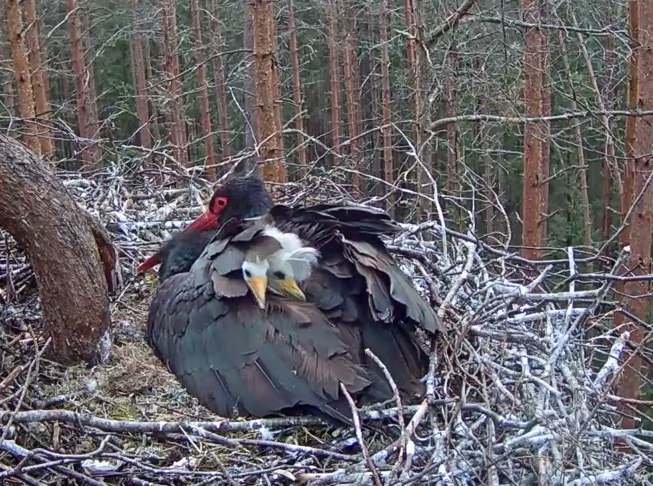 All seemed quite close to the ideal – the adults were back early enough from their migration, the time between their arrivals was not too long, there were no serious rows. Kati laid 4 eggs, chicks were hatched from all, the adults removed one chick, to give the others better survival chances, there was sufficient food despite the dry year (or thanks to it?), all three chicks grew up, practiced flying several times but returned to the nest where they were fed. In between they were harassed by a goshawk but the adults guarded their chicks and so all stayed alive. Finally all went on migration. The chronicle of all important events in the nest is in the forum. But we don’t know what happened then outside camera view. The odds for the Karula nest chicks to survive are quite good. Viewers all over the world of the black stork nest have even started a fund collection, in order to be able to follow the young birds that grow up next year in this nest even after they leave it. Thus a start has been made for acquiring transmitters, and a little less than half the required amount is already collected, i e one GPS device can certainly be bought already. But the collected amount will be used only when the whole sum is there on the scheduled date. Otherwise the collected means will be returned to the donors. Sorry, I was wrong about last fact... As Jo informed - The rule that funds will be returned to donors IF the target amount is not reached applies to other fund raising sites.  We chose Leetchi because it does not have such restrictive rules.  All funds collected will be available for the purchase of transmitters.  Leetchi says that the target amount - in our case 3000 euros - should be thought of as a suggestion, not a firm rule.  So what we have, we keep! Thank you, Jo!

One more aspect of why the breeding season this year was successful in the nest of Kati and Karl – all the chicks were females! It is known that females are scarce in the population here. Many thanks to Katrin who took the time despite her tight schedule and determined the gender of the chicks from the DNA extracted from the feathers of the chicks!

Male Karl can be traced on the migration map thanks to his backpack. He makes a migration stopover in and there local ornithologist also have photographed him . The tracking devices planned for the chicks next year are already significantly smaller - technology advances.

Many thanks to all partners in the enterprise, to the helpers and supporters, and to the viewers and forum participants! We will continue next year!