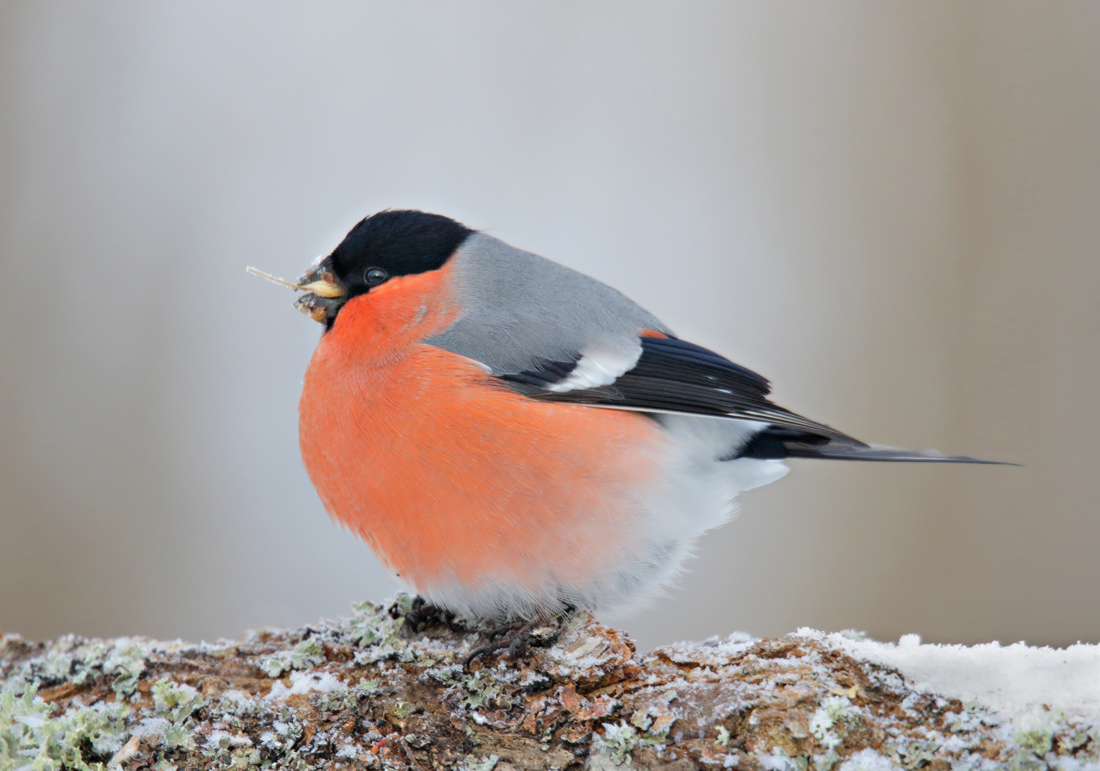 December, the darkest time of the year. A couple of degrees of frost, a slight rime on the ground. Morning coffee  in lamplight, time to take care of the stomachs of the winged friends. First sunflower seeds from the cupboard in the hall. then a handful of grain from the bin. To that a couple of rowanberry clusters should be added to the table, picked in autumn and put in the old barn beside the firewood to dry. Opening the door of the cattle barn I freeze into standstill – a berry cluster suddenly rises into flight and lands on the wood pile. In a few moments my eyes become used to the dusk – a bullfinch! How did it get inside? There is a cat flap in the door, by that tits visit the stable but that such a prudent bird …

Anyway the bullfinch is in the stable and has no hurry at all to fly out of the opened door, only sets its mouth wide  open  in order to scare. I cannot resist the temptation, I step quietly closer, stretch my hand out slowly... caught! The bird stays calm even now, only pecks a couple of times lightly against my fingers with its beak. What to do with him? Photographing is out, photos with a human holding a bird in the hand are somehow never acceptable to me. Nothing else then but that I step outside and open my hand. The bullfinch flies towards the forest but leaves two black tail feathers as a memory.

It might be believed that this experience would been have been enough for it and that we would not meet any more. But the next  morning I found the bullfinch again in the barn. And on cereal the one after that. That he left his worked-through berries on the fresh ones I did not like, however. I nailed a piece of plywood over the cat flap; the bullfinch I started to call Halftail. The missing tail feathers allowed him to be easily recognized among the others.

The taste of berries was in Halftail’s mouth and from that time on he became a permanent customer at the birdfeeder. He was not particularly shy of the food-bringer, only flew to the top of the apple tree and let hear his melancholy whistling from there. Sometimes I whistle in reply and so we hold a dialogue. He understands what the talk is about, I …well. 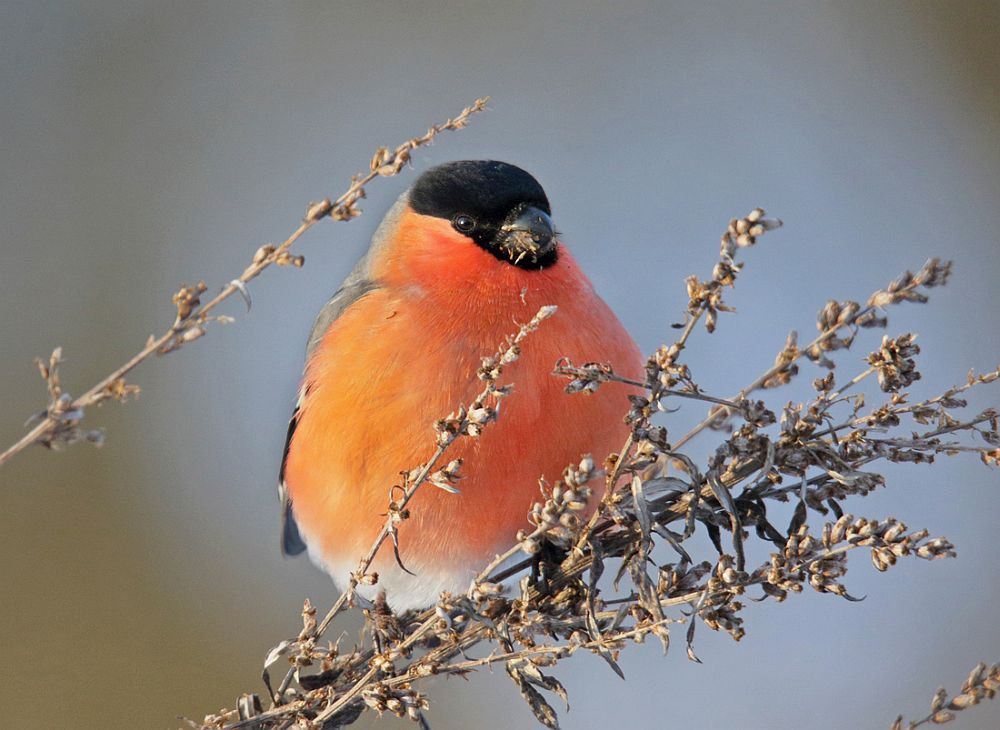 Halftail on a mugwort stem

Different from his cospecifics Halftail seems to have a loner’s personality. Even when he eats together with a couple of other bullfinches he keeps to himself. He does not bother much with the other birds. If the rowanberries run out he flies to the mugwort stand behind the fence and picks seeds from there. He even learnt to eat grains from the birdfeeder beside the yellowhammers. To start with, the grain went back and forth in the beak but the industrious learner soon became a master. 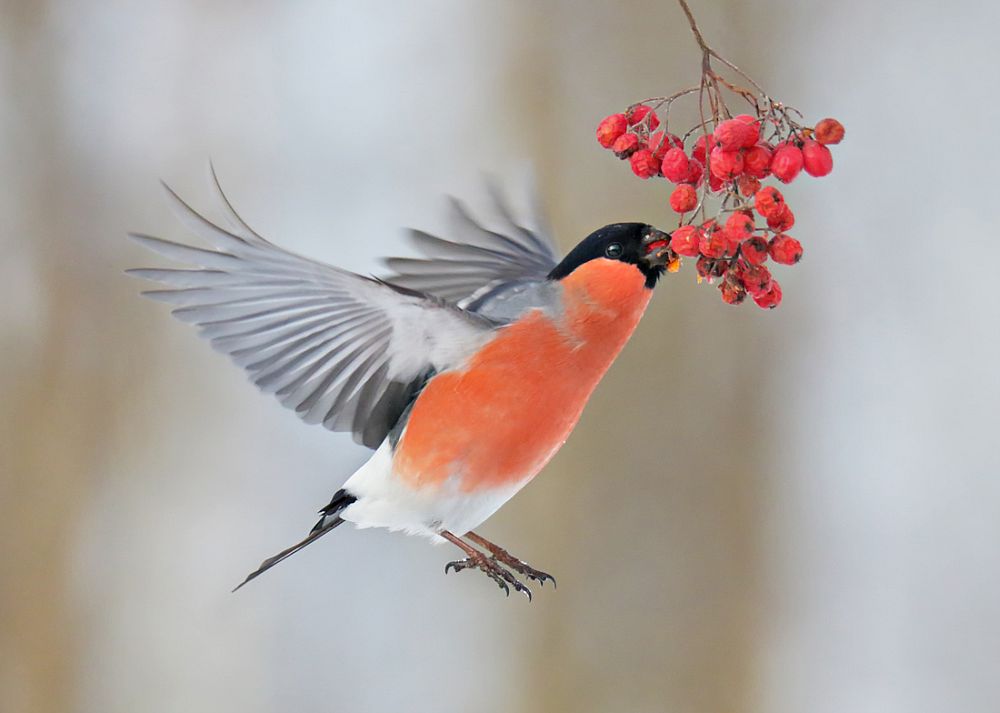 Despite its phlegmatic character the bullfinch has enough mettle. If I set the berry cluster so that he does not reach to grab it from the branch he shows his skill and picks the berries one by one in flight. Of course I had to photograph it although light is scarce. But March with its spring-winter sunshine is still to come...

Such is Halftail’s winter tale that still continues for now. Not for long because the sun goes ever higher and soon the time for getting a mate and making a nest will arrive for him. For me several tens of takes will be  left in the photo archive  as a memory, for him several nice stomach fills. – so we both should be happy. Good luck with a fiancée, Halftail!

Maybe we will meet again next winter.