Looduskalender in Vikerraadio: Chicory is blooming 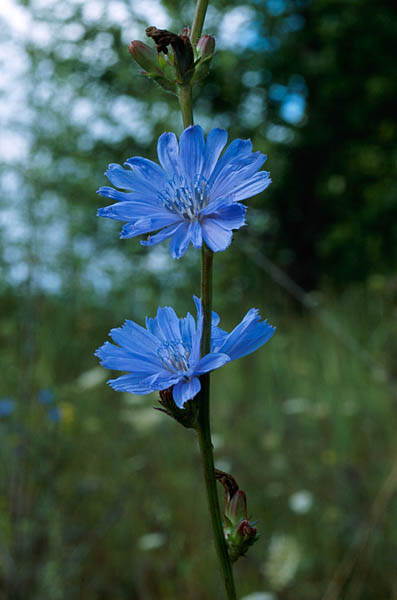 Old people used to say, that if the first week of August is hot, we will have a long and cold winter and the snow will stay long in the spring.

Today’s weather people have so far been a bit shocked by their own summer forecasts and don’t even dare to predict so far ahead.

It feels, as if the whole nature is padding itself with cotton wool. The woolly tips of the thistles are big and soft and the seed pods of the willow herb look like downy mountains. The ground looks like it was covered in fog, it is so dry. There has been no rain for three months is some parts of Estonia and digging down as deep as you manage, it is still as dry as ashes.

But in the nature’s enchanted garden we can still find flowering beauty.

One of my favourites, chicory, is blooming with its mild blue skirt. And despite that it’s supposed to be a foreign species, for me it’s the most important plant in the heart of the summer. It blooms just while we have a true Mediterranean climate in Estonia.

You know chicory, don’t you? The plant with the lovely light blue flowers that you mostly find by wheat fields or on roadsides. Its flowers look as if children had glued them together of strips of blue paper, about a centimetre long tung-like strips forming a floret. These are attached along the tips of long, segmentary stalks.

But for us people, the most important part is its root. It found its way to Estonia just because of that root. It can be used as a medicinal herb to cure the loss of appetite or some digestive troubles, but its main reason for being is as a substitute for coffee.

A while ago its cultivation by Lake Peipus was as profitable as the growing of onions. The different sorts of chicory were grown in high beds. And in the village there was usually a horse brave enough to drive into the lake with a cartload of chicory, where it got rinsed of the earth clinging to its roots. Chicory was dried in the same ovens that were used to dry the Peipus smelts, and those ovens were brimful every fall.

However, it’s not advisable to start brewing coffee from the chicory roots found by the roadside, as nowadays we have much better chicory products. But its flowers still look very lovely in a vase and it’s fun to get the children to paint them.