Looduskalender in Vikerraadio: Eurasian jay with an acorn 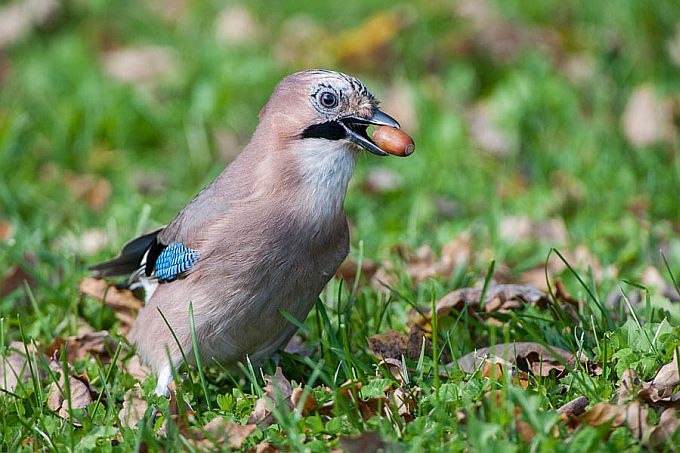 Have you noticed, how many acorns we have this year? A good year for acorns was supposed to mean a winter with lots of snow.

Because of the dry weather the acorns started falling down as early as at the end of July. But you cannot carry such an acorn around in your pocket for long, as its shell has not yet hardened and will turn black very quickly, and the acorn itself will wither. It’s still too early to collect them; the same goes for hazelnuts  —  they still taste like hay right now.

Nevertheless, we have many searchers for acorns. First of all the Eurasian jays, who carry them off shouting with joy. And although the Estonian name for those jays (pasknäär) does not have a nice sound, the bird itself is very pretty.

Try to observe it sometimes by some oak tree. It looks particularly beautiful in the evening sun, when its somewhat reddish plumage will sparkle even more brightly. And its wing feathers have a particular meaning for Estonians, as they carry the colours of our national flag  -

I have sometimes thought, that if the choice of a national bird would have been made with the idea to free Estonia, maybe the Eurasian jay would have been named as our national bird, just because of those wing feathers. (Estonia’s national bird, chosen during the Soviet occupation in 1962, is the barn swallow. M.) Many people have such a feather, that they happened to find in an anthill, stuck in a book as a bookmark, or even placed on a shelf with other sacred memorabilia.

Why an anthill? The Eurasian jays, like all proper crows, like to rid themselves of parasites and if this happens at the time when they are shedding their old feathers, they may lose some of them in the anthill.

The Eurasian jay is a poor traveller, just like all its kin  -  all the crow-like characters. But it’s our only crow, who will secure a proper food supply for winter. Hidden in a secret place, its stock of acorns can amount to several kilograms.