In March, before installing the web camera in the nest, we waited impatiently for the start of male bird Karl’s migration. Karl did have a tracking device but the lack of GSM cover in southern kept us in the dark during four months, from mid-November 2018 when Karl reached his wintering site. However, on March 16 during the spring migration Karl’s locations were registered and all seemed to be in order. We had nearly two weeks of time to install the camera at the nest. The nest could be seen in the web camera from March 24 onwards.

On March 29  the migration of male Karl  was interrupted in . Since Karl did not return to his nest he very probably was killed. There are reports that birds flying with SIM cards and passing are hunted there with the pretext of national security  (evidently they are also used in spying drones). Karl’s tracking device used a GSM network SIM card for transmitting data. The other birds with trackers have however not had problems in the .

Although Karl evidently perished on his migration the nest did not remain empty. The male that had already been inspecting it earlier appeared on April 2 and on April 4 our familiar female Kati arrived. If the previous male Karl had not had rings on his legs we would probably have thought that he had returned. The new male was called Karl II. 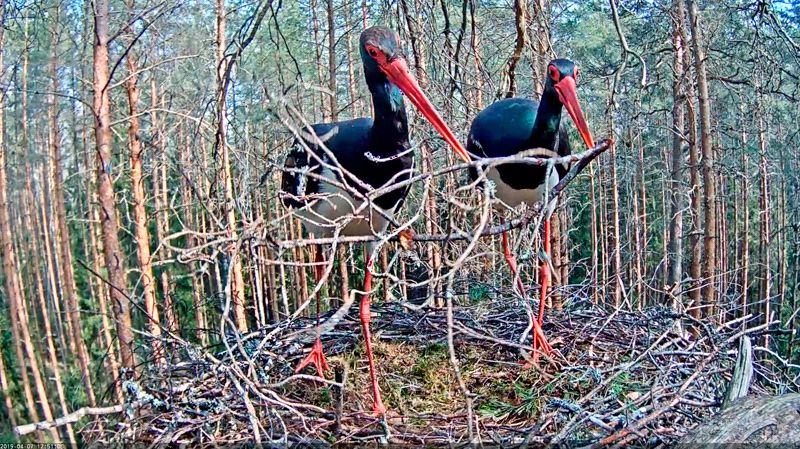 Breeding in Kati and Karl II’s nest started in the usual way, even quickly (image caught by forum member Anne7)

On April 12 we could see the first  egg in the nest and by April 18 there were four eggs there which were at once carefully incubated.

During the incubation and also later a foreign male, with Latvian rings on his legs (white 0FAF), visited the nest. According to our Latvian colleague Maris Strazds this black stork was ringed in in 2016 as a nestling by him and Helmuts Hofmanis about from the . 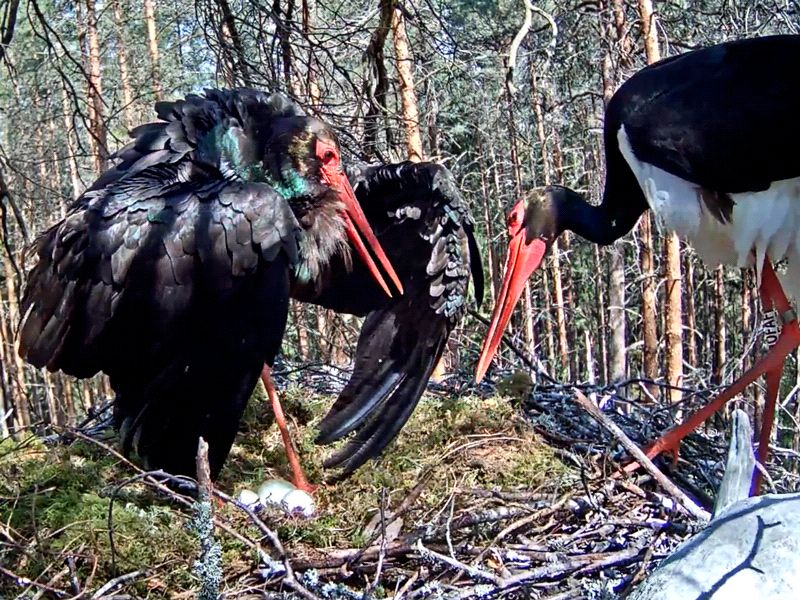 Latvian black stork  0FAF searches for a nesting territory. Incubating female Kati fends the stranger off. Where OFAF might find a suitable nesting place we maybe will not know. But it is possible that we will see him again in the future around this nest (to see the video click on the image; the video was recorded by forum member Mary Jane)

On May 16 chicks were hatched from three eggs and on the next day also from the fourth egg, It was predictable that four chicks would not remain in the nest because quite often in this nest female Kati has adjusted  the number of chicks. So also this year – on May 23 Kati removed one chick, probably the last to be hatched. But three chicks did not remain in the nest either because on June goshawk managed to drag one chick down over the nest edge as prey for itself . 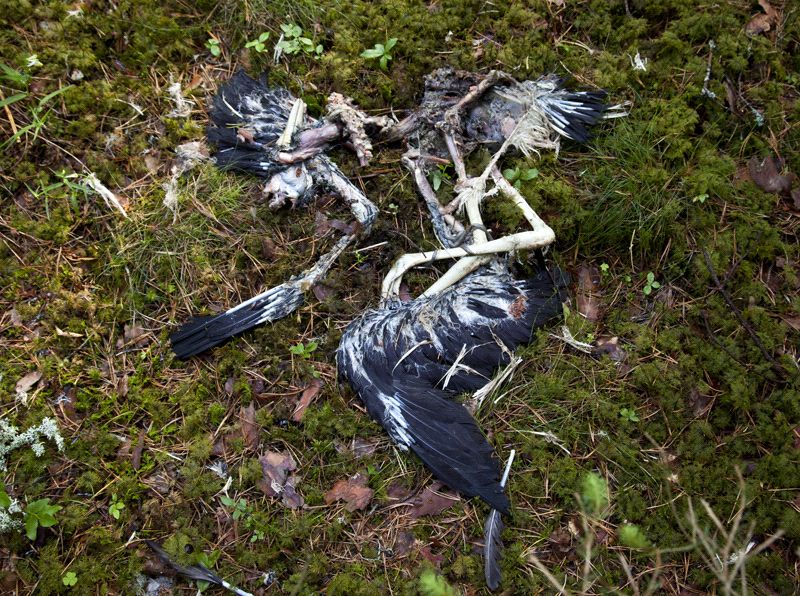 The third chick is on the ground, eaten by the goshawk. At the time both adults were out searching for food for the chicks

The two remaining chicks still had to ward off attacks from the goshawk repeatedly but managed it well. 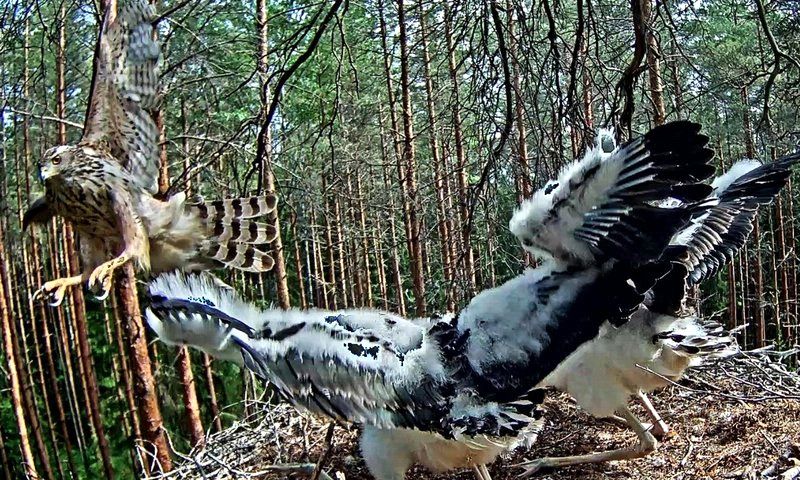 Maybe the death of the third chick was lucky for the remaining ones because the supply of food was not generous in this dry year. Evidently also last year’s drought had some effect because fish in suitable sizes and amphibians were few.

Similarly to last year, the further activities of the two juveniles can be followed by their tracking devices. The rings and tracking devices were set in place on July 12 (Ain, Mati, Ants and Urmas were in the team). Both chicks fledged. Now afterwards we know that the meager food and the goshawk attacks made the behaviour of the juveniles unpredictable. Finding the second one of them took almost an hour and a half because we were not quite prepared for its flight out. After a long search the ranger Mati managed to detect the searched-for bird peeking from behind a tree trunk; it had walked surprisingly far.

Last year voluntary fund raisers among the black stork camera watchers supported the acquisition of three transmitters, One transmitter that was returned to us after one chick last year perished in (many thanks for these logistics to Egyptian colleagues and to the Estonian embassy in ). The second transmitter we borrowed to start with from another project (we don’t know yet how we will get it back to there for the next year). In connection with this the transmitter was differently coloured – (reddish)brown. The colour of the transmitter however caused  male Karl II to behave surprisingly, he seemed to feel an enemy to be afraid of in the device. It took several days before he got used to it.

The chicks were named by the forum members, after their leg rings, numbers  and 7160, as  Aru and Oru. The young birds started flying on their own on July 23 and 22 respectively. At the same time  female bird  Kati was seen for the last time at the nest. The young birds had some time to train flying; Oru started his migration on August 10 and  Aru on August 17. For Aru this meant double food rations for several days that Aru sometimes even did not manage to eat up from male Karl who cared for the young birds. Aru’s late departure may be related to the wing injury – evidently Aru flew on a branch in a flight exercise and the lower part of the wing was abraded. It did not however stop the flight exercises .

The video summary of the nesting in Karl II and Kati’s nest has been prepared by forum member Marcus Eurok. 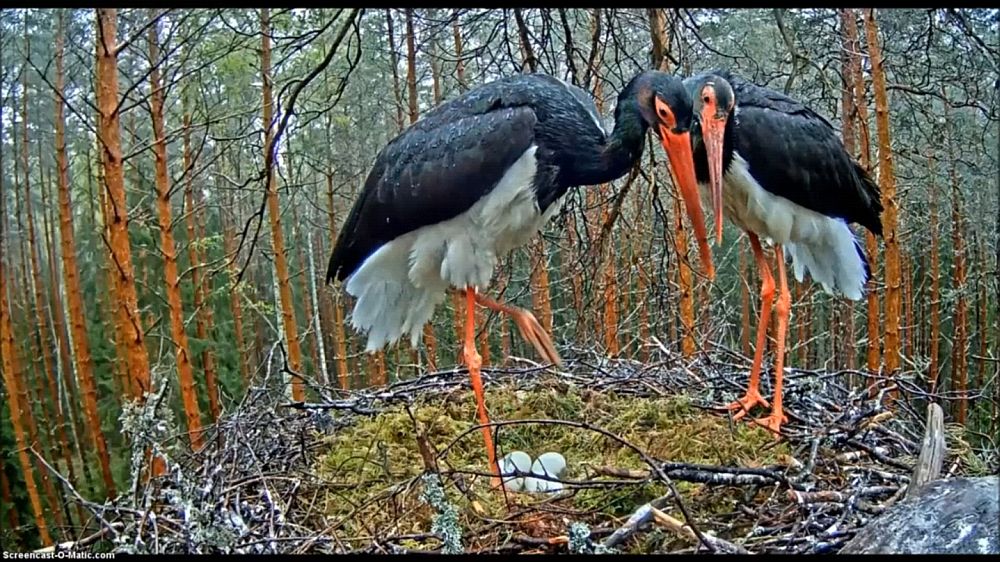 The migration of both young birds, Aru and Oru, can be followed on the migration map. At the time of making the summary both were in their first migration stopping places, Oru in and Aru in .

However, all did not work out so well for all black storks! For instance, in the nest of Eedi, traceable on the migration map and nesting nearby, there were three chicks but they all perished before fledging. The likely cause was lack of food.

In black stork nests with web cameras elsewhere the situations differed. In the Hungarian nest the young birds perished in the storms. In contrast in this year all the young birds fledged normally. In the Latvian camera nest there was no nesting.